Republicans stage massive seizures about routine intelligence-gathering, then vote to let the FBI see your browser 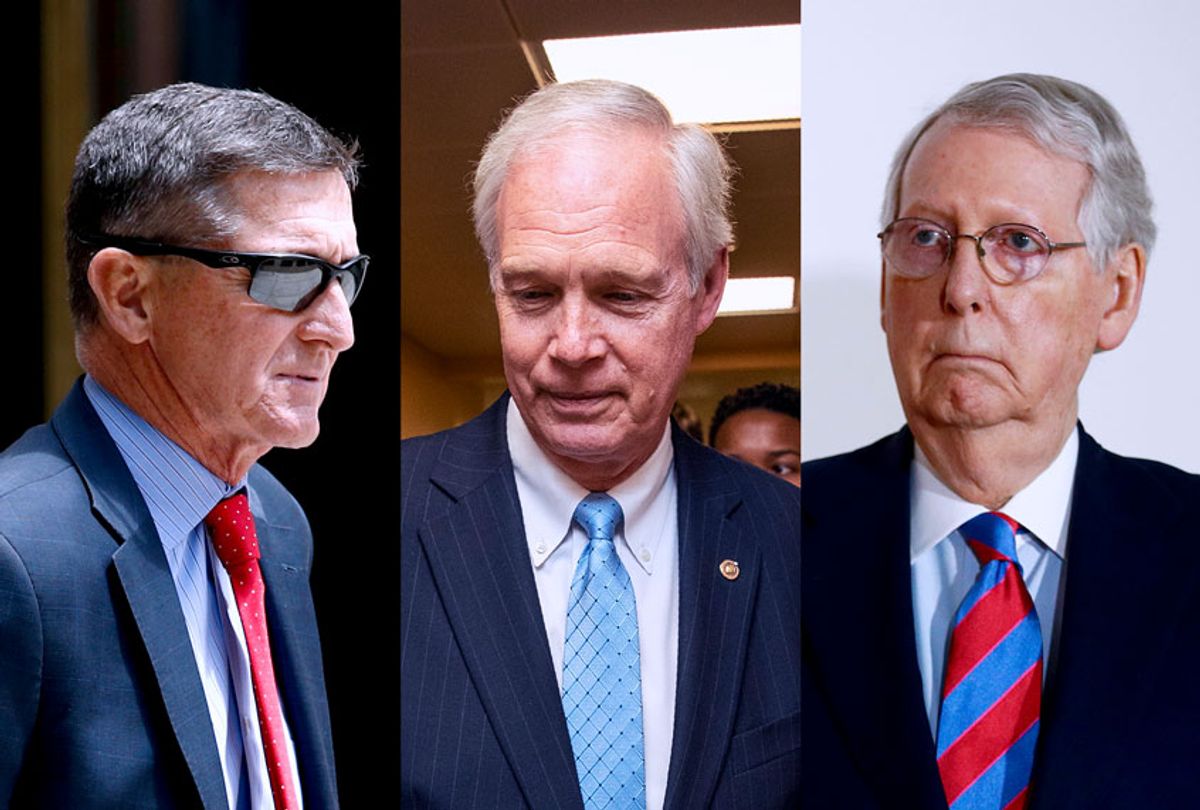 Donald Trump's antics are often analyzed as a variant of either a distraction ploy, part of a large and sinister plot, or simply the logical evolution of modern Republican politics. His latest outburst is a mix of his go-tos and is rooted in a foundational vendetta against his predecessor — the perfect red meat for the GOP base. This time, Trump's playbook allows Republicans to feign outrage over legitimate intelligence gathering while simultaneously signing off on warrantless searches of U.S. citizens' internet browser histories.

The Senate on Wednesday fell one vote shy of passing a bipartisan amendment to limit warrantless government internet searches and browsing history. The vote on the amendment drafted by Sens. Ron Wyden, D-Ore., and Steve Daines, R-Mont., came as part of Kentucky Republican Sen. Mitch McConnell's rush to renew the 2001 PATRIOT Act. The Senate majority leader, who has insisted he is in no hurry to pass new legislation to aid Americans hurt by the coronavirus pandemic and resulting economic shutdown, pushed to attach a new amendment to the PATRIOT Act which makes clear that Congress expressly permits the FBI to collect records on Americans' "Internet website browsing records or internet search history records," even without a warrant.

"The attorney general and members of Congress have worked together to craft a compromise solution that will implement needed reforms while preserving the core national security tools," McConnell said in support of the legislation. Apparently congressional leaders believe giving the federal government permission to spy on their citizens without approval from the judiciary is one such necessary reform.

The amendment to stop McConnell's expansion of power for Bill Barr's Department of Justice required a three-fifths majority and fell just one vote short, with 59 senators voting in support. The 37 senators who voted to allow such secret searches included some of the very Republicans who spent the day feigning outrage over the "unmasking" of former national security adviser Michael Flynn, who pled guilty to lying to the FBI.

In what appears to be a coordinated political effort, Barr dropped the federal charges against Flynn last week just as acting Director of National Intelligence Richard Grenell, a Republican political operative with no intelligence experience, declassified select transcripts from the House Intelligence Committee's investigation, in a move clearly meant to exonerate Flynn and Trump. Now, as Trump faces worsening poll numbers and a growing COVID-19 death toll, he has again revived his three-year-old baseless accusation that the Obama administration illegally surveilled his 2016 presidential campaign. Trump has concocted an unimaginative name for his half-baked conspiracy theory, "Obamagate," but has struggled to explain the precise nature of the accusation against the former president.

"Uh, Obamagate. It's been going on for a long time," he said at a press briefing on Monday. "It's been going on from before I even got elected, and it's a disgrace that it happened, and if you look at what's gone on, and if you look at now, all this information that's being released — and from what I understand, that's only the beginning — some terrible things happened, and it should never be allowed to happen in our country again."

Only a day after Trump stood in the Rose Garden and accused Obama of committing unspecified crimes while in office, his lawyers argued to the Supreme Court that presidents are actually immune from prosecution. That hasn't stopped some of the same GOP senators who voted to expand the powers of the so-called "deep state" from turning around and calling for heads to roll from the Obama administration for such alleged abuses.

"The unmasking of Gen. Flynn by the Obama administration regarding conversations during the presidential transition [is] deeply troubling and smell[s] of politics, not national security," said Sen. Lindsey Graham, R-S.C., chairman of the Senate Judiciary Committee, on Wednesday. The same day, Graham voted against restricting warrantless searches on U.S. citizens.

Sen. Ron Johnson, R-Wis., who wrote to Grenell and Barr to call on them to release information about efforts to unmask Flynn and on Wednesday released a list of Obama administration officials he accused of targeting Flynn, also voted on Wednesday to subject U.S. citizens to further government surveillance without a court order.

But as Wall Street Journal reporter Rebecca Ballhaus noted on Twitter: "Unmasking U.S. identities in intel reports is a fairly routine process that occurs thousands of times a year and is requested by senior administration officials to better understand the context of intercepted conversations that are being reviewed."

Trump tried and failed to force Ukraine to fabricate criminal charges against Joe Biden, his apparent November opponent. Now Trump has his cronies selectively declassifying information he can use to launch vague accusations against Biden and his former boss. For so many Republicans, their phony outrage on Flynn's unmasking is made even more ridiculous by their voting record on expanded spying powers under the PATRIOT Act.

But why did so many Democrats go along with this latest breach of civil liberties? Sen. Bernie Sanders of Vermont, for example, was one of only four senators who did not vote on Wednesday. Sen. Patty Murray, D-Wash., for example, told Politico she would have voted yes had she been present — meaning the amendment would presumably have passed.

It appears that at least some of the 10 Democratic senators who voted against the limit on warrantless searches were whipped by House Democratic leadership, who have reportedly expressed concerns that such an amendment would jeopardize the entire PATRIOT Act.

"We cannot let the perfect become the enemy of the good when key authorities are currently sitting expired and unusable," McConnell said on the Senate floor before the bipartisan vote to expand spying powers against U.S. citizens.

So while we've seen a good show from both parties in pretending to prosecute each other, "Spy vs. Spy"-style, the leaders still maintain their bipartisan support to spy on the rest of us.