There's something for everyone and every budget, from puzzles & pizza prep to scuba diving & literally being bread 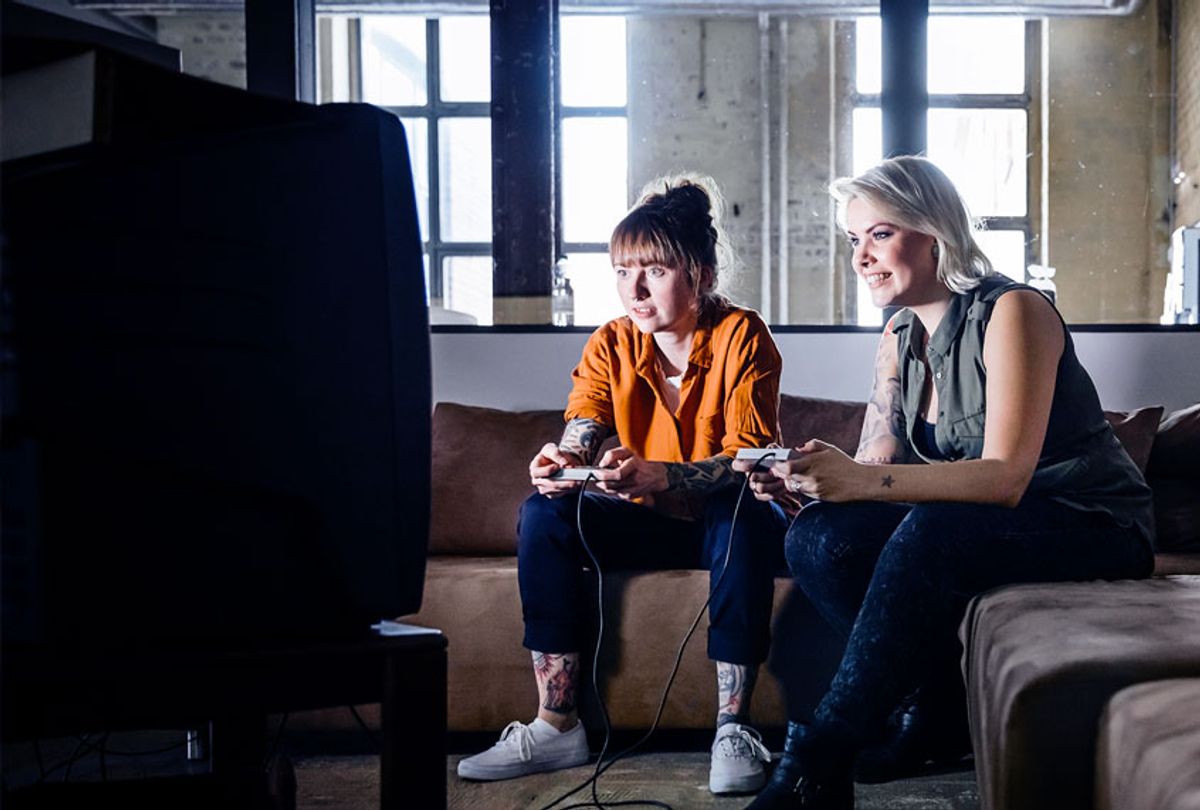 We all need a variety of activities to keep occupied at home, whether it's streaming movies, assembling a suffrage-themed jigsaw puzzle, cross-stitching our feelings of frustration, reading a good novel, or carbo-soothing with two-ingredient brownies. Video games are a fantastic way to unwind because they offer a range of activities from simple sorting tasks to more involved narrative and coordination challenges.

But while we're stuck at home for self-isolation purposes, we've been drawn to the most relaxing games, a way to truly decompress from the anxiety-inducing news cycle and worries about our family.  "Animal Crossing: New Horizons" has been a quarantine best-seller, and it makes sense why. The game is set on an idyllic island where the daily responsibilities are removed enough from the real world pandemic that it's a distinctly pleasant time-suck. The neighbors are all friendly (I guarantee you Goldie would wear a mask in public to keep others safe), food is plentiful, the stock market is turnips.

But if you've had your fill of "Animal Crossing" — or you don't have a Nintendo Switch and haven't been able to jump on that very cute bandwagon — Salon has compiled a list of other very chill videos games, available at different price points and on different platforms, that can keep you occupied while staying at home.

In this cheerful and addictive first-person food preparation game, your goal is to become a "master ovenist." At your very own pizzeria, you take customers' orders, who sometimes have a unique way of stating their preferences. Assembling the pizzas accurately is the biggest challenge, and there's an art to where you place each ingredient, while also trying to keep up with speed. Accuracy pays off, and you can upgrade your establishment as well. The customers are a bit wacky, the animation is delightful, and you can watch reports from the Pizza News Network. Just have a pie on hand because there will be cravings!

This is one of the most poignant and adorable food preparation games out there, from the super kawaii animation to the heartwarming storytelling that evolves over the course of the game. You're a Japanese grandma who runs her own restaurant while occasionally bickering with her husband who appears to be bedridden. You get to learn the names of Japanese comfort foods, and by making a certain amount according to customer orders, you can level up and unlock more complex foods. There's a certain logic to how you build a menu (everyone wants to eat rice first, then a side, etc.) in order to move product, and as you speak to repeat customers, you learn more about their stories. Some of the women's stories are kind depressing to be honest, but in the end, the game is about lonely people connecting over good food. A gorgeous strings soundtrack accompanies the game.

Ok, so this is "Animal Crossing"-adjacent, but you don't need to own a Switch to play this simple game that is essentially Memory, uncovering turned-over cards as you try to match up "Animal Crossing: New Horizons" characters. It's appropriate for any age, and offers three difficulty levels – matching four, six, or 12 pairs – depending on how much time you can devote. It's perfect for decompressing for a few minutes.

From the top, "ABZÛ" is just breathtakingly beautiful. Set in a series of underwater worlds, there is nothing simplistic about the game design. It is literally immersive, bursting with color and life by way of aquatic plants and creatures. Manta rays glide past you, while small schools of bright yellow and green fish swim in circles, whipping themselves and the tide into tight coils, only to lazily disperse and continue bobbing along.

You play as a diver who only interacts with the world around them through a series of sonic pings. The narrative is pretty loose; you're there to explore! There are simple puzzles to solve and friends to make (you can ride dolphins once you're friendly with them, for instance) along the way.

I think Justin McElroy summarized the game best in his 2016 Polygon review: "This is, if you will, a background game, and a supremely chill one to boot."

Scroll and puzzle-solve your way through the four seasons in this gorgeously composed 2-D logic game. In "Seasons After Fall," you initially play as a disembodied spirit who quickly takes on the form of a spry, young fox who travels through the forest, slowly unraveling the mysteries of the seasons' guardians. The more you learn, the more skills you master — like learning to freeze a lake once you gain knowledge of winter, which is super useful for travelling through the forest's various waterways.

Some of the puzzles are unnecessarily winding, requiring a fair amount of backtracking, but the overall game experience is really relaxed and pleasant. I would play again for the brush-stroke artwork and soundtrack alone.

Alright, this is my wildcard pick. The game is simple. You are sentient bread — a loaf, a slice, a baguette, a bagel. Whatever you choose. And depending on your form, you have a few different game objectives. Slide your way across the kitchen (without touching the floor) to reach the toaster; swing yourself around to cause as much destruction as possible; roll down a ramp at breakneck speed in a bagel race and then do it again, trying to beat your own record.

It's the kind of dumb fun that, once I chanced upon it, I knew that I needed.

In this unique game, you play as Yarny, a little creature (made of yarn, obviously) who originates from a grandmother's crafting basket. You'll run, jump and swing your way through logic puzzles — but what sets "Unravel" apart from many other puzzle platformers is its emotionally ambitious narrative, augmented by immersive landscapes and soundscapes. As you literally unravel your yarn while completing challenges, you are unraveling characters' memories and secrets.

"Unravel Two," which was developed by the Swedish company Coldwood Interactive in 2018 — two years after the original — is a multiplayer version with an equally heartfelt storyline about two young boys escaping from an abusive group home. I know that sounds like a major downer, but the game ends in triumph, and its subtle message about coming to terms with trauma and difficult memories is an important one.

Both versions are intuitive and can be played at your own pace, but offer enough challenges and side-quests (which all result in unlocking a bunch of other cute yarn creatures!) to hold players' interests even once the main narrative is complete.

This one is a no-brainer, having landed on many Best Of 2019 lists, but we really couldn't leave this off. Salon's Matthew Smith wrote about the game, "Resembling a neon-soaked pop opera, 'Sayonara Wild Hearts' follows a woman suffering from heartbreak who ends up having to restore balance to the universe by fighting representations of her past partners. She does this by riding a skateboard on an astral highway, fighting a giant mech-wolf robot and even fighting a pair of masked twins who have a giant sword." He also praised the pulsing pop soundtrack, beautiful animation, and happy message.

In this single-player exploration and adventure game, you're an anthropomorphic cat named Mae who has dropped out of college and returns to her hometown of Possum Springs, which is filled with various smart-mouthed, wise-cracking animal citizens. Although it feels like you're just hanging out with Mae's family and friends – who are all part of a band, natch – there is a deeper mystery and progression to the story. You also get to do fun stuff like drink too much beer, play bass, and bash up cars with a baseball bat (What? I find that soothing in a cathartic way!). Animation is snazzy and stylized, the themes about mental health are resonant, and the soundtrack is rocking (listen to the music on bandcamp!) But don't let the kiddos play; this is for the more mature folks who need an outlet for their disillusionment.

I am a dedicated fan of Playdead Studios games thanks to "Limbo" and "Inside" (enough so that I audibly gasped with glee when I saw on Twitter last week that the Copenhagen-based company was hiring developers for a third game).

Released in 2010, "Limbo" is a puzzle platformer presented in 2-D and black-and-white; but don't be fooled by the game's initial visual simplicity. This is easily one of the most intriguing indie games of the last decade. You play as a young boy who is looking for his lost sister amid a gloomy forest that soon transitions into a complex of whirring machines and smoke stacks, and what you soon realize is that everything in this simple world is out to get you.

There are darts, bear traps, gravity switches and giant, piercing spider legs. The solutions to the puzzles on "Limbo" are imaginative and morbid (like when you have to use a bloated corpse — only shown in silhouette — as a raft). It's all so gruesomely delightful and surprising, especially when juxtaposed with the game's sparse sound design; there are large portions of "Limbo" where all you hear are your own footsteps, perhaps punctuated by the sound of a drop of water.

"Inside," which was released in 2017, builds on what made "Limbo" great. The player controls another young boy in a dystopian world, solving environmental puzzles and avoiding death. It's dark, narrative-driven and has an unforgettable ending.