How to cover Joe Biden's flubs, flaws and failures — without repeating "but her emails" 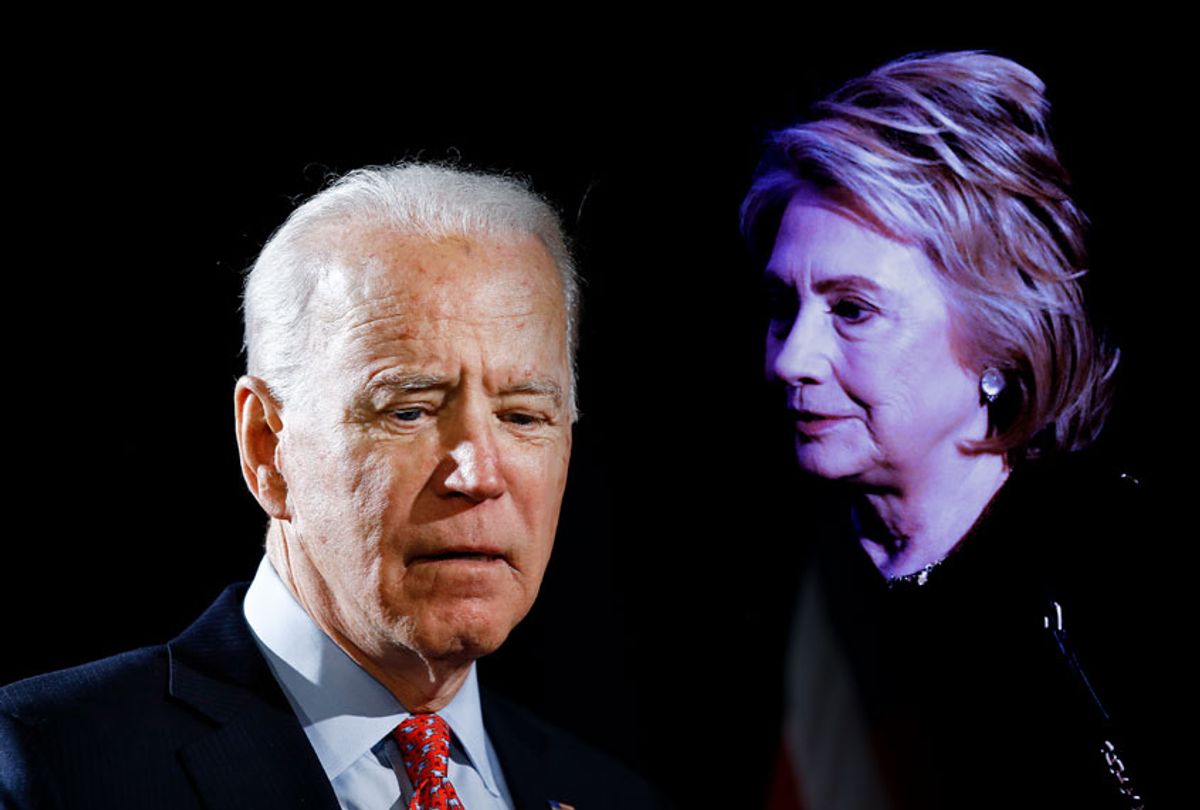 How should mainstream news reporters cover Joe Biden's frequent flubs and considerable flaws, when Donald Trump's are so much worse?

Well, they shouldn't ignore them.

But they certainly shouldn't try to equate them with Trump's, either.

Looking at the tenor and content of the coverage of Biden's jaw-dropping quip on Friday about who is and who "ain't black," I would say our mainstream news organizations got it about right.

When the presumptive Democratic presidential nominee does something that stupid and provocative, it's news — no matter who he's running against. It raises all sorts of questions about his discernment. It speaks to how the Democratic Party takes the African-American community's votes for granted.

When Biden apologized, that was news too, because it showed that he could admit he was wrong.

Most coverage by reputable news organizations prominently included some version of the crucial context, which is that, by comparison, Trump routinely says racist things, his campaign is racially divisive, and his appeal to African-American voters is for obvious reasons almost nonexistent.

There were still complaints from prominent Democrats, including two former presidential spokesmen:

But the lesson of 2016 is not to ignore the failings of the Democrat running against Trump. It's to cover them with some sense of proportion.

In the run-up to the November 2016 election, news organizations engaged in a considerable amount of critical reporting about Hillary Clinton, focusing primarily on her abuse of a personal email server while secretary of state, but also on her unseemly coziness with donors to the Clinton Foundation, and on secret reassurances that she made to major banks in her highly-paid speaking appearances.

By any reasonable journalistic standard, Trump's defects as a presidential candidate were of an entirely different scale than Clinton's. While there were certainly strong indications of Clinton's failings in a few limited areas, when it came to Trump, there was overwhelming, constantly replenishing evidence of pervasive deceit, self-dealing and corruption throughout his career and up to the present.

But in the most authoritative postmortem of 2016 campaign journalism, Harvard government professor Thomas E. Patterson concluded that Clinton and Trump coverage by the major news organizations "was virtually identical in terms of its negative tone."

"Were the allegations surrounding Clinton of the same order of magnitude as those surrounding Trump?" Patterson asked. "It's a question that journalists made no serious effort to answer during the 2016 campaign."

Similarly, a team of Harvard and MIT researchers found that coverage of Clinton's email scandal accounted for more sentences than all of Trump's scandals combined (about 65,000 compared to about 40,000), and more than twice as many as were devoted to all of her policy positions.

This was a huge and terrible mistake. Some if not most of the Clinton coverage was entirely legitimate. But in retrospect, it was wildly out of proportion. And it clearly contributed to Trump's victory.

One important explanation for this is often neglected: Pretty much no one in political media circles actually thought Trump had a chance of winning.

Since we all assumed that Clinton would prevail, the tough, insistent coverage was less about evaluating her as a candidate and more like a head start on the coverage of her presidency.

Speaking for myself at least — as Washington editor of The Intercept at the time, I wrote, guided and edited a fair number of stories that were highly critical of Clinton, particularly of her secrecy and her ties to corporate elites — my goal was not to warn voters away. It was to increase the pressure on Clinton to be more transparent and less beholden to corporate interests going forward.

The unfortunate result was that legitimate stories about Clinton were endlessly republished by the New York Times and other major news platforms, topped with minor incremental discoveries, all over the front pages, all the way up until Election Day — while Trump's failings were considered old news.

There was nothing wrong with exploring Clinton's weaknesses. The big problem was the volume. It was excessive.

This time around, do we know better?

This time around, we know better than to ignore Trump. Opinion polls again show Trump behind, but the possibility that he could win — while hard to contemplate — simply cannot be dismissed.

And these days, coverage of Trump's flaws is, for good reason, pretty much nonstop. He is making major news every day, in ways that make his incompetence, deceit and corruption constantly relevant and worth revisiting.

But what 2020 and 2016 do have in common is flawed Democratic candidates.

All of those merit greater press coverage than they have gotten so far — with one key caveat: Even granting the most negative interpretations of Biden's flaws, Trump's are worse by many orders of magnitude.

For instance, Trump's cognitive issues are clearly way more severe — he is frequently unhinged, confused, and incoherent — and they are exacerbated by a number of troubling psychological problems, most notably malignant narcissism and a complete lack of empathy. Biden might be creepy, but Trump is a sexual predator.  Biden only lies about a few things, while Trump's lies are constant. Trump's corruption is boundless and ongoing, beyond even the wildest pre-Trump imagination, and enriches both him and his family.

The danger is actually undercoverage

Writing about Biden's failings in a way that makes them sound even slightly comparable to Trump's would be journalistic malpractice.

But in a normal election cycle, problems like the ones Biden has would fuel way more media coverage than they are currently getting.

Obviously, a big factor here is that the coronavirus pandemic has relegated every other news story — even the presidential election — to the sidelines.

But even before the pandemic became big news, the corporate political media was remarkably gentle with Biden, not even asking him the obvious, tough questions. Since then, it's almost exclusively been softballs. It happened again on Tuesday, when Biden sat down with CNN's Dana Bash for 15 minutes.

The one partial exception has been coverage of former staffer Tara Reade's allegation of sexual assault — and even then, it was delayed and halting, and resulted in only gentle questioning from hosts on MSNBC.

The mainstream media's hesitation to focus on Biden's flaws is understandable. Responsible journalists don't want to create a false impression of the relative magnitude of Biden and Trump's unfitness for the job.

Heck, responsible journalists don't even want to do anything they don't absolutely have to that might help Trump get re-elected. Most of them, I suspect, recognize that Trump is a dangerous authoritarian and wildly unfit for office in almost every way, and that electing him a second time would be an act of collective national insanity.

But news reporters should never let their political or personal views blind them to the facts.

That's the difference between a journalist and a partisan: Partisans will deny or suppress true information that doesn't help their party or candidate get elected; journalists should never suppress important information, period. They should never be involved in cover-ups.

And although Biden is the presumptive nominee, he's not the nominee yet. This remains a period for testing. If Biden is a weaker candidate than people think, Democrats still have the opportunity to do something about that over the next two months. It would be better for everyone — other than Trump — if it came out now rather than later.

Finally, it's essential that Biden, if he does become the next president, doesn't get the impression that he is immune to press scrutiny. Presidents need to be held accountable, and the period after Trump should be all about restoring accountability and transparency. That won't happen with a supine press corps.

I think the coverage of Biden's "you ain't black" comment reflected some reasonable ground rules about how reporters should respond to the newsworthiness of a particular Biden flaw or flub, relative to the wildly more outrageous views, comments and actions routinely emanating from Trump. Those ground rules:

In the next few weeks, I hope to write more about how reporters can make their coverage of the 2020 election a public service going forward.

On the Trump side of the equation, I think that means tougher coverage still of his profound unfitness for the job, more exposure of all the grifting, more focus on the divisive nature of his campaign, more analysis of his demagoguery and march toward authoritarianism, and more confrontational reporting about people spreading misinformation and disinformation on his behalf. It also means greater resistance to letting him frame campaign issues on his terms.

On the Biden side, I think that means writing more about how he would govern differently, starting with his transition. That means pressing him for definitive promises to which he can be held accountable. It also means openly acknowledging his shortcomings and demanding that he discuss how he can mitigate them — for instance, with strong-minded and decisive staff and vice-presidential picks, and with vows to observe strict new ethics rules and submit to oversight from Congress, independent inspectors general and the media.

Regarding the actual process of voting, I think that means more aggressive coverage of Republican efforts to limit voting — and exposing them as duplicitous and as an anti-democratic attempt to achieve minority rule.

When it comes to Congress, I think that means demanding a commitment to a hugely ambitious slate of post-Trump reforms, which we need to start defining right now. Foremost among those should be dramatic new limits on executive power.

I'd love to hear your thoughts, either in comments or by email. To be continued!