NASA has a long history of privatizing its rocketry construction. The SpaceX launch isn't functionally different 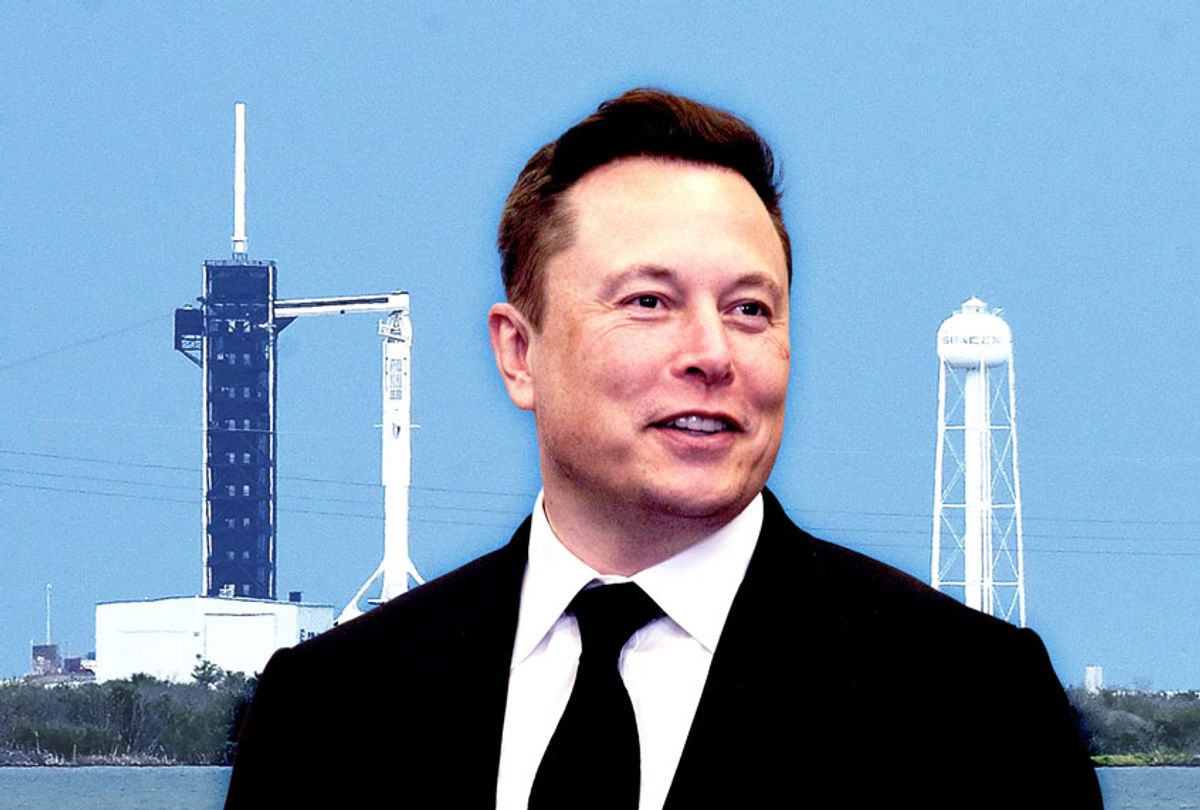 Elon Musk, and SpaceX Falcon 9 rocket with the Crew Dragon spacecraft is seen shortly before a scheduled launch at pad 39A at the Kennedy Space Center. (Photo illustration by Salon/Paul Hennessy/Echoes Wire/Barcroft Media/Saul Martinez/Getty Images)
--

Seventeen minutes before a crewed SpaceX rocket known as Falcon 9 was supposed to launch from the Kennedy Space Center in Merritt Island, Florida yesterday, the flight's weather officer decided to "scrub" the big event. According to the Washington Post, Tropical Storm Bertha had compromised their ability to safely carry out the mission, meaning everything was postponed until the weekend.

The media and space enthusiasts had been hyping the launch for weeks; CNN, Politico and numerous other outlets deemed it a "historic" moment — because, as CNN wrote, the launch of the Falcon 9 carrying astronauts in a crewed module would mark "the first time in the space agency's history" that NASA "handed over much of the design, development and testing of new human-rated spacecraft to the private sector."

For fans of NASA, space, or entrepreneur Elon Musk — who founded the American aerospace manufacturer and space transport company SpaceX — the delay marked a profound disappointment. Yet for those with a sense of the history of space travel, the upcoming launch of the SpaceX Crew Dragon was merely a minor note in an ongoing development — the privatization of space — that has dubious value at best to humanity. Certainly it is not likely to be remembered as a major event in the history of human space travel. That's because NASA's reliance on private contractors has changed little in its half-century history, aside from a few minor administrative details exemplified by this week's launch.

Privatization of space exploration and travel has been a long-term bipartisan goal of the US federal government. Indeed, private companies first entered the realm of space exploration in the 1960s, when they participated in the manufacturing of communications satellites, but it wasn't until Congress passed a law in 1984 allowing private companies to engage in their own launches that corporate space launches became plausible.

A giant leap toward the privatization of space launches took place in 2010, when President Barack Obama ordered NASA to create a program providing grants to private companies that would allow them to develop spacecraft which could transport astronauts to or from the space station. This roughly coincided with the impending retirement of the space shuttle, with NASA announcing in 2006 that it would soon need private businesses to help it transport people and cargo to and from the International Space Station in anticipation of losing its ability to perform these basic tasks on its own.

Part of the impetus behind privatizing space launches is that, from a strictly fiscal standpoint, many critics thought it was unfeasible to have the government bankroll America's endeavors beyond our own planet. During the Cold War, of course, the United States was determined to defeat the Soviet Union in the so-called "space race"; as a result, in 1966 the budget for NASA equalled roughly 4.41 percent of the total federal budget. Since 1993, however, NASA has never managed to take up even 1 percent of the total federal budget, forcing the agency to work with the private sector in order to continue performing many of its most basic operations.

That is why, as we enter a new decade, companies like Musk's SpaceX and Jeff Bezos' Blue Origin are promising to bring us into a new era of privatized space travel. But while this may seem like a good thing on paper — who wouldn't want to live in their own rocket ship? — it may be less so in practice.

"While NASA has to answer to the interests of the government and taxpayers, private companies have to take into account profitability, the interests of a variety of shareholders, and reliance on a secure contract with NASA," Lina Shi of the University of Pennsylvania's Wharton Business School wrote in 2016. "Since profitability is a major factor in a lot of decision making, programs that focus on the general development of space exploration and knowledge, but lack immediate commercial applications, may not be developed."

There are also concerns about the potential environmental impact of privatized space flights. For one thing, SpaceX's plan to put 25,000 satellites into space could have a serious impact on astronomy. Avi Loeb, chairman of Harvard's science department, told Salon last year that SpaceX's satellites could create so much reflected sunlight that they will interfere with scientists' ability to observe space from the ground.

"They are already requesting 30,000 new satellites beyond the 12,000 that were granted, and the number will grow further without any space laws to moderate the growth," Loeb told Salon. "It is essential to find a technological solution that would minimize the footprint of these satellites on telescope images (or else we will need to always avoid their predictable locations or relocate optical observatories to the Moon)."

He added, "The problem is particularly acute for the Large Synoptic Survey Telescope (LSST) which will survey repeatedly a large fraction of the sky. There is no doubt that it will be addressed in the 2020 Decadal survey of Astronomy which will summarize the priorities of the Astronomy community for the next decade."

Meanwhile, there are plenty of concerns about the carbon emissions of rocket launches in general. Smithsonian Magazine estimates that each Falcon 9 launch produces approximately 150 metric tons of carbon, meaning that they would pump 4,000 metric tons into our atmosphere every year if they achieved their goal of a launch every two weeks. Regular rocket launches would also dump chemicals like chlorine, black carbon and aluminum oxide into the atmosphere, all of which would also cause significant damage to our ozone layer.

As Dr. Martin Ross, senior project engineer for commercial launch projects at The Aerospace Corporation, told Digital Trends, regular rocket emissions "could have a more significant role in the totality of Earth's climate system than aviation CO2 emissions. But we do not know enough about rocket particle emissions to say for sure with any degree of scientific clarity. The scientific level of understanding rocket emissions is out of line with their level of potential impacts."