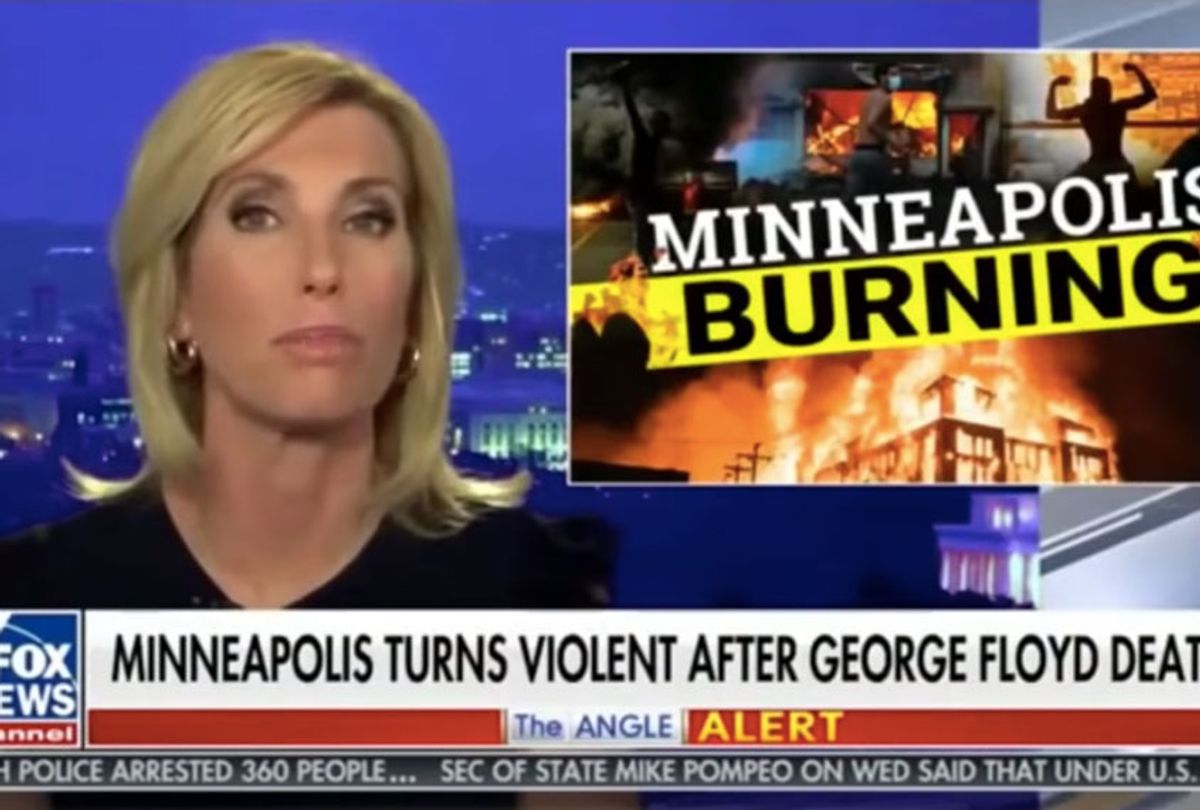 Amid a stunning outburst of racially charged unrest across the country following the death of an unarmed black man in police custody, Fox News personality Laura Ingraham — who has been called a "Neo-Nazi fan favorite" by Rep. Alexandria Ocasio-Cortez, D-N.Y.; a "white supremacist" by Rep. Joaquin Castro, D-Texas; and a "racist" and a "monster" by her own brother — assured black Americans on Thursday night that President Donald Trump's "own experience" with the "out-of-control" Russia investigation had given him an empathic understanding of "poisonous" police brutality.

As nationwide protests over the death of George Floyd boiled over into violence, Ingraham told the Fox News audience, which is almost exclusively white, that "we all need to do better."

"Now, I'm not going to pretend for a millisecond to know what it's like to be a black person in America. I don't," Ingraham, who once claimed that Martin Luther King Jr. would be a Trump supporter if he were alive today, said. "But the only thing I do know is that we all need to do better."

Ingraham then voiced her support for police as she pushed back against the notion that America was a "caldron boiling over" with racism.

"It's important that we also push back against the notion that all police officers can never be trusted or that America — just at its core — is some caldron boiling over with pure racism and inequality," she continued.

The Fox News host, who has routinely glorified armed, white anti-lockdown protesters gathered at state capitols, chided other media outlets for what she framed as incendiary coverage of Minneapolis before again prescribing the appropriate reaction.

The "real change agents in America are those who stay in their communities and build them up — not burn them down," she said.

"Rosa Parks is a beloved, global symbol of freedom and justice because of the determination and dignity to which she carried out her civil disobedience. Would burning a store have been more powerful and transformative?" she asked.

"I don't think so," she said, answering her own question.

Ingraham then pivoted to Russia.

"And to our African-American fellow citizens, I say this: Given his own experience with an out-of-control FBI and unfair investigation, given all the work on criminal justice reform, President Trump knows how poisonous and out-of-control law enforcement process can be," Ingraham said.

"We should spend more time trying to work together to ensure we have a more fair and just society," she then added.

Ingraham advised Democrats last year to focus on white voters. She doubled down on her rebuke of basketball star LeBron James in 2018, telling him and other professional athletes to "keep the political comments to yourselves . . . Shut up and dribble."

"It's always unwise to seek political advice from someone who gets paid $100 million a year to bounce a ball," Ingraham, whose net worth was pegged the year before at about half that amount, said at the time.

Nonetheless, Ingraham on Thursday ended her monologue with a conciliatory tone.

"All human beings have inherent worth, all of them are endowed by god with certain inalienable rights," she said. "From the evidence available thus far, it looks like George Floyd was denied his."

"This is really just baiting Trump, who hasn't really talked about the protests, to say something just like it," marquis New York Times reporter and reputed Trump whisperer Maggie Haberman observed.

Trump tweeted hours later that the protesters were "THUGS."

"When the looting starts, the shooting starts. Thank you!" he wrote in a tweet, which Twitter soon masked with a warning, citing glorification of violence.