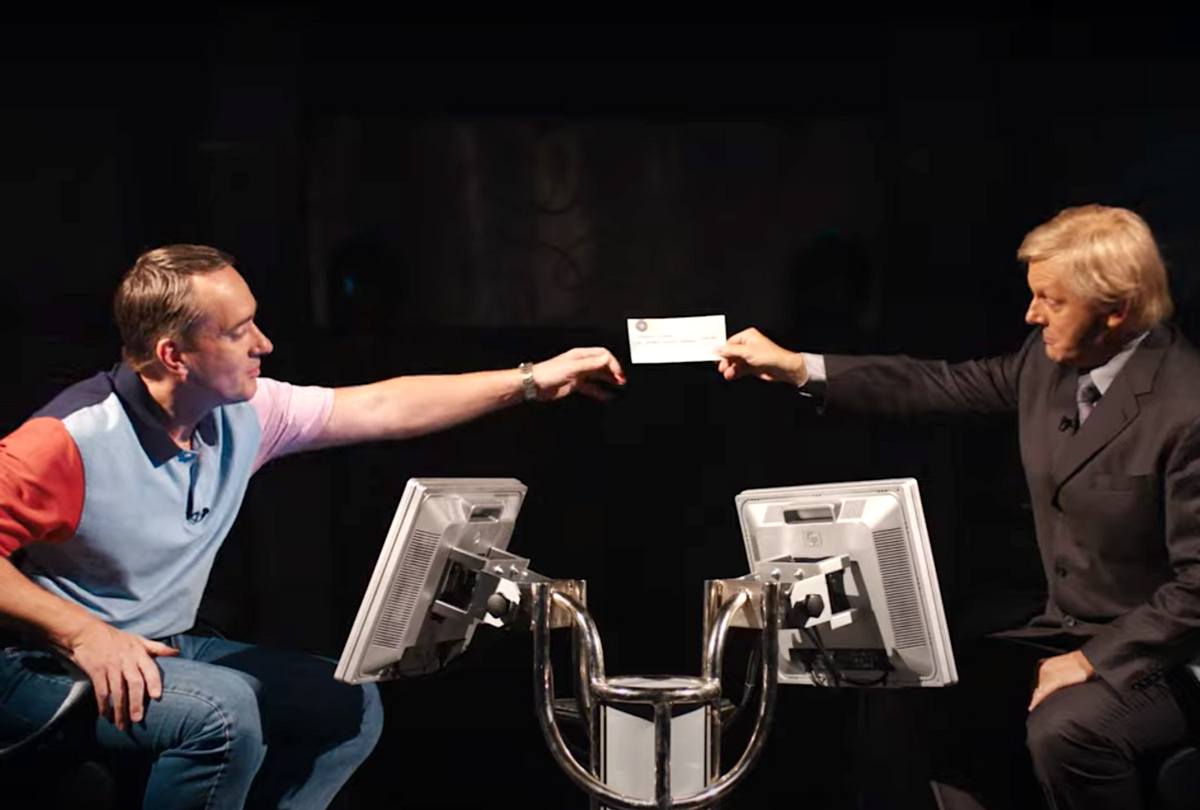 In 2001, a mild-mannered couple was accused of cheating their way to the top on the popular nail-biting game show "Who Wants to Be a Millionaire?" through strategic coughing during filming. The so-called Coughing Major Scandal rocked the country and set fire to everyone's imagination. How could something so blatant and ballsy not be discovered until after the big win?

If this doesn't sound familiar to you, it's probably because you're not from the U.K. Not only did the scandal occur in England where "Millionaire?" originated, but also around Sept. 11, when America's focus was firmly on the devastating terrorist attacks in New York. Like HBO's "McMillions" that focused on the McDonald's Monopoly game scam, AMC's "Quiz" is bringing to light one of 2001's biggest stories that made headlines but was backburnered and forgotten in the wake of 9/11.

"Quiz," premiering May 31, stars "Succession" standout Matthew Macfadyen as Major Charles Ingram, who competed on "Millionaire?" over the course of two days and walked away with the grand prize. Shortly afterward, the show's production company Celador became suspicious of his wildly erratic gameplay and began to investigate Charles and his wife Diana, who was in the audience and had previously competed on the show. What followed was a media circus that involved the show's host Chris Tarrant (portrayed here by Michael Sheen), a high-profile trial, outrageous recordings of the various coughs, and ultimately a conviction awash with public humiliation.

But that's not the end of the Ingrams' story, and "Quiz" takes the viewers on a journey that interrogates what's true and what's crafted. By the end of the series' third installment, the audience could find themselves questioning their own biases.

"Fleabag" scene-stealer Sian Clifford, who plays Diana Ingram, and playwright/screenwriter James Graham spoke to Salon about making "Quiz," how one's opinion can change within hours, and the blurring of reality and entertainment that gave rise to Trump. 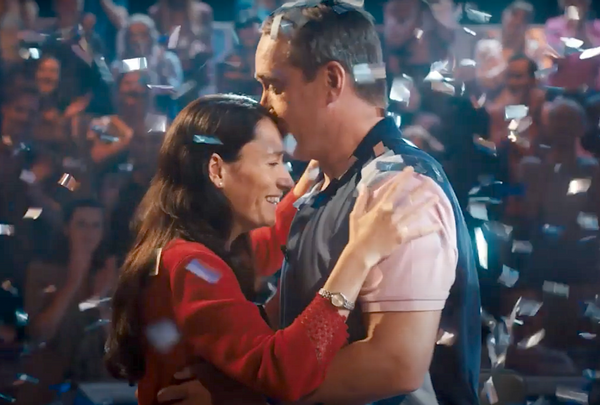 Why tell this story now?

James Graham: I was interested in the story when it first happened, I was 18 years old. I remember watching the trial progress at university with my friends, and firstly couldn't believe how obvious it was that they cheated, and completely how audacious it was to try and steal a million pounds in front of an audience with television cameras and microphones. I just thought that was the most incredible story.

Cut to 15 years later, I was given a book by a theatre producer called "Bad Show[: the Quiz, the Cough, the Millionaire Major"] by a couple of journalists that suggested possibly the story wasn't quite as we thought. There was new evidence that most of the public don't know that speaks possibly to their innocence. I just loved taking what everyone thinks to be a really cut-and-dry case of those found guilty, and using that as a way to look at all the things we're all obsessed about at the moment – about truth and post-truth, media narratives, and justice.

Sian Clifford: When it came to me, you don't have to dig very deep before you start seeing the holes in this story and realizing the human cost, and that my perception of it was entirely constructed by the media. And when you star picking at that, you unravel a world that's just fascinating, somewhere in between truth and perception.

James, you first wrote this as a play, and I heard that you had the audience vote on the Ingrams' guilt or innocence during the show. But their opinion sometimes changed?

Graham: We did it twice. We took the paraphernalia of the show; everyone got a pad, and we asked the audience, "Innocent or guilty?" We did that at the interval after we presented the case for the prosecution. And on every occasion. It was about 80% guilty, 20% innocent. And then on every occasion when we did the vote again, at the end of the Second Act, we converted [the audience] to innocent – sometimes significantly. It would be quite high. Sometimes . . . it would get quite close. Weirdly, and I don't know what this means, but in the matinees we'd never converted them though. They [voted] guilty both times. But in the evening shows, they always went from guilty to innocent.

So when you are adapting the play into a three-part series, how did you decide to structure it in the way you did?

Graham: We kept the basic principle, which is the idea that we're going to present the story that you think you know, which is in and of itself, an incredible story. It's like an "Ocean's 11" with questions and with middle-class people. It's not as sexy but it's still as exciting. It's quiz geeks who are attempting to rob the biggest show on by cheating through coughing. And so just telling that story I thought would be exciting enough.

So you present that to an audience that thinks that's what happened, but still hopefully compelled them with all the details they didn't know. For example, there was this whole syndicate that managed to hack the show with hundreds of contestants. And actually we'd been learning more about that as we made the show. So some of some of the things we reveal in the show is new information that's never been published before.

[Celador managing director] Paul Smith, who we've kept in touch with throughout the show, had learned that information while we're making this program that 10% of his giveaway as "Millionaire" went to this syndicate . . .  It's like the hole in the Death Star that Luke Skywalker found, and it was the most valuable asset the network had, and there were these fundamental weaknesses that meant a certain network of very well-to-do, middle-class dweebs were allowed to find vulnerabilities into it and get their people on the show.

Towards the end of the second episode, once you've told the stories you think you know, as the defense case kicks in, you start to undermine that perceived narrative. 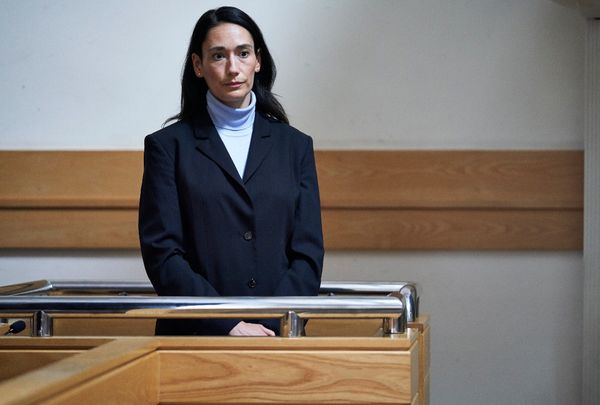 Sian, to make this work, your character must not be obviously performed as an outright villain or an innocent martyr. There must be doubt in the audience's mind throughout. How did you approach playing that?

Clifford: I just have to play the truth of what was written. And it was really important for me to get away from how she was portrayed by the media. They portrayed her as kind of Lady Macbeth. I don't think that's who she really is, and honestly, I just had to go on intuition. I watched a ton of footage of her obviously, and to me she was someone who was a quiz nerd, who was very naive and innocent.

What's beautiful about the sort of unraveling of this story is when they're interviewed by the police or the the choices that they make that ultimately end up incriminating them further come from such a deep place of innocence and a lack of understanding of how the justice system works. And so they make enormous mistakes because they think they genuinely didn't think they'd done anything wrong. And so they sort of dig themselves into this hole. . .

There were times where we would play around and play guilty and then play innocent, but actually, watching it back, there are takes that I know that were guilty takes, but they don't read guilty. Everything reads ambiguously. It's all on the audience. So whatever you're projecting, whatever your feeling is about them, that's what you're going to see. Confirmation bias.

Whether the Ingrams are guilty or innocent, why do you think this story blew up so much? It's just a game show after all.

Graham: The Martin Bashir documentary ["Who Wants to Be a Millionaire: Major Fraud"] got as many or just a slightly less views than the funeral of Princess Diana. It just swept the nation and a third of the country were watching this and talking about it.

I think it's the perfect storm of a huge part of pop culture in the form of the game show and a cheating scandal, which everyone loves and wants to see cheats brought to their knees and brought to justice. Even though actually they're not very rich, but they present themselves from the military as being quite well-to-do. In our country, we have this issue around class; there are similarities with what just happened with Meghan Markle. We have a culture in the U.K. of bringing people of status down to their knees.

Clifford: Yeah, we just want to bury you.

Graham: Yeah. So I think all that combined together at a time when so many shocking and aggressive things were happening around the world [at that time], it was a useful bit of entertaining distraction. 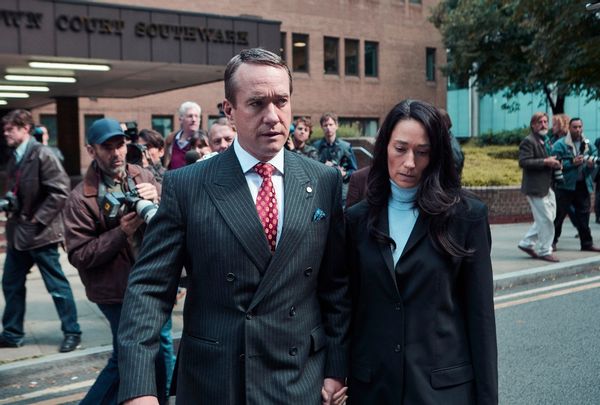 After doing this project, do you view the world and news stories with more suspicion about what's presented as truth? Do you hold onto doubt until you hear more about the other side?

Clifford: One of my favorite scenes in the show is a scene between Paddy Spooner [from the syndicate] and Paul Smith. I remember reading a script and I started to cry over it. He says, "The bottom has fallen out of the truth market."

I think it's so important that we are examining that at this moment in time. If you're someone who considers yourself on the right side of history, then you're questioning everything. I don't look at anything as one-sided however it's presented, whoever it's presented by – in the press, on Twitter, on whatever. I feel like we're at this sort of critical moment. I don't know how we solve it, but I'm thrilled to be part of a project that's just dancing with that subject matter.

And looking at where it began, the seed of this, and where we've arrived at this moment in history – maybe it was 9/11, maybe it was something that led to 9/11 – but politically, how things shifted after that time and where we've ended on now, I think it's not a coincidence.

Graham: I totally agree. There's just something that started happening around that time, starting with this quite odd small English trial and its place within everything. When you think when 9/11 was happening, and then the consequent invasion of Iraq and Afghanistan, and how that coincided with the huge explosion of entertainment coming to news, and reality television becoming entertainment, and the boundaries of fiction and fact starting to merge, you don't have to try too hard to see how 16 years later, a reality TV star, a character becomes president of the United States.

And where it is now – regardless of your politics – it has become impossible to for any of us have any certainty about what is real and what is not. You know, the trial of the Coughing Major didn't birth Donald Trump, but . . . I think it was the genesis of something, where fundamental certainties – about this is news, this is drama, this is entertainment, this is justice – began to blur, and we can't disentangle ourselves from that now.

Clifford: I just rewatched "Succession" the second series on the plane over here. And there's a brilliant scene with Matthew's character, Tom Wambsgans, and he's talking the news. "It's – it's what's new, it's the new thing. It's all the news." And this is it; this is what it's become. When did [the news] stop being about informing people and just being a television show?