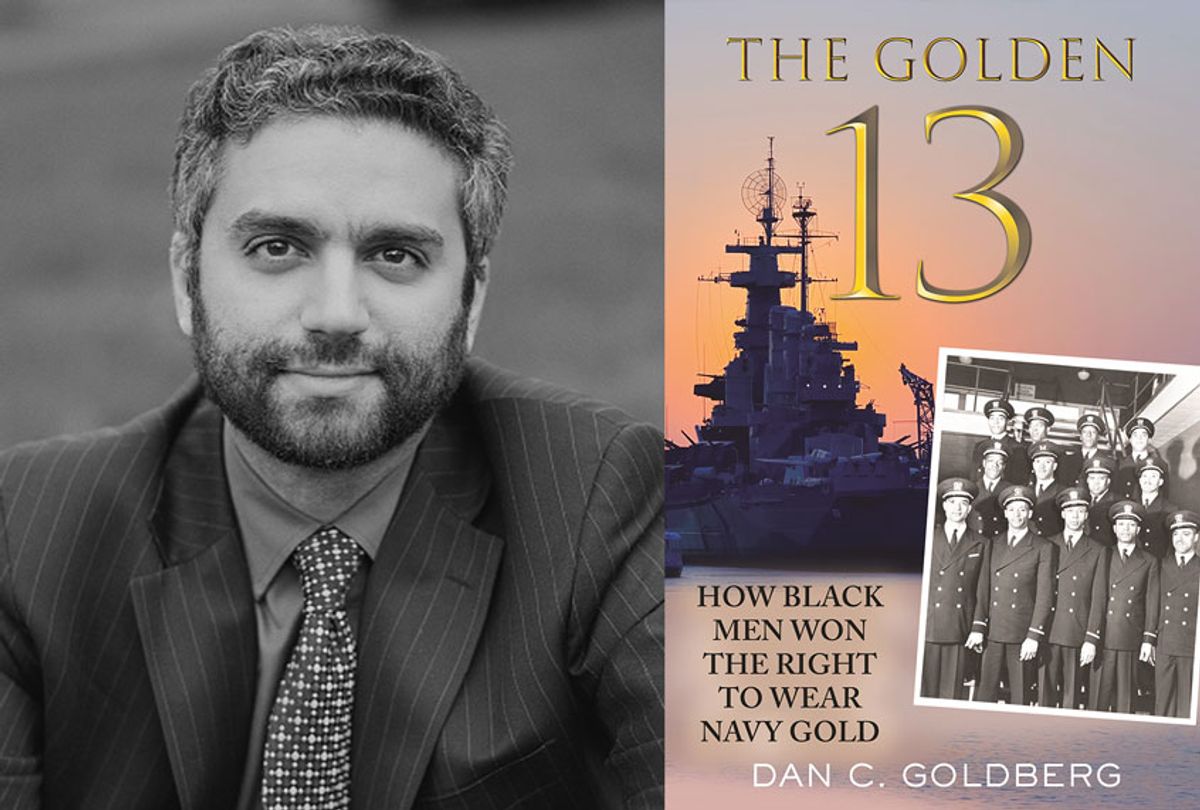 Excerpted from "The Golden Thirteen: How Black Men Won the Right to Wear Navy Gold" by Dan C. Goldberg. Copyright 2020. Excerpted with permission by Beacon Press.

It all looks so familiar. The images broadcast around the world of buildings in flames, of protesters confronting police clad in riot gear may be in response to recent events but they are also part of a uniquely American long-running series, the extension of riots and protests that date back generations.

Nearly 80 years ago, at the height of World War II, police brutality, mob violence and the pervasive belief among African Americans that the government did not value their lives led to racial tensions so fierce that riots spread across the country, threatening war production and national security at a time when Americans were told that only a united force could defeat fascism.

Then, as now, critics of the president felt he was indifferent to their suffering and more concerned with alienating his base than using the Bully Pulpit to bring the country together.

The theme that ties these protests together across generations is not one incident — but rather one incident that happens again and again.

During World War II, local police murdered black soldiers in Columbia, South Carolina and Little Rock, Arkansas. Little more than a month after Pearl Harbor, military police in Alexandria, Louisiana, attempting to arrest a black man, triggered a race riot, during which 28 black men were shot. Nearly 3,000 black men and women were detained in the city's "Little Harlem" section. The city's entire supply of tear gas was used on black soldiers, almost all of whom were from the North, principally New York, Pennsylvania, and Illinois.

If an African American soldier or sailor didn't personally experience the bigotry, he could read about it in the black press. A "U.S. Army uniform to a colored man makes him about as free as a man in the Georgia chain gang," one soldier told the Baltimore Afro-American. "If this is Uncle Sam's Army then treat us like soldiers not animals or else Uncle Sam might find a new axis to fight."

Just a few weeks after Alexandria, the black press screamed the story of Cleo Wright, a 30-year-old cotton mill worker in Sikeston, Missouri, who allegedly assaulted a white woman and stabbed the arresting police officer. Wright was shot during the scuffle but survived. On Sunday morning, a mob of more than 300 grabbed Wright from his jail cell, tied him to the back of a maroon-colored Ford, and dragged his near-naked body through the black section of town. They stopped to force his wife to view his bloodied body. Then they doused him with gasoline and set him on fire in front of two black churches, where the pews were filled with men, women, and children who had come for services.

Truman Gibson, Hastie's aide, commented that so many black men were bludgeoned to death in the South that it would only be a "slight exaggeration to say more black Americans were murdered by White Americans during World War II than were killed by Germans."

The following year, deadly rioting broke out in Beaumont, Texas and Detroit, Michigan where, in early June, more than 25,000 white workers went on strike after the Packard Motor plant promoted three black men to work on the assembly line beside white men. One striker shouted, "I'd rather see Hitler and Hirohito win the war than work beside a n***er on the assembly line."

On June 20, a 90-plus degree day, nearly 100,000 men, women, and children went to Belle Isle, a municipal park on an island in the Detroit River, seeking relief from the sweltering heat.

The first interracial fights began around 10 p.m. Soon groups of white men and black men were fighting on the lawn adjacent to the naval armory. White sailors joined the fracas, fueling the hostilities.

Shortly after midnight, at a bustling nightclub in the heart of the black community, a well-dressed black man carrying a briefcase stopped the music, took the microphone, and said he had an important announcement to make. There was fighting between the races on Belle Isle; three black people had already been killed, and a black woman and her baby had been thrown over the Belle Isle Bridge and into the river. He urged everyone in the club—nearly a thousand people—to go home and get their guns. Now was the time to fight. In the white community, someone said a black man had slit a white sailor's throat and raped his girlfriend.

Neither story was true, but both were believed.

By 2 a.m., hospitals were reporting that they were receiving one new patient every minute. Twenty-five African Americans and nine whites were killed, and more than 750 were injured before the riot, the worst of the era, ended.

Letters poured into the White House demanding federal action, and Walter White, head of the NAACP, begged the president to intervene, to marshal the nation as he had done so many times before when a national crisis threatened to overwhelm the republic.

"No lesser voice than yours can arouse public opinion sufficiently against these deliberately provoked attacks, which are designed to hamper war production, destroy or weaken morale, and to deny minorities, negroes in particular, the opportunity to participate in the war effort on the same basis as other Americans," White wrote. "We are certain that unless you act these outbreaks will increase in number and violence."

But the White House made no move, paralyzed by fear of making the situation worse. For every concerned voice that demanded the President intervene to stop Jim Crowism and call for racial equality, there was an equally concerned voice saying it was the very push for racial equality that was causing all these riots, and that Eleanor Roosevelt, in her never-ending quest to promote black men in the factories and the fields, in the Army and the Navy, was responsible for the national discord.

"It is my belief Mrs. Roosevelt and Mayor [Edward] Jeffries of Detroit are somewhat guilty of the race riots here due to their coddling of negros," John Lang, who owned a bookstore in Detroit, wrote in a letter to FDR. "It is about time you began thinking about the men who built this country."

The Jackson Mississippi Daily News declared the Detroit riots were "blood upon your hands, Mrs. Roosevelt" and said she had "been . . . proclaiming and practicing social equality. In Detroit, a city noted for the growing impudence and insolence of its Negro population, an attempt was made to put your preachments into practice."

Inside the White House, the thought of devoting a Fireside Chat to the subject of race riots was deemed "unwise" by the president's counselors. At most, Attorney General Francis Biddle argued, the president "might consider discussing it the next time you talk about the overall domestic situation as one of the problems to be considered."

Roosevelt thought even that too much, and when he gave a Fireside Chat on July 28, one month after the Detroit riots, he devoted not one word to race.

In August, another large riot began—this time in New York City—when Margie Polite, a 35-year-old black woman, was arrested by Patrolman James Collins for disorderly conduct outside the Braddock Hotel on 126th Street in Harlem. Robert Bandy, a black soldier on leave, intervened. He and Collins scuffled, and at some point Bandy allegedly took hold of Collins's nightstick and struck him with it. Bandy tried to run, and Collins shot him in the left shoulder.

The incident was like a spark to kindling on a hot, sweaty night in the city, the kind where the air is thick and humid, and tempers rise to meet the mercury.

Men and women sitting on their fire escapes seeking relief from the stifling heat climbed down the ladders and formed a mob. They lived in those overstuffed, sweltering tenements because of the color of their skin, because the city wouldn't let them leave the ghetto. They were packed into apartments like animals, and now that they were ready to die so that the best ideals of their country might live their countrymen beat and slaughtered them like animals.

The Harlem Hellfighters, the black men who made up the 369th Infantry Regiment, had been sending letters home from Camp Stewart in Georgia in which they told friends and relatives, often in graphic detail, of the gratuitous insults and violence they endured. Harlem's black press reported on how soldiers were beaten and sometimes lynched in camps across the South. Residents knew of the riots in Detroit and Beaumont. They knew that airplane factories on Long Island, even though desperate for workmen and -women, would not "degrade" their assembly lines with African Americans.

It took 8,000 New York State guards and 6,600 city police officers to quell the violence. In all, 500 people were arrested — all black, 100 of them women. One week later, when the New York Times examined the causes of the riot, it declared that no one should be surprised: "The principal cause of unrest in Harlem and other Negro communities has been [the] complaint of discrimination and Jim Crow treatment of Negroes in the armed forces."

Dan C. Goldberg is an award-winning journalist for Politico and the author of "The Golden Thirteen: How Black Men Won the Right to Wear Navy Gold."