Trump says his faith has "maybe" grown: "From the standpoint that I see so much that I can do" 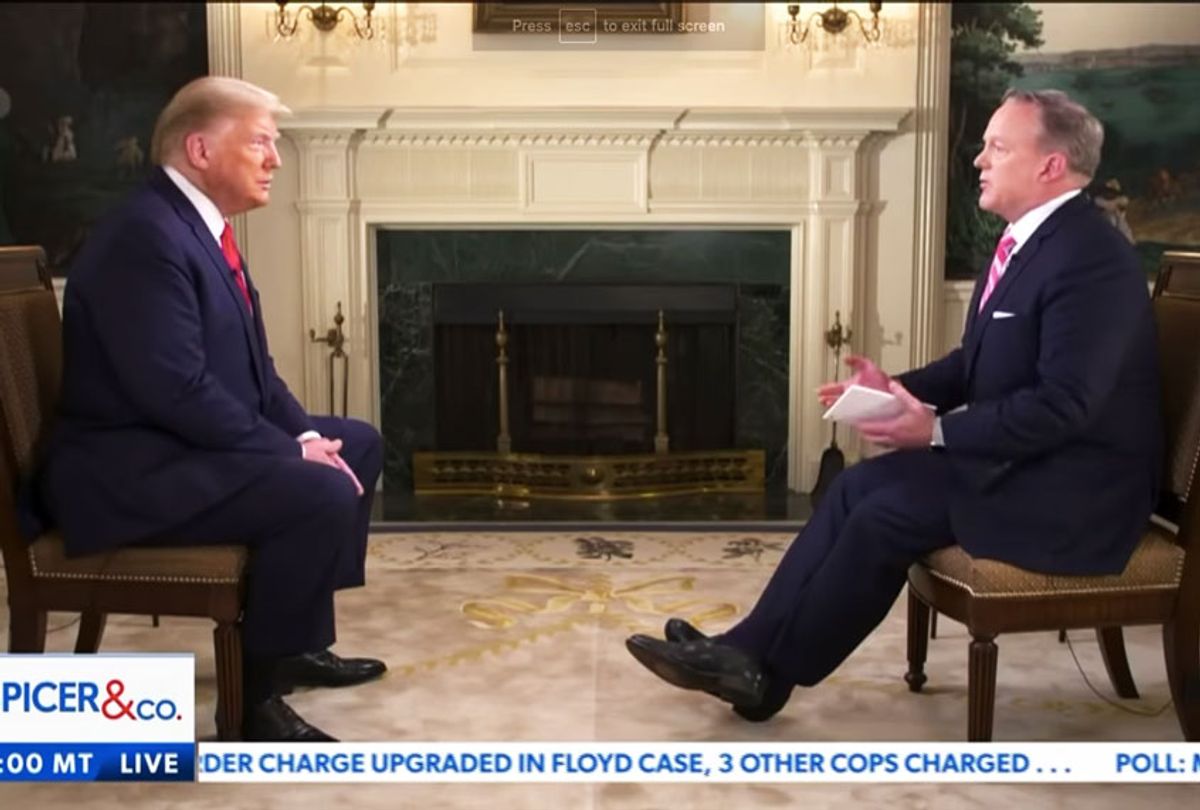 "It was a terrible thing — never should have happened. Something snapped, I think, with the policeman and the other three watching it. I guess you can't put it in the same category, but it was certainly in a very bad category," the president told his first White House press secretary turned TV host.

"Nothing good comes out of that," he added. "No, it was a very bad thing."

Chauvin was filmed kneeling on Floyd's neck with his hand in his pocket. Floyd, in handcuffs, repeatedly said he could not breathe and begged for help from his dead mother. Chauvin has been charged with second-degree murder.

The president laced into Minneapolis' Democratic Mayor Jacob Frey, a white man, for crying over Flody's death. A nationwide outpouring of grief erupted into the most explosive bouts of civil unrest which the country has seen in decades.

"Super-liberal mayor. He was crying," Trump said. "It's not nice, but the mayor can't cry in cases like that."

"We have a very different attitude on things. I am law and order — they're not. If they're not for law and order, you're going to lose the country," he told his first press secretary, who went on to write a book in which he describes Trump as "a unicorn, riding a unicorn over a rainbow."

The president characterized the individuals protesting racial injustice as hypocrites amid the social distancing guidelines necessitated in recent months by the coronavirus pandemic.

"We want to be back to normal, but it's a little bit soon," Trump said. "But I watch these protesters — and they're the ones all claiming social distancing and everything else — it's really interesting."

"They do that — and then they're jumping on top of each other by the thousands when they're screaming, and ranting and raving, which is not a good thing," he added.

Spicer also asked Trump about the events surrounding his Monday evening photo-op at St. John's Episcopal Church, which he claimed had been "handled very well" by authorities.

However, according to The New York Times, the photo-op was masterminded by first daughter Ivanka Trump.

The president also tried to distance himself from the decision to unleash tear gas, rubber bullets and flash-bang shells to clear out peaceful protesters so he could be photographed holding an upside-down Bible where they had been standing.

"The military moved them back. I guess they just reported there were no — what do you call them? The rubber bullets. There was none of that used. They just moved them back," Trump told Spicer.

Spicer admitted on national TV to defending the president's falsehoods to the American people for months, beginning on the first day of the administration over the crowd size at Trump's inauguration.

"They didn't know until just shortly before that I was going there. Somebody suggested — I said, 'Let's go. Let's walk.' And we walked from the White House, and I think everything was handled very well," Trump said.

"I will tell you," he added. "Religious leaders loved it."

But religious leaders such as the bishop of the Episcopal Diocese of Washington condemned the assault, in which two priests were gassed.

When Spicer asked Trump if he had "grown in his faith" during his first term, the president said: "I think, maybe I have, from the standpoint that I see so much that I can do."

"I've done so much for religion," Trump added.

In a 2018 appearance on the "Today Show," Spicer reflected on Trump's controversial relationship with the truth.

"Look, he's the ultimate salesman," the Republican said. "I think he talks about it in his books how he uses hyperbole to sell issues and that's how he his — he's a salesman, and a negotiator and a businessman first and foremost."

You can watch the full Trump-Spicer interview below via YouTube: