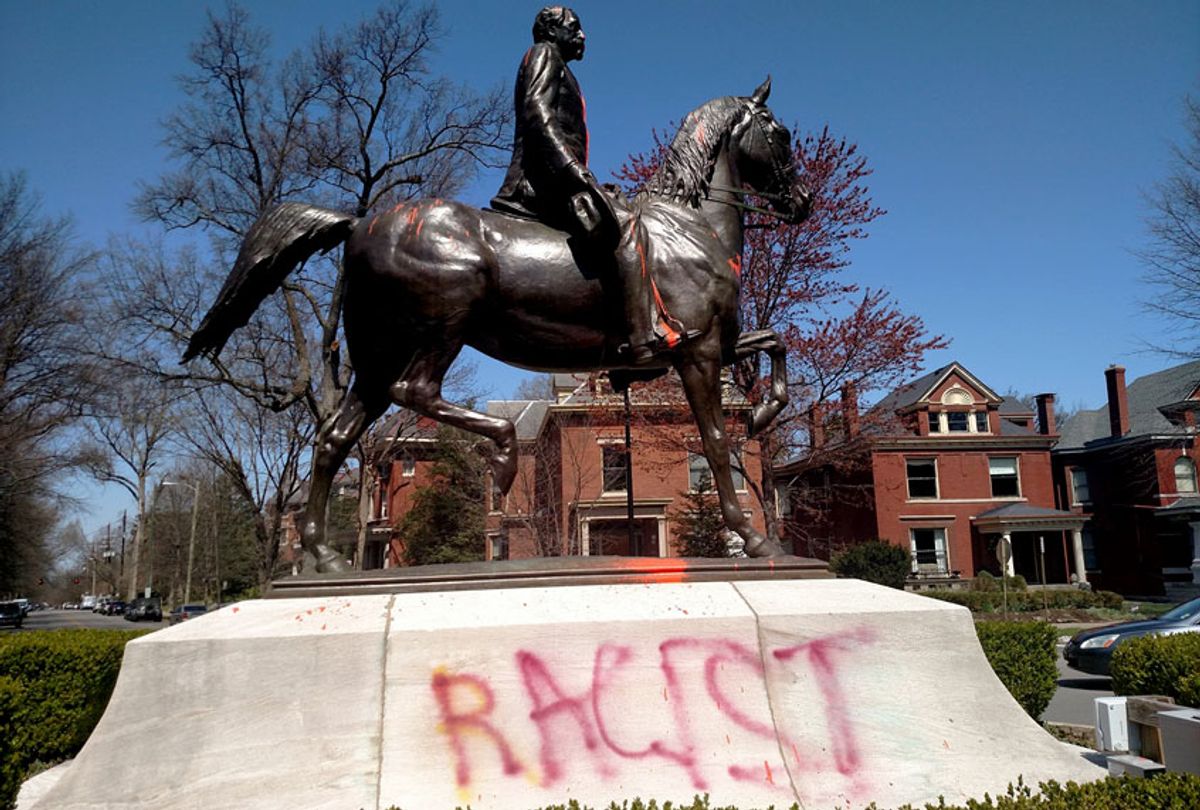 The Castleman statue in Louisville, Kentucky, after it was vandalized in 2018 (Ashlie Stevens)
--

Early Monday morning, a fleet of white trucks and a crane parked in a circle around a well-manicured roundabout, surrounding the statue of John Breckinridge Castleman in Louisville's Cherokee Triangle neighborhood. To some, the monument may just look like a man on a horse, but many residents vividly remember when protesters gathered in August 2017, holding up "Black Lives Matter" signs and chanting "Mayor Fischer, take it down, take it down."

Castleman's background, including his service in the Confederate Army, came under scrutiny after the violent white supremacist rally in Charlottesville, Va. held just weeks before.

Now, as the city of Louisville is entering its second full week of protests surrounding the killings of George Floyd in Minneapolis, and Louisville's own Breonna Taylor, a 26-year-old Black woman who was fatally shot by Louisville Metro Police Department officers, and David "YaYa" McAtee, a 53-year-old Black barbecue stand owner fatally shot by LMPD officers and the National Guard, Louisville Mayor Greg Fischer announced that the controversial statue was finally being removed.

In a statement, Fischer said, "The events of the past weeks have shown clearly that it's not enough just to face our history – we've got to address its impact on our present.

"Too many people are suffering today because the promises of justice and equality enshrined in our Constitution are unfulfilled by a society that devalues African American lives and denies African Americans justice, opportunity and equity," Fischer wrote. "That's got to change."

But in acknowledging the need for community and countrywide change, that means that Fischer himself would have to change, too. Thus far, however, the halting path to the statue's ultimate removal serves as an illustration of a mayor whose response to issues of racial justice tends to lapse into a holding pattern of inaction to avoid conflict, which has clearly been brought into plain view as a city still cries out for justice for Breonna Taylor.

All across the southern United States, cities from New Orleans, La., Birmingham, Ala., and Atlanta, Ga., have grappled with their Confederate statues, and just last week, Virginia Gov. Ralph Northam announced the removal of the city's monument to Robert E. Lee. Even protesters in the United Kingdom toppled a statue of slave trader Edward Colston into the River Avon in solidarity with the Black Lives Matter protesters.

Louisville removed a 70-foot-tall monument to two fallen Confederate soldiers on the University of Louisville's campus in 2016, but to many the Castleman statue felt different. He was a complicated community figure: he served in the Confederate army, was subsequently pardoned and served in the United States Army, went on to help establish the city's park system, and was the founding president of American Saddle Horse Association.

Like all of us, he was the sum of his parts, but which part of Castleman was this monument honoring? And given the fact that he opted to be buried with his casket draped with both the American and Confederate flags, meaning that he obviously didn't renounce the mission of the Confederacy, did he deserve honor at all?

While Fischer took that question through a series of city-organized panels and monument committees, protesters of the statue took to the streets; the Castleman statue was vandalized multiple times (enough times that when I worked for Louisville's NPR affiliate, I created a timeline of Castleman vandalism). It was splashed multiple times with orange paint, spray painted with the words "traitor" and "racist," and then again, months later, with the phrases "house homeless" and "no borders."

This took place over a period from August 2017 to November 2018. The city spent $8,200 after the initial vandalism to clean and restore the statue, but made no attempts at complete restoration after that. Regardless, the statue stayed in its place.

This was a glaring contrast to the actions of Lexington, Ky. Mayor Jim Gray, who announced immediately after the Charlottesville rally that he would take action to remove two Confederate-era statues from the lawn of a former city courthouse.

Community meetings showed a city divided on how to reconcile its history with its purported values. In 2011, Fischer signed a resolution committing to a multi-year "Compassionate Louisville" campaign — making Louisville an international compassionate city, the largest city in America with that distinction. Was keeping the Castleman statue up a compassionate act? Chris Reitz, one of the monument committee members asked this question a different way in a 2019 meeting: "It seems to me that the only way we can do this is to ask the question, would we install this monument today?"

On May 9, 2019, Louisville's landmarks committee voted 5-3 to remove the Castleman monument. The plan was to remove the statue from its pedestal and place it in the nearby Louisville cemetery where Castleman's body is buried.

But immediately after that, the "Friends of Louisville Public Art,"  a collective of local historians and residents, filed an appeal, citing perceived procedural errors that allowed "for the erroneous decision of the Landmarks Commission to allow the removal of the statue of Castleman, once a U.S. Army General, and his American Saddlebred horse, Carolina."

Again, the statue stayed in its place – until Monday morning when it was finally lifted by a crane onto the bed of a flatbed truck, which took it to an undisclosed storage facility for cleaning.

Now, the city is faced with the empty platform where Castleman used to be and residents have already started debating what should go in its place (though, Sarah Lindgren, Louisville Metro's Public Art Administrator, said any new proposal for artwork or monuments on public property would have to be reviewed through the city's public art guidelines).

Some would like to see the space occupied by the work of a local Black sculptor like Ed Hamilton, whose most famous work, "The Spirit of Freedom," is a memorial to Black Civil War Veterans in Washington DC's Shaw neighborhood. Others would like to see it serve as a place to debut rotating works of modern monumental art, much like the work of Philadelphia's Monument Lab. But for now, the pedestal remains empty. (Well, almost empty.)

Other communities are having to grapple with what the absence of these monuments means to their members. At Duke University, president Vincent E. Price removed a statue of Robert E. Lee from the campus' chapel; nothing was put in its place.

As the Washington Post reported, the dean of Duke University Chapel, the Rev. Luke A. Powery said filling that hole with another figure could mask what's missing, giving the impression that problems had been resolved.

"That open space is also an opening," he said, "toward the possibility of healing and hope in the future."

In the immediate future in Louisville, however, the open pedestal serves as a pressing visual reminder of Fischer's  lack of response to the deaths of Breonna Taylor and David McAtee. None of the three officers involved in Taylor's fatal shooting have been suspended, fired or arrested; none of the officers involved in David McAtee's death had their body cameras turned on. It took nearly three years for Fischer to comply with his community's chants to "Take it down." How long will it take for him to respond to cries for "Justice for Breonna and David"?