"It's a children's show. Got that, Bobby? America is a very bad place, and it's your fault" 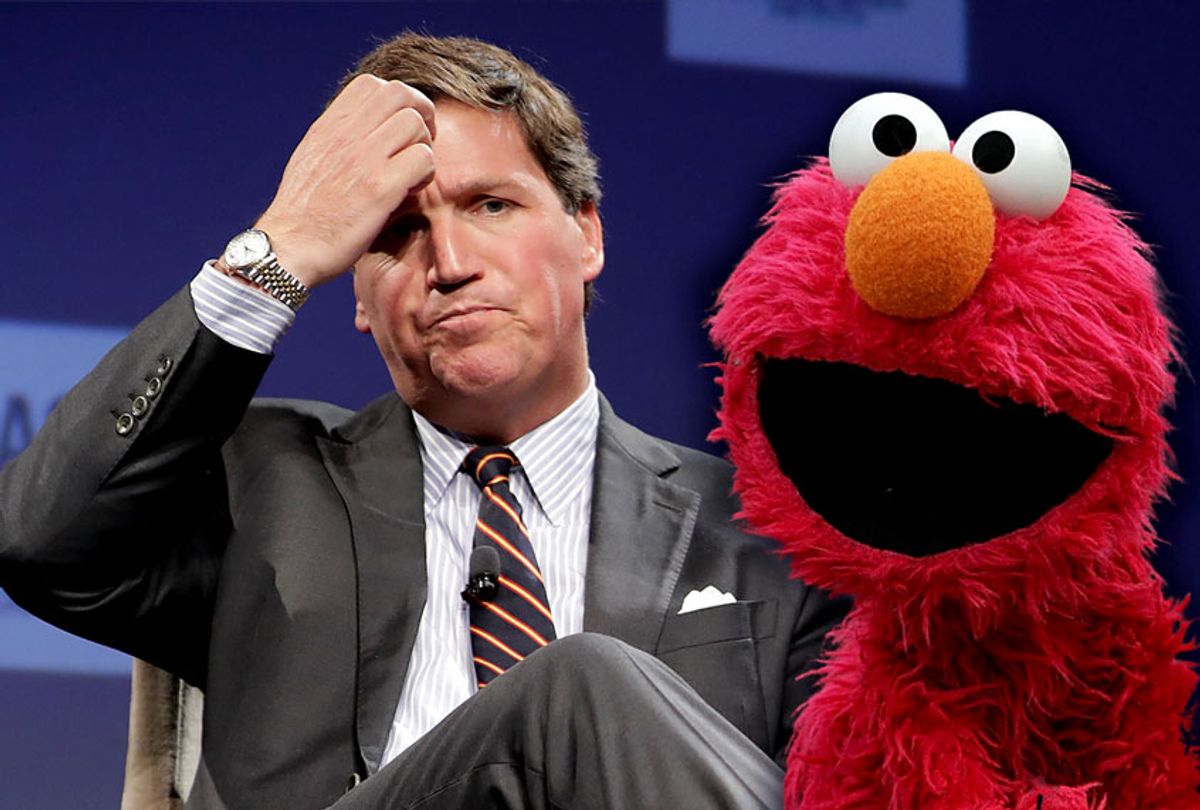 Carlson, who says he went into journalism when a career with the CIA did not pan out, drew fierce backlash Monday after firing off a race-baiting 30-minute screed against Black Lives Matter and supporters of the social justice movement. The rant would go on to make #TuckerCarlsonIsARacist trend on Twitter.

"This may be a lot of things — this moment we are living through — but it is definitely not about black lives," he told his mostly white audience. "Remember that when they come for you. And at this rate, they will."

He returned to those those remarks one night later.

"Minutes after we said that, the mob came for us — irony of ironies. They spent the last 24 hours trying to force this show off the air for good. They won't succeed in that, thankfully," he said. "We work for one of the last brave companies in America, and they're not intimidated. We're grateful for that."

But Fox News was forced to clarify what Carlson had "clearly" meant by his remarks.

"Tucker's warning about 'when they come for you' was clearly referring to Democratic leaders and inner-city politicians," a network spokesperson explained in an email to The Washington Post.

"You don't have to apologize for crimes you didn't commit," Carlson said Tuesday. "You have the absolute right to say exactly what you believe is true — that is your birthright. Now is the time to affirm that right out loud."

The primetime host, who recently dubbed the nationwide protests over the death of George Floyd in police custody "a form of tyranny," went on to claim that "faceless political agitators who exist primarily online" have "immense power over all of us."

That "mob," he told viewers, is trying to "cancel your rights" and "eliminate our centuries-long tradition of tolerance . . . and free expression."

Carlson, whose stepmother is an heir to the Swanson frozen food empire, said that "the country's defenses have been badly weakened by decades of relentless propaganda" designed to "make us feel that we have no right to stand up for ourselves, to stand up for our country, we are too sinful to resist, that we deserve whatever we get. Shut up and take it, America."

Though Carlson said "we could spend days showing you examples" of that type of propaganda, the "very latest" example was "Sesame Street."

Carlson then played a quick spot of CNN's recent Sesame Street town hall on racism for children, in which Elmo and his dad had the following conversation:

ELMO'S DAD (holding a sign that says "Love Justice Peace"): I'm bringing this sign to the protest at the community center later.

ELMO: Oh, well, they look upset. Are the protesters sad?

ELMO'S DAD: They are sad and upset, and they have every right to be, Elmo. People are upset, because racism is a huge problem in our country. Across the country, people of color —  especially in the black community — are being treated unfairly because of how they look.

Carlson quipped, "It's a children's show. Got that, Bobby? America is a very bad place, and it's your fault. So, no matter what happens, no matter what they do to you when you grow up, you have no right to complain. That's the message, and it starts very young."

The host then wondered where this all "ends up."

One example which came to mind, he said, was the fate of L.A. Galaxy soccer player Aleksandar Katai of Serbia, who was cut from the team after his wife, who is also Serbian, posted a screenshot to social media of two New York police officers driving through a crowd of demonstrators. A caption in Serbian read, "kill the s—s!"

Carlson characterized the post as "criticism" of the "looters she was watching wreck Minneapolis — a lot of people felt that way."

"Katai's wife wrote in Serbian, which she speaks," Carlson said. "And yet someone noticed them, anyway, and attacked them for writing them."

Katai captioned another photo of a man holding Nike shoeboxes as "Black Nikes Matter." In a third post, she described protesters as "disgusting cattle."

The Galaxy denounced the posts, and Aleksander Katai posted a lengthy apology on Instagram calling them "unacceptable."

"These views are not ones that I share and are not tolerated in my family," he wrote.

Carlson, who once called white supremacy a "hoax," said without evidence that the Galaxy had "forced" Katai to add the last phrase.

"At this point, we're becoming North Korea," he said. "We now believe in blood guilt. We punish people for the sins of their relatives. We don't allow individuals to have private thoughts. We hurt anyone who disagrees with orthodoxy. We demand that the innocent plead guilty to things we know they didn't do, and then read their confessions in public to prove they've been reeducated and then we brag about doing all of this."

"Obviously, something terrifying has descended on America, and it's easy to see if you stand back and see what has happening," Carlson continued. "Terrible ideas suddenly have free reign. Why? Because no one pushes back."

"No one in charge has the stones to disagree," he claimed. "So the rhetoric gets crazier and even more destructive. 'Kill the police!' OK, what next?"

Fox News has not yet released a statement clarifying Carlson's Tuesday remarks. The network did not immediately respond to Salon's request for comment.