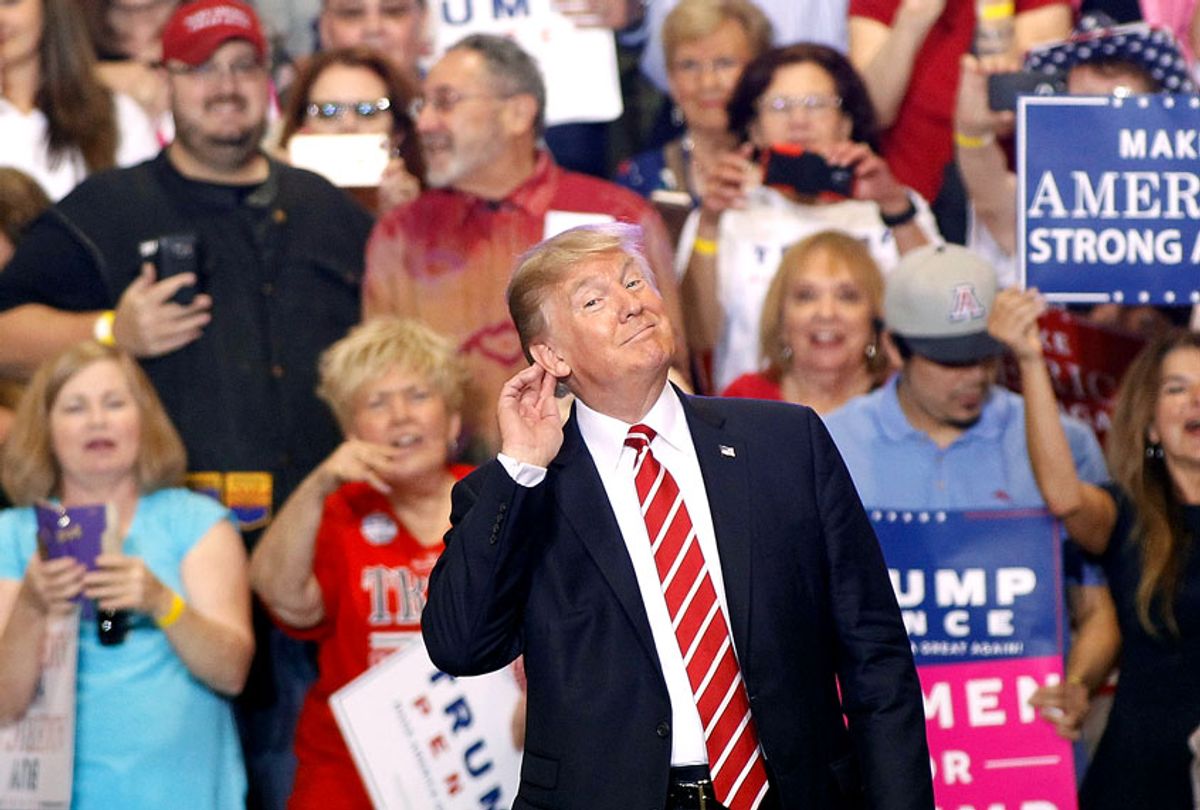 President Donald Trump will force attendees of his upcoming rally to promise not to not sue him if they contract the new coronavirus at the event.

Trump announced his first campaign rally since pandemic lockdowns began this week, which will be held June 19 at the 20,000-seat BOK Center in Tulsa, Okla. The event's reservation page contains a waiver where attendees acknowledge they will be voluntarily taking on "an inherent risk of exposure to COVID-19":

By clicking register below, you are acknowledging that an inherent risk of exposure to COVID-19 exists in any public place where people are present. By attending the Rally, you and any guests voluntarily assume all risks related to exposure to COVID-19 and agree not to hold Donald J. Trump for President, Inc.; BOK Center; ASM Global; or any of their affiliates, directors, officers, employees, agents, contractors, or volunteers liable for any illness or injury.

It is unclear if the campaign will require rally-goers to follow administration guidelines about wearing masks or physically distancing themselves from each other while inside.

The rally, Trump's first since March, also coincides with Juneteenth — or Jubilee — the anniversary of the day in 1865 when the last slaves in the country, located in Texas, were notified that they had been freed by the Emancipation Proclamation two years earlier.

Tulsa, however, is home to the 1921 Tulsa Race Massacre, one of the most brutal attacks in U.S. history, when mobs of white people killed as many as 300 Black people and set fire to 30 city blocks. That winter, about 9,000 Black Tulsans lived in tents.

"I'm speechless. That day is the day those people in Texas found out they were free," CeLillianne Green, historian and author of the book "A Bridge: The Poetic Primer on African and African American Experiences," told the Washington Post. "The juxtaposition of the massacre of black people and Juneteenth, the delayed notice you are free, is outrageous. Juneteenth symbolized our freedom."

In response to criticism about the scheduling, White House press secretary Kayleigh McEnany said: "The African-American community is very near and dear to his heart. At these rallies, he often shares the great work he has done for minority communities."

The Tulsa rally will celebrate steps the country is taking towards reopening the economy after weeks of lockdown orders put in place to curb the spread of the new coronavirus. It will also undoubtedly be a celebration of Trump himself, who reportedly did not adjust well to the isolation and social restrictions required of him amid the pandemic.

"He's frustrated," Stephen Moore, Trump's pick for the Federal Reserve before a history of sexist comments and outstanding child support payments surfaced, told The New York Times. "It's like being hit with a meteor."

Trump's daily briefings, which for a while afforded him uninterrupted time to preen and attack the press on live national TV, were the best available substitute for the rallies he so craves.

"They might have to sign a release saying you're not going to sue me if you get the flu from this appearance, so they're going to be handing out some of those releases," Kilmeade said, referencing the coronavirus as "the flu," a form of misinformation network colleagues have peddled in the past.

"Should be interesting," he added, "and how much spacing is out there, because it'll be the template going forward."

Earhardt, whom Kilmeade has recently needled after she expressed concerns about her "very sick" mother, later posed the question to Republican National Committee chairwoman Ronna McDaniel in an interview about Trump's decision to accept the nomination in Jacksonville, Fla., after the Democratic governor of North Carolina refused to commit to suspending social distancing guidelines.

"Brian mentioned something earlier — that people might have to sign releases saying, "If I get COVID, basically I'm not going to sue,'" Earhardt, who once complained that coronavirus shutdowns might endanger her au pair's visa, said. "Is that true?"

McDaniel did not answer.

"We haven't even gotten there yet," she said. "I mean, as you can imagine, we've got 74 days to plan a whole new celebration in a different city. But, of course, we want to put the safety of convention goers first and foremost."

The coronavirus has killed 113,899 Americans, according to the latest data from Johns Hopkins University. Some states which began reopening last month have seen surges in new cases, including Arizona, Florida and Texas.