With affordable housing already scarce, Oakland is poised for a post-pandemic homelessness boom

Without rent relief for California tenants, housing advocates fear the pandemic will worsen the homelessness crisis 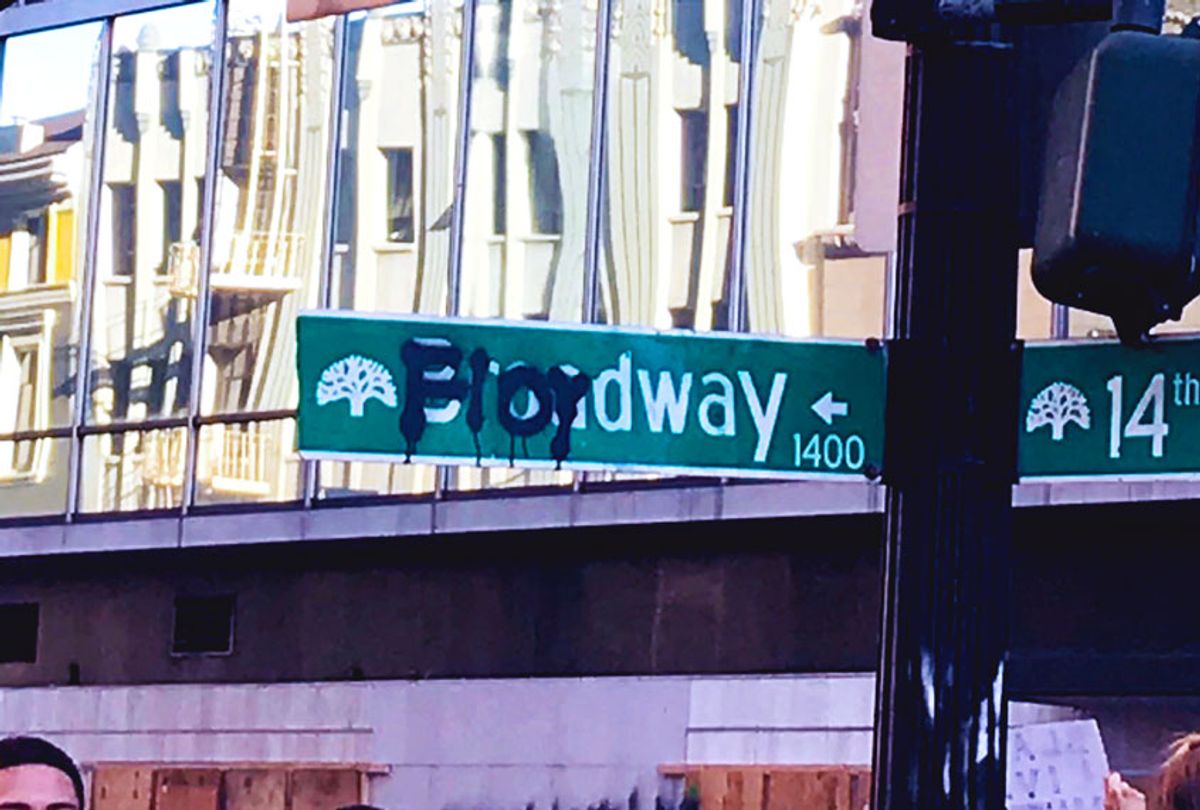 A street sign on Oakland, Calif. graffitied over to say "Floydway", seen during protests over the the death of George Floyd. (Nicole Karlis)
--

Amid the pandemic, many cities and counties adopted eviction moratoriums as a stopgap to prevent evictions and therefore homelessness. Yet as both everyday Americans and politicians grow weary of lockdowns, many public health experts and activists fear what will happen when these ordinances lift.

The end of the eviction moratorium is particularly grim in cities like Oakland, California, where economic inequalities were already severe before the pandemic. In 2018, a United Nations report described Oakland's homelessness crisis as "cruel and inhumane."

Oakland's moratorium terminates on August 31st, and tenants will be responsible for paying back rent that they missed payments on in the intervening months. Hence, in a city where the average rent is $2,300 for a one-bedroom apartment, a tenant could be responsible for paying $10,000 or more in back rent once the moratorium lifts. For someone who has been unemployed for months, and may have already been struggling financially, paying back-rent could be an impossible feat. The moratorium prohibits most evictions related to COVID-19, but tenants could still be taken to small claims court by their landlords or face eviction if they cant pay rent after August 31.

Dominique Walker, an activist for Moms 4 Housing, a collective of homeless and marginally housed mothers in Oakland and a chapter of The Alliance of Californians for Community Empowerment (ACCE), said many members are on a rent strike right now, and they won't be able to pay the rent when the moratorium expires.

"Their pay has been reduced, or their hours, things like that . . . . they cannot afford to pay, and if they can't afford to pay now they're not going to be able to pay [this debt] later," Walker told Salon. "If we don't have some type of debt elimination, we will see the homeless population rise here in the Bay Area."

Walker said there are about 100 members organized with Moms 4 Housing who face this reality. Outside of Moms 4 Housing, there are likely thousands more. According to data from the Labor Market Information Division, the number of jobs in the East Bay decreased by 169,400 between March and April, down to 1,007,400. A majority of those job losses were in the leisure and hospitality sector, which is least likely to hire any time soon. These conditions are primed to worsen a historic housing crisis that was already trending up. Between 2014 and 2019, the number of homeless people living in Alameda County doubled, which is precisely why housing advocates are asking for more reasonable measures to keep a rush of potentially thousands of people from losing their homes in September.

It's certainly a concern that keeps other advocates up at night. Jonathan Russell is the associate director of programs for homeless and housing services at Bay Area Community Services (BACS), which provides behavioral health and housing services. Russell described the moratorium as a "levy" that's "pushing the waves back a few feet."

"There are expectations that landlords are supposed to help people, you know, kind of get on rent payment plans," he told Salon. "We know that at the end of the day that means [that] without further protections or expansions to those temporary stays from the courts . . . we will be seeing a wave of inability to pay and eviction action from landlords."

This is not only an issue in the Bay Area. According to the Urban Institute, between March 25 and April 10 half of renters between 18 and 64 surveyed across the country reported having trouble paying rent or their bills. The same survey found that low-income Black and Latinx adults were most likely to report reduced spending on food, delaying major purchases or using up savings and increasing credit card debt. In Los Angeles, tenants have twelve months to pay back rent, a slightly longer timeline for a large debt. New York Governor Cuomo announced a three-month moratorium on evictions in March; as the expiration loomed in May, he extended the statewide rent moratorium to August 20th, but only for people on unemployment or facing coronavirus-related "financial hardship."

Other municipalities are looking at different housing crisis proposals. On Tuesday, the San Francisco Board of Supervisors approved a measure to permanently ban landlords from evicting tenants who failed to pay rent due to the COVID-19 crisis. The bill must still be approved on a second reading, and it doesn't relieve tenants of having to pay back missed rent;  landlords can pursue this in small claims court. While 97 percent of SF tenants paid May rent, that may not be true of June. California state lawmakers are eyeing a bill that would ban evictions for not paying rent during the pandemic. Still, all of this legislation requires that back rent be paid, rather than outright cancelling rent.

Margot Kushel, MD, who is the director of University of California–San Francisco's Benioff Homelessness and Housing Initiative and has cared for the homeless population for 25 years, told Salon that preventing another wave of homelessness is a huge concern of hers. She said she's particularly worried that the pandemic will lead to more homelessness, particularly worrisome given that shelters are not as safe for the immunocompromised, and governments have already exhausted their emergency funds because of the pandemic.

"The day those are lifted, there are projections that we will see dramatic increases in homelessness," Kushel told Salon, noting that the housing crunch in the Bay Area may encourage landlords to evict. "People are more likely to evict when they have someone else who can pay rent," she added.

According to an analysis conducted by Dr. Brendan O'Flaherty, a professor of economics at Columbia University, homelessness could increase by 40 to 45 percent this year if unemployment continues to increase. In California, the estimate is 30,000 more homeless people in one year.

On Thursday, the U.S. Labor Department said more than 1.5 million Americans filed new state unemployment claims last week, bringing the national total to more than 44 million people who have applied for state jobless benefits since mid-March. While this week's report marks the lowest number since the crisis began, some fear the worst is yet to come. In cities like Oakland, California, where economic inequalities have already been worsened by gentrification, tech wealth, and the housing crisis, the city is certainly at a pivotal moment in which the number of homeless people could surge. On the other hand, the city certainly has an opportunity to set a precedent for the rest of the country.

Walker of Moms 4 Housing, who identifies as "housing insecure," says the organization, which was critical to extending the eviction moratorium in Oakland to the end of August in May, has actions planned to demand full rent relief. That ties into the national movement to defund the police.

Indeed, Walker has been organizing for the last year since she's personally struggled to find stable housing in Oakland. After moving back from Mississippi, she had two kids and two jobs —organizing with the Alliance of Californians for Community Empowerment in Oakland, and delivering for Postmates— and couldn't find permanent, affordable housing. Walker moved back because her partner had become violent. Sometimes she stayed with relatives outside of Oakland, often an hour or more away from the city. Eventually, after finding other moms who were going through similar struggles, Walker and fellow moms occupied 2928 Magnolia Street in West Oakland in November, which made national headlines. But Walker and the moms were evicted by the Alameda County Sheriff's Office — a police action that was reported to have cost the county $40,000, far greater than the comparative cost of housing them. Police officers arrived in an armored tank wearing riot gear.

"We want to defund them," Walker told me. "The militarized eviction that they did on Moms 4 Housing, that money could have been redirected to house folks."

Currently, all the moms are temporarily housed, but they are still campaigning for permanent housing.

"We're still campaigning for all the moms to be permanently housed, and also a training program — because you have to make $40.88 an hour to be able to afford a basic one-bedroom apartment here," Walker said. "We want to have a job training program that gives moms the skills to make enough to afford a place here, that's also another issue."

Correction: A previous version of this article stated: "Hence, in a city where the average rent is $2,300 for a one-bedroom apartment, a tenant could be responsible for paying $10,000.00 or more in back rent by September 1 or face eviction." Tenants can't be evicted for not being able to pay rent during the emergency, per the eviction moratorium.