"It's a quiet revolt": Filmmaker on how "The Last Tree" moves between Black and white spaces 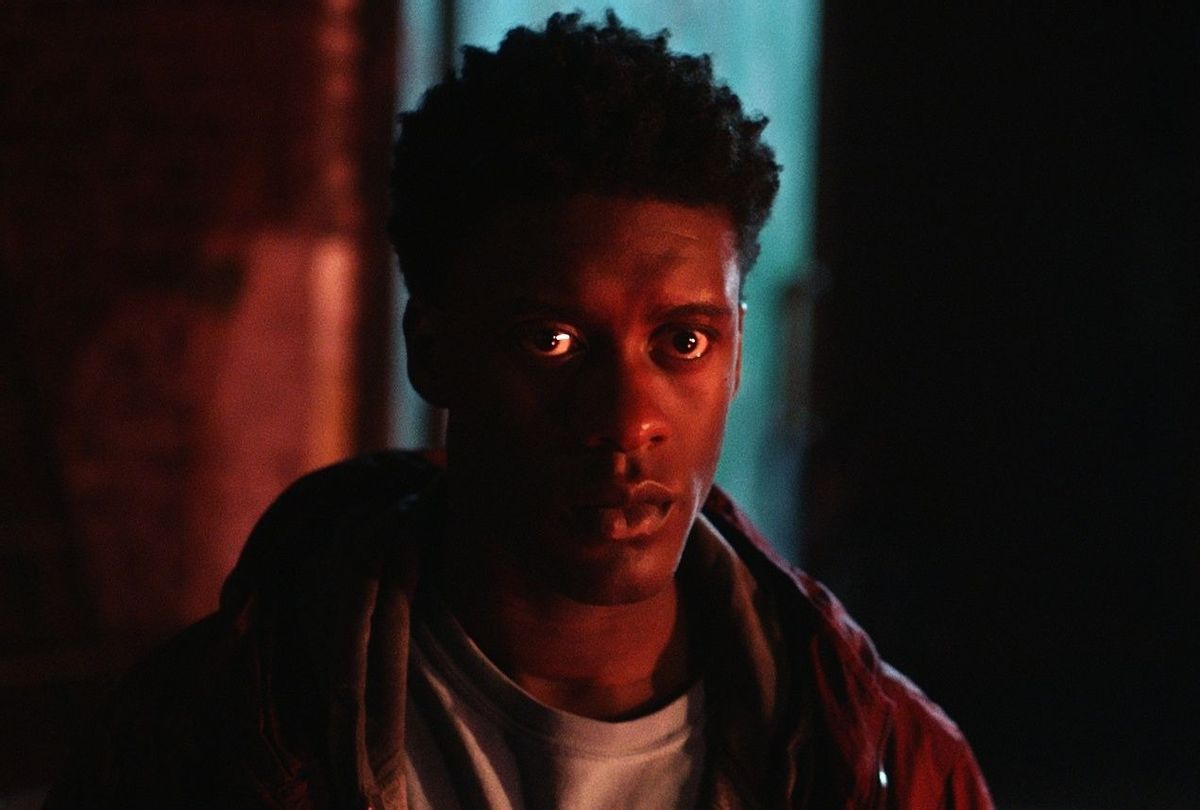 "The Last Tree" is writer/director Shola Amoo's stunning, compassionate, and semi-autobiographical coming-of-age drama which starts streaming June 25 through BAM and other virtual theaters. Femi (Tai Golding) is an 11-year-old boy who grows up in Britain's Lincolnshire countryside with Mary (Denise Black), his foster mother. When his birth mother Yinka (Gbemisola Ikumelo) arrives one day, she takes him back with her to London, where they live in estate housing. Femi is resistant to the change. Moreover, on his first day of school, he gets into a fight. His anger is forming — against his birth mother and against Mary (he feels she broke her promise that he would stay with her) — as well as against his fellow students, teachers, everyone.

When the film later cuts to Femi at 16 (Sam Adewunmi takes over the role), he is still full of inchoate rage. An association with gangster, Mace (Demmy Ladipo) offers Femi one path in life, while a kindly teacher, Mr. Williams (Nicholas Pinnock of "For Life") tries to steer him in a more responsible direction. Femi is also attracted to Tope (Ruthxjiah Bellenea), a classmate with blue braids who, like him, enjoys listening to The Cure.

The film's last act takes place in Lagos, where Femi and his mother travel to meet his father, a fascinating, revelatory sequence.

Amoo's film is stylish and extremely well-acted (Adewunmi's eyes speak volumes). While "The Last Tree" will draw comparisons to "Moonlight" — it is told in three parts and features the same character at different ages — Amoo's drama is not a copycat effort. Although it does not consider issues of sexuality, it deeply contemplates the complexities of masculinity, belonging, respect, and identity.

Amoo chatted via Zoom about "The Last Tree," and issues of masculinity, coming of age, and the culture shock of moving from white to Black spaces.

The film is semi-autobiographical. What did you discover about yourself in telling/recreating a version of your life story?

It's interesting, because I went through a process using the elements I directly experienced — [from] foster care in a monochromatic space to multiculturalism in South London — and I interviewed Nigerians who had also been fostered. So, the film represents the collective experiences of British Nigerians coalesced into one experience. It's personal, but being so specific, it's also universal.

The style of the film is immersive, intimate, and observational. Can you discuss your approach to the drama? Femi is a proxy for the audience as well as your alter ego. Viewers understand his mindset and feel his pain.

Immersion was the name of the game. We were wondering how to take you through these environments with this character to directly respond to him having an experiential not an objective experience and keep you there in this weird, modern odyssey with different sounds and landscapes. The location informs the character, and we had a heavy influence on that. The sound design puts you deeper in his headspace, sonically and visually. We wanted that experiential effect.

Can you talk about why you structured "The Last Tree" in three parts, moving from an idyllic, rural, all-white space to the bustling African capital of Lagos via South London?

Where I went to school it was 90% Black, Asian, and Latinx. I could count the white kids on my hand. That was the environment, and that contrast is more stark, if not as stark as his transition from London to Lagos. Lincolnshire had smaller classes, more space, and this hermetic existence, and complete culture shock impacts Femi. I was interested in how stark each leap was. Each leap represented a leap aesthetically and culturally.

What can you say about creating the key dramatic/decision points in the film?

I think we steered clear of sensationalism. We found what was organic to the moment. The relationship Femi has with his mom — how do you build yourself in a new context that is unfamiliar? That felt organic, the transition from Lincolnshire to South London. As we reach an apex at the end of the first act you are seasoned in this space. Who are you in this environment that you have acclimatized to after a few years, and what struggles do you have at that point? He's found a coalescence, and in a story about cultural identity, you have to understand who you are to move forward, so in the diaspora, you have to understand where you are from, and that provides context for ancestry and a father that he couldn't understand as a child and can now unpack with the tools he has.

I like the idea that Femi Is, as one character describes, "failing himself." But I would say he's "finding himself." He has different interactions with adults and peers. I am curious how you conceived of his influences that range from loving to abusive and various degrees in between. Femi adopts and recalibrates to each person and situation in his effort to acclimatize.

We had this concept of a mask that was erected to his enforced migration trauma. It's hermetically sealed, and in his negotiations, his mask is up. He is being who he needs to be in certain scenarios. He projects the safety he doesn't feel; inside he's fragile. We slowly chip away at his mask with all the characters until his breakdown/breakthrough that enables him to feel himself. He has key moments of agency.

I am particularly interested in discussing the ideas of masculinity in the film. How Femi copes with the lack of a male role model/father figure, and how his behavior stems from ideas about what it means to be a man when Mace and Mr. Williams vie for his soul.

The masculinity thing is related to the mask concept. They both project a sense of strength, ruthlessness, and control — especially for a fragile character with trauma. It's that image that leads him down a path that is a little dubious. Mace's character is interesting and projects a larger than life image. Femi feels like he's meeting the biggest gangster in the world, and that's not the case. We pull back and show Mace's sensitivity and family life. The dismantling of this image was important to show so we don't have a one-dimensional picture of young Black men as thugs. Having Femi see through that mirage allow Femi's mask to unravel.

The film does not quite address the Black Lives Matter movement, but what thoughts do you have about that in this day and age as it pertains to life in the UK where prejudice is rampant?

The film doesn't deal with racism in the most overt way, but I like to think that it's quietly a revolt. A young Black man actualizes and forms an identity under the space of white supremacy and anti-Blackness. It is tough, and a failure on all our parts. What's revolutionary about Femi is having this development and growth and going back to Africa and understanding his heritage. His mom has him fostered initially so she has space to work and afford the child. That is coming from systemic pressures. It's subtle and implied, but showing a young Black male self-actualizing is still revolutionary.

Femi doesn't get much respect. What observations do you have about his anger?

There's a frustration in being misunderstood that is very relatable. Respect — if you start with respecting yourself, and you have the tools to do that, and the ability to apply it to other relationships and contexts. Femi is always just treading water even if he projects more than that. He's fragile and easily broken, and that leads to frustrations and outlets that aren't productive. He has some tools, but he is still getting the tools to emotionally articulate himself and have a real stake in his relationships.

Likewise, his relationship with women, Yinka, Tope and Mary, are often fraught. Can you discuss his interactions with women?

I think he's uncomfortable as a character and doesn't know how to relate to people that he would normally relate to emotionally. Mary made a promise she couldn't keep, and he has trust issues there. What's interesting is that through Tope, he formulates a language, albeit a fraught language, that gradually builds to an understanding and supportive situation. It's reflected in his relationship with his mom — he comes to understand things and gains insights.

The second generation can have trouble understanding immigration stories. If you're in the home, you have that cultural understanding but being raised in a foster home, his understanding culturally is tied to his mother, and he understands his mother when he's in Nigeria, his motherland. Femi's puzzle pieces are scattered and bit by bit he is putting pieces back. That's true of being caught between the UK and other spaces.

Femi's mother says she moved him to give him opportunity, a better life, even though she has nothing. There is a discussion where he is pressured to work for himself and be free vs. work for a white company? What can you say about opportunities for Femi?

The opportunities can often look bleak, and I felt that growing up as a Black male, with comparison to whites, it is hard to see how you can self-actualize to your full potential in this space. We're not taught the history to fill that confidence. I remember two weeks in school on the history of slavery — not on colonialism and understanding "We're here because you were there," and the context and grounding in world history, let alone Black Brits — who you'd think were anonymous from protesting or engaging with the state for rights. It's not taught. I learned that outside school. You need those tools to know how to design a path to fulfill your potential and self-actualize. And now there seems a real desire to revisit the educational system to understand Britain and contextualize its history, warts and all. It's long overdue and it needs to happen.

"The Last Tree" is available beginning June 25 through BAM and virtual cinemas.