In protest of Facebook's failure to moderate hate, Verizon and Unilever stage a boycott 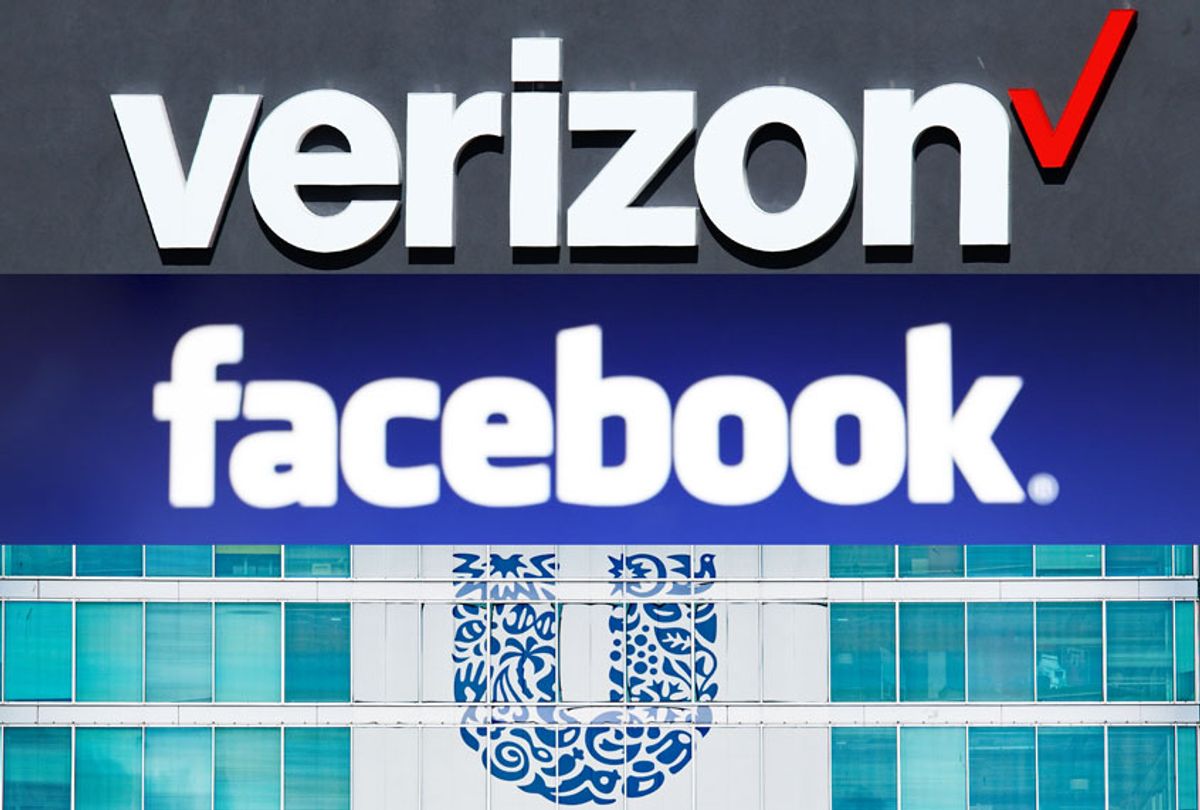 The consumer goods company Unilever and telecommunications corporation Verizon have both announced that they will boycott advertising on Facebook as a way of addressing the social media giant's permissive attitude toward hateful content on its platform.

Unilever, which manufactures everything from soap and laundry detergent to ice cream and mayonnaise, referred Salon to a statement explaining that the company wishes to address social issues in a responsible way and has developed a "Responsibility Framework" to guide its policies. The statement argued that, because of the "divisiveness and hate speech during this polarized election period in the U.S.," the company is taking its social responsibilities very seriously and avoiding advertising on prominent social media platforms.

"Given our Responsibility Framework and the polarized atmosphere in the U.S., we have decided that starting now through at least the end of the year, we will not run brand advertising in social media newsfeed platforms Facebook, Instagram and Twitter in the U.S," Unilever explained in a statement released on Friday. "Continuing to advertise on these platforms at this time would not add value to people and society. We will be monitoring ongoing and will revisit our current position if necessary."

The company added, "We will maintain our total planned media investment in the U.S. by shifting to other media."

Telecom giant Verizon has also taken a stand against Facebook, with the company's chief media officer John Nitti explaining in a Thursday statement that they were "pausing our advertising until Facebook can create an acceptable solution that makes us comfortable and is consistent with what we've done with YouTube and other partners." Verizon did not reply to Salon's request for comment.

Facebook sent Salon a statement defending its practices in curating its platform and weeding out hate speech.

"We invest billions of dollars each year to keep our community safe and continuously work with outside experts to review and update our policies," a Facebook company spokesperson told Salon. "We've opened ourselves up to a civil rights audit, and we have banned 250 white supremacist organizations from Facebook and Instagram. The investments we have made in AI mean that we find nearly 90% of Hate Speech we action before users report it to us, while a recent EU report found Facebook assessed more hate speech reports in 24 hours than Twitter and YouTube."

The company added, "We know we have more work to do, and we'll continue to work with civil rights groups, GARM, and other experts to develop even more tools, technology and policies to continue this fight."

Facebook's allegedly lax policy toward hate speech has aroused internal controversy as well as external opposition. Earlier this month dozens of telecommuting Facebook employees staged a virtual walkout to oppose CEO Mark Zuckerberg's refusal to take a strong stance against the racist, violent and sophistic content posted by President Donald Trump. Zuckerberg told Fox News last month that his platform wishes to remain neutral when it comes to content posted by the president.

"We've been pretty clear on our policy that we think that it wouldn't be right for us to do fact checks for politicians," Zuckerberg told Fox News. "I think in general, private companies probably shouldn't be — or especially these platform companies — shouldn't be in the position of doing that."

Some speculation has emerged over a low-key meeting held at the White House in October between Trump, Zuckerberg and a Facebook board member who is notoriously sympathetic to Trump, Peter Thiel. While many details surrounding the meeting remain obscure, it has been reported that Trump did most of the talking and (according to The New York Times) the spirit of the meeting was "convivial." Roger McNamee, an early Facebook investor who is now a strident critic of the company, told the Times that "I believe they have a deal" and that it was "probably implied rather than explicit." He also speculated that "Mark's deal with Trump is highly utilitarian. It's basically about getting free rein and protection from regulation. Trump needs Facebook's thumb on the scale to win this election."

While there is no evidence that any deal was struck between Trump and Zuckerberg, and the Times added that "officials at Facebook and in the administration scoff at the notion that there is some kind of secret pact," Trump seems to have been softer toward Facebook than other social media platforms. Last month he retaliated against Twitter after the social media giant appended a fact-check to one of his tweets, signing an executive order instructing the Federal Communications Commission to craft a new regulation potentially exempt social media platforms from previous legal protections. The order specifically targets Section 230 of the 1996 Communications Decency Act, which protects online platforms from being liable for the content posted by their users.

Even before he retaliated against Twitter, Trump began threatening the platform. Salon spoke with Harvard Law professor Laurence Tribe by email about whether his rhetoric violated Twitter's First Amendment rights.

"The threat by Donald Trump to shut down social media platforms that he finds objectionable is a dangerous overreaction by a thin-skinned president. Any such move would be blatantly unconstitutional under the First Amendment," Tribe explained. "That doesn't make the threat harmless, however, because the president has many ways in which he can hurt individual companies, and his threat to do so as a way of silencing dissent is likely to chill freedom of expression and will undermine constitutional democracy in the long run."

Rick Hasen, a law professor at the University of California–Irvine, echoed Tribe's view.

"Donald Trump cannot close down Twitter," Hasen explained in writing to Salon. "Twitter is a private company and it is entitled to include or exclude people as it sees fit. And if Trump tries to bring DOJ forces against social media companies (perhaps raising antitrust concerns) but does so for partisan reasons, then Trump would be violating the First Amendment."