What's in a name? Shedding racist images and branding is just the start of breaking the Jemima Code 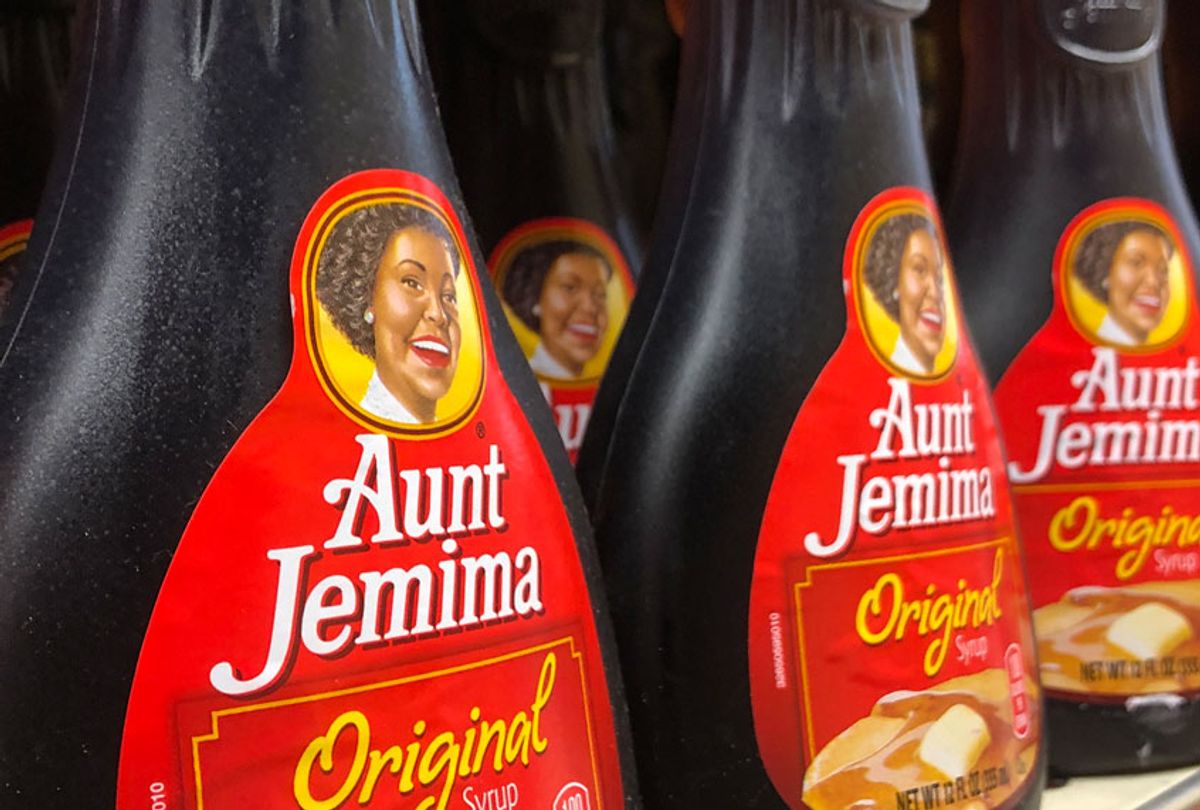 After Quaker Oats announced in June that the company would be removing the image of Aunt Jemima from its packaging and changing the name of the brand, Toni Tipton-Martin, the James Beard Award-winning food writer and author of the book "The Jemima Code: Two Centuries of African American Cookbooks" tweeted that the decision "acknowledges that our ancestors' names, proficiencies, and values have been weaponized and monetized, not equalized."

Salon reached out to Tipton-Martin, who expanded upon that point.

While some may have looked at the contemporary packaging and not seen an issue, Tipton-Martin says that the Aunt Jemima character is rooted in racism.

"Today, it's an innocuous figure, which is why I think we're seeing the blowback and the questioning of her removal, because people see faces on packages all the time," she said. "If you are talking about the origin story, then there was a significant message being telegraphed to the buyer — and M.M. Manring talks about this in the book 'Slave in [a] Box.' There's this concept of assuring the home cooks who no longer had Black women in their kitchens through emancipation, they could still maintain the high quality cooking with the purchase of this product."

But, Tipton-Martin said, the product's imaging signaled different messages to different consumers, even after the 131-year-old company updated its logo in 1989 to remove the "mammy" headscarf from the depiction.

"It would serve to remind African Americans that your options are limited," she said. "You will always be the 'slave in the box,' hence the title of that excellent book. And those two concepts fused over the years so that only African Americans feel that identity, pain and loss of agency associated with characterizing African American female cooks as those who do the hard labor in the kitchen."

It's this type of deeply embedded signalling, she said, that leads to trite phrases like "slaving in the kitchen."

Our world is filled with codes — arrangements of words and symbols that mean different things to different people. The Jemima Code, referred to in Tipton-Martin's book, focuses on the descriptions of and codes surrounding Black women who lived and worked in the plantation South, especially the caricature of Aunt Jemima.

Removing that image and name from the syrup bottle is a start towards breaking the Jemima Code.

"We recognize Aunt Jemima's origins are based on a racial stereotype," Kristin Kroepfl, vice president and chief marketing officer of Quaker Foods North America, said in a statement on June 17, just two days before Juneteenth. "As we work to make progress toward racial equality through several initiatives, we also must take a hard look at our portfolio of brands and ensure they reflect our values and meet our consumers' expectations."

But Quaker Oats isn't the only company to shed racist or insensitive imagery and brand names from their products.

B&G Foods announced a day later that it would conduct a review of Cream of Wheat's packaging, which depicts a Black chef who was originally based on Rastus, a racist caricature portrayed in minstrel shows (the company changed the mascot in the 1920s to portray Barbados-born chef Frank L. White, but some say the connotation still remains). ConAgra Brands released a statement June 17 saying it had "begun a complete packaging review" of the Mrs. Butterworth syrup brand, as the bottle was reminiscent of Mammy caricatures.

The same day, Mars Incorporated announced that it would be evolving the Uncle Ben's products' "visual brand identity," which currently depicts an elderly Black man and also originated in racist stereotypes and imagery.

As the list of companies continues to grow, it offers an opportunity to interrogate how the romanticization of a pre-Civil War America — specifically the Antebellum South — was capitalized upon, dealing in revisionist history and racist stereotypes as a way to build brands that have held space on grocery store shelves for decades. These brands became so enmeshed with the American commercial fabric, that it became easy enough to drop them in your grocery basket without a second thought.

As culinary historian and writer Michael Twitty put it in a recent essay for NBC News about Uncle Ben, Aunt Jemima and Rastus, "these images on consumer products in the 21st century served as texts of marginalization and otherness for countless white homes where only these three 'Blacks' would ever be allowed at the table."

In many ways, it reminds me of the recent swell of Confederate monument removals. For many people, they were simply statues of these old men on horses; I heard that a lot in reference to the John Breckinridge Castleman statue that finally was taken down in Louisville, Ky., after three years of protest and public arts committees. Over those three years, some citizens wanted to debate just how racist Castleman was (he served as a Confederate officer and, while he was pardoned, requested that his casket be draped with both the American and Confederate flags).

But I remember when Chris Reitz, a University of Louisville professor, curator and public monuments committee member, raised the astute question, "Would we erect a monument to this person today?"

Similarly, companies are having to grapple with whether they would name or decorate their brands in a way that is identical to their current form if they were starting from scratch today. The process highlights a series of staggering blind spots — which were fully encapsulated in a statement by the country group Lady Antebellum when they announced their name change in early June.

"When we set out together almost 14 years ago, we named our band after the southern 'antebellum' style home where we took our first photos. As musicians, it reminded us of all the music born in the south that influenced us . . . southern rock, blues, R&B, gospel and of course country," the band said. "But we are regretful and embarrassed to say that we did not take into account the associations that weigh down this word referring to the period of history before the Civil War, which includes slavery."

The group announced they would be changing their name to "Lady A," but, as Rolling Stone reported later that week, they did this without consulting Anita White, a 61-year-old Black Blues singer who has used the stage name Lady A for over 20 years, over multiple recordings.

"This is my life. Lady A is my brand, I've used it for over 20 years, and I'm proud of what I've done," White told Rolling Stone.  "This is too much right now."

She continued: "They're using the name because of a Black Lives Matter incident that, for them, is just a moment in time. If it mattered, it would have mattered to them before. It shouldn't have taken George Floyd to die for them to realize that their name had a slave reference to it."

And in this statement, White highlights some of the sentiment surrounding recent name changes. For some brands, shedding their racist names seems well-intentioned (in a follow-up interview with USA Today, White said Lady Antebellum members had reached out to her and apologized and that they were "turning hurt to hope"). For others, it counts as too little, too late; it's simply a PR move intended to appease the current moment without actually understanding what personal or systemic biases led them to choose that name in the first place, or keep it for a number of years.

This is especially true in the case of brands that were repeatedly told — long before the police killings of George Floyd and Breonna Taylor — that their names were problematic. For example, Thug Kitchen.

The plant-based website, which launched in 2012, became known for its profanity-laced voice and inventive vegan recipes ("eat like you give a f**k," was the tagline of its 2014 cookbook).

But since its launch, some criticized the brand's use of the term "thug," especially once it was revealed that the site's once-anonymous creators, Michelle Davis and Matt Holloway, were, as VICE put it, "two WASPy white people from California."

"It goes without saying that 'thug' is a loaded word, which in our politically correct, post-racial society, has become the polite way to say" the n-word, wrote Maya Francis for The Root.

Additionally,  Bryant Terry, a Black cookbook author and activist, wrote about the tone assumed in the cookbook in 2014.

"Certainly, swearing isn't exclusive to African-Americans," Terry wrote. "But many of the site's captions, usually dreamed up by Davis to accompany Holloway's striking visuals, rely heavily on phrases from Black rap lyrics, stand-up routines, and films, which eventually went mainstream."

Some critics want to debate just how racist the term "thug" is, but two points are undeniable. First, the term has often been used to dehumanize people — specifically men — of color (remember when The New York Post smeared Corey Pegues as a "thug cop" on their cover?). The second point is that the food writing and cookbook publishing landscape has long been incredibly white, and there was something certainly unsavory about Davis and Holloway's assumption of what writer Jordan Sowunmi classified as "digital blackface," when it's statistically less likely that a Black writer with a similar vision would have been published.

Still, Holloway and David went on to release two more books with no change to tone or name; then on June 13, they released a statement.

"When we first launched Thug Kitchen in 2012, we wanted our name to signal our brand's grit in the otherwise polished and elitist food scene," they wrote on their website, which is now rebranded a Bad Manners.  "We realize, however, that whatever our original intention, our use of it reflected our privilege and ignored the reality that the word is assigned to Black people in an attempt to dehumanize them. That's . . . not at all what we want to stand for. We apologize. We recognize we need to do better."

Similar to Anita White's statement about Lady Antebellum, it shouldn't have taken the deaths of Black Americans for Thug Kitchen to suddenly realize that their name was racist, especially after years of criticism by Black writers, readers, and food industry members.

But after brands shed their racist imagery and names, then what? Perhaps this could serve as an opportunity to shine a spotlight on the Black creators whose histories have long been overshadowed. In her book "The Jemima Code," Toni Tipton-Martin presents over 150 Black cookbooks that range from a rare 1827 house servant's manual, the first book published by an African American in the trade, to modern classics by authors such as Edna Lewis and Vertamae Grosvenor.

"Once I had the cookbooks, they told their own story, they began to reveal truths about African American cooking that had not been portrayed previously throughout history, whether that was in literature or in recipe books of the mainstream," she said. "And when I say that the authors provide liberation, they free us all . . .  from the narrow definition of what African American cooking is supposed to be."