Fifth of July: An Independence Day like no other, and the real struggle lies ahead

On this quiet, strange holiday weekend, we weren't celebrating the birth of democracy. That hasn't happened yet 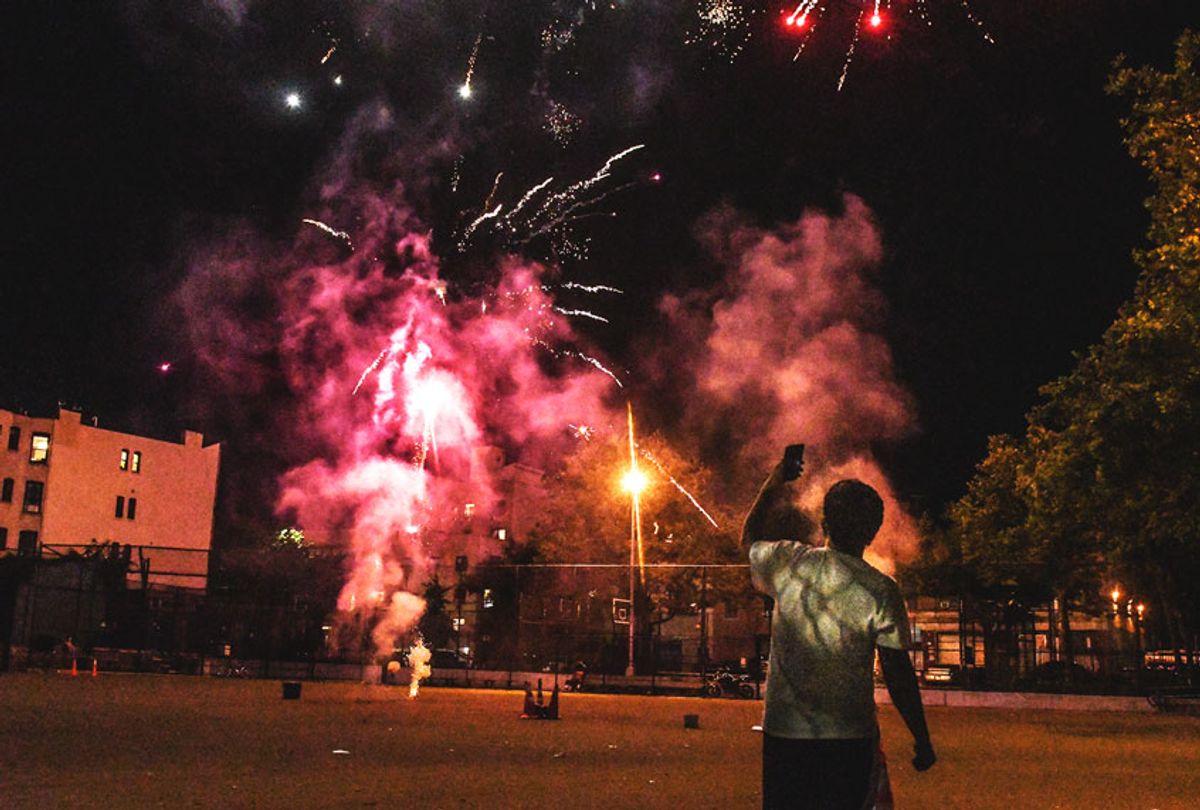 None of the usual patriotic sentiments, no matter how ambivalently expressed, feel remotely adequate this year. What exactly the Fourth of July symbolizes in 21st-century American life is difficult to say: a moment of rest and reflection, a communal celebration momentarily lifted above politics. That was probably always an illusion, but in the summer of 2020 — the pandemic summer, the summer the statues came down, the summer of astonishing, escalating ugliness from the president of the United States — that illusion is no longer sustainable.

Last year my teenage kids and I joined with many thousands of other people of all possible races, backgrounds and nationalities on the FDR Drive in lower Manhattan to watch the enormous Macy's fireworks show, staged from a series of barges in the East River and from the Brooklyn Bridge. Did it feel, even at the time, like too much of a muchness, like an attempt to prove that the nation's largest city, at its worst moments so infamously impersonal, had a spirit that rose above the Trumpian implosion of America? Well, it's easy to say that now, but that's certainly what I feel looking at the photos I shot that night.

I don't need to explain why we didn't attend anything like that this year, and why you didn't either. The Macy's show was downgraded to a series of pop-up fireworks displays in various New York neighborhoods, at locations not announced in advance. We were in a tiny upstate village about 160 miles away, setting off a few discount-store fireworks in our backyard. We could hear a handful of our neighbors doing the same thing, for an hour or so after nightfall, but it all wrapped up pretty quickly.

If the skies were largely silent over America over the holiday weekend — excepting Donald Trump's aggressively showy celebrations, first at Mount Rushmore and then in Washington — there have been fireworks at ground level for weeks, both literally and figuratively. Indeed, we appear to have moved into a realm where metaphor has become reality, or perhaps the other way around. To borrow the language of critical theory, the signifier and the signified, whose meanings are always intertwined, have become the same thing.

"I can't breathe" turns out to have been the well-attested final words (or nearly final) of numerous Black people killed by police officers. It is also a rallying cry and a metaphorical statement of protest against claustrophobic oppression that transcends skin color or geography. "Black lives matter" is both a simple declarative statement and a metaphorical construction that requires context and history to unpack.

Statues of Robert E. Lee and Stonewall Jackson — or, for that matter, of George Washington, Thomas Jefferson, Teddy Roosevelt and so on — are both mute physical objects, shrouded for decades in vague veneration, and statements about American history, with authors and intended audiences. They are words and deeds, made manifest in physical space in a coded form meant to stand for all eternity. Of course, they never do.

To quote Trump's deeply strange and deeply absurd executive order calling for a new monument called the "National Garden of American Heroes," announced during his Friday night address at Mount Rushmore, statues of historical figures are "silent teachers in solid form of stone and metal." That's true, though almost certainly not in the sense the president intended. As Karen Cox, a historian at the University of North Carolina at Charlotte, told the Washington Post, historical monuments are always "a reflection of those who put them up. They aren't so much about the past as they are a reflection of our values and ideals in the present."

But even that more nuanced understanding is not enough to capture the energy of this moment. What's being contested now is not what those "silent teachers" meant to those who erected them — and in the case of Confederate monuments dating to the early 20th century, that's not mysterious — but what they say about us, right now, and about the fact that most Americans of all colors agreed to pretend to forget what they stood for and why they were there.

I hesitate to attribute too much agency, and too much importance, to Donald Trump, who strikes me mostly as a channel or vector for the tar-pit ooze below American society and culture — a human chemical reaction, inevitably produced by the collision of certain unsavory elements. But as I brushed past above, it's astonishing to have a president at this obvious turning point in our national history who makes absolutely no effort to unite the public or even pretend to, and who remains tirelessly devoted to inflaming the most paranoid racist impulses among his supporters — even as that looks increasingly like the pathway to electoral Armageddon.

One of the most important pieces of America-decoding I read over the holiday weekend was Paul Rosenberg's Salon interview with Jennifer Mercieca, a historian of political rhetoric at Texas A&M and author of the new book "Demagogue for President: The Rhetorical Genius of Donald Trump."

Mercieca argues that Trump knows exactly what he's doing, either consciously or instinctively, with his ingenious and manipulative use of several distinct rhetorical strategies. It's a fascinating argument and worth taking seriously, especially if we acknowledge that it's foolish to depict Trump's 2016 election victory as purely an accident or fluke (or an "aberrant moment," in Joe Biden's phrase). But here's the passage in Paul's interview with Mercieca that really stopped me short:

I've been troubled by two phrases over the past five years: "the age of catastrophe" and "it's later than you think." The first is historian Eric Hobsbawm's description of the era between the Great War and World War II, a period of massive social, political and technological transformation and the collapse of elite leadership. The second is from journalist Max Lerner, who wrote about how to reform American democracy during the first age of catastrophe.

I think that we're in a similar time and that it might be later than we think too. Lerner teaches us that demagogues like Trump are enabled by inequality and societal dysfunction. If we want to stop unaccountable leaders like Trump, then we have to remake society according to what Lerner calls the "majority principle." In 2016 we were distrustful, polarized and frustrated with our government. Trump didn't cause those conditions, but he did weaponize rhetoric to make them worse. ...

The bigger picture is we need to remake our political and economic culture to prevent demagogues like Trump from ever gaining power in the first place. ... We need an economic and political system that works for the people and not for the elite. The political project of our time is to defend democracy.

That's an acute prescription, but one that likely doesn't go far enough. Whether you think Black Lives Matter or the statue protests are righteous causes or self-righteous revolutionary terror (or somewhere in between) isn't the real question. And while I understand the obsessive fascination with voting Trump out of office — and share it, at least on occasion — that's also less important than it seems. Perhaps the real issue isn't to "defend democracy" but to figure out whether we still have one, or ever did, and whether we can build, or rebuild, a democracy that actually functions like one.

In another urgently necessary article of the moment, historian Rebecca L. Spang argues in the Atlantic that the "unexpected and growing coalition" calling for action against racism, stretching from the first wave of George Floyd protests in Minneapolis to a range of establishment politicians, suggests we may actually be in a revolutionary moment — but also that we can't possibly know that for sure. What we see around us, Spang writes, "are pro-democracy protests made difficult to recognize as such because they're happening in a country that has widely been considered a leading site of liberal democracy." My review of that: Yahtzee!

To build anew rather than simply destroy, Spang suggests, we cannot look behind us to "vanished certainties," whether that means a Great Man cast in bronze astride a horse or revolutionary iconography drawn from the Jacobins or Bolsheviks or Black Panthers. We can only look forward to "uncertain possibilities," a phrase that certainly captures the mood of this strange and subdued Independence Day, as we struggle to declare our independence from the past.