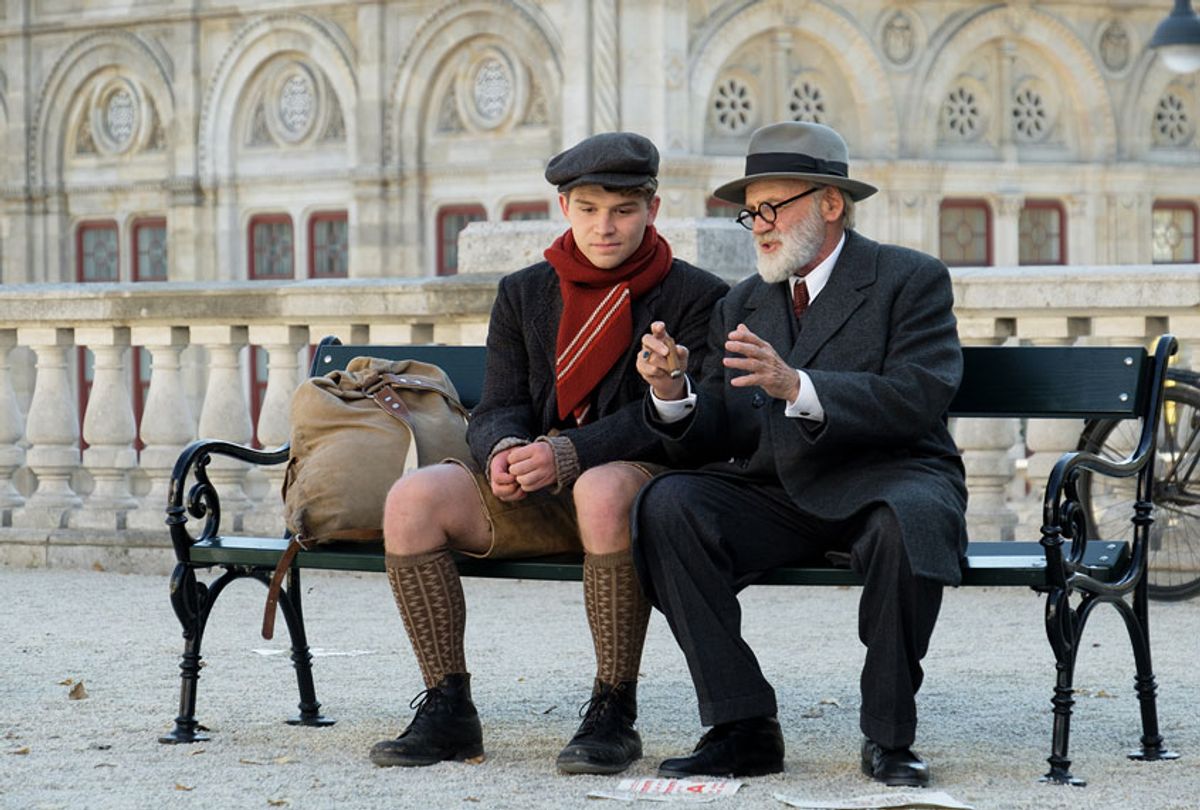 Simon Morzé and Bruno Ganz in "The Tobacconist" (Vertical Entertainment)
--

In "The Tobacconist," set in 1937 Vienna, Sigmund Freud (Bruno Ganz, in one of his last screen roles) never says, "Sometimes, a cigar is just a cigar." This is to the film's credit; much of director and co-writer Nikolaus Leytner's drama, which alternates between starchy and hyperventilating, generates eye rolls. Based on Robert Seethaler's international bestseller, this 2018 film, now getting a virtual theatrical release in America, is what Otto Trsnjek (Johannes Krisch), the tobacco shop owner says a very bad cigar tastes like: horse s**t.

The film opens in the Austrian countryside where 17-year-old Franz (Simon Morzé) lives with his mother Margarete (Regina Fritsch) in Attersee. When Margarete's lover, Preininger Lois (Fritz Egger) dies, Margarete ships her son off to Vienna to apprentice with Otto, a man she knows, in his tobacco shop. The teen is greeted on the railway station platform by a stench that signals the rotten times, and the odor permeates this handsomely mounted period film, which smells less like the aroma of fine tobacco, and more like a cheap cigar.

Franz is an innocent, thrown in the heady urban word, rich with sex — he has instant fantasies about a female customer — and politics. When a man wants to purchase the "Nationalzeitung," the Nationalist Socialist newspaper, Otto says they do not sell that publication. Otto does sell to Jews, however, most notably Dr. Sigmund Freud, much to the dismay of Rosshuber (Rainer Wöss), the butcher next door, among other Nazi sympathizers.

When Freud forgets two boxes of cigars one afternoon, Franz chases after him, and befriends the famed psychoanalyst. Of course, Franz has an agenda. He is besotted by Anezka (Emma Drogunova), a gap-toothed, Bohemian beauty who danced with him at a fair and then disappeared. In the same way "I.Q." had Einstein advising a mechanic on romantic affairs, Franz seeks guidance about the fairer sex from Freud. The Professor tells the teen, "Get the girl back or forget her." Franz can't seem to do either.

Oddly, the one notable quality of Leytner's film are the moody, imaginative dream sequences. Franz has a series of dreams — Freud tells him to write them down — that are strikingly rendered. They show how good this film could have been. Many of these dreams are set on the lake by his home, and feature images such as Anezka gurgling up roses from underwater, or Franz bailing water from a canoe where a naked Freud lies, almost drowning. As Franz posts his dreams on paper on the tobacco shop's window, they confound anyone who reads them.

"The Tobacconist" improves slightly when it focuses on the rise of the Nazis, with individual moments — a satiric cabaret act that pokes fun at Hitler, or a tobacco shop customer, Red Egon (Michael Fitz) hanging a banner about freedom on the side of a building — having an impact. When the Gestapo arrests Otto, Franz's political awakening kicks into high gear. He talks with Freud less about Anezka, and more about the Jewish doctor fleeing to London, where he and his family can be safe. Alas, a big dramatic moment when Franz defies the Gestapo, feels toothless, not powerful.

Most of Leytner's film is impotent. The filmmaker never seems to have much passion for the grand themes. Even when Franz fantasizes about punishing Rosshuber, and putting the butcher's hand in his meat grinder, "The Tobacconist" feels listless. There is no energy in the action, and Morzé's performance is too passive and apathetic. The actor never makes Franz's coming of age or getting of wisdom particularly involving. It is difficult to care about him getting the girl or besting the Nazis. Franz does write letters to his mother, and these scenes are actually quite telling, showing how they express themselves in ways that define their characters. Leytner includes scenes of Margarete repeatedly rejecting the romantic attentions of her employer that make her likeable and show her to be nobody's fool.

In support, Bruno Ganz is engaging as Freud, especially when he talks about "courage, persistence, and stupidity," or pleasure and shame. The role, sadly, doesn't require much of the late, great Swiss actor, but it is fun to think Ganz also played Hitler in "Downfall."

Both Johannes Krisch and Emma Drogunova manage to inject some life into the film whenever they are on screen, in part because their characters have some conflict and complexity.

"The Tobacconist" should have been richer and provided something for viewers to think about and chew on. It is like Ganz's Freud says in the film, "Women are like cigars. If you pull at them too hard, they won't give you any pleasure."