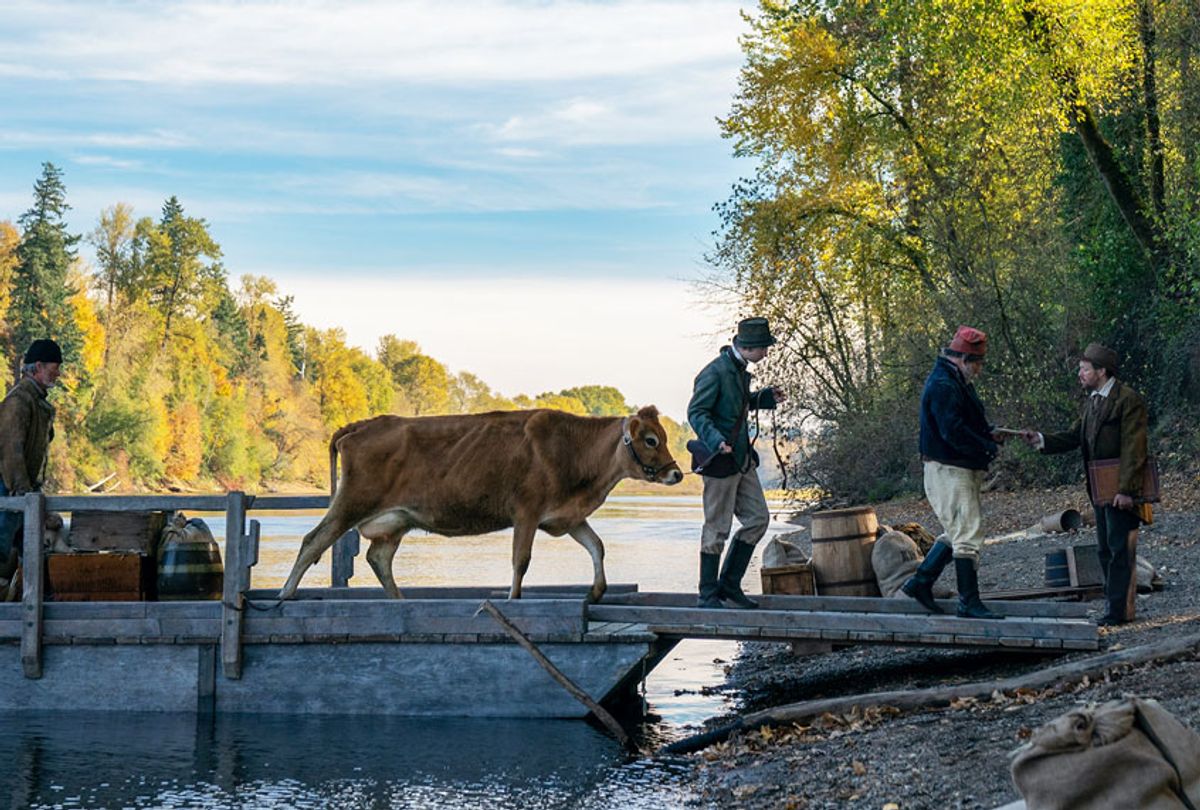 Kelly Reichardt ("Wendy and Lucy") makes quiet — and quietly powerful — films. Her latest feature, "First Cow," available July 10 on demand, is another gem. This deceptively simple story of male friendship set in Oregon in the 1800s, addresses larger issues of race and class.

The film opens in present day as a young woman (Alia Shawkat) is out in the woods with her dog when she uncovers two skeletons. The story then flashes back to 19th-century Oregon, and Otis "Cookie" Figowitz (John Magaro), who is picking mushrooms and trying to appease a group of angry, hungry trappers. Cookie has respect for nature — when he finds a salamander on its back, he turns the animal over. What he does not have is the men's respect. One trapper threatens him with a beating once the men arrive at their destination.

However, Cookie's fortune changes when he unexpectedly meets King Lu (Orion Lee), hiding in the woods. Naked and hungry, King Lu explains that he is Chinese, and that he was being chased by Russians after he killed a man. Cookie hides King Lu, who escapes shortly thereafter. The two men reunite in a town where Chief Factor (Toby Jones) is a wealthy landowner and has just brought in the first cow in the territory.

When King Lu invites Cookie to his humble abode, he tells the friend who saved his life, "Make yourself easy," and sets off to chop wood for a fire. Cookie, who cannot sit still, starts to sweep up the place. It is a terrific moment that shows how these two men work well together. Their friendship is effortless, which is why it is so engaging. Cookie talks about wanting to open a hotel and bakery, and King Lu gets an idea for them to start a business. Stealing milk at night from Chief Factor's cow — King Lu acts as lookout while Cookie sweet-talks the cow — they create "oily cakes" (imagine something like donut holes) drizzled with honey and sprinkled with cinnamon. "What's in it?" one customer asks. "Ancient Chinese secret," King Lu responds. They sell like, well, hotcakes.

As King Lu and Cookie start earning serious cash, they get caught in a bind. Chief Factor has developed an appreciation for their "baked comestibles" — they taste like London to him — but he is unaware that they are stealing his cow's milk. When Chief Factor asks the men to make a clafoutis — to humiliate a visiting Captain (Scott Shepherd) who thinks the Oregon frontier is uncivilized — King Lu worries that the landowner may figure out their secret.

"First Cow" pivots on the men's theft being discovered, but Reichardt emphasizes mood over plot. (The screenplay is by Reichardt and her frequent collaborator Jonathan Raymond, whose novel they adapted). The film immerses viewers in this world, establishing the deliberate pace of the frontier life and featuring many scenes set in the lush, verdant woods. One terrific, lengthy sequence has Cookie arriving in town; it unfolds almost without dialogue, there are only some snippets of background conversation and ambient sounds. Likewise, the scenes set in the woods, are either peaceful moments, or freighted with tension as men try to hide from being detected. Reichardt, who shoots the film in a square format, captures these quiet moments with an unerring eye for detail. (The milk-stealing is all shot at night in a dusky light that is also highly atmospheric).

The few scenes in Chief Factor's house are also compelling. One in particular, has the landowner asleep while his servant (Mitchell Saddleback) snuffs out candles and closes up the house. There is considerable suspense as Cookie and King Lu are outside, gathering the next day's milk.

"First Cow," however, really concerns how King Lu and Cookie can make (and keep) money they earned by stealing from the rich. Their capitalism is not just about making their own way in a frontier land, but "taking what they can while the taking is good." King Lu is always thinking about the hotel in San Francisco — they competition they will face, the capital they will need to make a go of it, and other factors in their business venture. He acknowledges that they are playing a dangerous game. Cookie just wants to be able to keep baking but worries that they are pushing their luck. And this is why viewers root for these men; they are "others" in a region ruled by a wealthy British landowner (i.e., a colonist) who have to find a way to thrive in a world that is stacked against them. When the men are separated by circumstance, the film slowly ratchets up its tension.

The performances by John Magaro and Orion Lee are beautifully modulated and nuanced. Each actor's expressions and reactions reveal their emotions. They have a sly way of looking at one another to communicate what does not need to be said. This makes the friendship between Cookie and King Lu feel real. Their easygoing nature is refreshing especially because these men never fight over money (or a woman).

In support, Toby Jones is appropriately haughty as Chief Factor, and the great Gary Farmer makes a strong impression in his brief scene as Totillicum, a Native American who visits Chief Factor when the Captain is in town.

"First Cow" is a wonderfully unhurried film, which may be why it is so captivating. It allows viewers to sink in and absorb the story and its setting. "You can't just grow a tree. It takes time," King Lu says at one point. Kelly Reichardt's film take its time too. But this may be the secret ingredient and why it is so worthwhile.

"First Cow" is currently available on VOD, and will be available for rental on July 21.