Researchers and professors comment on the origin of pandemic misinformation, and how to debunk such claims 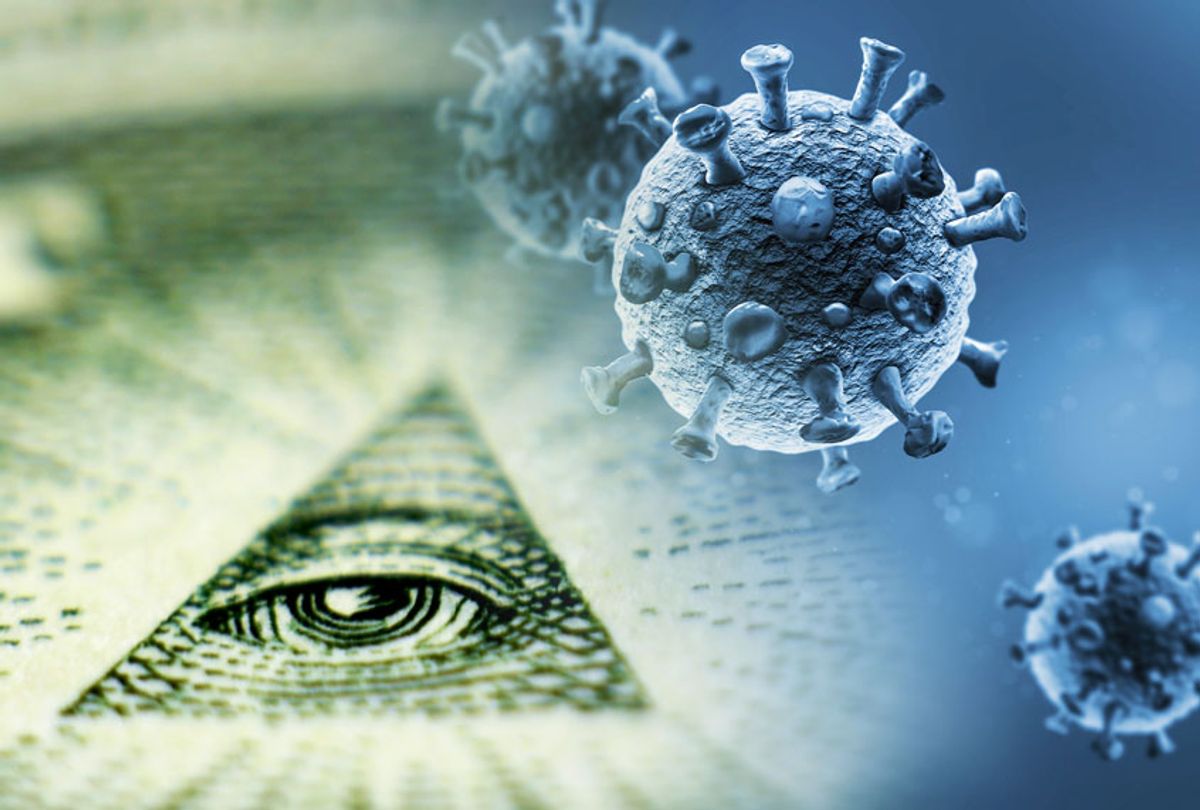 Well before the coronavirus pandemic the United States suffered from a misinformation pandemic, thanks to a toxic stew of social media, intelligence agencies, and a "post-truth" presidential administration. It now appears that the coronavirus — and the concomitant social and public health measures required to stem its spread — served as the perfect agar plate to culture a new round of pandemic-related misinformation.

One recent poll found that millions of Americans would not get a coronavirus vaccine if it became available, threatening our ability to develop herd immunity. President Donald Trump infamously told his supporters that this pandemic exists merely to make him lose to former Vice President Joe Biden in the upcoming election. Many Americans are refusing to wear masks in public — egged on Trump himself — even though doing so unequivocally saves lives.

Salon reached out to experts, scientific and political, to debunk the most widespread conspiracy theories and misinformation about the pandemic.

"It is an abnormal process that stems from the psychopathology of the president, whereby his way of dealing with encroaching reality is to double down on his fantastical thinking and wishful version of reality, as well as to pressure others to hold his beliefs," Dr. Bandy X. Lee, an American psychiatrist with Yale University, told Salon. "Many of his followers and even his non-followers have been conditioned to either listen only to him or to yield to his beliefs because of of the president's sheer emotional drive for his fantasies to be the truth."

Dr. John Gartner — a psychologist, psychoanalyst and former professor at the Johns Hopkins University Medical School — had a similar observation. Gartner explained that historian Richard Hofstadter deconstructed the American tendency to believe in conspiracy theories in his classic 1964 essay "The Paranoid Style in American Politics." "There has always been a strain of that," Gartner observed, "but we've never had it in a president. . . . And this president has a very powerful model this to propagate it and push it through social media thousand times a day, until finally it's become more of a mainstream view for half the country."

"It is very frightening. It's a real regression," he continued. "We've gone from being a more information-based society to a more fantasy-based society, from pro-science to anti-science, from reality to fantasy. He's using his bully pulpit to brainwash people."

That lays out the complicated relationship between the presidency and conspiracy theories. Not all misinformation memes emanate from his mouth directly, but Trump's blatant mistrust for institutions certainly has helped make many conspiracies seem more plausible than they might otherwise.

Salon compiled a list of seven prominent conspiracy theories and instances of misinformation that this author encountered frequently, and asked experts to comment on them.

1. The coronavirus targets the sick and elderly while leaving youth mostly alone.

"The coronavirus affects both old and young," Dr. Russell Medford, chairman of the Center for Global Health Innovation and Global Health Crisis Coordination Center, told Salon. "What's clear is, in terms of the impact of the virus on, it causes severe symptoms and death in the young. It's much less severe in the young, but the young are infected significantly and in large numbers. We are seeing our hospital beds and ICU beds being filled up with young patients now in Florida and Texas, that are in the hospital and undergoing intensive treatment because of their infection by coronavirus."

Dr. Georges Benjamin, executive director of the American Public Health Association, was succinct in his dismissal of this notion: "That's a myth. That's definitely a myth."

2. In terms of its public health impact, COVID-19 is no worse than the flu.

"That's not true," Benjamin explained. "The mortality for this disease is almost 10 times that of influenza, depending on where you are. And we don't understand the full denominator, but it's by far worse than influenza."

Medford echoed Benjamin's reaction, right down to the opening sentence: "That's not true. This is much more severe. It affects not only the lungs, but other organ systems. It is putting both the old and young in intensive care and causing severe damage and death and mortality rates that are significantly greater than we see with the flu."

3. People are being counted as COVID-19 deaths even when they die for unrelated reasons.

"Considering the extent across the entire nation and the world of COVID-19, for there to be a deliberate attempt to inflate numbers based on false research, the assignment of COVID-19 inappropriately to deaths, there's simply no evidence of that," Medford told Salon. "I can't even imagine how that would be executed on a worldwide or even U S national basis. By far the data has been consistent. Many different types of data sources and a number of studies that have looked specifically at this have all shown that the reporting out of COVID-10 associated complications in-depth are accurate."

Benjamin elaborated by explaining how the process of accurately classifying deaths is complicated and messy.

"If you die from a severe lung disease or a heart attack with COVID-19 as the precipitating cause, it is still a COVID-19 death," Benjamin said. "We now know that COVID-19 causes a range of clinical conditions, from strokes to blood clots to heart attacks, in addition to severe lung disease. They're all COVID-19 deaths now. Unless you do autopsies on every one of these patients, you won't get 100 percent of the story."

He added, "Sometimes we put the wrong cause of death, don't always get it right. And I would admit that one of the worst things we do in this country is we don't have a very good death reporting system. We have coroners that are just elected officials with no medical background who sign out death certificates, believe it or not."

4. The pandemic is just a conspiracy to defeat Donald Trump and "everyone is lying" about it.

"That one is purely [partisan,]" Dr. Adam Enders, an assistant professor of political science at the University of Louisville, told Salon. "The correlation with self-identification as a Democrat, as a Republican or a conservative is probably very, very high."

Earlier in our conversation, Enders explained that people "want to believe that a problem isn't as big as it actually sounds. And if that's the case, that happens to be good politically, at least potentially, for President Trump." If Republicans can believe that the pandemic "is just something that the Democrats are perpetrating on him, and it's not something we should really worry about or hold him accountable for, psychologically it feels better for lots and lots of people." It has an added benefit in that it "reduces anxiety and uncertainty a little bit because you believe that you're safe. This isn't going to kill you."

Medford was more blunt in his assessment: "A virus has no political affiliation."

5. Wearing masks does not help and may actually make people more sick.

"Masks are clearly protective," Benjamin told Salon. "Numerous studies have shown that they are protective and they don't make you sick."

Medford had the same argument, telling Salon that the notion masks are anything other than helpful is "categorically false on all levels. Masks not only reduce the titre, where the concentration of virus is in the air, but also can confer some degree of protection for the user itself. Masks are — along with hand-washing and social distancing — the most important elements that we can employ as citizens to make an impact on this pandemic."

6. The pandemic is part of a conspiracy to depopulate the planet and make billions off of a vaccine and/or a vaccine will contain a microchip to monitor citizens' activities and this is all being planned by Bill Gates.

"There's no evidence that there is a conspiracy whatsoever," Benjamin explained. "Somebody will make money off of vaccines, that's for sure, but most of the development for vaccines right now is your taxpayer dollars, and there's been some investments from the pharmaceutical companies as well."

"We think about a general worldview that researchers either call conspiracy thinking or conspiracy ideation as just being this predisposition to view major events as products of conspiracies," Enders explained. "And that sort of explains some baseline level of conspiracy beliefs across categories of conspiracy beliefs." The pandemic presents a somewhat different situation in that "it's not mostly political. It can't really be chalked up to misunderstandings about health and it can't also be chalked up to the sort of negative psychological states that the pandemic itself is creating, where we have uncertainty and anxiety and sort of powerlessness. This is something somewhat different, where people are just predisposed to believe that these nefarious entities are out there always doing these kinds of things. And the pandemic is just another notch in their belt."

Regarding the popularity of using Bill Gates as a scapegoat, Enders explained that "[it has] the classical elements of a nefarious group that's involved with trying to control the population. I think Bill Gates is the guy just because he is a billionaire that has his hands in all kinds of different kinds of societal enterprises. When you think of a super rich guy that uses his money for whatever, you think of Bill Gates, right? So that's why it's Bill Gates. I don't think there's anything else special about that.

7. Donald Trump has beautifully managed the pandemic, as he claims

"It's not exactly a conspiracy theory, but it has some of the makings of one, like turning a blind eye to evidence and just untethered motivated reasoning, where we see what we want to see," Enders explained. "And we expose ourselves to the information that we comport with previously held beliefs. So those kinds of ingredients go into a belief in the kind of thing you just said, which very well could spill over into other kinds of political kinds of conspiracy theories."

Notably, in 2018 Trump disbanded the global health national security team, which would have helped Americans prepare for the pandemic; spent more than two months refusing to acknowledge that the crisis was impending; has spread pseudoscience about the pandemic; and has still refused to implement widespread contact tracing, test manufacturing and worker protections, which are the only effective ways of both containing the outbreak and protecting the economy. As a result, America has suffered a higher per capita death rate and a worse economic setback than nations which were adequately prepared in advance and responded to the pandemic in a rational way.

Bandy X. Lee had a related observation. "One of the main concerns that I have had for the public's mental health has been, first of all, the change of conditions that include the rise and socioeconomic inequality, which is a rising problem," she says. "And instead of solving the problem, this country as a whole, either politically or economically, has chosen to mobilize psychological techniques to convince the population to not only accept the worst of these conditions, but also to even self-destructively advocate for them."

She added, "And because of that, when conditions grow even worse, they drew the population to a frankly destructive politician, who would be Donald Trump, and therefore we're in a rapidly declining, worsening spiral."

Even if the pandemic had not happened, the war on facts waged by Trump would have taken a terrible toll on America's collective mental health. As it so happens, the pandemic has merely forced that problem into the realm of our physical health as well.