Sick of working from home? "Corporate" will remind you of how lucky you are to escape your cubicle

Desk jockeys don't watch the show to soothe themselves. They do it to validate the suspicion that they're not crazy 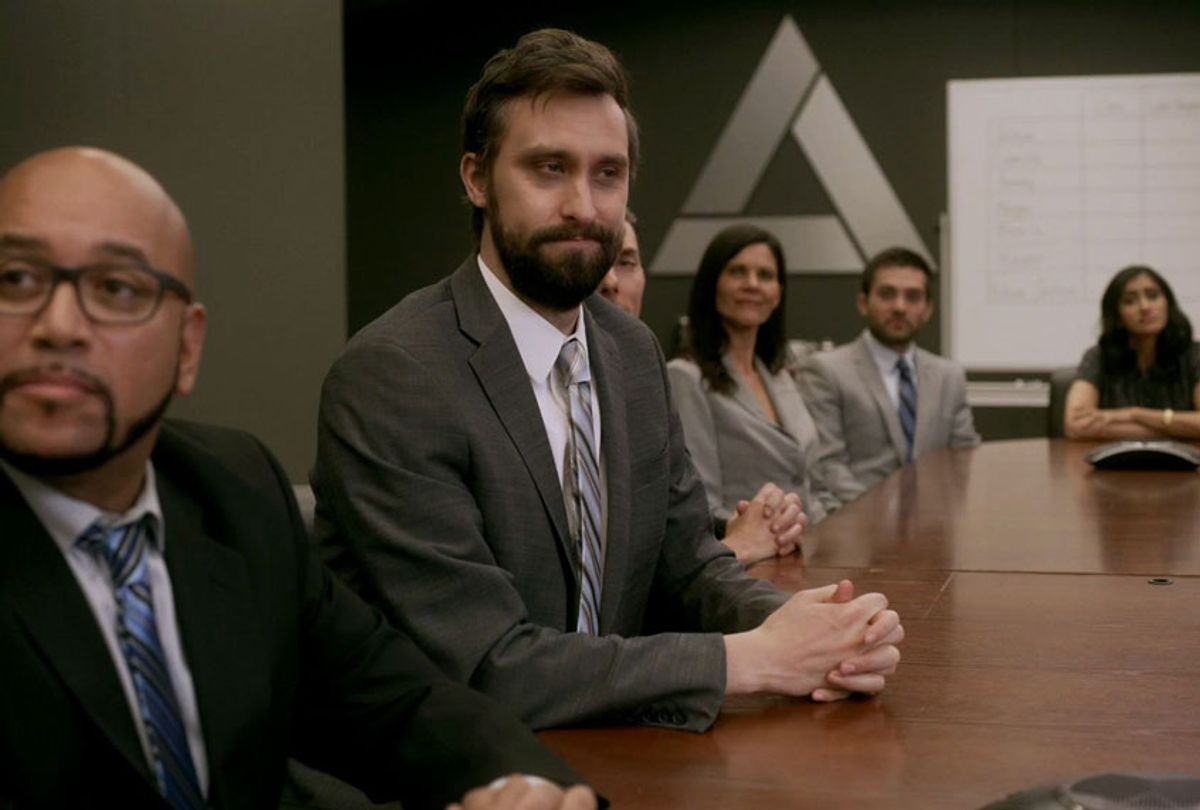 The final episodes of Comedy Central's "Corporate" were filmed before the pandemic shut down the entertainment industry, requiring post-production to be completed by staff members working from home. Whether that's an appropriate ending to a show that reflects the soullessness of American corporate life back on its less-than-enthusiastic participants – i.e. the audience – is debatable.

This detail does lead me to appreciate one benefit to the reality of forced workplace camaraderie at spirit-crushing companies: the semi-regular availability of retirement celebration sheet cakes and the very occasional "Happy Trails" pizza lunches. Be sure to examine those flickering memories closely, though, because they happened less often than you may remember, and the quality of those treats was basic at best.

Office life was perceived to be a necessary evil to maintain team cohesion and worker productivity until an invisible virus forced most of us to work from home . . . while teaching our children, who are at home with us. Suddenly home is where everything happens, and no part of our lives is separate from the others – even worse, we're supposed to stay in our houses and limit in-person socializing.

Our work-from-home lifestyles and the accompanying marathons of Zoom meetings probably make a person wistful for a recently departed past that by nearly all accounts needed to change. Workplaces gave us some place to go, a luxury in these socially distanced times. Large numbers of Americans have returned to some version of it already.

Commutes, irritating and stressful though they are or might have been, also are open windows of time during which we could take in a book or watch a show or even better, do nothing at all.

It's enough to make a white-collar drone miss the relative privacy of that people-fattening pen known as the cubicle, which is where "Corporate" comes in.

As it enters its third and final season, the series shifts further into the surreal.  Work buddies and corporate cogs Matt and Jake (Matt Ingebretson and Jake Weisman, who created the series along with Pat Bishop) and their co-workers at the soul-sucking mega-conglomerate Hampton DeVille have all but succumbed to the apathetic fog that serves as their method of coping with being awake.

Hampton DeVille CEO Christian DeVille (Lance Reddick) and his right hands John and Kate (Adam Lustick and Anne Dudek) fill their hours with profligate spending and assigning pointless tasks to the people who work under them. It almost doesn't matter Aparna Nancherla's Grace is head of human resources given that everyone at the company has tossed their emotional connection to humanity out of the window.

"Corporate" never was the kind of series built for mass appeal despite the accessibility of its humor and the idea that for all their tics and idiosyncrasies, these characters aren't very far removed in behavior from the people we already know.

Grace's inability to care about the people she's supposed to look after isn't all that far off from the real role of a large corporation's human resources office, which is to protect the company as opposed to its workers. John and Kate can't really define what it is that they're in charge of, so they hang on to their power by pointlessly screaming at their underlings.

Kindlier versions of these characters populate feel-good series such as "The Office," "Brooklyn Nine-Nine," "Parks and Recreation" and scores of other comedies that validate the dream that our workplaces are where our other families live – not families of choice but of purpose. Meanwhile in an upcoming episode of "Corporate," worker bees on one of Hampton DeVille's fine companies toast all the personal touchstones they've missed out on for the sake of a very important project for the company, only to have the rug pulled out from under them prior to its launch.

"Corporate" never peddles comfort, drawing instead on a well of nihilism and cynicism. That may be why its audience has always been miniscule compared to other cable comedies. Like "Silicon Valley" does in its best episodes, this is a show that acknowledges the noxious nature of office ecosystems and success ladders, and the pointlessness of working oneself out of actually living. Desk jockeys don't watch "Corporate" to soothe themselves. They do it to validate the suspicion that they're not crazy.

Through storylines about deep depression, the stress-inducing terror of performance reviews, the addictive nature of workplace gossip and the weird limbo of office travel, "Corporate" reminds us that some aspects of industrial communal living simply aren't conducive to psychological health, to say nothing the current threat to our physical selves.

Then again, the constant stream of news reports about unsafe conditions in manufacturing plants and warehouses where workers struggle to fulfill an accelerating stream of products ordered by mail has been doing this all along. This adds a coincidental undercurrent of venom to these episodes along with all the half-hours of "Corporate" that come before this season.

If life at all the companies Hampton DeVille represents seemed cruel and dispiriting before, now its craziness only underscores the banal insanity of operations and the power we assign them. Reddick's Christian DeVille is deliriously intimidating, and like many cosseted multi-billionaires lording over sprawling clusters of companies he's the most insulated from harm, regardless of what happens to the rest of us.

What choice do we have, then, but to savor freedoms we can claim – like, say, laboring all day in pajamas or going on strike from shaving or, say, actually making a "good job" treat for ourselves that tastes good? People who have the good fortune to work from home may appreciate "Corporate" more than they might have in previous years because it reminds us that as stultifying as combining home and work may feel a few months into it, our lives could be worse…and for people who used to live in their offices until recently, it probably has been.

The third and final season of "Corporate" premieres Wednesday, July 22 at 10:30 p.m. on Comedy Central.