And she was: Talking Heads' Chris Frantz on their "Twilight Zone" sound & his romantic rock memoir 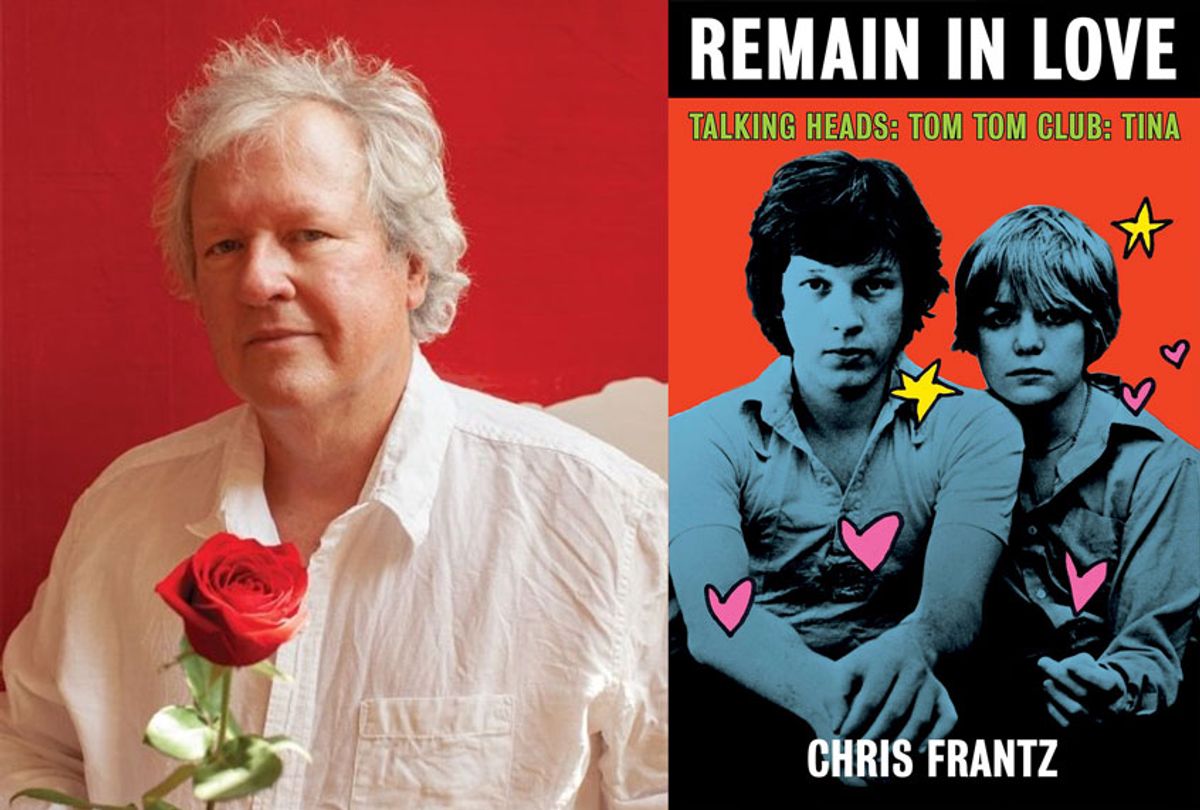 When you read a lot of rock and roll memoirs and watch a lot of music documentaries, you become accustomed to certain recurring motifs. There are fateful meetings with future superstars. There are conflicts within the band and competitions with other artists. There is fame, sex, and excess. What you don't necessarily expect is an entire chapter reminiscing about the author's wedding day. But then again, none of those memoirs were written by the guy married to Tina Weymouth.

As a founding member of two iconic bands — Talking Heads and Tom Tom Club — Chris Frantz helped define the sound of an era and influenced generations of musicians. He's an inductee to the Rock and Roll Hall of Fame, a successful music producer and the cowriter of one of the most sampled songs of all time, "Genius of Love."  Yet  his new book is not the typical braggy litany of accolades and debauchery one might expect from pop royalty. Instead, it's a love story.

For Talking Heads and Tom Tom Club fans, "Remain In Love" offers a fresh perspective on the groundbreaking group, an eyewitness account from the guy on the drums. Frantz delivers anecdotes of encounters with Debbie Harry and The Ramones, the backstories of how hits like "Psycho Killer" were created and yes, insight into the sometimes fraught dynamics of working with David Byrne. But it is at its core a uniquely tender tale of devotion, one that just happens have CBGB's as a prime backdrop. Plenty of memoirs will tell you what it feels like to have a Billboard smash, but you'd be hard pressed to find too many, from any author, that offer an utterly sincere appraisal of spending fifty years head over heels. Salon spoke recently to Frantz via phone about marriage, music and making your wife the hero of your story.

The following conversation has been lightly edited for lengthy and clarity.

Your book is full of supporting players who are so large in so many of our imaginations. And yet, this is entirely a love story. To put a musician's memoir in that context is so unusual. What made you want to write this book right now, and what made you frame it around this relationship?

Two and a half years ago, I got myself an agent and found a publisher. They said to me, "Chris, how long do you think it'll take you to write this book?" I said, "Oh, six months." They've had more experience than I did, so they said, "How about two years?" That worked out fine.

I had been wanting to write it for a long time, because every time I read a music magazine retrospective of Talking Heads — and a few of the books that have been written too — they're just basically regurgitating things that they read in magazine articles, "New Music Express" or Rolling Stone or something. There's nothing new. No new angle, no refreshment. It's always just the same old s**t, regarding Talking Heads, that is.

I thought, I have an opportunity to fill in some of the blanks and add some much needed detail to the Talking Heads story. I've read a lot of rock memoirs — way too many, actually. And I thought, my tone should be positive because I feel positive about the experience I had, despite all the ups and downs and the twists and turns. This was an experience that is unforgettable, and to me, a dream come true.

And then I thought, who's going to be the real hero of this book? It's going to be Tina. She been the love of my life for so many years. We recently celebrated our 43rd anniversary; we've actually been living together for nearly 50 years. I thought, I'm going to make Tina the center of attention. Not only has she been the love of my life and the love remains very strong for me, but also, she was just so great on the bass guitar as a musician and as an artist. And that chemistry, that wonderful chemistry that we had in Talking Heads, she was a very important part of that. I noticed that over the past five years or so, there has been a reexamination of Tina's role in the band by various fans. And most of them agree that she was a very important part.

You do also obviously talk about the band and setting the record straight about what happened in it. What was it about the chemistry, the combination of these personalities that were in some ways so disparate? You have this woman who wasn't even a musician at that point. You have this guy who is very different, very unusual. You bring in someone else a couple of years into the experience. What was it about the alchemy of that?

I felt good about working with David when I played music with him. That was when I realized that he and I had similar interests. We were both interested in going in a direction that was maybe a little bit less predictable than a lot of bands, who went and copied the Stones or copied David Bowie or copied the New York Dolls. That was not our path.

One thing we learned in art school was that it's okay to derive ideas from other artists that have gone before you, but you always have to add something that's unique onto yourself to make it your own. We were very conscious of making Talking Heads music, and the whole demeanor of the band, unique unto itself. We knew that we weren't going to be able to beat The Who or The Rolling Stones or even the New York Dolls at their own game. We were a different breed.

I worked with David from the days at RISD [Rhode Island School of Design], when we started playing together with The Artistics. I felt a very strong musical bond with him. He was coming from a different place, and his unique perspective appealed to me very, very much. Also, he was a damn good rhythm guitar player, really good. And I imagine still is.

You were in the midst of all of these incredibly interesting and singular artists coming up at the same time. Coming out of that period in New York City, it's so distinctive, when you think about Debbie Harry, or Patti Smith, or David Johansen.

The sound feels timeless in a way that very eras in music do. I'm wondering how you were able to be inspired by each other, but also really independent in your sound.

It's just the way it came out. You get up there, you get behind your instrument, you start playing. And sometimes it comes out unique, and sometimes it comes out not so great. Down there at CBGB we were surrounded by everybody. There was a certain degree of competition between the bands, but there was also a great feeling of support and camaraderie between the bands. Well, I wouldn't say I got that from Patti Smith. Let's just say that she had more camaraderie with William Burroughs than she did with Talking Heads.

You talk about this in the book, the way that your look and sound was not that grandiose, rock and roll, glittery thing. It was people who went up on stage and looked kind of normal. That that was very intentional.

It was very intentional. We wanted to look, basically, like everyday people. And we caused a bit of a stir. A lot of people didn't really get it at first. I think they might've thought, "Who are these people? What are they doing up there? And what is the sound that sounds kind of like it's coming from the Twilight Zone?"

One of the things that I appreciated in the book was seeing you as an observer of the sexism in the industry for a female artist. It's a perspective we don't really get to see often.

She understood where David and I were coming from, so we could work together. And it just made complete sense to me.

I'm very fortunate in that respect. I can remember along the way, certain people saying about us, "Oh, they're driving each other crazy. They're going to be divorced soon." Because you know, Tina and I do not agree on every single thing or anything like that. She has very strong opinions about things. With Tina and I, the key is to . . . How shall I say? The key is to remain romantic. Yes, give her flowers. Yes, send her candy. Yes, do the dishes, just little things. And also, the ability to make each other laugh is a very valuable talent.

Now here you both are, as are we all, in this quarantine. This will test the best of relationships. How are you managing it?

We're doing fine here. We also have one of our sons who lives up on the third floor of our house. He's happy to be here as opposed to being in Brooklyn in a tiny apartment. Also my brother is living with us. So we have a pod of four people, two beagles, and one pit bull. We're all getting along fine. Thank goodness.

Who are you listening to these days when you're making dinner or washing those dishes, Chris?

I'm a big fan of reggae music still and calypso music. I'm kind of into the old reggae and the old calypso, although once in a while, one of the new guys sounds cool to me. I'm also thrilled with Bob Dylan's new album, which is I think, a real masterpiece, and probably up there with his very best work. I'm excited by that. I don't actually have the album. I've been listening to it online. I think I'm going to order the CD, so I can play it over my big speakers.