White supremacists "under the guise of Black Lives Matter" also instigated "riots" in Virginia, according to police 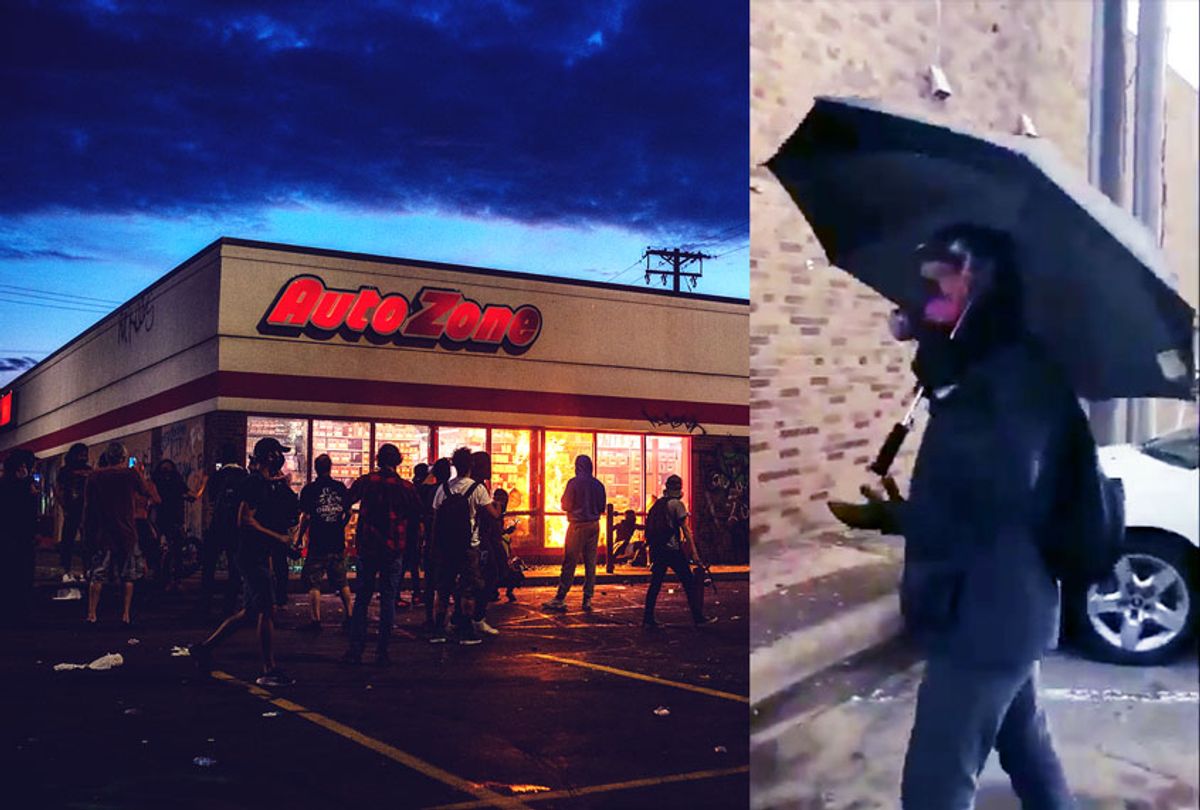 "Umbrella man" sought to invoke violence by smashing windows at an Auto Zone (which was later burnt down) during the George Floyd protests on May 27, 2020 in Minneapolis, Minnesota (Getty Images/Twitter/Salon)
--

A masked man with an umbrella seen smashing windows in Minneapolis amid protests over the killing of George Floyd has been identified as an affiliate of a white supremacist group who sought to "incite violence," police said in a court filing obtained by The Minneapolis Star Tribune.

A video showing a masked white man, who was dubbed the "Umbrella Man" online, smashing the windows of an AutoZone that was later set on fire with a hammer went viral in June and quickly became the subject of speculation.

Some activists alleged that outside "provacateurs" had tried to spark violence at the protests. Police said the man spray-painted the words "free s--- for everyone zone" on the store's windows, according to The Star Tribune. Some people initially falsely identified him as a police officer in nearby St. Paul, though officials quickly refuted those IDs.

A police arson investigator said the vandalism of the AutoZone store helped "spark a chain reaction that led to days of looting and rioting," The Star Tribune reported. The store was one of dozens burned in subsequent days.

"This was the first fire that set off a string of fires and looting throughout the precinct and the rest of the city," Sgt. Erika Christensen wrote in a search warrant affidavit obtained by the outlet. "Until the actions of the person your affiant has been calling 'Umbrella Man,' the protests had been relatively peaceful. The actions of this person created an atmosphere of hostility and tension. Your affiant believes that this individual's sole aim was to incite violence."

Christensen said police identified the man after receiving a tip that he was a member of a Hells Angels biker gang who "wanted to sow discord and racial unrest by breaking out the windows and writing what he did on the double red doors."

The Star Tribune did not identify the 32-year-old suspect, who has not been charged with a crime. The outlet did note that he has a criminal history, which includes convictions for assault and domestic violence.

He was also linked to another incident in Stillwater last month in which men wearing "white supremacist garb" confronted a Muslim woman and her 4-year-old daughter. Police determined that the man is an associate of the Aryan Cowboy Brotherhood, a white supremacist prison gang based mostly in Minnesota and Kentucky, according to The Star Tribune.

Leaked intelligence briefings obtained by the outlet also showed that the president of the Hells Angels called up 75 members of the Aryan Cowboy Brotherhood to defend the club's headquarters in Minneapolis amid the protests in June. Another leaked memo suggested that local biker gangs "associated with white racially motivated violent extremists" discussed trying to incite riots while dressed as members of the anti-fascist movement antifa, though it remains unclear if the discussions were ever followed through.

President Donald Trump and Attorney General William Barr, among dozens of other high-profile Republicans, have tried to blame unrest on antifa despite no evidence linking its supporters to any violence.

The report comes days after police in Virginia said white supremacists "under the guise of Black Lives Matter" had instigated "riots" in Richmond over the weekend, local news outlet WSLS reported.

"There were white supremacists marching under the banner of Black Lives Matter attempting to undermine an otherwise overwhelmingly peaceful movement towards social justice," Stoney said Sunday, though he did not provide evidence. "Their mission is simple: to undermine the month of peace, community-driven protest that this city has seen. It's not the Richmond we know."

More than 20 people were arrested after the unrest caused about $100,000 in damage to Virginia Commonwealth University, a city dump truck and other buildings," according to The Washington Post.

The FBI arrested three men in June with ties to the far-right "boogaloo" movement after they allegedly planned to use protests in Las Vegas to "hijack the protests into violence" by planning terrorist attacks against government officials and property.

The Department of Justice later charged a California man linked to the "boogaloo" movement after he allegedly killed a federal officer while using protests in Oakland as cover in hopes of sparking mass violence.

A leaked FBI memo last month also said white supremacists using online social networks "incited followers to engage in violence and start the 'boogaloo' — a term used by some violent extremists to refer to the start of a second Civil War — by shooting in a crowd."

"The truth behind this fearmongering and dangerous rhetoric," MSNBC host Chris Hayes said, "remains that the worst actual documented instances of violence over the last two months were perpetrated by right-wing white nationalists."