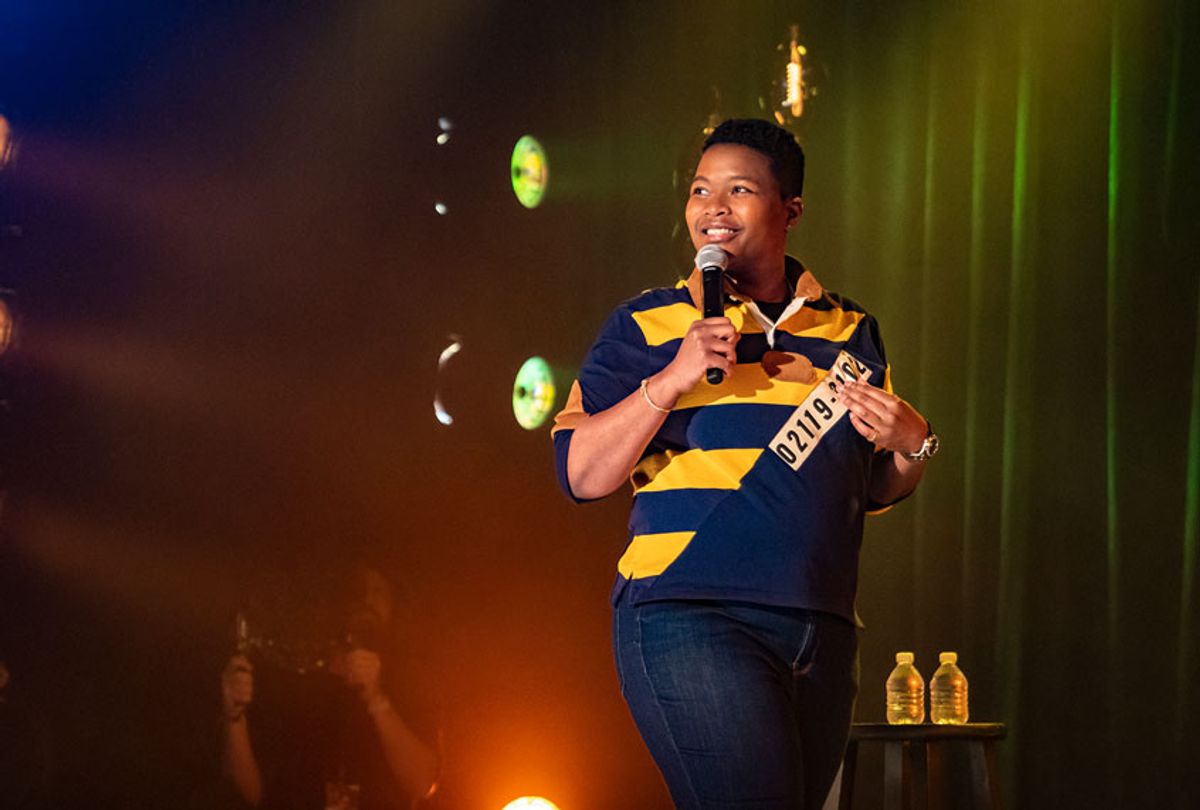 Midway through her first Netflix standup special, comedian Sam Jay describes how her approach to travel has changed as she's aged. She used to arrive at her destination and sleep all day so she could party all night, but her priorities have now shifted since entering her 30s. "I'm an old bitch, I want to see the architecture and the museums," she deadpans, waiting a beat before wryly adding that she still took mushrooms before she left the hotel.

It would have been easy at that point for Jay's set to go down the road of stoner humor — perhaps a few lackadaisical jokes about how weird the London streets look when you're very, very high — but instead, it takes a sharp turn towards discussing the "audacity of white people."

She describes walking into The British Museum and seeing room after room of artifacts obviously stolen by white colonists. When Black folks steal stuff, Jay says, they have the inclination to spread it out. But when white people steal from other cultures, they literally build a fortress for their stolen goods, charging $20 for entry. Jay assumes the voice of a posh British man addressing the plebeian masses, "Shoot them if they touch it."

Jay's debut special,"Sam Jay: 3 in the Morning," which was filmed at The Masquerade in Atlanta, is full of these snappy transitions from observational humor to more complex interrogations of sociopolitical issues, but she possesses a certain rawness in her presentation that simultaneously elevates jokes that fall onto well-trodden ground and imbues even most contentious political content with the familiarity of a discussion with a friend at a bar, both of you slightly tipsy.

Take her bit about air travel, for example, a topic mined by many a stand-up. It starts with a description of her girlfriend packing three (THREE!) bags for their trip to London, which leads to the infinitely quotable line, "Why are you packing bags you don't have arms for?" Then suddenly, Jay does another quick pivot and we're suddenly talking about her fear of death — and how maybe it's not death itself she fears, but rather survival?

And while in the hands of another comic these stream-of-consciousness meditations could easily sprawl into exasperating tangents (like in Pete Davidson's recent underwhelming special, "Alive in New York"), Jay attacks her set with a precision that shows that at her core she is both a writer and — perhaps more importantly — an editor who is comfortable leaving content on the cutting room floor.

Jay was a relative late-comer to the comedy scene. She didn't begin stand-up until she was 29, but since 2017, she has been a staff writer at "Saturday Night Live," where she's written standout sketches like "Black Jeopardy."

As Salon's Melanie McFarland wrote, that 2019 sketch is built on some of the same unexpected twists found in Jay's current special. "'Black Jeopardy'...lands its jokes by fooling the audience into thinking it knows how the contestant Kenan Thompson's Darnell sets up as the stooge will perform, then quickly turns that assumption on its ear," she wrote. "Chadwick Boseman's T'Challa from 'Black Panther,' for example, was entirely out of his depth when called upon to answer questions about American black culture."

So was Elizabeth Banks' character, Allison, who plays a white woman who doesn't see color ("So it's just 'Jeopardy' to me," she chirps) and Tom Hanks' Doug, who shows up to "Black Jeopardy" wearing a MAGA hat.

"Only after Allison realizes that she can't win regardless of what she does can she get points on the board — 'That is the blackest thing you said all day, Allison!' Darnell tells her," McFarland writes.

Jay's political analysis in "3 in the Morning" is equally attuned to the current climate and puts into words the frustrations many of us are probably experiencing — especially considering that this special was released in the middle of a pandemic to which the government response has been absolutely abysmal. Liberals like to defend the country, Jay points out. They like to say that the country is better than the president.

"No the f**k we're not," Jay says. "If we were, he wouldn't be the f**king president. We're better than Trump? We're a country of Golden Corral buffets. Who the f**k do we think we are? Trash. We're trash."

Troughs of macaroni, $9.99 prime rib, 99 cent hamburgers. That's who we are, Jay asserts with deep conviction, a tone that she carries into segments about her disdain for trans-exclusionary women, Greta Thurnberg, and the exclusivity of white feminists. These observations are built upon self-aware humor about the most marginalized aspects of her identity. Jay is the only Black openly lesbian writer in the "SNL" writers' room.

This isn't to say that the entire special is trapped in a stratosphere of $5 political terms.

Jay's standup is laced with profanity and a lot (I mean, a lot) of dick jokes, but she manages to make the transition between high- and low-brow seamless.

Inherent to most good standup is the ability to find and express the universal truisms in personal experiences, and Jay has this ability. Towards the end of her special, when she talks about how one of the things holding her back from parenthood is the idea that someone would be wholly dependent on her, I found myself nodding at the screen. It's such a tender observation. "That's so me," I thought. But then she makes another quick pivot, this time to how she wants to stunt on other moms when it comes to how much she spends on adopting a child. It's a take that is so uniquely Sam Jay — and it only left me wanting to hear what other turns she was going to take.

"Sam Jay: 3 in the Morning" is currently streaming on Netflix.