"We are all unreliable witnesses": Stellan Skarsgård on memory & his new film "Out Stealing Horses"

The actor spoke to Salon about his reading habits, family & the adaptation of Per Petersson's acclaimed novel 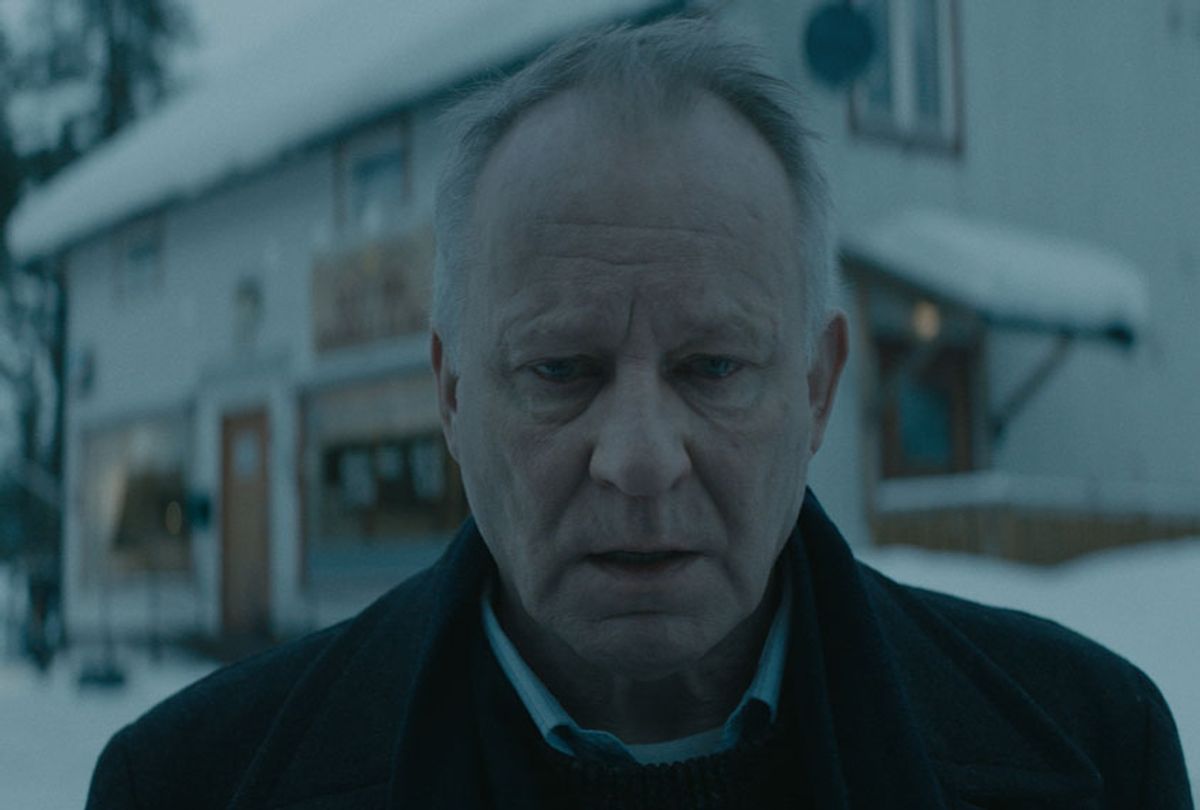 In "Out Stealing Horses," director Hans Petter Moland's artfully made adaptation of Per Petterson's bestselling novel, Stellan Skarsgård plays Trond, an aging recluse. It is the actor's fifth collaboration with the filmmaker — their last was "In Order of Disappearance," (which Moland remade in America as "Cold Pursuit.") The actor, who also can currently be seen in another literary adaptation, "The Painted Bird," however, is probably best known for his English-speaking roles in "Good Will Hunting," "Mamma Mia!," the "Pirates of the Caribbean" series, and several MCU films.

In "Out Stealing Horses" Skarsgård plays a man in 1999 looking back on his life. Trond says, "Life went well" and that he is "lucky," but he may just be in deep denial. Even when he mentions losing his wife in a car accident — Trond was driving — he says he feels loss, not guilt. Skarsgård's tough, steely performance convinces viewers that may be true, but as the film unfolds, Trond reflects back on a pivotal summer in 1948 when he was a teenager. Viewers will get a sense that his life may have been more difficult than he claims. A bulk of the film has 15-year-old Trond (Jon Ranes) living in a cabin with his father, (Tobias Santelmann). A tragedy involving a neighboring family sets a chain of transformative events in motion.

Skarsgård's portrait is full of gravitas and would be very at home in a film by his fellow Swede, Ingmar Bergman. (It's hard not to flash on "Wild Strawberries.") Trond allows Skarsgård to give a deep, internal performance. He cautiously expresses resignation as he asks his neighbor Lars (Bjørn Floberg) to join him for a New Year's Eve dinner. It is not just that Trond really just wants to be alone; Lars was involved in the events decades ago. Trond also is cagey in a scene where he is surprised by the arrival of another guest at his isolated cabin.

The actor who played a mean drunken father in Moland's "Aberdeen" and has worked regularly with Lars von Trier ("Breaking the Waves," "Nymphomaniac"), spoke with Salon about his new film, fathers and sons, and his thoughts on the past.

Trond reads Dickens. What do you like to read, and had you read Per Petterson's novel before signing on to this film?

I read Dickens when I was a kid, but I read a lot. I read more than I watch movies. There's so much to catch up with I don't think I'll read everything I want to before I die. I've read a lot of nonfiction during corona[virus quarantine] while isolated, but I read Victor Klemperer's "I Will Bear Witness." It's a diary that is not written in hindsight. As a Jew in Germany, he does not know from one day to the next what will happen — but we do. Sitting around, locked up, it's good to read something that does not make you feel sorry for yourself.

I read "Out Stealing Horses" before I was sent the film. I was approached 10-15 years ago with a script that was no good, so it never happened. And then it landed with Hans Peter Moland, and he captured the poetry and the power of the Nordic nature, which is difficult to make a film out of. Hans is an outdoor man who grew up in those forests. I'm very much a city boy.

"Out Stealing Horses" is really about managing emotional pain. Can you talk about this theme? Many of the characters you play are men who are troubled. What draws you to a character that wants isolation.

I don't know, because I am not very brooding myself. I don't dwell on the past, I'm pretty cheerful. I'm interested in people in general and whatever problems they have or don't have. If you're not doing a popcorn movie with shallow characters, then you want to find something that the characters are very often not deliberately expressing and tell that in the way you move. It makes the audience fill in blanks.

The film shows the critical moments of change in Trond's life. How he copes with tragedy and loss but also how he chooses not to be angry. Can you describe how you cope with tragedy and change, and how you create a character that does this?

In my personal life, I've been devastated and happily in love but, I haven't had a big trauma to deal with in my life. It's about digging into and imagining the resilience in yourself about what it would have been like for this character. The fantastic thing in the film is that you have the voiceover and flashbacks that tune the audience into what the problems are. The audience will carry that luggage with them. When it comes to treating trauma, it depends on who you are. I'm a moving forward person, but Trond is not. I haven't had a trauma like the one that affects Trond, who has been carrying a betrayal around all his life. He doesn't understand it until he is an old man and is now repeating the same mistake.

Trond opens the film stating his life went well and that he is lucky. Is he an unreliable narrator?

It's true to him. What is fact, I don't know. If you have ever known a couple divorcing, there are two different versions of events leading up to the divorce, and they are both true. We are all unreliable witnesses in a way. He isn't fabricating anything, but the chain of events is true. I didn't treat the character as someone creating a fictional past. The story doesn't need that. The betrayal [Trond feels] is strong enough as it is. He's in denial, but he works himself to a point where he sees what it was. But that is about accepting his father as a human being and not as a God.

"Out Stealing Horses" is a great father/son film. What observations do you have about your family, and your relationships with your father and sons?

I had a fantastic father, who lived to 77, but he was incredibly flawed. He was absurd in many ways, but he always treated me like an equal, so I never had to tear him down from a pedestal or have the disappointment in puberty when you realize your dad is just a man. He never hid his weaknesses, so I could love him for who he was all his life. I have seven sons, and I have a different relationship with each one. I tried to repeat my father's way of showing weakness in front of them and not being a know-it-all or interfere too much in their lives, and make them trust me as a friend. I've got a good relationship with all of my eight children. [Skargård also has a daughter.]

You are a frequent collaborator with Lars Von Trier. This is your fifth film with Hans Petter Moland. What are your thoughts about working in Nordic cinema?

I don't care where the films are made or in what language. I've done two Swedish films in the last 30 years.  It depends on the collaboration. Scandinavian cinema is very small; there are 5 million Danes, 5 million Norwegians, and 10 million Swedes and there are four languages. But we have a strong film industry. It's heavily subsidized. I'm not familiar with everything produced here, but we do produce interesting directors regularly, and that is quite vital.

You are also currently in "The Painted Bird" and have "Dune" coming up. Since this is a film about looking back on life, what observations do you have about your career, the choices you've made, and the roles you play?

I don't know. I spend little time looking back on my life and little time dreaming about future. I'm enjoying the present very much. I've been incredibly fortunate to do interesting independent films made for different reasons than the big Hollywood blockbusters I've done. And I've been able to become more bankable to get a small film financed.

I made "The Painted Bird" not because I was perfect for the role, but because it was important to finance. It was a film I wanted to make. Harvey Keitel and Julian Sands came on eventually, but "Bird" is like "Out Shooting Horses" — a very cinematic film that you barely see anymore. It's not dialog driven; the story is not verbalized. The power of the images have a significant importance in telling the story. Watching "Bird" is like watching a European arthouse film from the '60s, when everybody watched arthouse films. When I saw "Bird" in Venice, I was happy it was so incredibly beautiful and devastating, but it was nostalgic, too.

What are your thoughts about self-reflection and having a good life?

I glance back now and then. I still have small children and I'm cooking for eight children and two wives and working too, but, of course, I think about it. But I'm not analyzing myself and my life very much. I make quick judgments about what I've done right or wrong. I might be careless in a way, but if I aim for something in my life, it's not perfection because that is unattainable anyway. Life should be moving, exciting full of love and friendship and people and good books and incredibly good food of course!

"Out Stealing Horses" comes to theaters and on demand on Aug. 7.