This 169-minute, black & white adaptation of the controversial novel is unrelenting in its violence and despair 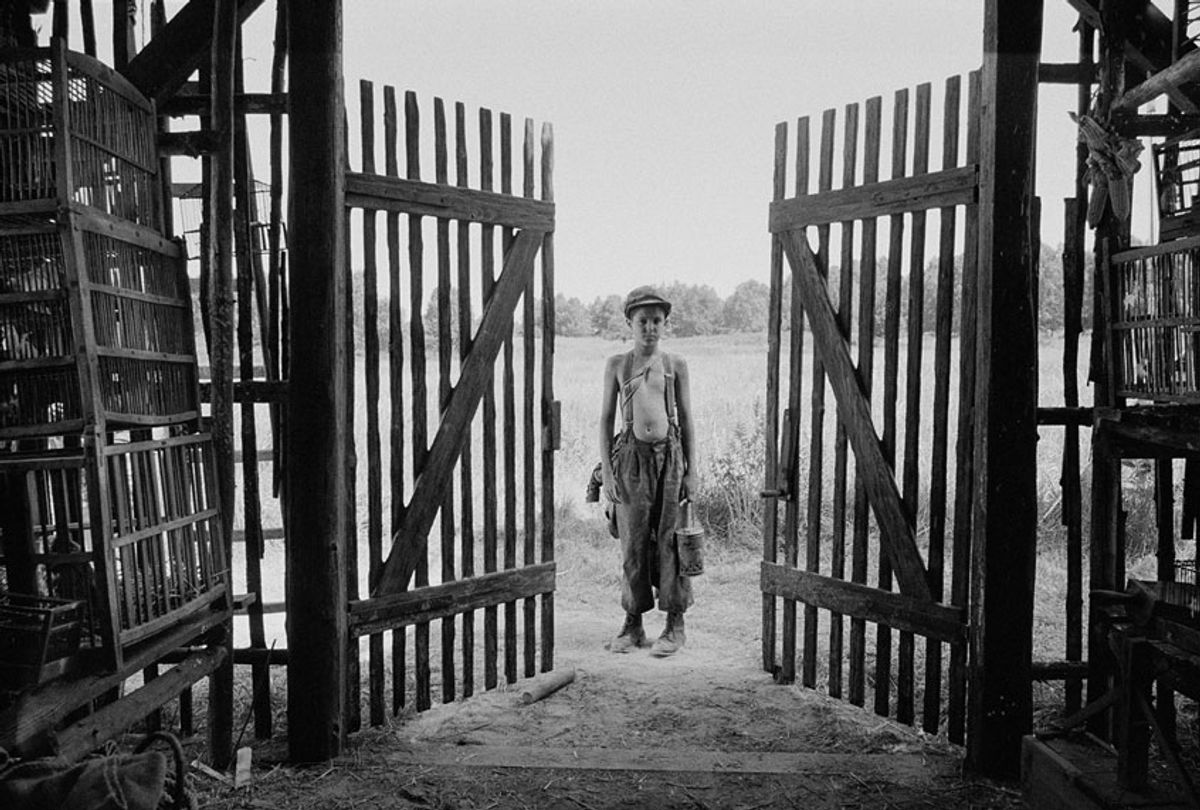 "The Painted Bird" has been controversial ever since Jerzy Kosinski first published his novel in 1965. The grim story, about a young boy trying to survive in Eastern Europe during WWII, features acts of violence as well as sexual violence that reflect degradation and despair. Moreover, Kosinski initially claimed the book was semi-autobiographical; though it was later suggested that was not the case. The author also faced allegations of plagiarism during his career.

Czech filmmaker Václav Marhoul has now adapted the novel for the screen, creating a luminously filmed (in 35mm) intimate, 169-minute epic about the horror of war, the impact of hatred, and the loss of innocence.

"The Painted Bird" is as bleak and unrelenting as the Eastern European farmland where the story begins. A nameless young boy (Petr Kotlár), experiences an act of violence in the opening moments that sets the tone for much worse to come. He lives with Marta (Nina Sunevic) an elderly woman, who dies one morning. The situation sets him off on a picaresque journey, the purpose of which becomes clear in the film's end. Marhoul films each episode as a segment introduced by a title card that indicates the character the boy will meet.

As such, he is soon bought and enslaved by Olga (Ala Sakalova), a gypsy, who has to manage when the boy becomes sick. She buries him up to his head, and he is pecked at by birds. (It's ghastly, but a such a striking image; it even adorns the film's poster). The boy is then passed on to Miller (Udo Kier), who fears his wife is cheating on him and gets a nasty form of revenge on the man he suspects. This sequence yields another vivid image, albeit a far more unpleasant one.

The boy next meets a drunken old man, Lekh (Lech Dyblik), and Ludmila (Jitka Cvancarová), a woman Lekh has sex with. Lekh keeps birds and paints one to send up to a flock which leads to a brutal, yet wondrously shot scene that makes this screen version of "The Painted Bird" is so hypnotic and sets up the film's grand metaphor.. Viewers cannot help feeling compassion and being sympathetic towards the film's young hero who experiences so much rejection and death at such a young age. Over the course of the story, he becomes hardened not just by what he observes but also by the lack of love he receives.

Moreover, the character of the boy is perceived at different times to be a Jew or a gypsy; he becomes an altar boy; he is also told to embrace Stalinism, and "act like a Communist." His identity keeps shifting as he learns how to behave to stay alive. This is arguably the most interesting aspect of "The Painted Bird," and best illustrated in a scene where a Jewish man spits on a Nazi officer's boots and is shot, while the boy polishes the boots and survives. The film's point about the malleability and adaptability of the boy (and by extension, humanity) resonates.

Marhoul's style, which is often stark, and often employs silence — there is minimal dialogue throughout the film — allows viewers to engage with the action as this storyline unfolds. Part of the director's approach is to showcase the boy's blank expressions as he observes the people he encounters. What is compelling is seeing how he sizes up and processes the various men and women he meets, all of whom rely on him for company, or exploit him (or both).

Even if "The Painted Bird" rubs the viewer's (or reader's) nose in wartime atrocities, abusive behavior, and graphic violence, and rape, the film can still make a claim of being life affirming. This is a tale of resilience, endurance, and survival, however true or invented. When the boy finds an injured horse, he walks with it, and cares for it, hoping to help a creature wounded like he is. What transpires may be soul-crushing, but the boy has hope.

For all of Marhoul's bold conception and presentation of the misery, he is thankfully, never manipulative. Yes, it is horrendous to see a woman being violated or an animal being abused, but the film depicts most of the horrors in a way that does not cudgel viewers.

As the film progresses, there is a build-up of unrelenting depravity. The boy is sent by an ailing priest (Harvey Keitel) to live with Garbos (Julian Sands), who, it is revealed, is a pedophile. The boy escapes this ghastly situation in a clever way that shows his wits, but his next encounter, with Labina (Julia Valentova), is also fraught with peril as she has her own particular urges.

Suffice it to say, things, of course, get increasingly worse as the story progresses, and Marhoul includes several elaborate sequences of death. One involves a trainload of Jews trying to escape that ends in tragedy. The other depicts an elaborate Cossack raid on a village, with killing, rape, and more. These sequences are masterfully filmed and lead to the boy's bonding with a soldier, Mikta (Barry Pepper), who gives him a gun that he will use before the film's end.

"The Painted Bird" traces the boy's coming-of-age in a way that shows him mature and change over a short period of time, although the film is ambiguous regarding how much time has passed over the course of the story. What is important here is that he transforms from a sensitive, bullied youth to a killer, defending his honor. He has nothing left to lose after suffering so many indignities.

Petr Kotlár is exceptional as the boy, and the supporting cast serves him well. Marhoul not only secured fascinating actors for key roles, but he photographs them in ways that magnify their intense performances. A close-up on the furious Udo Keir right before he attacks his victim, or a shot of Julian Sands, hitching up his pants after committing rape, are vivid images.

"The Painted Bird" is a potent, visceral but rewarding film for viewers who can withstand the onslaught of traumatizing moments.

"The Painted Bird" available in select theaters, digital and on demand beginning July 17.