Toxic workplaces are awful and nothing new in Hollywood. But if Ellen weren't the Queen of Nice, would we care? 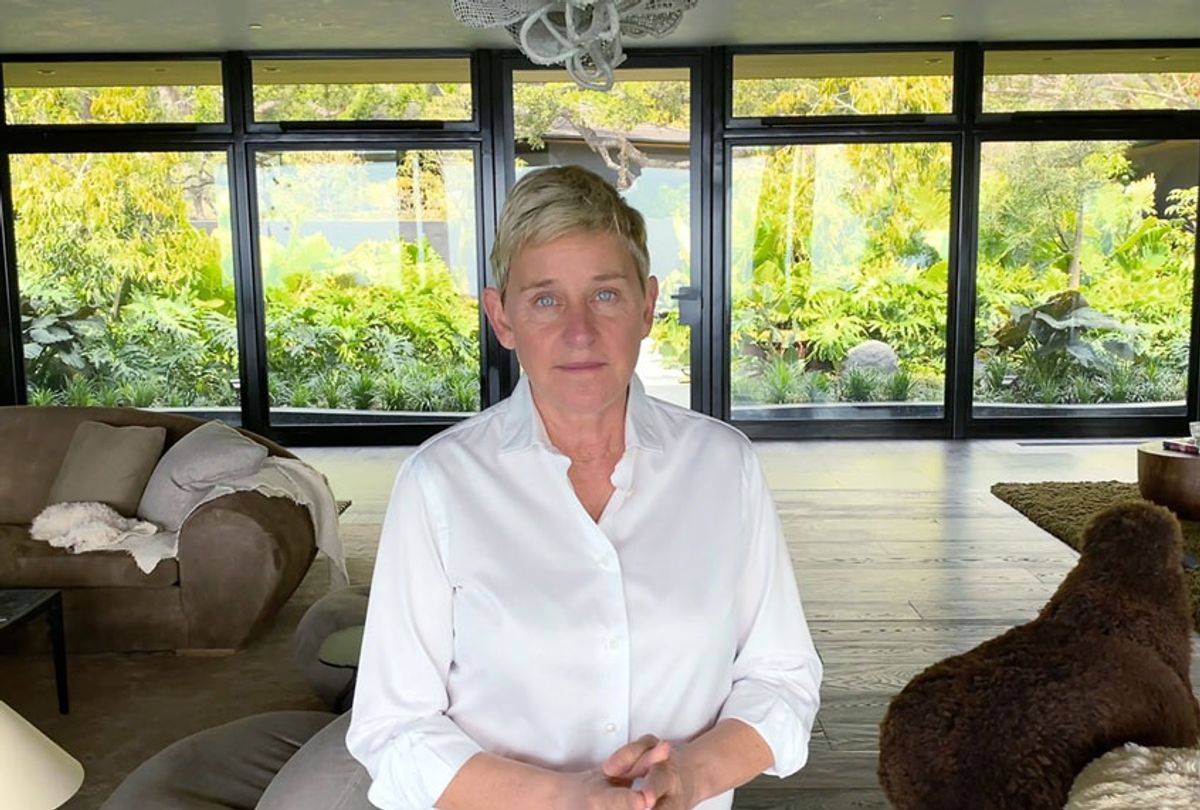 When the ultimate moral of the Ellen DeGeneres story is written many years from now, it may include counsel to be careful about mantras.

"Be kind" may seem like an easy phrase to live by and a surefire winner with the daytime talk show audience. In reality, it is an impossible bar for anyone to consistently meet or exceed.

Think about it. When was the last time you had to be demonstratively kind for a sustained amount of time in public? Can you be kind to everyone who interacts with you on the worst day of your life? Can you smile and dance while you're being dogged by rumors that you are actually, to quote one of the tweets that may have kicked off the daytime talk show host's reputation plummet, "notoriously one of the meanest people alive"?

None of this is said to empathize with the eponymous host of "The Ellen DeGeneres Show," a woman who has zero need for my empathy or anyone else's. I don't have any emotional attachment to Ellen one way or another, and in the court of public opinion case of The People v. the Queen of Nice, I find in favor of her former and current staffers alleging that DeGeneres's "be kind" motto is just for show.

Instead, whatever fascination there is to be had in this evolving story has to do with its status as a collision point between the industry's recent push to excise volatile, abusive leadership from its ranks – which may also be just for show when all is said and done – and a litmus test for the double standards powerful women contend with when a scandal lands on their doorsteps.

Until a July 16 BuzzFeed News story and its July 31 follow-up brought to light reports depicting DeGeneres's workplace as a toxic pool of racism, sexism, sexual misconduct and garden-variety cruelty, rumors about the talk show host's not-so-niceness were occasional blips a person stumbled across on Twitter, one of those chin-scratchers to be shared as party gossip.

Now, Ellen DeGeneres joins an illustrious line of women in Hollywood rumored to be difficult to work with or for at best, monstrous at worst. That she's risen to the level of being a subject of an unknown quantity of quintessentially Los Angeles horror stories puts her in the same league as the legendary Faye Dunaway whose notorious rampages left such an impressive trail of terror in her wake that for a time it seemed like everybody knew somebody who had survived one of the actress' unpredictable mood maelstroms.

But the "Mommie Dearest" actor wasn't the boss in charge of a series employing tens of producers, writers and assistants, or a living, walking name brand with an estimated net worth of $330 million.

Neither did she ever build her empire on a foundation of cheerful dancing, charity, and calls for kindness, as DeGeneres does in her syndicated series that's been airing since 2003.

And, this is important, if DeGeneres does indeed deserve her badge of meanness – and I have no proof that she doesn't – she's done a bang-up job of keeping her ill temper out of public view, whereas Dunaway paraded it before the great unwashed with aplomb. Such toxicity is commonplace across entertainment, a hierarchical industry that rewards lucrative products and the people who create them with undue tolerance of abusive behavior.

This is an extension of the longstanding myth that genius and volatility go hand and hand; it probably goes without saying that such behavior is excused, even praised, in men while equivalent behavior in women brings out the pitchforks.

Save, that is, in extraordinary cases like that of DeGeneres and her syndicated daytime show. As my colleague Gary Levin pointed out in a recent USA Today story, "Ellen" is the No. 3 talk show in syndication, averaging 2.4 million viewers per episode last season. It also runs in markets across the country in a variety of timeslots and on stations affiliated with various networks.

On the flipside, there's that impossible bar of "be kind" that set her up to fail spectacularly, even when she may have been on her best behavior, whenever that may have been. During the pandemic DeGeneres hired a non-union tech company to record her show remotely from her palatial home while leaving her core staff in the dark about their employment status and pay for more than a month, according an April report in Variety. When the 30 or so employees finally heard from executives nearly all were told to expect a 60% reduction in wages.

Finding joy in felling giants is one of the peculiar flaws of the human condition, even if we don't necessarily care about the great one being kneecapped. But it is that mask of cheerful kindness and those years of dancing that makes DeGeneres a ripe, luscious target.

This was true long before she invited Kevin Hart onto her show shortly after he bowed out of hosting the 2019 Academy Awards host due to controversy over a track record of homophobic tweets and jokes, voicing her support while calling his critics "haters" and even contacting the Academy of Motion Picture Arts and Sciences to speak on his behalf. The October 2019 photo showing her being friendly at a football game with former president George W. Bush, a vocal supporter of banning gay marriage, wasn't a good look either.

All of that would have been forgivable if DeGeneres were otherwise true to the word she urged her audience to live by: kind. Based upon the numerous reports about the shoddy way that the daytime talk show host and her producers treated her staff,  DeGeneres is falling spectacularly short of practicing her own advice. That much has been established.

Although the show's producing and distributing studio Warner Bros. is investigating the workplace misconduct claims revealed in BuzzFeed's coverage, and one of its senior producers, executive producer Ed Glavin, has been ousted, there are no stated plans for DeGeneres herself to leave the show, especially given the two-year contract extension she signed last spring.

What about the toll of so-called (but actually impotent) "cancel culture"? This is where the view gets interesting. Although the number of former staffers coming forward with their accounts number in the dozens, there's little specific anecdotal reporting that the nastiness emerged directly from DeGeneres herself, even though a few celebrities have said that was the case.

And yet. Here is a woman who survived one of the earliest and most evident instances of cancellation in 1997, when she came out on her ABC sitcom and was rewarded by becoming persona non-grata in the industry for years afterward; also, here is a powerful woman. The closest albeit imperfect equivalent I can think of to DeGeneres' situation is Martha Stewart's fall in 2004, when she served a five-month prison sentence for lying to investigators concerning the ImClone stock trading case.

Stories about Stewart's abusive, demanding behavior behind the scenes of her successful daytime series followed her like mean spirits until she was carted off to jail – the only person associated with the case (other than ImClone founder Samuel Waksal) to serve time. But was her punishment lying to the Feds . . . or being the fun-to-hate Martha Stewart?

"Like Tina Brown, of the defunct Talk magazine, or Carleton S. Fiorina, the chief executive of Hewlett-Packard, Ms. Stewart, who is 60, has become a Rorschach test of women's and men's anxieties about female success," declared a 2002 New York Times story. It goes on from there:

Her fans have long known, and do not mind, that Martha Stewart is a lot tougher than she looks. But in the long run, this latest refraction of her image could prove more damaging to her reputation than complaints that she is an über-perfectionist who turns chilly and imperious once the kitchen door closes. The Martha Stewart media and marketing empire is intimately woven around her persona. Greed or the misuse of privileged information, if proven, was never part of the package.

And the public punished her for this. Martha Stewart Omnimedia, whose stock nearly tripled in value on the day it went public in 1999, was "sold for parts" in 2015. "Now, one share of Martha Stewart Living Omnimedia isn't worth the price of a Martha Stewart-branded meat tenderizer or a small Martha Stewart food storage container at Macy's, or even eight ounces of Martha Stewart garlic hot sauce on eBay," quipped a Washington Post write-up.

These days Stewart isn't exactly hurting for cash, having resurrected her image with a Snoop Dogg glow-up. A recent Instagram thirst trap she posted proves she's still determined to live her best life. She's still very, very wealthy – just not as wealthy as she used to be.

Bringing us back to DeGeneres, who has her own lifestyle brand, ED by Ellen, and a vast audience that I'm betting probably doesn't care much about behind-the-scenes reports of meanness in the Queen of Kind's kingdom. A share of viewers likely expects her to do some public mea culpa when her show's new season debuts on Sept. 9, but whatever sword she falls upon likely will be the size of a cocktail pick.

In the world of entertainment, few burns are more painful that those resulting from spilled tea brewed from a bag of veracity, and DeGeneres is smarting from precisely that kind of agony right now.

But she wasn't the handsy one at the center of Warner's sexual misconduct reports; that guy has been fired. In the allegations of racism and managers firing people after taking medical leave, supervisors and managers committed those transgressions, not the Queen herself. Is this precisely how a well-oiled toxic workplace runs? Of course. The boss never sullies her hands with the not-so-nice stuff. She has people for that.

But the new season of "The Ellen DeGeneres Show" won't debut for another month – more than enough time for more dirt to come out, for damage control, and just as likely, for her millions of fans to forget this ever happened.

DeGeneres gave a rare interview to the New York Times in 2018 to promote her Netflix stand-up special "Relatable," a routine that among other subjects, revolves around the truth that living up to her image of always being nice is exhausting.

You might watch that special now and search for clues betraying the "real" Ellen behind the mask of kindness, if you like. You might take in an episode of "Ellen's Game of Games" and search her face for flickers of sinister glee as she sends losing contestants screaming down vacuum tubes to places unknown.

You can read that New York Times piece's opener that declares "Ellen DeGeneres got sick of dancing, and really can you blame her?" and find an excuse for the meanness, that maybe this is a person burned out, collapsing under the imposition of the motto that made her a fortune and won her a spot in millions of hearts.

Or you can read a little further, to the reporter recounting a moment in which the host is tempted to make a cruel joke at the expense of a little girl singing to her father, and look at DeGeneres' insight as to why she held back. Speaking of her show, DeGeneres said,"It's escapism for what's going on, one hour of feeling good . . . At the core it's a comedy show. But if it's not funny, at least it feels good."

The people who aren't feeling good about Ellen DeGeneres these days will be all too happy to come for her, and they will not be kind. Left open is the question of whether, when this all blows over, she'll feel the need to be.

The new season of "The Ellen DeGeneres Show" debuts on Sept. 9.