Chuck Todd haters, we take your point – but it doesn't look like he's going anywhere

When Todd should have reclaimed the mic from a guest who came prepared to steamroll him, he got flattened – again 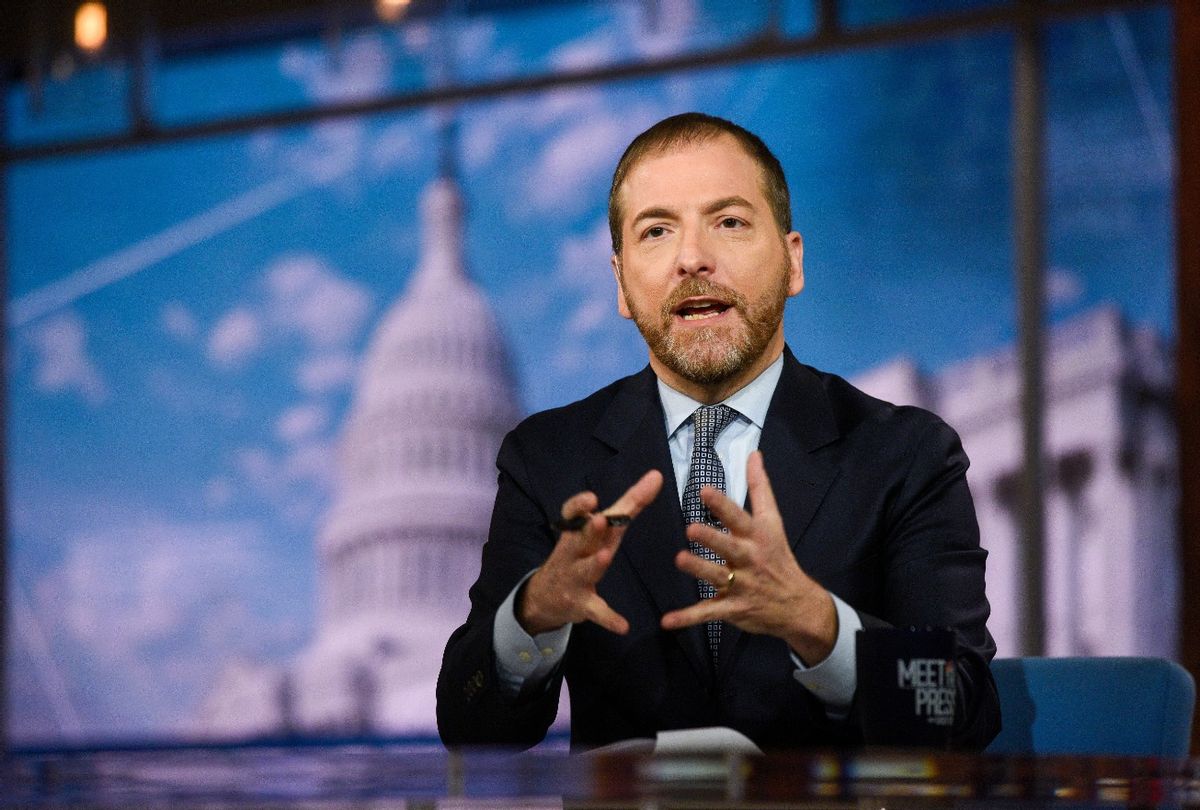 "Meet the Press with Chuck Todd" (William B. Plowman/NBC)
--

Hating on Chuck Todd is easy 'cause he's terrible.

That's the general consensus at which Twitter has arrived about the MSNBC host and "Meet the Press" moderator. And at the risk of arousing the rage of the social media mob, it's not quite fair.

Instead, I think it's more accurate to say that Todd is the poster model for journalistic ineptitude. His claim to fame may be his inability to push back on fallacious claims and outright lies, but he's far from alone in that. The White House press corps struggles to push back on a lot of this administration's unfounded claims, or has given up trying.

It's just that Todd is the most recognizable face of this industry-wide failure.

Todd's haters crowed about this demotion even as Variety, which originally reported the news, framed it as an expansion. The host is launching a weekly political program on the network's live-streaming outlet NBC News Now as well as on Peacock, NBC Universal's "free as a bird" streaming-video service, in September.

This also signals MSNBC's intent to make changes beyond Joy Reid's recent addition to the lineup to make it less white and less male. But to be clear, NBC News isn't expanding Wallace's role out of some gesture towards gender equity or to balance out out its late afternoon and prime time lineup's liberal skew, although the former Bush administration official is MSNBC's version of a center-right presence.

No, Wallace is taking over the "MTP" 5 p.m. slot because her lead-in telecast was getting higher ratings than Todd's, giving the cable news network a better shot at competing against Fox News' dominant program "The Five" and Wolf Blitzer's "Situation Room" on CNN. And that's not great!

However, before you start ordering the crates of Champale for that #ChuckToddIsOverParty, you might want to hold off. As if to acknowledge the battering that their anchor's reputation is taking, NBC sent out a press release on Monday declaring a Sunday victory for "Meet The Press" over CBS's "Face the Nation," ABC's "This Week," and "Fox News Sunday." NBC might not be ecstatic about Todd's daily coverage, but for now, they're quite fine with the numbers behind the network flagship telecast of "Meet the Press."

So, is this a demotion? Todd remains the anchor of pre- and post-event programming connected with live event coverage, including the major party conventions later this month, debates, and Election Night. ( A recent New York Times report also mentions that Wallace allegedly was proposed as a replacement for Todd on Sunday's "Meet the Press," but the network shot that down.)

Political news junkies may not love that fact, but he's better suited to handle after-the-fact political analysis than, say, handling interviews with Donald Trump or his surrogates . . . or serving as a presidential debate moderator. In those forums he consistently proves to be NBC News' weakest link.

(Remember when he found a way to make last June's first Democratic debates about him? This statement isn't merely a matter of opinion, it's an impression backed by data: A tally of words spoken during the debate put him in fourth place behind former Democratic presidential contenders Cory Booker, Beto O'Rourke, and Elizabeth Warren.)

But Todd's critics are right to view the network's celebration of his Sunday success with skepticism if not outright disdain, considering how necessary "Meet the Press" was to informing political dialogue in the era of the late Tim Russert.

Under Todd it continues to provide a platform to guests devoted to spreading distrust and cloaking those intentions in supposed good-faith discourse, knowing that the show's current host will do little to nothing to push back on them. But then, that's the way these shows have been running across the board. MSNBC, CNN and the Sunday political talk shows welcome White House advisors onto their programs because that is tradition, ignoring that the men and women holding these positions are as far from "traditional" choices as they can get.

There's a way to handle these surrogates, certainly. Jonathan Swan's Axios interview shows in the most basic fashion that it's possible to expose a skilled liar for what he is, even if that liar happens to be America's most powerful politician.

A person in Todd's position – which is to say, a network anchor and host who also holds the position of NBC News' political director, responsible for the network's political coverage – should have learned enough from his many gargantuan failures in recent years to not be stomped upon by a Trump goon.

And yet that is exactly what happened on Sunday's "Meet the Press," when White House trade adviser Peter Navarro floated an alarming "theory." The Democrats, he said, "would prefer to see the economy go into the tank for another 90 days because that harms the president," adding, "I hope that that Capitol Hill hasn't become that cynical, but watching this negotiation, it makes me wonder."

You know – just a musing drawn out of thin air.

How did Todd clap back at that plainly partisan slander? In part with the phrase that sent a crowd of viewers into a fury: "I take your point."

To the incensed viewer, that line was on par with Trump's damning, "It is what it is," line, used to shrug off a question to which he had no answer. In this context, Todd either could not or would not reclaim control from a contentious guest intent upon muddying the conversation when he couldn't come up with a decent answer to the question of why President Trump was at his golf club all weekend while millions of Americans were kept on tenterhooks to find out the status of their expiring unemployment benefits.

But the exchange was a debacle long before that: when Navarro asserted that "the Lord and the founding fathers created executive orders because of partisan bickering and divided government." This is risible assertion to anyone with the slightest understanding of what the First Amendment is all about, let alone how the Founding Fathers viewed any concept of involving "the Lord" in government. (The TL;DR version: "Father of the Constitution" James Madison? Not a fan of mixing church and state.)

To this nonsense, Todd uttered nary a peep. And this is why the network's hailing of that particular "Meet the Press" ratings win should be alarming. In a circumstance in which Todd should have reclaimed the mic from a guest who came prepared to steamroll him, he got flattened. Again.

In the coming weeks, the Sunday "Meet the Press" broadcast and other topical news series known for political analysis can be crucial tools to help the broadest viewership to figure out how policy proposals and future executive orders will affect their lives. Now that Kamala Harris has been announced as presumptive Democratic presidential nominee Joe Biden's running mate, Todd and other network political series hosts have an opportunity to dig in with tough questions and do their part to dispel vicious rumors and fabrications. And yes, Biden has busted out his share of tall tales and incorrect recollections too.

And since I opened by calling Todd's villainizing by the Twitterati not quite fair, an excerpt NBC's official transcript places the offending line in context. Here's what followed Navarro's stated hope that Capitol Hill wasn't "that cynical":

I think the cynicism is a two-way street.

Mark Meadows is a great negotiator.

I take your point --

He is willing to bend.

Well, I think he has a reputation of killing more deals than he does of solving them --

Let me move to your other job.

Does that make Todd look any better? Of course not. Nor should the audience accept that when it comes to his position as NBC's arbiter of political coverage, it is what it is.

Todd may have been bumped out of his plum position on the mainstream MSNBC platform, and Peacock launched only recently . . . and has its own usability struggles to overcome before it can be considered a heavy player in this space. But the sobering fact is that for the time being, we'll be living with him.

He's not terrible. Instead, he's something a good deal more depressing in our "it is what it is" age of apathy, corruption and death. Among his kind, he's typical.

(By the way, I also typed that opening line to tempt any Minnie Riperton karaoke impersonators bored enough to craft a Todd-themed version of "Loving You." The pandemic has us all trapped in our feelings, go nuts!)