A genetic study reveals which animals can contract coronavirus 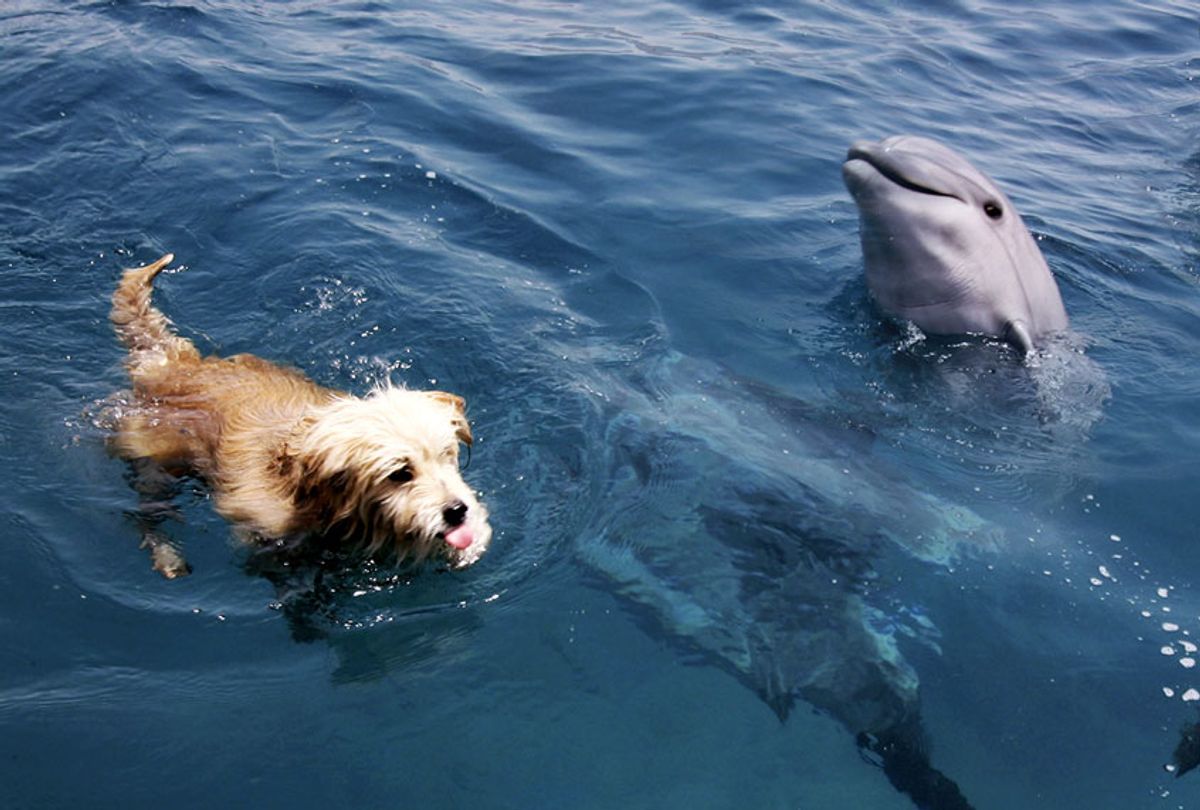 A dog and dolphin enjoy a swim together in the Israeli Red Sea resort of Eilat. (David Silverman/Getty Images)
--

Researchers at the University of California, Davis, figured out a clever way to deduce which animals are susceptible to the novel coronavirus — without putting any of our animal friends at risk by intentionally infecting them.

According to the study, which was published in the Proceedings of the National Academy of Sciences of the United States of America (PNAS), any animal that has the same enzyme which SARS-CoV-2 uses to infect human beings is also at risk of infection from the novel coronavirus. The enzyme in question, ACE2, is found in a number of different cells in the human body, including the epithelial cells (a type of surface cell) on the lungs, nose and mouth. In order to infect humans, the novel coronavirus binds itself to 25 amino acids of the ACE2 enzyme.

Prior to this study, scientists knew that certain animals could contract coronavirus based on real-life cases. Dogs, for instance, were already known to be susceptible, and there have been multiple cases of dogs around the world contracting it. Last month Buddy the German shepherd, the first American dog to test positive for COVID-19, died from the disease. Both house cats and big cats are known to be susceptible, too, although no cats are known to have died of coronavirus. A Malayan tiger and three African lions housed at the Bronx Zoo in New York City contracted the coronavirus, though all appear to have mostly recovered.

Yet the UC Davis researchers' study had some surprises as to which animals were susceptible. Notably, their list includes several threatened species.

"Among the 103 species that scored very high, high, and medium for ACE2/SARS-CoV-2 S binding, 41 (40%) are classified in one of three 'threatened' categories (vulnerable, endangered, and critically endangered) on the International Union of Conservation of Nature (IUCN) Red List of Threatened Species, five are classified as near threatened, and two species are classified as extinct in the wild," the authors write. "This represents only a small fraction of the threatened species potentially susceptible to SARS-CoV-2."

Other animals that are believed to be able to contract coronavirus, based on this genetic study, include 12 cetaceans including dolphins, many different species of rodents, three types of deer, the Angolan colobus monkey, and giant anteaters.

While the researchers urge against overinterpreting their results, they note that these other animals could theoretically serve as new avenues for transmission. "These species represent an opportunity for spillover of SARS-CoV-2 from humans to other susceptible animals," they write. Fortunately, so far, animals that have been observed to contract coronavirus do not seem to be particularly infectious. Indeed, the Centers for Disease Control and Prevention (CDC) emphasizes that there is no evidence that infected dogs or cats can transmit the illness to human beings.

"The virus that causes COVID-19 spreads mostly from person to person through respiratory droplets from coughing, sneezing, and talking," the CDC explains. "Recent studies indicate that people who are infected but do not have symptoms likely also play a role in the spread of COVID-19. At this time, there is no evidence that companion animals, including pets, can spread COVID-19 to people or that they might be a source of infection in the United States."

Salon spoke with Klaus-Peter Koepfli, a co-author of the study as well as a senior research scientist at the Smithsonian Conservation Biology Institute and a professor at George Mason University. He emphasized that, while we do know that human beings can pass the disease on to animals, scientists are unsure of the implications for pet owners.

"Your household pets are likely to be in your immediate vicinity, of course, at home and socially distanced from other household pets and other homes," Koepfli told Salon. "But again, it's not clear to me exactly whether, if somebody at home gets infected, whether they're likely to pass that infection off to their pet cat, or which is among the species that's likely to be the most at risk."

He added, "There is a particular group of hamsters that we found to be in the high risk category — those are like the Chinese hamsters, but I don't think these are the type of hamsters people have as pets commonly. It's really hard to say exactly because we need more studies to actually see what the chance of infection from people in their households are, how often this can be transmitted to humans. Those types of studies are very hard to do in a systematic fashion."