Why the NBA strike is so unprecedented

"We are in uncharted territory," sports editor and critic Dave Zirin tells Salon 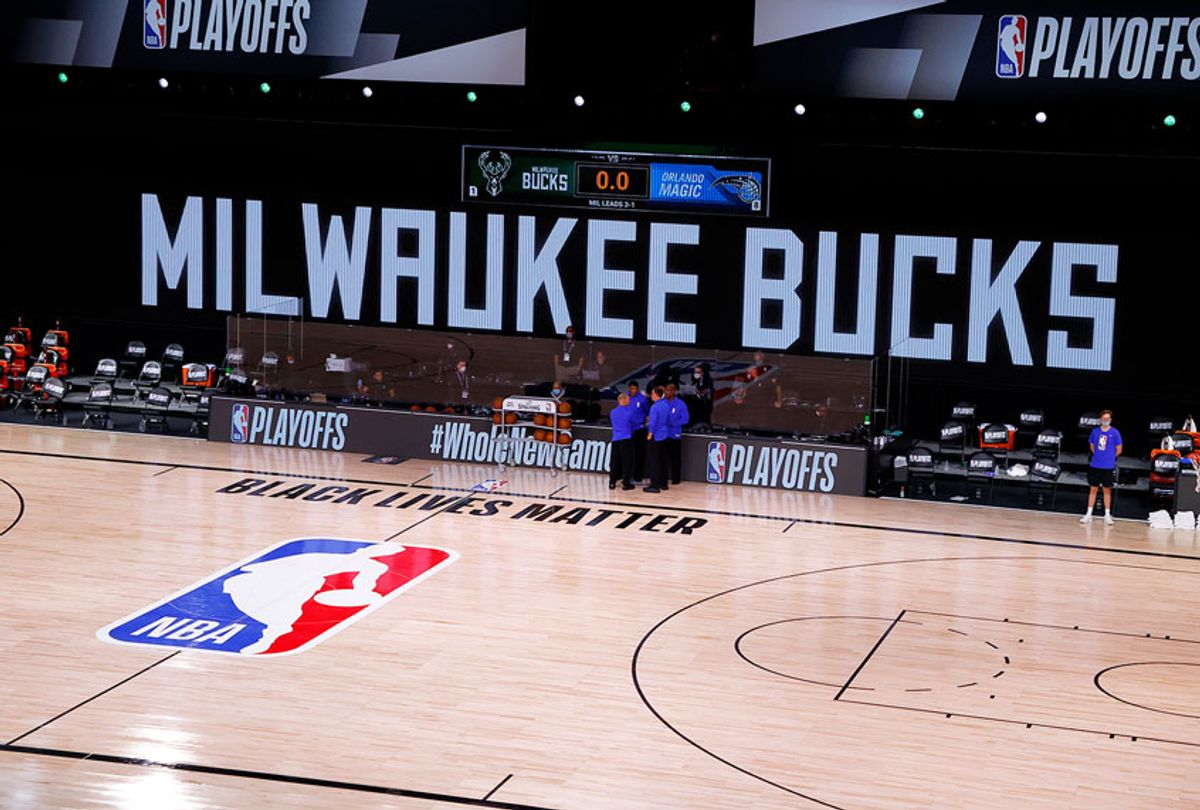 Referees huddle on an empty court at game time of a scheduled game between the Milwaukee Bucks and the Orlando Magic for Game Five of the Eastern Conference First Round during the 2020 NBA Playoffs at AdventHealth Arena at ESPN Wide World Of Sports Complex on August 26, 2020 in Lake Buena Vista, Florida. (Kevin C. Cox/Getty Images)
--

American athletes have advocated for political and social change for decades, in ways that often brought them into conflict with coaches, owners or the general public. But labor historians and sports journalists alike say that the NBA strike, initiated by the Milwaukee Bucks that arguably qualifies as a wildcat strike, is without precedent in the history of American labor or American sports.

On Wednesday, the National Basketball Association team boycotted a playoff game against the Orlando Magic, scheduled for that day, as a form of protest on behalf of Jacob Blake, an African American man who was shot multiple times in the back by police officers in Kenosha, Wisconsin as he leaned into his car. Three of Blake's children were in the backseat of his vehicle when the officers shot at him.

The Bucks players' decision  was not made in a vacuum. According to ESPN, many NBA players had expressed reservations about playing before the Blake shooting because of other cases of allegedly racially-motivated police violence, most notably the deaths of George Floyd in Minneapolis, Minnesota and Breona Taylor in Louisville, Kentucky. Yet when the Bucks decided to sit out their game against the Magic, they set off a chain reaction: The Houston Rockets and Oklahoma City Thunder also decided to sit out their games, and then the NBA postponed both those games and an upcoming game between the Los Angeles Lakers and Portland Trail Blazers. The NBA players agreed later on Thursday to resume the playoffs on Saturday.

Then, in solidarity, a number of NFL teams decided to either not practice on Thursday or postpone their practices in order to discuss social change. These included the Arizona Cardinals, Washington Football Team, Green Bay Packers, Indianapolis Colts, New York Jets, Tennessee Titans, Denver Broncos, Jacksonville Jaguars and Chicago Bears. Many teams that cancelled their practices also used that time to talk about how to fight for meaningful social change — at which point the Bucks-Magic boycott evolved into a full-blown strike.

Meanwhile, Women's National Basketball Association (WNBA) teams decided not have any games on Thursday and three Major League Baseball games were postponed, including one with the Milwaukee Brewers who have expressed solidarity with the Bucks.

Sports journalists, political scientists, labor leaders and economists all agreed that the strikes were unprecedented and historic.

"In America sports has always been either at the center or the beginning of protest and civil movement," Robert "Scoop" Jackson, a sports journalist and ESPN contributor who wrote the book "The Game is Not a Game: The Power, Protest and Politics of American Sports," told Salon by email. "It may look different from one generation to the next, but at the core it's the same. Just as the circumstances and incidents that cause athletes and sports leagues to takes stances haven't changed, neither have the role sports has played in demanding change."

David Niven, a political science professor at the University of Cincinnati who teaches about the intersection of sports and politics, emphasized that the Milwaukee Bucks have set an important precedent.

"Political athletes have taken a knee, raised a fist, draped themselves in words and symbols, but those things happen in brief moments before the game," Niven wrote to Salon. "The Milwaukee Bucks didn't trade away a moment of quiet reflection to advance a cause, they traded away the game itself. The Bucks' decision is a great example of how important the first spark is in a resistance movement. Without the Bucks, the NBA rolls on. Without the NBA's example, no baseball team would have sat out."

Dave Zirin, a sportswriter who writes about politics and sports (such as in his book "A People's History of Sports in the United States"), shared Niven's assessment.

"While there were incidents in the 1960s when teams — led by Black athletes — refused to play games in protest of racist treatment, what we are seeing right now is without historical precedent, in terms of its breadth, its reach, and its power," Zirin wrote to Salon. "We are in uncharted territory."

Indeed, there have been a number of iconic moments in sports when athletes stood for political change, from track and field runners Tommie Smith and John Carlos giving a Black Power salute at the 1968 Olympics to boxer Muhammad Ali forfeiting his boxing titles by refusing to be inducted to fight the Vietnam War. Yet what is interesting about this current moment, Zirin mentioned, is that it is not one or two athletes, but multiple, entire teams standing up in solidarity.

Besides being a big moment in sports history, the actions of NBA teams and other professional athletes are also a stand-out moment in the history of American labor.

"There is enormous precedent with workers in a position to disrupt profits withholding their labor and thus forcing the hand of the owners," Maria Svart, National Director of the Democratic Socialists of America, wrote to Salon. "From Tommie Smith and John Carlos to Colin Kaepernick, athletes have made symbolic protest, but collective action like a strike has a direct material impact on profits. Workers in such a high profile position as this can do so, but also influence popular culture and prompt much broader swaths of workers to see the power we hold if we exercise it."

She added, "We do the work to make the economy run, and we can shut it down. These players striking for black lives are part of a long tradition of people who work for a boss saying enough is enough. The question is whether we realize that not only can we shut it down for one night or season — we could run society ourselves, without the owning class insisting on doing it for us."

Dr. Richard D. Wolff, professor emeritus of economics at the University of Massachusetts Amherst, told Salon that the players' actions can be understood as an expression of frustration with the inadequacy of existing institutions to address important social grievances.

Scoop Jackson told Salon that "it's still — to a degree — workers versus structures of power using their sweat equity as leverage to be heard/felt/taken seriously." The real question is whether they can make a difference — and Jackson, like Svart, pointed out that "that all depends on how far they are willing to take it, how determined and committed they are, how fed up they are and how willing ownership is willing to work with them and not in the future hold their actions against them when CBAs and contracts are on the table."

Jackson added, "Keep in mind that the athletes, specifically the NBA players during this moment, are reaching out to government officials directly and trying to find out both locally and nationally how they can implement change. They are rushing into this and being led strictly by emotions. They're thinking this through as much as possible and trying to strategize as much as they can. They are trying to dive deeper than the surface."

Zirin told Salon that, because the scope of the players' protest is without precedent, it will be difficult to accurately predict the long-term effects.

"There is no historical precedent so it is impossible to say if the athletes are going to make a tangible difference in terms of policy," Zirin explained. "But they have already accomplished two important things: 1) they have raised awareness and recentered the discussion around Jacob Blake, where it should be. Not on 'anarchists' or whatever right wing talking points are being spewed about the demonstrations. 2) They are providing hope for people during a time when hope is in short supply."

Niven explained to Salon that, as with Kaepernick, many professional athletes take considerable professional risks when they advocate for social change.

"Mahmoud Abdul-Rauf [a former player for the Denver Nuggets, Sacramento Kings and Vancouver Grizzlies] conducted a one-man anthem protest in the NBA in 1996," Niven recalled. "He was suspended by the league, and that was largely the end of it. Today, entire teams can literally refuse to play moments before a game and the league does not even consider suspending anyone."

Niven characterized this as a "players' revolution," meaning that players realize that they can make a difference "if they stand united" in solidarity. Niven said that those who stand alone, particularly in franchises like the NFL, haven't fared well. "Most players in the NFL play without a guaranteed contract, they can be terminated without pay in an instant," Niven said. "I did a study of what happened to NFL players who participated in anthem protests, and on average they lost millions on their next contracts."

He added, "On the other hand, there are leagues like the WNBA were the players are not economically safe but remain remarkably politically active. So it is not all about the bottom line."

The current strikes are also distinguished by the fact that they are wildcat strikes — that is, strikes that unionized workers undertake without the official authorization of their labor leadership.

"No strike is successful without a broad majority among the workers to do it, whether wildcat or not," Svart told Salon. "It's clear here that the players felt that what they had negotiated so far was insufficient so they collectively pushed farther. Wildcats can have a huge impact, such as in 1964 [when players for the first NBA All-Star Game threatened a strike in order to get their union recognized], because it's a demonstration of tremendous unity and resolve."

What happens next could change everything. Jackson said of the wildcat strike, "trust me on this: If another unarmed black man/woman is killed or shot by someone sworn to 'protect and serve' and NOTHING immediately happens in its aftermath before the finals or leading into the season opening, this will no longer be 'wildcat.' It will be 'Part 2' and permanent."

Likewise, Wolff told Salon that this current wildcat strike "is a prod to those two establishments — the labor movement on the one hand and the political parties on the other, they had better read the tea leaves here and understand that if they don't once again become a means or an agency for the working class to express its concerns and grievances, then they will be left behind as new and different political forms emerge — new parties, new movements, new labor unions."

He added, "Who knows what kinds of emergence is going to come?"