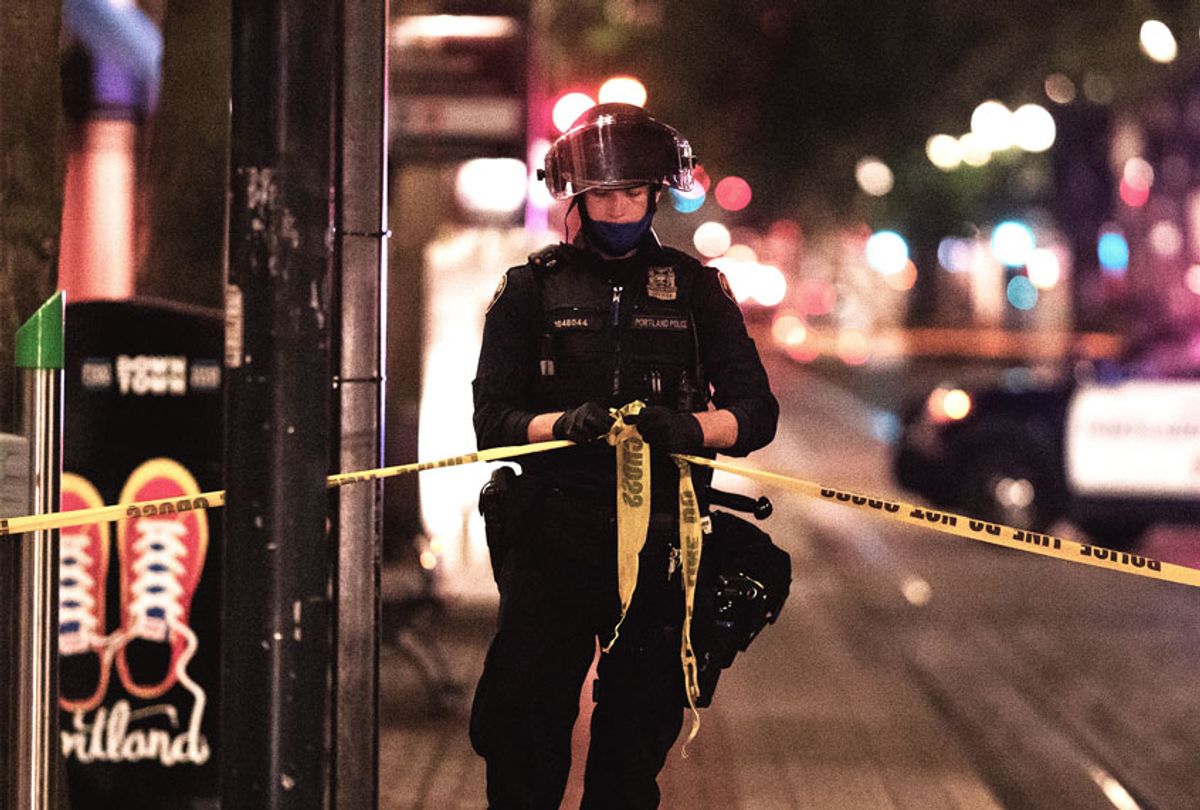 A Portland police officer ties a police line around the scene of a fatal shooting near a pro-Trump rally on August 29, 2020 in Portland, Oregon. Far left counter-protesters and pro-Trump supporters clashed Saturday afternoon as a parade of cars carrying right wing supporters made their way from nearby Clackamas to Portland. (Nathan Howard/Getty Images)
--

Democrats blamed President Donald Trump after a man identified as a supporter of the right-wing group Patriot Prayer was killed amid the unrest in Portland on Saturday.

The shooting in Portland escalated political tensions days after a 17-year-old who attended a Trump rally earlier this year killed two people and wounded one other in Kenosha, Wisconsin.

Joey Gibson, the leader of Patriot Prayer — described by the SPLC as a far-right group "frequently engaging in violence against their political opponents" in Portland and other cities — identified the victim of Saturday's shooting as Aaron "Jay" Danielson, who apparently went by Jay Bishop, according to the Associated Press. The outlet described Danielson as a "supporter" of the group and Gibson told the outlet he was a "good friend." Danielson was wearing a Patriot Prayer hat when he was shot, according to The New York Times.

The shooting came after a caravan of Trump supporters in about 600 vehicles drove through Portland, reportedly firing pepper spray and paintballs at counterprotesters. It was not immediately clear if the shooting was related to the caravan.

Michael Forest Reinoehl, a 48-year-old self-proclaimed anti-fascist and supporter of the Black Lives Matter movement, is under investigation in the fatal shooting, according to The Oregonian. The outlet reported that he was accused of bringing a loaded gun to an earlier protest in July.

Portland, which has seen more than 100 consecutive days of protest since the police killing of George Floyd in Minneapolis, has become a focal point in the presidential race. Trump came under heavy criticism after he deployed federal forces to protect a federal courthouse in the city, prompting Democratic leaders to blame his administration for exacerbating the situation. Saturday's shooting was followed by another round of finger-pointing.

"It's you who have created the hate and the division. It's you who have not found a way to say the names of Black people killed by police officers even as people in law enforcement have. And it's you who claimed that White supremacists are good people," he said on Sunday. "Your campaign of fear is as anti-democratic as anything you've done to create hate and vitriol in our beautiful country."

"He tried mixing with the Agitators and Anarchists and they mocked him. He would like to blame me and the Federal Government for going in, but he hasn't seen anything yet," Trump warned. "We have only been there with a small group to defend our U.S. Courthouse, because he couldn't do it."

Democratic presidential nominee Joe Biden, who has been repeatedly attacked by the Trump campaign for not condemning violence and looting even though he has repeatedly done so, also accused Trump of "recklessly encouraging violence."

"I condemn violence of every kind by anyone, whether on the left or the right," Biden said in a statement. "And I challenge Donald Trump to do the same."

Oregon Gov. Kate Brown, a fellow Democrat, announced plans to send state troopers to Portland to assist the police, blaming the violence on right-wing groups she said were "looking for a fight."

Though Saturday's shooting appeared to target a Patriot Prayer supporter, the Times noted that right-wing demonstrators have fired and brandished guns at recent protests in the city.

"Every Oregonian has the right to freely express their views without fear of deadly violence," she said. "I will not allow Patriot Prayer and armed white supremacists to bring more bloodshed to our streets."

Trump has repeatedly called on Brown to call in the National Guard, though she currently has no plans to do so.

Portland Police Chief Chuck Lovell told reporters on Sunday that it may get to the point where the city needs support from the National Guard.

Acting Homeland Security Chad Wolf told ABC News on Sunday that "all options" are on the table in terms of a federal response to the violence in Portland.

Wheeler, in a letter to Trump on Friday before the shooting, asked Trump to stay away from the city.

"Your offer to repeat that disaster is a cynical attempt to stoke fear and distract us from the real work of our city," he wrote.

Trump is also planning to visit Kenosha on Tuesday, where one of his supporters killed two people following the police shooting of Jacob Blake. Blake was shot seven times in the back in front of his young children last week.

Wisconsin Gov. Tony Evers, a Democrat, pleaded for Trump to stay away.