What does a "mini-stroke" look like? Medical experts weigh in on Trump's mysterious hospital visit

What even is a mini-stroke, and is it the kind of thing that you could cover up? Here's what this all means 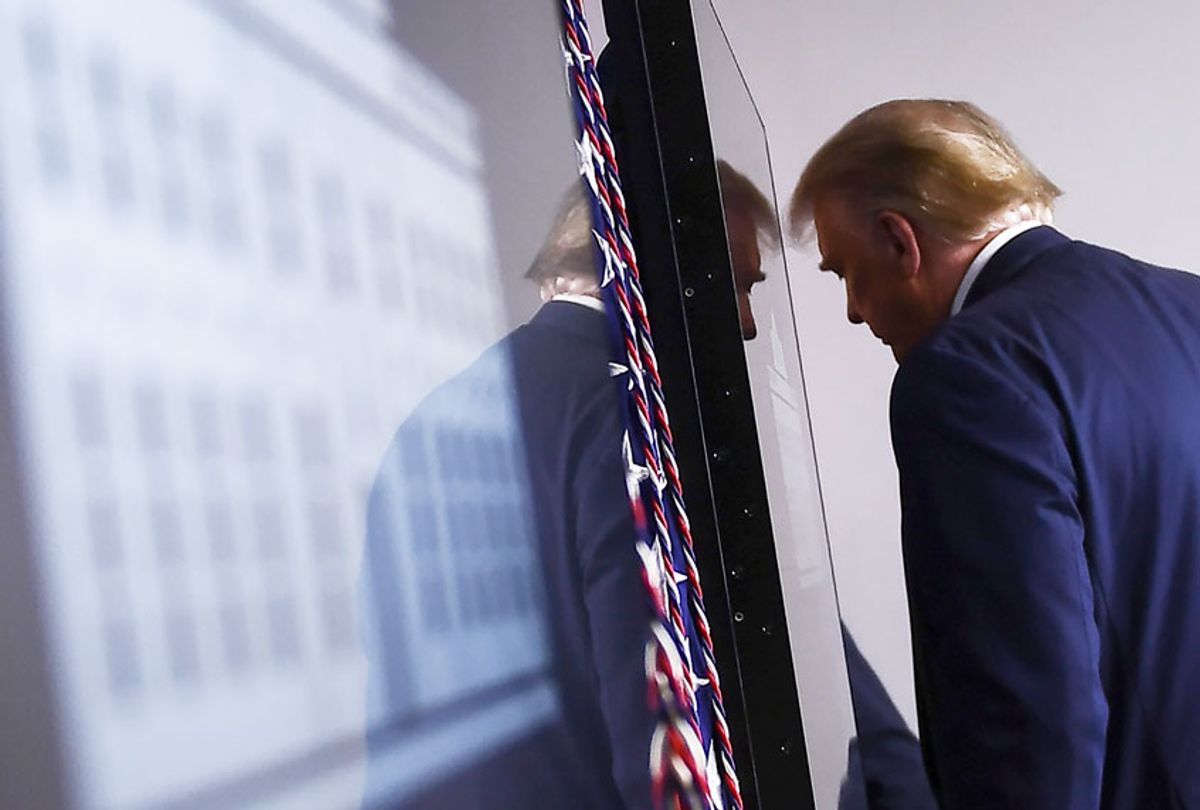 US President Donald Trump leaves after speaking to the press in the Brady Briefing Room of the White House in Washington, DC, on August 3, 2020. (BRENDAN SMIALOWSKI/AFP via Getty Images)
--

On Tuesday, Trump posted on Twitter that "they are trying to say that your favorite President, me, went to Walter Reed Medical Center, having suffered a series of mini-strokes." He denounced this supposed report as "FAKE NEWS" and insinuated that his opponent in the upcoming election, Democratic nominee Joe Biden, might actually be the one with the neurological health issues.

This tweet raised eyebrows because, before it was posted, the idea that Trump had had a "mini-stroke" was not reported by anyone in the mainstream media. A White House aide later explained that Trump had been responding to a Monday tweet by Joe Lockhart, who had served as press secretary to President Bill Clinton. This only raised more questions, however, since Lockhart had merely asked, "Did [Donald] Trump have a stroke which he is hiding from the American public?" Lockhart never said anything about "a series of mini-strokes"; nor did Michael S. Schmidt, a New York Times reporter whose upcoming book mentions that Trump made a surprise visit in November to Walter Reed Medical Center in Bethesda, Maryland.

Schmidt's book did claim, however, that Vice President Mike Pence was on "standby" to temporarily assume the office of the presidency in case Trump needed a procedure that requires anesthetic. The White House claims that the president was only having a routine checkup, which would not account for the reported requirement that Pence be on standby in the event that he Trump needed to be anesthetized — as check-ups generally do not require anesthetic.

(By contrast: When President George W. Bush had a colonoscopy in 2002, Vice President Dick Cheney temporarily assumed office because Bush was administered anesthetic. The Bush administration was open about this.)

While there is no smoking gun that would indicate the Trump administration is covering up that he had a stroke, such an event would certainly be on par for an administration with a tenuous grasp on truth. In any case, the lack of direct evidence hasn't stopped a raft of public speculation. Salon spoke to medical experts about what a "mini-stroke" really is, what it does, and whether such speculation was baseless or not.

"We do not use the term 'mini-stroke' for a variety of reasons," Dr. Larry Goldstein, chairman of the neurology department at the University of Kentucky and co-director of the Kentucky Neuroscience Institute and UK Neuroscience Research Priority Area, told Salon by email. "The medical term is TIA — transient ischemic attack. These are episodes in which the blood supply to a portion of the brain is briefly interrupted causing the same symptoms as a stroke that resolve, generally within minutes and with no evidence of relevant permanent injury on brain imaging such as an MRI or CT scan."

He added, "If there is evidence of damage on imaging, the same event is classified as a stroke."

Dr. David Paydarfar, chair of the Department of Neurology at the Dell Medical School at The University of Texas at Austin, told Salon in writing that mini-strokes are frequently associated with "poorly controlled risk factors like hypertension, diabetes [et cetera], and in such cases often occurs in clusters." He pointed out that the physical symptoms of a mini-stroke include "slurred speech, imbalance, weakness or clumsiness of one or more limb(s), loss of cognitive function" and the cognitive symptoms include "problems with comprehension and/or expression of speech, loss of recall, loss of other intellectual function like calculation, visuo-spatial orientation."

If Trump did suffer such a transient ischemic attack, it would probably not be difficult for him to conceal that from the public: As Dr. Russell Medford, a former associate professor of medicine, director of molecular cardiology and adjunct clinical professor of medicine at the Emory University School of Medicine, told Salon by email, "By definition, TIAs are transient with full resolution of any presenting symptoms." At the same time, he explained that mini-strokes are "a serious and concerning medical diagnosis that places the patient at increased risk for a future ischemic stroke."

Previous presidents have been disabled or severely affected by strokes, and even hid them from the public. When Woodrow Wilson had a stroke in 1919, he was unable to effectively serve for the remaining year-and-a-half of his second term. Less than three decades later, Franklin Roosevelt had a stroke right at the beginning of his fourth term — and died.

These presidential strokes occurred at crucial junctures in American history. When Wilson had his stroke, America had just ended World War I, was grappling with an influenza epidemic and was wrestling with constitutional amendments to prohibit alcohol and grant women the right to vote. When Roosevelt had his stroke, America was wrapping up World War II and transitioning from the Great Depression and war-era economies to what the nation hoped would be a prosperous future.

Although Trump has previously claimed that Joe Biden, a former vice president, is not mentally fit to be president, it is unclear if his recent tweet was referencing Biden's own history of neurological ailments. During his first presidential campaign in 1988, Biden suffered two aneurysms.