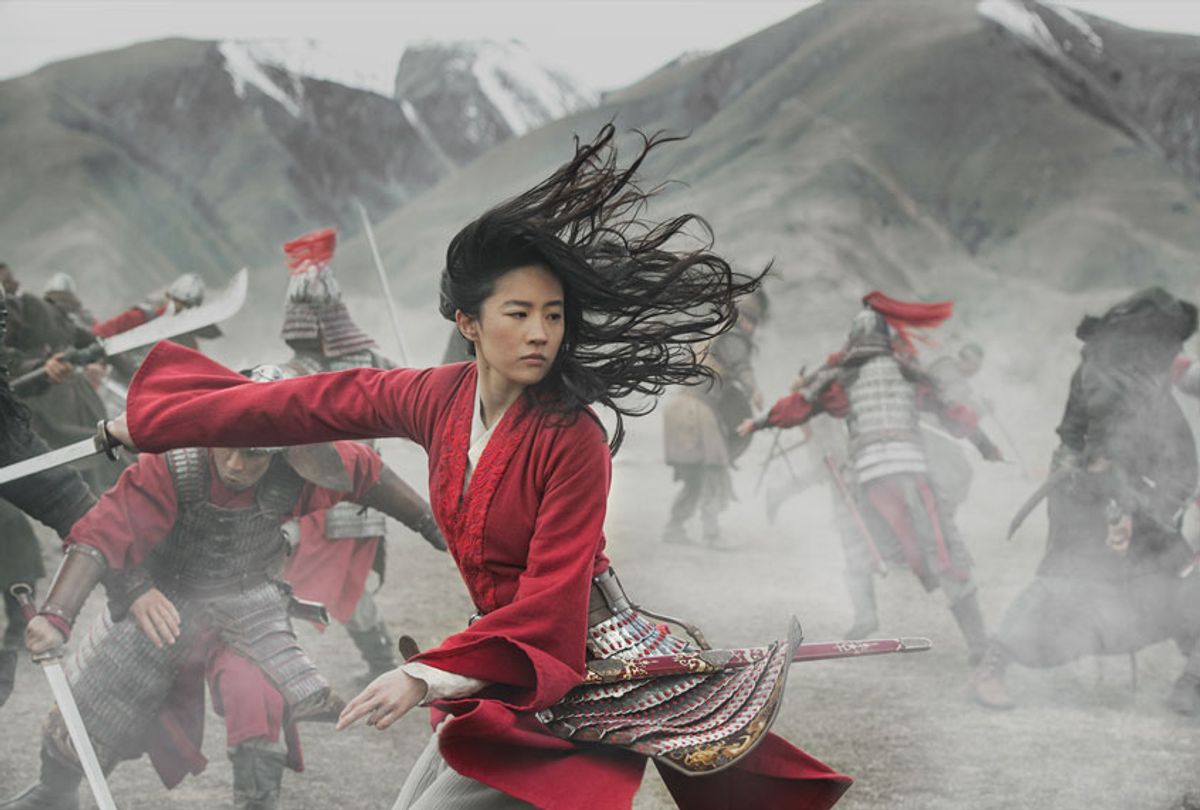 "Mulan," directed by "Whale Rider" filmmaker Niki Caro, is Disney's newest live-action interpretation of an animated classic, and the first to come out during quarantine.

Initially slated for release in March, the live-action "Mulan" made early waves by eschewing its source material in favor of a rendition without musical numbers, dragon sidekick Mushu, or fan favorite (and bisexual icon) officer Li Shang. The new film was billed as more somber in tone, more action-packed, with new characters. (Most of Disney's remakes have been adapted closer to the originals.)

Compare this to the 1998 animated original, which is a brightly colored, action musical buddy comedy that received criticism due to its Westernization of a Chinese story. This is, of course, a problem of Hollywood writ large — Disney, especially in the '90s, was a prime offender. At the same time, the animated original became a cult classic among a generation of growing millennials, particularly young Asian American women who appreciated Disney's singular Chinese "princess" in a sea of mostly white offerings. I count myself in that latter group.

Because the source material is so Westernized in nature, it's a little hard to judge the remake through any coherent cultural metric. It's being released to international audiences, as well, whose experiences will be totally different from that of being Chinese American, specifically —the lens that the original film probably most closely captured. That said, it's worth noting that the crew on the live-action film is perplexingly white—this includes the director, screenwriters, costume designer, cinematographer, and many, many others.

Whether or not you enjoy the live-action film will probably have to do with how wedded you are to the original — and even then, the live-action edition has some major road bumps. Mulan (the politically divisive Yifei Liu) is a fairly different character from the animated version, a woman who is already an adept warrior but is forced to hide it for the sake of societal expectations. (In the opening minutes of the film young Mulan displays her agility, setting her up for success as a fighter.) This is a complete 180 from the ethos of the animated film, where Mulan's entire thing is that she is not a warrior, and chooses to fight anyway for the sake of her father and her family.

Making Mulan a natural-born fighter isn't an unreasonable change, in an era with few notable female action stars — it's also truer to the original folk song "Ballad of Mulan," where Mulan was a skilled fighter before enlisting. It might have been an excellent reinterpretation, were it not so heavy-handed and, well, Disney-fied. But what remains bears minimal discernible relationship to the original, while reading too much like a basic Marvel film with a Chinese-looking facade to stand on its own.

The primary offense is the film's use of "ch'i" (or "qi") as a narrative crutch. In the 2020 "Mulan," having a preponderance of "ch'i" means being full of an amorphous source of power and life— it's something women in this cinematic universe shouldn't display, but Mulan has quite a bit of. It's also a device Disney knows well, as there is minimal difference between the film's usage of "ch'i" and Star Wars' usage of "The Force."

This live-action "Mulan" loses a considerable amount of suspense when Mulan's ability to rise through the ranks becomes a function of "not hiding her ch'i" and hoping others won't chastise her for it. It feels a little too Sheryl Sandberg "Lean In," wherein Mulan's journey is about breaking through the "ch'i ceiling" around her male peers, by doing impossible feats.

Though the film has culled its musical numbers, most iconic plot beats remain, augmented to have narrative payoffs gesturing to Mulan's growing "ch'i" rather than her wit or ingenuity. (And certain songs get their counterpart as short scenes or lines that can be read as fan service or cringey, depending on your perspective.) To the film's credit, Chen Honghui (Yoson An)—who is meant to play a version of Li Shang who is a fellow soldier rather than an officer—is a refreshing, charismatic addition, and can still be read as a queer character.

The fight choreography is enjoyable to watch, but is held back under similar constraints —Mulan gets to dazzle periodically, "showing her ch'i" and deploying a javelin through air kick, in a mic drop moment that would feel welcome in a superhero film. The use of environment feels a little closer to the balancing acts in "Pirates of the Caribbean" than the soaring, maximalist, dance-like combat of wuxia films. It's a bit disjointed for the film to take itself so seriously while meeting us halfway with the fantastical elements of the genre it aspires to emulate — to have Mulan scale the wall of one passageway rather than full buildings.

As a result, it's really hard not to miss the original's sense of humor, from the songs to the non-human supporting cast. In addition to losing Mushu, there's no unlucky cricket (although a fellow soldier is named Cricket), sassy horse, chaotic puppy, or squabbling ancestors. Instead, Mulan is watched over by a flowy looking CGI phoenix spirit, who flies overhead before she does something impressive. It's reminiscent of "The Lion King's" Timon and Pumbaa, playful characters who were pared down, lest their musical sequences look uncanny on real-looking animals.

This all points to the bigger question of Disney's commitment to turning its animated classics into live action. Disney's recent releases have been remakes of their most beloved properties, ones they can feel confident people will pay money to see in theaters. But there are some stories that exist better as animation — just as there are certain animated stories whose understanding of race and culture are stuck in the past. This might be a $29.99 not worth spending.

"Mulan" is available to Disney+ subscribers for a premier cost of $29.99 beginning Sept. 4 until Nov. 2. It will be released for free to all subscribers on Dec. 4.