Help, I'm addicted to my Sodastream 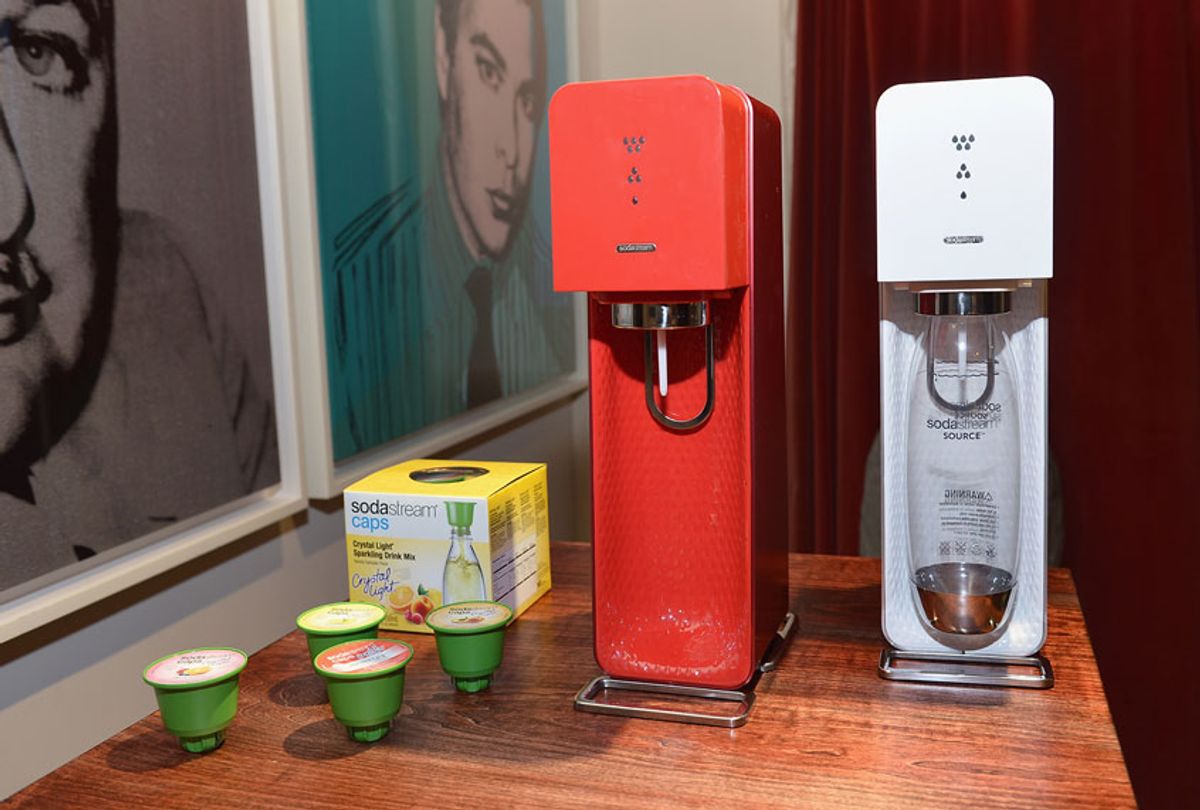 First, I would like to thank the clerk at Staples for being unduly generous to a crazy woman during what is a hard time for everyone.

A couple months ago, because I'm secretly a Earth Day-loving hippie underneath my middle-aged punk exterior, I loaded up my bicycle with a couple of spent CO2 canisters for my Sodastream to take to the office supply chain, which has a service where one can exchange them for full canisters at a discounted price. But when I got there, the kind soul working the counter gently informed me that they were out of the canisters available for exchange, and had no idea when there would be more.

I have to imagine the flash of frustration that passed through my eyes — the only visible part of my face, due to the mask — was alarming, because he continued to reassure me that he understood and that, because of the pandemic, the exchange program had mysteriously halted. Abashed at his compassion in the face of my naked need for fizzy drinks in a time of great suffering and pain, I slunk out of the store and returned home.

Internet research quickly proved how right the Staples clerk was. Due to the pandemic, not only was Sodastream not making canisters available for trade-in, they were also running short on various flavors, like their Diet Dr. Pepper knock-off and their pink grapefruit soda, that we apparently consume in vast quantities in my house. Soon, we were out of not just CO2 but all our flavors, and facing a prospect that we hadn't considered in the many years since we first bought our in-kitchen soda maker: Buying canned sodas from the grocery store.

Initially, it seemed like an adventure in a time when the bar has gotten incredibly low for what constitutes "fun." My partner and I rented a Zipcar for an hour, loaded up a cart with what seemed like an impossibly huge number of 12 packs of both caffeinated sodas for daytime drinking and caffeine-free flavors to be drunk at night, with or without alcohol, and figured that would cover us for the long period of time needed to figure out how to make our now sad and useless Sodastream start flowing again.

It turns out that the Sodastream, which works by converting liters of water stored in the fridge into delicious, fizzy sodas of whatever flavor you choose, was effectively hiding from us the true and epic nature of our soda pop consumption. But now we were faced with the cold, hard evidence of how much soda we actually do drink, in the form of an overflowing recycling bin and the dawning realization that we were going to have to rent a Zipcar again. Staring at the pile of sad and folded cans, it occured to me that the only thing I probably have in common with Donald Trump, besides us both being carbon-based life forms, was an unabiding addiction to diet sodas.

This is the point in the tale where, because we live in a puritanical culture where constant self-improvement is the baseline expectation, I am supposed to declare that I saw the light and finally, after all these years, learned to cut back drastically on my soda consumption for the good of my own health and the planet.

But, dear readers, I have too much respect for you to play that game. I don't regret how much soda I drink, and see no point in pretending otherwise. Diet sodas are as close to a guilt-free pleasure as you get in life, and frankly, the constant stream of overwrought articles about the theoretical dangers of artificial sweetners strike me as more the result of the American suspicion of pleasure than a genuine concern for our health born out of scientifically sound research.

On the contrary, like many people, what I've actually learned from this pandemic is to cherish those creature comforts of home, to really prioritize those little things that make being stuck at home all day every day a lot more bearable. It's why there's been a rush on skin care products, sweat pants, and bidets during this pandemic.

Still, it was unconscionable to keep throwing out all those cans, especially since the pandemic is interrupting recycling pick-up and so much of what is supposed to be recycled is probably going straight to the landfill. Nor was it really enhancing the stuck-at-home experience to have fewer soda options while still generating more trash I had to deal with. So finally I found an alternative service that allows customers to exchange CO2 canisters in the mail, which should work so long as Trump doesn't completely destroy the mail service.

Truly, one of the most glorious things about having a Sodastream is that, because the syrups take up so little space, you can have a grocery store's worth of flavors stashed in the closet. With that in mind, I will share with you, dear readers, a small sample of the various things having a kitchen counter fizzy drink maker has allowed us to consume.

Paloma: The classic grapefruit soda and tequila drink (with a squeeze of lime) that is like the hipster version of the margarita.

Gin and juice (ish): Basically, a paloma with gin instead of tequila. Serve with a side of '90s hip-hop.

Amanda made it through another day: Same thing, but with cheap vodka.

Gin and tonic: Or diet tonic water without the gin, if you're a weirdo whose English ancestry pokes through at times.

Diet Dr. Pete (the Sodastream version of Diet Dr. Pepper) with a splash of orange drops: Sounds weird, but a great non-alcoholic treat

Rum mules: Inspired by our executive editor, Erin Keane, these drinks are made with rum, ginger ale, lime, mint, and a splash of mole bitters

Wine spritzer: Sodastream can be used to make soda water, which in turn can be added to wine if you want a girly drink to go with all that skin care

Seltzer water: When you're pretending your house is a restaurant and they're bringing the fancy water out