"The CDC 'considerations' are entirely inappropriate, and must be rewritten from top to bottom" the group wrote 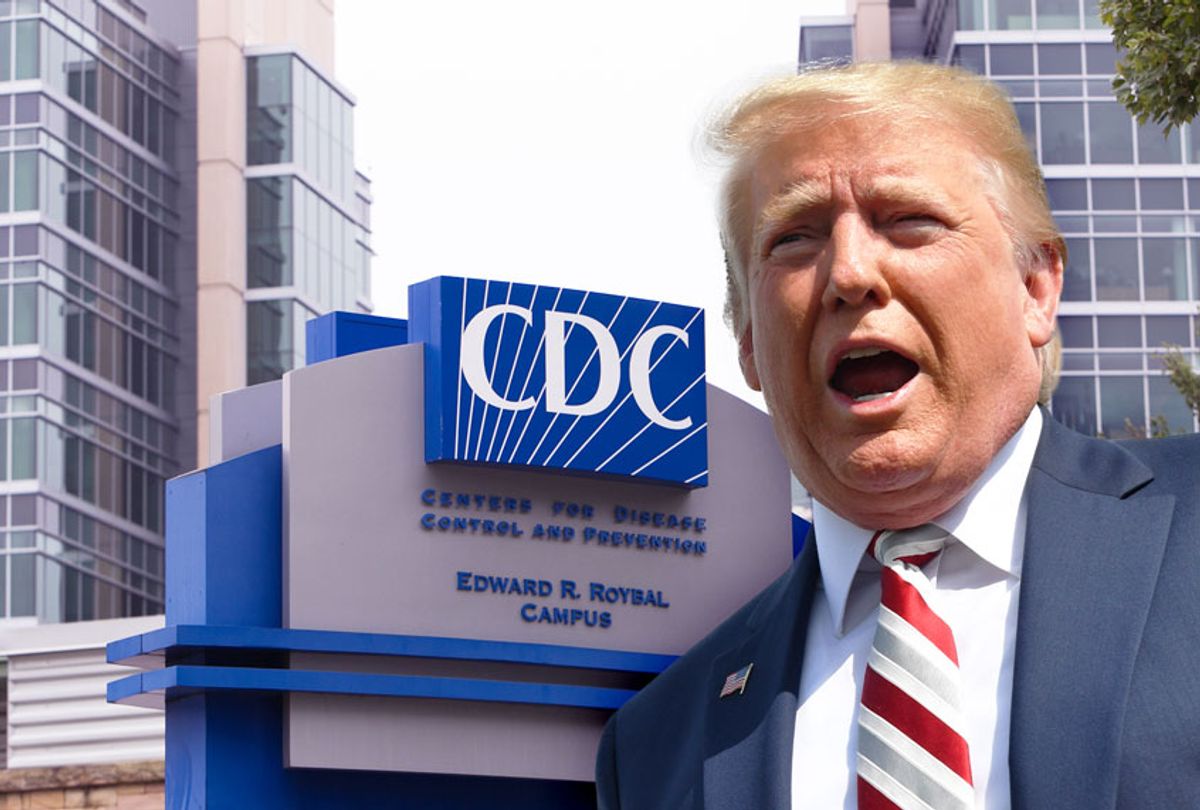 Quack medical opinions promoted by a right-wing organization appear to have influenced federal guidelines for reopening schools amid the coronavirus pandemic.

The month after the Centers for Disease Control and Prevention (CDC) published its initial guidelines for school reopenings, President Donald Trump received a letter bashing the recommendations from a group known as the Tea Party Patriots (TPP)

The group, which has raised a combined $24 million for conservatives since 2014, is behind a website called the "Second Opinion Project," where doctors espousing marginal medical opinions attack mainstream scientific consensus on the new coronavirus. The TPP was also the organizing force behind America's Frontline Doctors, a fringe collection of medical professionals who drew fierce backlash in July for a viral video promoting scientifically inaccurate information about the virus. One doctor in the video, later revealed to have preached that diseases are caused by dream sex with demons, falsely claimed that scientists were developing a vaccine to destroy a gene in the human brain associated with religion.

Recently, Democratic senators have demanded an investigation into whether administration officials pressured the CDC to soften its school reopening guidelines in service of the president's political interests. While many of the talking points in the TPP letter are shared by a number of other conservative think tanks, the letter was not only published on the group's website but also sent directly to President Donald Trump at the White House.

Trump admitted in private to journalist Bob Woodward that he had purposely downplayed the risks posed by the looming pandemic in order to avoid creating a public panic, even though he had long known the coronavirus was "deadly stuff." This included acknowledging the threat it posed to young people.

"Just today and yesterday, some startling facts came out. It's not just old — older," Trump told Woodward on March 19. "Young people, too — plenty of young people."

The president publicly said as recently as Aug. 5 that children were "almost immune."

"While Donald Trump was downplaying the pandemic and calling children 'COVID stoppers,' he acknowledged behind closed doors that children were just as vulnerable to the virus. Trump knew rushing schools to re-open was dangerous. Still, he did it anyway, because he thought gambling away their health could help him win re-election," Kyle Morse, a spokesperson from Democratic PAC American Bridge 21st Century, told Salon. "With lives hanging in the balance, Donald Trump is now doctoring reports and trying to cover up just how bad infection rates among school-aged children has become. Trump views students and teachers as political pawns, and we cannot trust him with one more day — let alone four more years."

The New York Times revealed Thursday that CDC scientists had not written a controversial guideline released last month saying it was not necessary to test individuals without symptoms of COVID-19 — even if they had been exposed to the virus. The guideline from the Department of Health and Human Services was reportedly "dropped" into the agency's website against protocol and the objections of CDC experts.

In mid-May, the CDC published its first road map for reopening the economy — including child-care, restaurants and mass transit — which warned that some institutions should remain closed. The CDC laid out a number of social distancing policies for schools: staggered arrival times; desks at least 6 feet apart, facing the same direction; eating lunch in classrooms; face coverings for all staff; and daily temperature checks for everyone.

Two weeks later, the TPP wrote to Trump demanding a "top to bottom" overhaul as it , criticized those safety recommendations:

We have reviewed these "considerations," and find them wholly out of touch with the way people live in the real world that is America in 2020. They are totally unworkable, and we urge senior officials to review and revise these new CDC "considerations" to bring them into line with how real people live. [...] The CDC "considerations" are entirely inappropriate, and must be rewritten from top to bottom.

The letter (available in full here) went on to make a number of recommendations which ultimately found their way into the CDC's school reopening guidelines published on July 23. As CNN noted, that guidance came down "hard in favor of opening schools." Some of the recommendations from the TPP included the following:

The TPP was not the only non-medical conservative group whose recommended changes found their way into CDC guidelines. As Trump attacked the CDC, conservative groups, including the Heritage Foundation and Cato Institute, published their own reopening recommendations. Members of the same groups were also appointed to Trump's Coronavirus Reopening Task Force.

Politico posited in a July 8 article that Trump's drive to reopen the country's schools was also about the economy and his re-election odds as "the issues are interlinked":

With children out of the house, they argue, parents can more easily return to work and juice the economy — something even the president's allies consider a necessity for Trump to win re-election. And with Trump's sagging poll numbers against presumptive 2020 rival Joe Biden, aides also hope the campaign for in-person schooling will play well with the female and suburban voters the president needs to remain in office.

In early July, the president vowed to personally intervene as he blasted the CDC's guidelines as "very tough & expensive."

"I disagree with @CDCgov on their very tough & expensive guidelines for opening schools. While they want them open, they are asking schools to do very impractical things. I will be meeting with them!!!" Trump tweeted on July 7.

Vice President Mike Pence joined the fight, saying at a press conference that day that Trump did not want the CDC guidance to create reopening "barriers."

The original recommendations emphasized caution: "The more people a student or staff member interacts with, and the longer that interaction, the higher the risk of COVID-19 spread." They also laid out a risk table for distancing scenarios, ranging from complete virtual learning to "full sized, in-person classes, activities and events" with students "not spaced apart."

The TPP letter claimed those "strange" recommendations were so extreme that they could only be implemented through "the use of force":

You're going to enforce social distancing on a playground or in gym class? Impossible. You're going to order children not to use the jungle gyms, the slides, the horizontal ladders, and the carousels, because they cannot be disinfected between each use? And we are expected to believe this will succeed without the use of force? Try telling a nine-year-old he can't climb on the horizontal ladders, or a five-year-old she can't use the slide. Good luck with that.

The TPP complained about the inefficiencies of sanitizing surfaces. It also wanted the CDC to emphasize that children were unlikely to get sick and spread the disease. In addition to reflecting those concerns, the revised CDC guidelines emphasized another of the group's qualms: the "social, emotional, and mental health needs of students" that could be impacted by "potential learning loss."

The letter also inaccurately cited a medical journal report to argue against requirements for face coverings included in the CDC recommendations:

This insistence on masks flies in the face of data, science, and common sense. A study that appeared in The New England Journal of Medicine on May 21st reports that masks provide 'little, if any, protection from infection.' Furthermore, the possibility of 'catching COVID-19 from a passing interaction in a public space is therefore minimal.' So, why the insistence on masks? The article provides this explanation: 'In many cases, the desire for widespread masking is a reflexive reaction to anxiety over the pandemic.'

The authors of that study wrote a clarifying letter to the NEJM pushing back against this misinterpretation, which had become widespread. It read, "In truth, the intent of our article was to push for more masking — not less."

"We did state in the article that 'wearing a mask outside health care facilities offers little, if any, protection from infection,' but as the rest of the paragraph makes clear, we intended this statement to apply to passing encounters in public spaces — not sustained interactions within closed environments," they said.

"We therefore strongly support the calls of public health agencies for all people to wear masks when circumstances compel them to be within 6 feet of others for sustained periods," the letter added.

Nevertheless, the revised CDC guidelines tempered the mask guidance, saying that while it was "critical" that schools include cloth face coverings as part of a larger strategy, "more research and evaluation is needed" to determine how effective it would be in schools.

The TPP also criticized the CDC's recommendation that classes configure seating charts so that all students face forward, minimizing face-to-face contact, calling the idea "straight out of a dystopian science fiction novel." For support, the letter cited an ophthalmologist, or eye doctor, who claimed that the agency's recommendations would create a "dystopian environment for our children." Again, the CDC eased its recommendations in this case.

The early guidance also suggested that small groups of students and staff stick together throughout the day as much as possible, including staggered arrival and drop-off times. Those guidelines were also softened after the TPP letter told the president that schools had been intended to "prepare our next generation to be productive members of society – a society that will not always allow for social distancing, staggered scheduling, herding into small groups and the like."

While influential conservative think tanks combatted the guidance with white papers, the TPP — which has raised tens of millions of dollars for conservative causes — took a more grassroots approach.

Four days after the CDC released its revised guidance, the TPP funded and hosted a press conference in front of the Supreme Court featuring a group called "America's Frontline Doctors." Those individuals made false claims about COVID-19 "cures," and alleged that public health measures such as mask mandates and school closings were ineffective and unnecessary.

One of the speakers, Stella Immanuel, claimed that she had cured 350 COVID-19 patients using a hydroxychloroquine treatment. Immanuel said doctors who refused to use the Trump-backed trherapy, which by that time had its emergency authorization revoked by the Food and Drug Administration, were like the "good Germans who allow the Nazis to kill the Jews."

Trump and his eldest son, Donald Jr., both shared the video, but social media platforms soon began to strip it from their platforms for violating rules about promoting misinformation related to the pandemic.

Trump, however, called those in the group "very respected doctors." He specifically singled out Immanuel — who did not receive her medical degree in the U.S. and espoused ridiculous theories, such as that diseases come from "demon sperm" — as having been particularly "spectacular."

"I thought she was very impressive in the sense that, from where she came — I don't know what country she comes from — but she said that she's had tremendous success with hundreds of different patients," the president said.

Immanuel's practice operates out of a strip mall in suburban Houston.