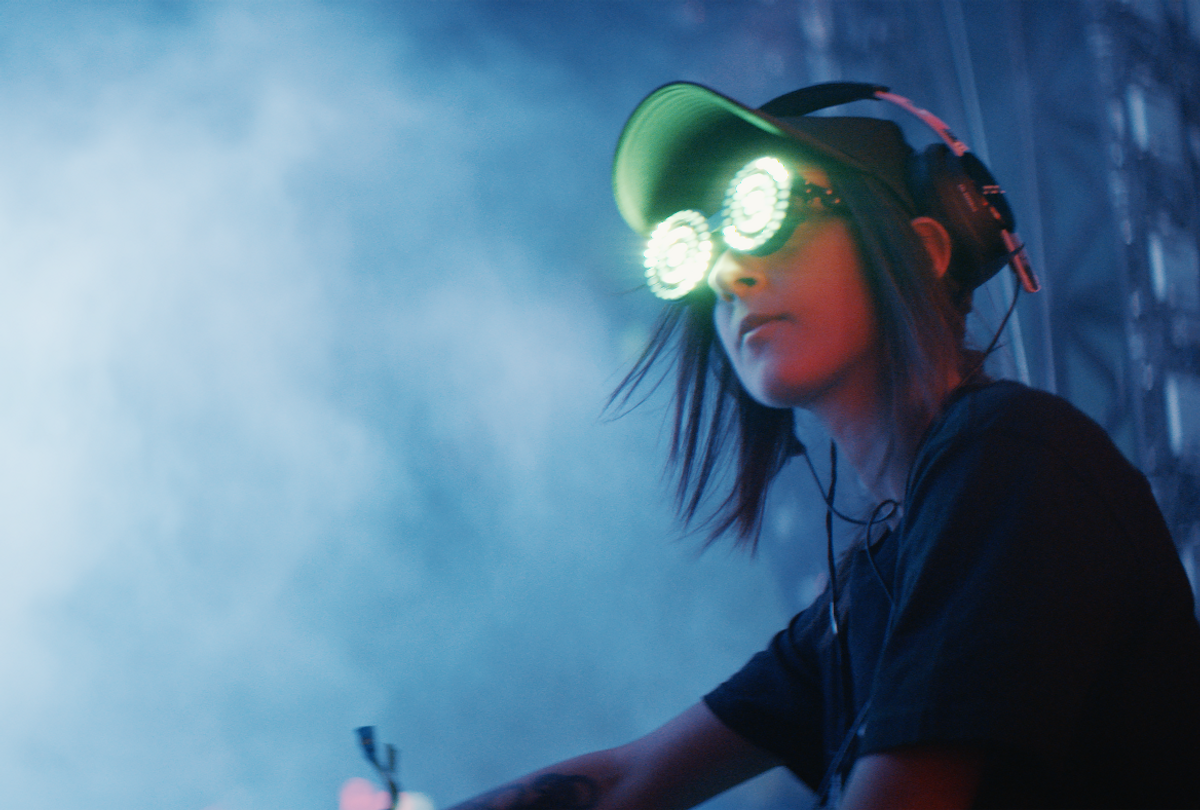 EDM music festivals and nightclubs may be on pause during the global pandemic, but in the top 150 clubs, the annual percentage of female DJs is a mere 6%. In 2019, Billboard and DJ magazines released their list of top 100 DJs, and only five—five!—were female. (The highest ranking was Alison Wonderland #36; REZZ followed at #39; Nervo came in at #82; and Tokimonsta was #98). According to a study done by the Annenberg Institute, women make up less than 3% of production and technical roles in the music industry, and women of color hold less than 0.3% of those jobs.

Stacy Lee's fabulous, energetic documentary, "Underplayed," which is having its World Premiere at the Toronto Film Festival Sept. 19, gives a voice to women DJs, providing reasons why a necessary corrective is needed as fast as 120 bpm.

Lee's film profiles a dozen women including REZZ, Tygapaw, Alison Wonderland, Tokimonsta, Nightwing, Sherelle, and Nervo, who have all felt unwelcome in the EDM music scene. They must deal with everything from trolls on Twitter who suggest they used sex to get their gig, to making 29% less money than their male counterparts. Moreover, the sexism, disrespect, and the lack of opportunities to perform diminish their self-confidence. When women DJs do get the rare chance to headline a festival, they have to work much harder than men to prove themselves.

These are not new messages. Women in STEM face similar issues, as do women in other industries from government to big business to Hollywood. Lee's film shows how women, who have been in the electronic music scene for decades, have been rendered invisible. She spoke with Salon about why this is the case, and how it can change.

What prompted you to chronicle women in the EDM scene? Was it that you discovered the staggering statistics and explored the scene, or that you knew the EDM world and learned about the gender disparity?

I hadn't been into the EDM scene until I made the film. I did a short film four years ago, "Discwoman" on the gender disparity issue in the EDM scene in the pre-#MeToo era. When I was asked to make this, I thought, "Surely it must be better!" But when I looked at it, I realized little had changed, so I thought there was a story here. Gender disparity is imbalanced in every industry and there are many inequalities. I did three months on the phone with DJs, producers, as well as A&R, bookers, etc. I realized there are commonalities across different women's experiences in the scene, but also issues that come up pertaining to individuals. From there I also felt that 2019 was an important time with strides being made with awareness of gender equity across many different industries, so I thought it was good to do a deep dive.

Can you talk about how you assembled the film and found the footage?

We shot over four months during the 2019 festival season, when every day and every weekend has a festival or performance. It was a wonderful time to do it — there was so much creative output. But the challenge was that Alison Wonderland was playing two shows in one night in different countries, so it was a huge logistical puzzle. There is talk on these issues, but it's often relegated to sound bites, and it is so much more complex than that. And it's not the women's responsibility to solve it. So, as we chose each subject, we wanted to spend time with them and get to know their craft. Each had a unique and hands-on creative process. Being able to see them perform, but also see the humanity of each subject. A lot of the talent selection was time and access. We did not want just a side stage sound bite, but to be in the room as things happened, like Alison Wonderland during a practice session. That was an important aspect — to visualize and experience this stuff.

Let's start with REZZ, who is one of the few successful female DJs. She is self-taught but also full of self-doubt. Can you discuss why she is so popular and yet so vulnerable?

The self-doubt came in over time. A large part of it has to do with the fact that there are so few women headlining, and there is no real strong community. They are often pitted against each other. There is no camaraderie; there's so much isolation sitting on your own in a room. She's young. There's a lot of pressure. They just want to be in the studio making music, but to be successful is being out on the road and having stage time. She was first in her basement by herself producing and then thrown in this weird world of being on stage. Because there are no examples preceding her, as Tokimonsta says in the film — If you're popular, this might your one chance at success. Which can mean touring until you're completely burned out.

Tygapaw, a queer Jamaican DJ, is a shining example of DIY, which raises the question of why women in general, and women of color in particular, must create her own opportunities and have full control if they want to participate?

That's 100% accurate, particularly as it pertains to someone like Tygapaw, where there wasn't a club night, so she created one, and there wasn't a label, so she created one. Female entrepreneurship is key. It's an additional hurdle that women have to come up against. We spent a lot of time with her, and the layers of complexity and depth and challenges to her story. The underground scene is her passion, and her passion helps her overcome extreme odds. She's running club nights and on magazine covers so she looks successful, but sustainability is much more challenging. When we interviewed her, she had $3 in her bank account. There is a lack of financial stability and [female DJs] need other jobs. It's incredible what they have to overcome to do what they love. She uses a lot of collage from her own life in her music. She played MOMA PS1 last year. She doesn't want to play Coachella. She has this artistic element. PS1 is making it in New York artistic scene. It was a huge marker in her career.

Tokimonsta was so moving and heartfelt talking about not receiving credit for her work and feeling the Grammy nomination she received was out of sympathy, not talent. What observations do you have about why women are not taken more seriously in the industry?

Tokimonsta doesn't want to be your third-favorite female producer, she wants to be your 20th-favorite producer. She battled the term "female" throughout her career. She came up in Los Angeles, around dudes, and was the only female producer and DJ. As she became more successful, she has become a role model and an example — women can do this. There was no one visible for her. That whole, "If you can't see it, you can't be it." She wrestled with the complexity of gender definition, knowing it must exist, and is exhausted from being categorized.

Nightwing has the most painful story in that she was harassed online after her Boiler Room gig, and that caused her to face depression and anxiety, and step away from music for a spell. All the women DJs have experienced some aspect of sexism and harassment, and most internalize it, but for Nightwing it was more acute. Can you talk about that facet of the business?

Trolling in general, and Tom from Boiler Room talked about it in the film, has become more extreme. In Nightwing's instance, the way it went down, she became the poster child for trolling. She had technical difficulties and it was shocking all the backlash and reactions that were posted. It escalated and become extreme and got more personal and out of control. She was defined by that, and that was hard for her. It made her more depressed. She just wants to make music and perform, but because she's a woman, it was amplified. She started to believe it because everyone thinks this about you. It's overwhelming. You can't sort reality from noise. She is the example of turning it around. A lot of women would be averse to go into the industry. Nightwing needed to teach women confidence and how to protect themselves, and she does these workshops. Creating spaces for women to be vulnerable is a huge turning point in how the industry can create a pipeline to come to the main stage or underground.

Sherelle makes the point that she downplays her femininity and plays up her androgyny, something several DJs in "Underplayed" echo. The point is that these women must deflect their sexuality. What are your thoughts on this?

The EDM industry didn't do any favors with posters of women in bikinis on a DJ deck; it was a prevailing, hypersexualized image. That creates this precedent. Tokimonsta's point is if I want to be taken seriously, you take the sexuality out of the equation. Sherelle puts her persona out there, and people mistake her for a boy, and she questions if that has made her path easier than it would for someone who wears a skirt. The fluidity of gender and sexuality is incredibly beautiful, and that may be a way of breaking through. Sherelle is an interesting case for that. Everyone we spoke to has a thought about their physical appearance and what they look like on stage. Alison wears oversized t-shirts as a persona to deflect attention from sexuality. Instagram is a huge part of your brand in this industry. But as one interviewee in the documentary notes, people book based on her Instagram posts, not her Soundcloud.

Nervo and their babies were adorable. These DJs are the rare example of women choosing to be mothers and work a grueling tour. But surely this is the exception, not the rule?

They said it in the film, if they didn't have each other, it would be a challenge to be mothers. Their job starts at 2 a.m., when you should be nursing your baby. Motherhood and EDM lifestyle do not go hand in hand. They love their lives and touring, and they are good at what they do, so it was interesting to see how they did that and toured together.

I love that Nervo makes the point that men are not dealing with this issue, and are therefore, unsympathetic to it. Men aren't told to "shut up and play music," or judged by their looks, or have assumptions made about them. Men don't face these additional pressures. What can you say about male privilege in the scene?

I didn't want this film to be women complaining about how hard they have got it. It won't change things and it's not the truth of how women feel. But it will take both sides of the population to change things, so how can I include male perspective and male allies to make this feel like something that can be change together? I don't want male voices to validate the females. It was hard to find those voices, because we are going through an extreme time calling people out and making them feel accountable, but Mark Ronson speaks to it in the film. He noticed [sexism] again and again.

It is going to take a century to close the gender pay gap. A big part of telling the story is the reckoning. It's like the Black Lives Matter movement. It is constant work and vigilance until it becomes organic.