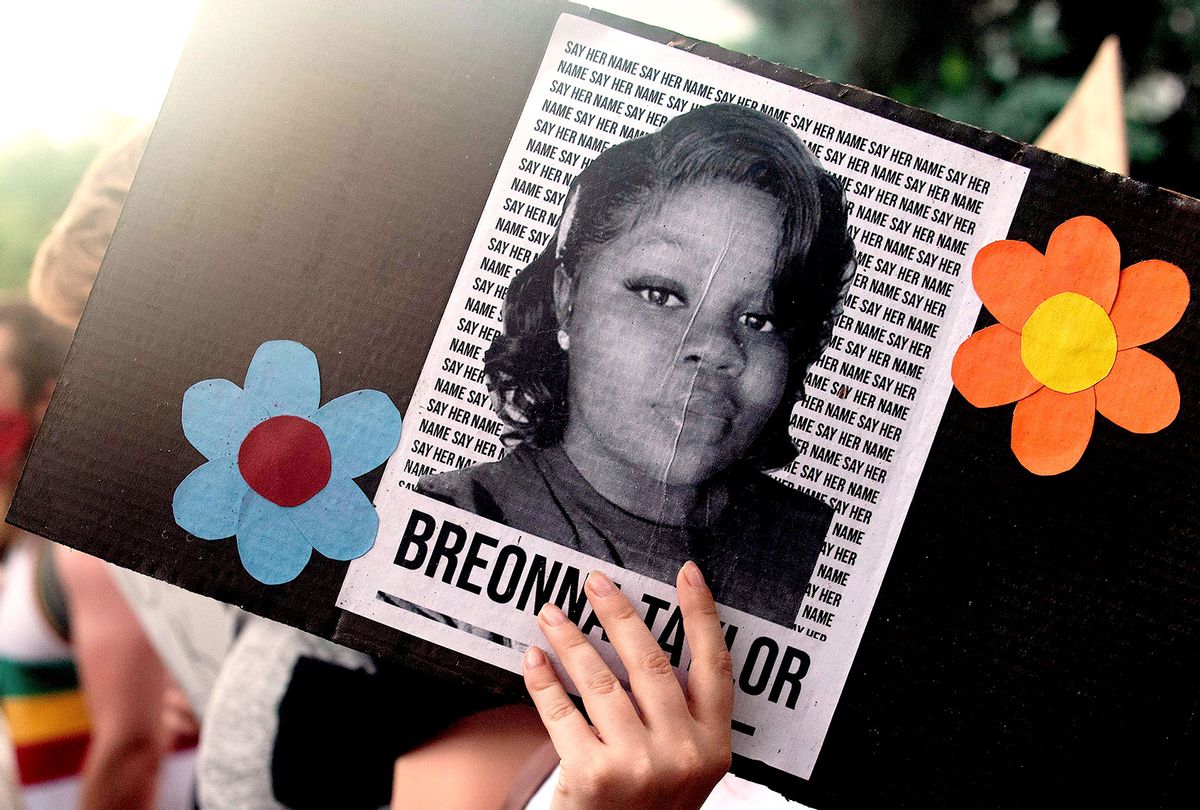 A demonstrator holds a sign with the image of Breonna Taylor, a black woman who was fatally shot by Louisville Metro Police Department officers, during a protest against the death George Floyd in Minneapolis, in Denver, Colorado on June 3, 2020. (JASON CONNOLLY/AFP via Getty Images)
--

Kentucky Attorney General Daniel Cameron announced on Wednesday that former Louisville Police Det. Brett Hankison was charged with three counts of wanton endangerment in the first degree for blindly shooting into Breonna Taylor's apartment, though not for her shooting death.

Hankison, the only officer terminated after the shooting, was indicted by a Jefferson County grand jury earlier in the day. His bond was set at $15,000. If convicted, he faces between one to five years in prison for each charge.

Hankison was charged over bullets that struck the apartment of Taylor's neighbors. The other two officers who fired their weapons, Sgt. Jonathan Mattingly and Det. Myles Cosgrove, were not indicted.

Cameron, a Republican, made the announcement after a grand jury investigating the case presented its report on the shooting to a judge.

"What I can provide today are the facts. … I urge everyone today to not lose sight of the fact that a life has been lost, a tragedy under any circumstances," he said, but declined to go into detail about his investigation due to state rules prohibiting prosecutors from commenting on ongoing cases.

Cameron said investigators had to "piece together" evidence because none of the officers wore body cameras.

He said that a single witness corroborated the officers' claims that they announced themselves before trying to enter Taylor's apartment, arguing that it was not a "no-knock" warrant. The officers encountered Taylor's boyfriend Kenneth Walker, who shot Mattingly in the leg, he said. Mattingly fired his gun six times, Cosgrove fired his gun shot his gun 16 times, and Hankison fired 10 times, with some of Hankison's bullets striking a nearby apartment, he said. Taylor was hit with only one "fatal" shot, he claimed, adding that she would have died from the wound within seconds. The FBI concluded the fatal shot was fired by Cosgrove, he added, though other reviews were inconclusive.

Mattingly and Cosgrove "were justified in their use of force," he said, but Hankison, who fired from outside a sliding door, put Taylor's neighbors in danger.

Homicide charges "are not applicable to the facts before us," he said, because Mattingly and Cosgrove returned fire "to protect themselves" when they were shot at by Walker.

"I know that not everyone will be satisfied with the charges announced today," he added, criticizing at length those acting on "emotion" and "outrage" in calling for more severe charges and castigating "celebrities" and "influencers" weighing in on the case.

Cameron said that any civil rights violations and questions about the search warrant would be investigated by the FBI.

Louisville Mayor Greg Fischer declared a state of emergency for the city on Tuesday "due to the potential for civil unrest" following the announcement. Restaurants and stores were boarded up and some federal buildings were shuttered for the week.

Taylor's boyfriend Kenneth Walker and neighbors said the officers did not announce themselves when they tried to enter the home. The officers claimed they did announce themselves but Taylor and Walker did not hear them. Walker said he believed someone was breaking in and fired his legally owned gun, hitting Mattingly in the leg.

Walker has said that Taylor was alive for at least five minutes after the shooting but the officers made no attempt to help her, which Cameron disputed. Dispatch logs obtained by the Louisville Courier-Journal show that Taylor received no medical attention for more than 20 minutes after she was shot.

No money or drugs were found in the apartment and her family has said she had no involvement with Glover's alleged drug business.

Walker was charged with attempted murder and assault before prosecutors dropped the charges.

The Courier Journal reported that police had targeted Glover and an associate, who they believed were selling drugs at a house 10 miles away from Taylor's home. A judge signed a warrant allowing police to search Taylor's home because one of the officers said that Glover had used her apartment to receive packages.

Taylor's family alleged in a lawsuit that Glover was targeted as part of a large-scale redevelopment project in his neighborhood and that Taylor was killed as part of a gentrification effort, which the city denied.

Hankison was fired in June after interim Police Chief Robert Schroeder accused him of "blindly" firing 10 rounds into Taylor's apartment, though the officer is appealing the decision.

Schroeder said that Hankison's conduct was a "shock to the conscience" and that he was "alarmed and stunned" that the officer violated department procedures in the shooting, noting that bullets also struck a wall, endangering Taylor's neighbors.

Mattingly and Cosgrove were placed on administrative leave.

A day after the grand jury in the case convened, Mattingly sent a mass email to fellow officers defending his actions and criticizing protesters as "thugs." Mattingly insisted that officers involved in the shooting "did the legal, moral, and ethical thing that night" while complaining that "the good guys are demonized, and criminals are canonized."

His attorney has said that he was "following orders of superior officers" and "followed established police procedures."

The firing was prompted by mass protests that intensified after the killing of George Floyd in Minneapolis.

Cameron, the first Black attorney general in the state and a rising Republican star who spoke at the party's convention last month, was appointed as a special prosecutor in the case in May. The FBI opened a separate investigation as well.

After settling with the city last week, Taylor's mother Tamika Palmer said that the only way to bring justice for her daughter's death was to prosecute the officers who shot her.

"As significant as today is, it's only the beginning of getting full justice for Breonna," she said. "We must not lose focus on what the real job is. And with that being said, it's time to move forward with the criminal charges, because she deserves that — and much more."