Unpacking Trump's beef with canned tuna, which he claims protesters are using as weapons

The day after the president's Pennsylvania rally, I called a dozen grocery stores to ask about their tuna sales 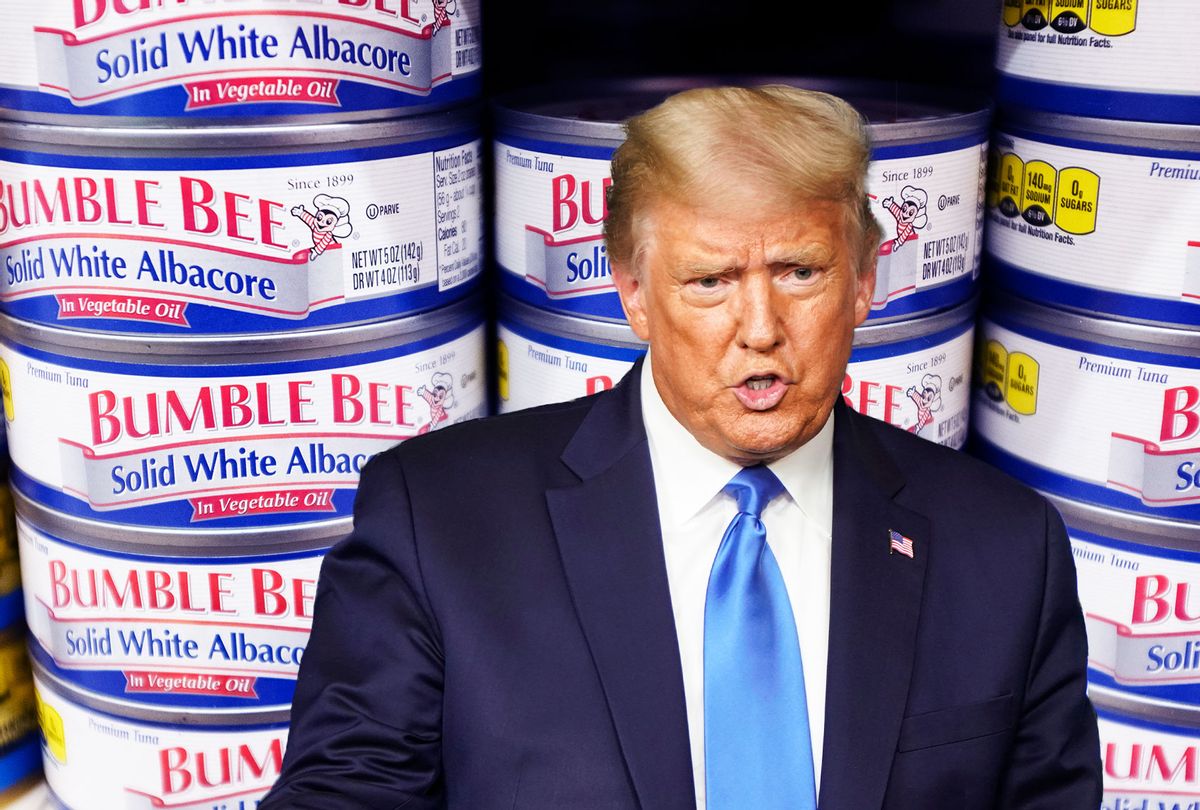 The day after President Donald Trump's campaign rally in Moon Township, Pa., I spent a portion of the afternoon calling a dozen grocery stores around the country and inquiring about their tuna sales. Most of those conversations revealed that those sales had spiked at the beginning of the pandemic — likely a consumer exercise in frugality and due to the product's shelf stability — but slowed to a trickle over the summer as production struggled to keep up with initial demand.

We talked about the tuna market, in general. Sales have dipped 42% over the past three decades after a peak in the late 1980s. We reminiscenced about the 2018 Wall Street Journal article in which StarKist's Vice President of Marketing and Innovation Andy Mecs blamed the struggles of the tuna market, in part, on millennials and their lack of can opener ownership.

Then came the final, absurd question, "Have you heard of any protesters in your community using tuna cans as weapons?"

A Minneapolis bodega owner probably gave the most reasonable response.

Starting in June, Trump began asserting that protesters across the United States — many of whom are calling for police reform and increased awareness of systemic racism following the killings of George Floyd, Ahmaud Arbery and Breonna Taylor — were throwing canned food items at police officers during demonstrations.

In a July 31 meeting with the National Association of Police Organizations Leadership, Trump said that protesters' weapon of choice was canned soup because it's "better than a brick because you can't throw a brick." During his Tuesday rally in Pennsylvania, he said they had scaled down to cans of tuna fish.

"They throw it," he said. "It's the perfect weight, tuna fish; they can really rip it, right? And that hits you. No, it's true. Bumble Bee brand tuna. And you can throw that, you can put a curve on it, you can do whatever the hell you want."

It should be noted that there have been no media reports of protesters attacking police officers with cans of tuna. It's just another lie from a president from whom untruths are completely unsurprising, and in the realm of topics about which he has been willfully dishonest, this is definitely one of the more inane.

But these comments — which became an overnight meme on Twitter — only serve to further show Trump as someone who actively peddles to conspiracy theorists, plays into heightened tensions across the nation and publicly lashes out against people (and, uh, canned tuna brands) who have previously criticized him.

The whole situation is reminiscent of what I've since termed the "Great Dairy Scare of 2020," when there were swirling rumors of police officers being targeted with poisoned Shake Shack milkshakes, hardened concrete made to look like "chocolate chip ice cream," and a blended coffee drink concealing a tampon.

Some of these stories' origins were more reasonable. In the case of the Shake Shack milkshakes, the drinks tasted "off" because of residual milkstone remover, an acidic solution used to combat buildup in dairy equipment. The machine had just been cleaned before the officers placed their orders.

The officers were sent to Bellevue Hospital to be examined, but never actually became sick.

However, as I reported in June, an email was sent out in the meantime to the city's police unions, stating six officers had "started throwing up after drinking beverages they got from shake shack on 200 Broadway," which was followed up with by a post by The Detectives Endowment Association saying that several officers had become ill after being "intentionally poisoned by one or more workers at the Shake Shack."

That's the version of the story that spread rapidly, and only served to widen the divide between protesters and officers, and their respective supporters. The "chocolate chip concrete" and tampon-in-Frappuccino rumors are other examples of senseless fearmongering, no different than the "buses full of antifa" hoaxes that spread panic through a number of small towns across the country — or the current tuna can discourse.

And Trump has no interest in assuaging unfounded fears or promoting unity. During his meeting in July with the National Association of Police Organizations Leadership, he called into question the motives and character of all protesters.

"When they get caught, they say, 'No, this is just soup for my family,' and then the media says, 'This is just soup. These people are very, very innocent. They're innocent people. These are just protesters. Isn't it wonderful to allow protesting?'"

He continued: "No, there's — and, by the way, the media knows it better than we do. They know what's going on. I don't know what's wrong with them. They're doing our country a tremendous disservice — I'll say that."

It's interesting, too, that in his comments about tuna can projectiles, Trump name-checked a specific brand: Bumble Bee Seafoods. The San Diego-based company was vocally opposed to Trump administration tariffs against imports of Chinese tuna, stating that the action would be "devastating" for the company.

As Neil Ramsden reported for Undercurrent News, a seafood industry trade publication in 2018, Bumble Bee CEO Jan Tharp wrote a letter to the U.S. Trade Representative about the potential implications of the tariffs.

Bumble Bee did not immediately respond to a request for comment on whether they felt Trump's comments regarding their products being used as projectiles by protesters were retaliatory, but it wouldn't be the first time the president has publicly disparaged a company for perceived slights against him.

For example, in August, he blasted Goodyear Tire and Rubber Company when it was revealed that company dress code banned MAGA hats. It's happened often enough that marketing consultant Rohit Bhargava wrote a guide for companies called "How to React if Trump Mentions Your Company on Twitter."

The canned seafood company did, however, issue a short quip of a response on Twitter.