"The Boys": With new superhero Stormfront, fascism dons a mask and cape of female empowerment

Despite the veneer of carefully crafted white feminism, Stormfront's bigotry is revealed when cameras are off 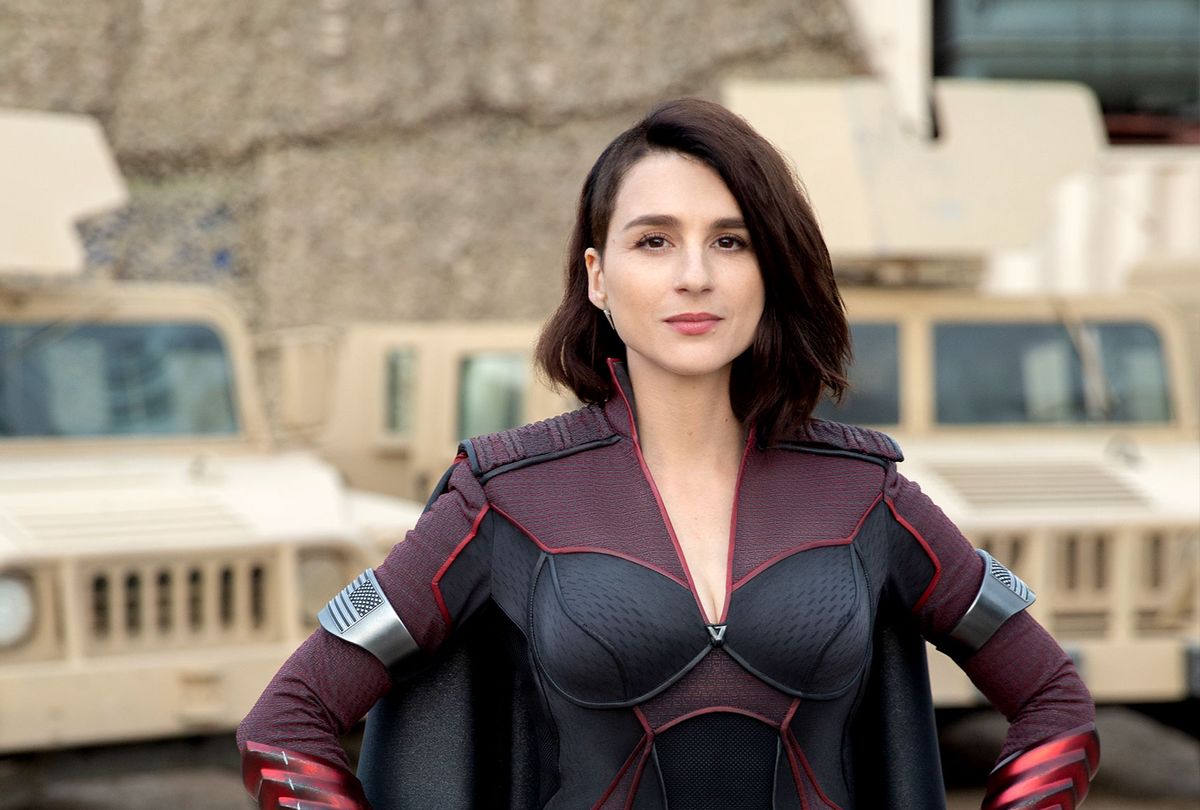 Aya Cash as Stromfront on "The Boys" (Amazon Studios)
--

Editor's note: This story discusses plot details about the second season of Amazon Prime's "The Boys." Stop reading now if you aren't caught up and don't want to be spoiled.

Costume is key to the superhero's identity in that it renders them distinct from their alter egos and the squishy, vulnerable humans they're supposed to protect. Many are also ridiculous builds out of rubber or spandex highlighting impossibly pumped muscle, chest plates and codpieces drawing attention to implied virility or sex appeal.

"The Boys," Amazon's sinister flip on the comic book genre, punctuates all of that by clothing its superheroes in visual signifiers.

Homelander (Antony Starr) is the title's jingoistic answer to Superman, the sneering Übermensch who leads the top-tier hero team known as The Seven. He's never seen wearing anything other than his blue uniform, including a version of an American flag cascading down his back and golden eagle heads armoring his shoulders.

Starlight (Erin Moriarty), the team's representative of righteousness and purity, is kitted out in a white and yellow gold leotard that bares her cleavage and, as she laments, is too tight to accommodate pockets. Queen Maeve (Dominique McElligott), the title's Wonder Woman send-up, sports a bustier as armor over a Roman centurion-style skirt.

Each hero's image – indeed, their lives – is shaped and run by a multibillion dollar corporation called Vought, which has insinuated itself into every aspect of America. Vought is a version of an "everything" company that sells toys, frozen foods, snacks, pharmaceuticals, you name it. It also contractually controls the lives of each member of The Seven. Everything they say, do, and wear in public is filtered through teams of stylists and marketing specialists.

This brings us to Stormfront (Aya Cash), the second season's newcomer, a catsuit-clad oppositionist. (Cash's casting also is conscientious in this regard – she's best known for her role on FX's comedy "You're the Worst," where she plays a snarky, cynical PR rep.)

Stormfront's suit is a dark twin to Homelander's Aryan jingoist get-up, a work in charcoal and blood scarlet, her stars and stripes rendered in inky metal armbands. It all but announces her as some maverick version of Homelander.

Stormfront's cleverly disguised truth is a few shades more menacing than what she's wearing, though. She's hiding her true identity within her name – the one she uses now and a past moniker too.

That Cash's character shares her name with an infamous white supremacist website isn't accidental. Nor, for that matter, is the series creator Eric Kripke's choice to make Stormfront a woman instead of a man, as the comic's creators Darick Robertson and Garth Ennis (the co-creator of "Preacher") originally drew the character.

In decades past, Stormfront went by the name Liberty, a post-war crusader belle hooded in red, white and blue and a popular spokeswoman for an array of products, including the American concept of freedom. The irony is that before she put on a cape for America, she worked for a cause and a nation antithetical to everything for which the United States supposedly stands. Here's another hint: to call her a neo-Nazi isn't entirely accurate.

"The Boys" is an adrenalized critique of our culture's worship of comic book heroes, an entertainment genre molded by companies and studios into something akin to a secular religion. Robertson and Ennis make their supes the villains in this story while its heroes are a band of very human outlaws driven by revenge. Each member of the titular team has been wronged by Vought and its superheroes in some way, as has the chemically created super in their midst, a fugitive named Kimiko (Karen Fukuhara).

And this second season "The Boys" is doing a fantastic job of skewering corporate entities like Vought for the role they play in ushering in fascism. Vought's tactic is as American as cloth fluttering on Homelander's shoulders, which is to constantly brand and rebrand itself and its properties until nobody can recall the origin of whatever it is that they're selling. This storyline has a basis in reality – look up the history of Bayer, a common aspirin brand. It, like Vought, traces its backstory to Nazi Germany.

Stormfront, for all of her hipster cloaking and rousing, power-to-the-people protests, is nothing more than a bigot in a superhero's uniform. This was revealed in the third episode during a mission to capture a "super" terrorist (Kimiko's brother, in reality) that resulted in a chase through a rundown apartment occupied by Black families.

Once she's beyond the range of cameras, Stormfront goes off script.

She suddenly decides everyone's a target and fries a father in front of his children, disintegrates their apartment, kills another man who has the misfortune of coming down the same stairs her quarry is ascending, blows up an entire floor. Finally she corners her man on the roof, nearly tearing off his hands and whispering a racist epithet to him as she crushes the life out of him.

Hours later, having pinned the blame on the foreign threat and with the news cameras rolling, she helps an aid organization comfort the people she didn't murder outright and accepts the thanks of a grateful public.

In keeping with the spirit of Vought using The Seven as symbols that speak to a culture that is convinced of its out righteousness, Kripke and the series' other producers use Stormfront, Starlight and Maeve to speak to our susceptibility when it comes to commodifying causes into product lines and repainting villains into heroes.

In the first season, Starlight went public about being sexually assaulted by a team member, The Deep (Chace Crawford), and her trauma was transformed into an image boost that made her a symbol for survivors.

A major subplot this season involves Homelander forcing Maeve to come out as a lesbian; although she's actually bisexual, the Vought branding gurus explain the public finds it easier to accept binary sexual identities. Shortly afterward and very much against her will she becomes the face of all kinds of rainbow-branded products, including a power bar targeted at the LGBTQ demographic.

Stormfront is more troubling given Vought's effort to alloy her image with feminist power, agency and gender when behind the scenes she has a history of terrorizing men and women of color and creating misinformation memes and propaganda designed to woo a pliant public to her own fascistic aims.

This should seem familiar to every viewer because it's the America we're living in right now, a democracy brought to the brink because a failed businessman that a game show producer revamped to look like a corporate titan decided he wants to be strongman. Ours is a culture that loves that praises feminism as long as it only helps a certain type of woman. That's proven time and again within all sorts of systems, from the publishing industry to politics and all ports in between.

But it's even there in supposedly noble efforts, including the unveiling of a statue in New York City to mark Women's Equality Day that features Susan B. Anthony and Elizabeth Cady Stanton sitting at a table with Sojourner Truth. The pedestal identifying them as Women's Right Pioneers neglects to include the part of history where Stanton and other white suffragists used racist rhetoric to argue for the white woman's right to vote at the expense of Black men and women.

Through Stormfront, "The Boys" takes the additional step of linking white feminism to the aims of white male patriarchy. Vought's superhero story rests on the foundational myth that superheroes are born, not made, and that their purpose is to protect and save humanity.

The truth that eventually leaks to the public is that Vought's "supes" are the product of a formula known as Compound V, and that in order to protect America from the threat posed to them from "terrorists" trying to immigrate illegally it should be made widely available. Stormfront vocally advocates for that cause at fan rallies and via histrionic social media memes.

But the average person doesn't need heightened strength or senses to take justice into their own hands. In the show's world and ours, guns are as prevalent as fantasies about using them heroically.

"The Boys" makes no effort to downplay its intensity. Every episode choreographs explosions and outlandish gore into the action. Nearly every member of The Seven is some version of an extreme hypocrite. But the violence Stormfront commits is bloodless, a poison seeping into ears and invading hearts and minds by way of memes.

It's a familiar story of how violence, and bigotry can be spun and restyled as greatness, how authoritarianism rides in on a carpet made of the stars and bars. The American dream, the show says, is itself a costume disguising its bigotry behind a mask of supposed equality. And the only way to overpower that villainy is by shredding it.

Season 2 of "The Boys" is currently streaming on Amazon. New episodes debut on Fridays.