Director Alyx Ayn Arumpac takes to the streets of Manila for this unflinching docmentary, available through AAIFF 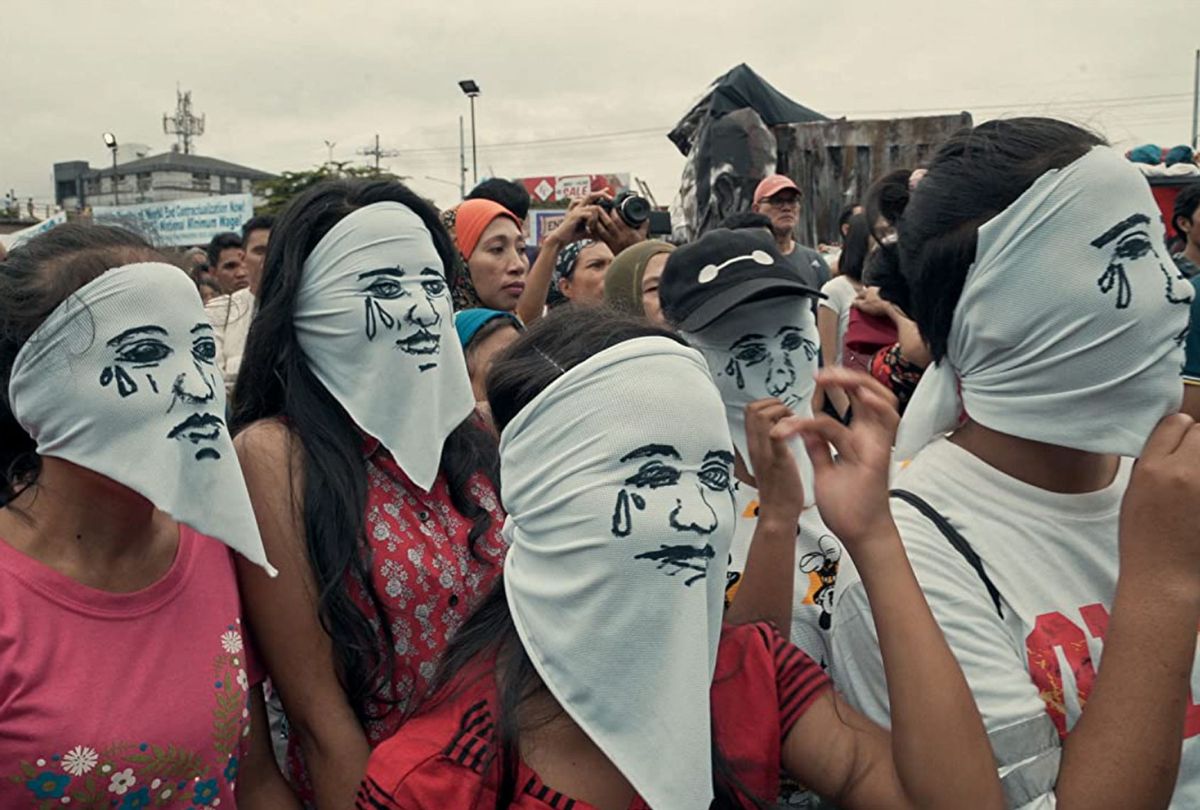 The title of the harrowing documentary, "Aswang," refers to the myth of "a shapeshifter that preys on humans and kills anyone who dares to look back." It is a fitting metaphor for Rodrigo Duterte, the controversial President of the Philippines, whose "war on drugs" — he vows to kill drug users — has resulted in 31,232 deaths according to one source. Most of these deaths, which are dubbed "extra-judicial killings" (meaning not legalized), are innocent poor people. However, the film features a radio report of a police general giving an interview that says there is no evidence to support the claim that the government is behind these murders.

In "Aswang," screening online at the Asian American International Film Festival, director Alyx Ayn Arumpac provides a chilling tour of these mean streets of Manila. A woman sweeps away a river of blood and the air is permeated with death. Someone in the film states that one can "taste the metal — not from bullets or knives — but blood."

Most viewers will want a deep-cleaning shower after watching this worthwhile documentary. Arumpac fearlessly observes several crime scenes. She attends a meeting where she learns that a church program that provided funeral assistance for the poor saw the requests raise from 1-2 a week to 3-5 a day. One coffin, seen in the film, has a baby chick placed on top of it, signifying that the killer runs loose. The filmmaker also visits a morgue that puts unidentified bodies in a mass grave if they are unclaimed after three months. Another scene features a group of men, walking through the streets self-flagellating, and bloodying their backs in a prayer for forgiveness. These episodes are all vividly rendered with indelible images that give viewers a queasy "you are there" feeling of life on these unforgiving city streets.

Arumpac includes affecting interviews with family members of victims who have been murdered. A mother, whose son was killed, explains that the police report says he was shot while riding a motorcycle. But, she insists, not only did he not own a motorcycle, he did not know how to ride one. She wants justice for her son but acknowledges there will not be any consequences. A widow says she won't file a complaint about her murdered husband because "It won't bring him back," adding, "Even if he were guilty [and it is implied he is not] why kill him?" Another man mourns his innocent brother, "What they did to [him] was wrong," he acknowledges. But, oddly, he claims to be "for Duterte." According to one remarkable statistic in the film, 85% of Filipinos support Duterte's antidrug campaign.

The government is seen mostly in statistics and reports. The film is showcasing the conditions of the poor who are seen laying like sardines in a can in one jail cell. As one subject in the film observes, "If a poor man commits wrongdoing, he is killed; A rich man goes to an air-conditioned jail." There are scenes of people sleeping atop graves, and a man sifting through trash.

"Aswang" also follows Jomari, a young boy whose mother is in jail for drug addiction. Arumpac helps him get sandals and a Lakers jersey for a Saturday visit to his mom in prison. However, seeing Jomari, who dreams of being a policeman, play with his friend among trash, picking out empty packets which are used for drugs, steers the film into poverty porn. Jomari's endangerment is echoed in a report that children are forbidden to go out because of the threats on their lives. This is borne out when Jomari disappears for a stretch of the film, and Arumpac tries to track him down, hoping he is OK.

"Fear is inevitable" is another line spoken in the film, and it is credited to someone doing drugs, who must trust their source and the people around them not to become a victim. Drugs are their vice, as it is for so many others, and "Aswang" captures the risk these folks are taking without judgment. Likewise, there are men who claim they work mostly to support their children and give them a future.

The film is a study in contrasts. The anguished wails of pain from mourners are numbing and juxtaposed with protesters urging to "stop the killings." There are heartfelt testimonies and pleas for safety as well as the burning question, "Why does the war on drugs only target the poor?"

"Aswang" culminates in what may be the most shocking sequence as a woman who was kidnapped gives testimony about her experiences in a secret jail. She draws the cabinet that hides the door in the wall of a police station where folks were imprisoned; if they did not pay 100,000 pesos for their freedom, they would be charged with selling or using drugs. When a Commission on Human Rights uncovers the secret jail, one man interviewed describes being electrocuted. Arumpac's camera enters the claustrophobic space and viewers can only imagine how 30 people were kept there in dehumanizing conditions.

Arumpac documents these moments in an unflinching manner. Her film is difficult, but its power is unshakable.

"Aswang" is available to watch on demand from Oct. 1-11 through the 43rd Asian American International Film Festival.