With death all around us, when do Halloween celebrations become too macabre? 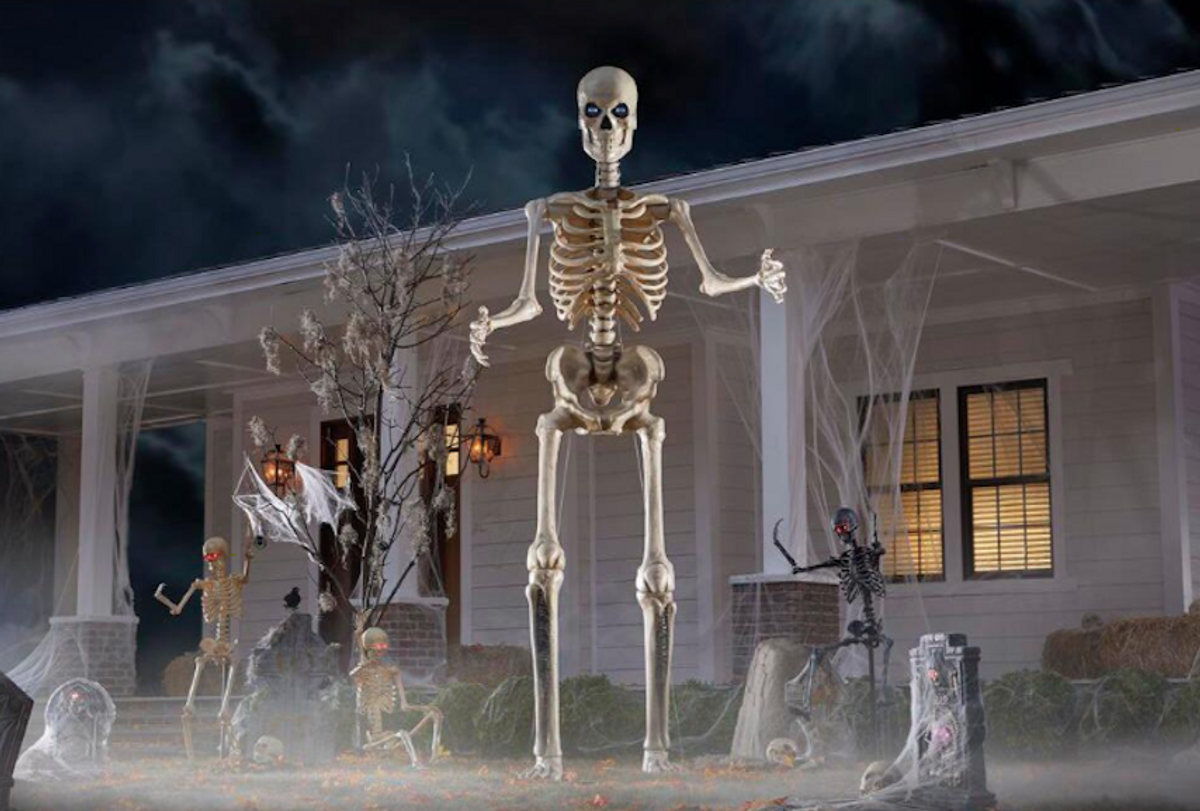 The day before President Donald Trump announced that he had tested positive for the novel coronavirus, I received an email from Home Depot's merchant for decorative holidays letting me know that, indeed, all their $300 "Giant-Sized Skeletons with LifeEyes" were completely sold out.

Photos of the oversized Halloween decoration had dominated social media for about a week before. "Happy Boyfriend Day to my one true love, the giant Home Depot skeleton," one Twitter user wrote, while another said, "I love you giant skeleton, I just can't afford you."

At some point, Budweiser posted a photo of the skeleton holding a 50-inch body pillow shaped like a beer. For a brief moment, the decoration became a macabre sex symbol of sorts (the bone jokes write themselves) and Twitter was flooded with marriage proposals for and references to the "hot Home Depot skeleton."

It was a bizarre micro-chapter of the pandemic zeitgeist that closed as suddenly as it opened, and offered some insight into the ways in which we continue to get by in these unprecedented times: Death is all around us. Let's put 12-foot-tall plastic skeletons in our yards?

In a way, it makes sense. Halloween is traditionally a season to confront topics surrounding mortality. As Vittoria Elliott and Kevin McDonald wrote for The Washington Post in 2018, the holiday has its origins in the first millennium A.D. in the Celtic Irish holiday Samhain.

"According to Lisa Morton, author of 'Trick or Treat: A History of Halloween,' Samhain was a New Year's celebration held in the fall, a sort of seasonal acknowledgment of the annual change from a season of life to one of death," they wrote. "The Celts used Samhain celebrations to settle debts, thin their herds of livestock and appease the spirits: the kinds of preparations one might make if they are genuinely unsure whether they will survive the winter."

But over the last several decades, Elliot and McDonald wrote, American Halloween has lost its connection to death. "Sexy avocado costumes obscure the holiday's historical roots and the role it once played in allowing people to engage with mortality."

Leading up to this October, however, America's collective consciousness has been hyper-focused on sickness and mortality. Since the World Health Organization declared a global pandemic in early March, over a million people have died of COVID-19. During that same period of time, Americans have had to evaluate what kinds of topical or gallows humor serves as a necessary coping mechanism, and what kinds cross a line. Halloween supercharges those tensions.

Some things feel obviously wrong. For example, many Halloween costume companies — even Yandy, which has previously come under scrutiny for their revealing  "Handmaid's Tale"-inspired costumes — are opting out of selling "sexy COVID" costumes in 2020.

"I don't think there's anything sexy about it," Pilar Quintana-Williams, Yandy's vice president of merchandising, said in a recent interview with Business Insider.

The company is, however, releasing sexy hand sanitizer and banana bread-inspired costumes as a nod to the current moment — which, depending on your brand of humor, likely falls somewhere on the "tacky, but innocuous" spectrum. Less innocent are the legion of rubber masks that are shaped like the coronavirus as it appears under a microscope, with demonic eyes and sharp teeth added.

Rachel Power, Chief Executive of the Patients Association, told The Sun in a recent interview that  "these masks show a terrible lapse of judgement by the manufacturers and sellers, and I hope they will be removed from sale quickly.

"I've no doubt the great majority of people will find them hugely distasteful," she said. "I can't imagine that many people would wish to wear one."

Amazon has reportedly removed some of these masks in recent weeks following consumer complaints, but more continue to pop up for sale for those who wish to do some coronavirus cosplay.

"The red mask looks like a virosome, disgusting and scary enough. If you like pranks, please wear it. You will succeed!" one remaining Amazon description reads.

Dark Halloween-themed humor about actual living people — specifically politicians — is contentious, too. Take this week's vice-presidential debate, during which a fly landed on Vice President Mike Pence's head for 2 minutes and 3 seconds. In less than two hours, the Biden campaign released special branded fly swatters; by Thursday morning there was already a Debate Fly Halloween wig.

As Salon's Melanie McFarland wrote, "television series and films employ flies to hint at a character's lifelessness, lack of humanity or dedicated evil" and as such, Twitter exploded with seasonally appropriate hot takes about Pence's state of being. Was he a reanimated corpse? A rotting zombie? Dead on the inside as a result of his abhorrent politics?

Any or all of the above, per social media. Will the observations be less amusing if the rumors that Pence has actually contracted the coronavirus are true? Probably, but for now most people are still stuck on who will play The Fly on "Saturday Night Live" this week (my vote is Beck Bennett, for what it's worth).

Meanwhile, as McFarland reported earlier this week, most late-night comedians seem to have arrived at the conclusion "that when it comes to reaping material from Trump's infection with the novel coronavirus, joke season is now officially open." This comes as many Americans are navigating the ethical and religious implications of any schadenfreude they experienced upon hearing the news of the president's diagnosis, or the humor they find in those jokes.

But should Trump's hypothetical demise be translated into Halloween decor? That's a question that divided a New York neighborhood in 2017 when a Cortlandt man crafted a lawn display with a fake corpse and a Donald Trump tombstone with the phrase "Burn in Hell" written underneath his name.

Fabian Vergara, the owner of the display, told reporters at the time that he planned on removing the tombstone decoration after being approached by some neighbors who asked him to take it down. But when one neighbor, mimicking a statement made by the president multiple times, told Vergara, who was a native of Ecuador, and his wife and children to "go back to their country," he decided against it.

The display stayed up for the season, but I doubt it would, or truly should, this year, as many of us contemplate not only our own mortality, but the ultimate survival of our country, with or without Trump. Those are big topics to consider, all centered on death, something that we as Americans aren't particularly adept at contextualizing.

In that way, it makes sense that the giant skeleton became something of a mascot. Amid unthinkable stress, omnipresent suffering and months of prolonged uncertainty, the decoration is outsized in its morbidity and absurdity, an emblem for this Halloween and this year.