Why telemedicine may actually be making healthcare more human

I was a skeptic, until our doctors started making "house calls" 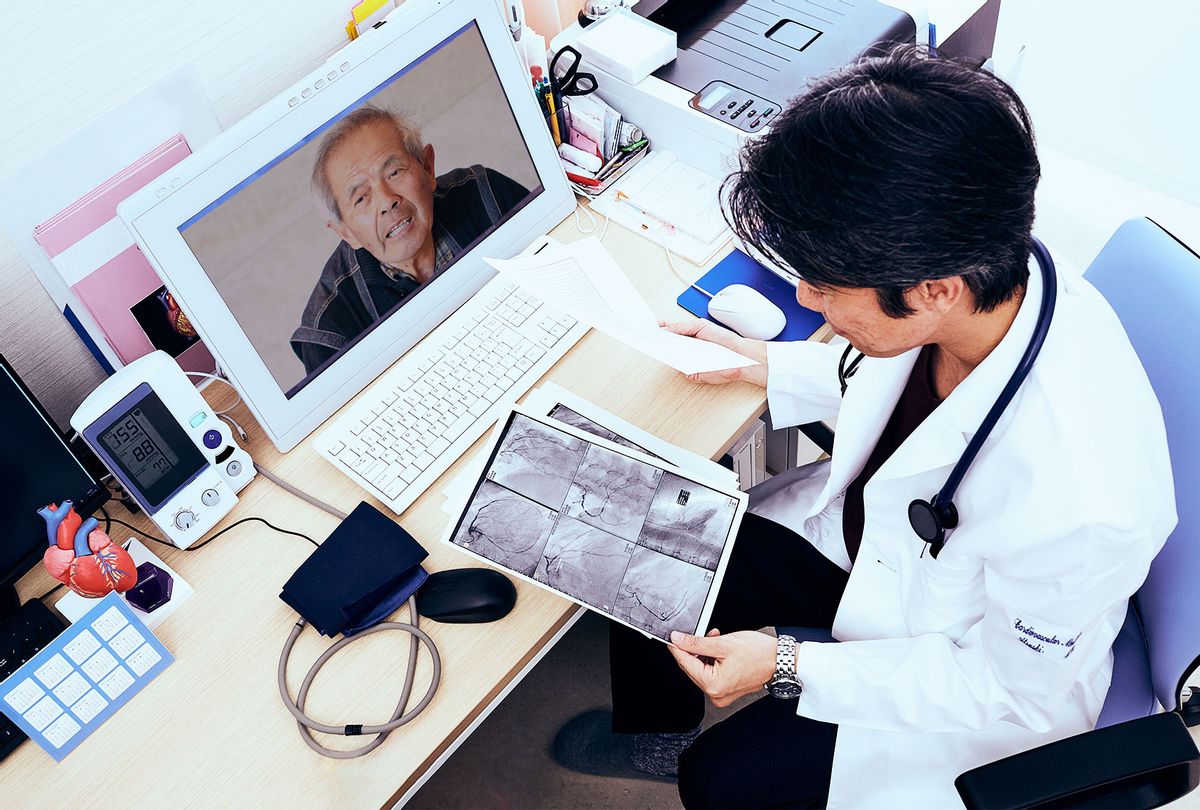 It's not as if office visits were ever that great. Nobody in their right mind has any love for long waiting times, paper gowns, or chilly exam rooms where you can't even get cellphone reception. Yet when the COVID-19 outbreak abruptly interrupted my own medical plans this year, I dreaded the thought of moving the process over to telemedicine. I anticipated adding to my already considerable Zoom fatigue, feeling rushed and depersonalized. What I found instead was a whole new way approach healthcare — one that might actually bring more humanity into the process, for patients and doctors alike.

I realized it the recent afternoon that my immunologist of nine years saw my living room. I had met him when I had metastatic melanoma and was facing a near certain imminent demise. In most of our numerous interactions since, he has been wearing a white coat and I have been wearing a robe. We have been within the walls of a hospital, where I've already been checked in, weighed and assessed by a gauntlet of strangers before we even speak. This time, however, we were on my turf. I was in my chair. My teen daughter was in the background, texting her friends. The geography of our interaction had been altered, and I found myself more attentive and receptive to the information being communicated.

Maybe I shouldn't have been so surprised. We know that stress can affect cognition and memory; it stands to reason that an environment that's more comfortable would be more efficient for taking in the often overwhelming, difficult information our doctors give us. That the news was positive was a plus. But that's not the only reason it was also a far easier conversation than the one I'd had six months earlier with another doctor, in a tiny, spooky room in an office on an inconvenient side of town.

As Dr. Judd Hollander of the Sidney Kimmel Medical College of Thomas Jefferson University explains, conventional medical wisdom suggests that "If you are going to tell someone bad news like they have cancer, they want to hear it in person." But, he says, "That might be true for some patients. There might be other patients who don't want to travel 80 miles and drive home alone or with their spouse after hearing that news, [when] they might have it delivered in the comfort of their family room with their whole immediate family around them."

"My analogy," he says, "is that once or twice in your life you're in a very trivial car accident, and my experience is I am shaking for hours afterwards. I'm fortunate that no one has told me I have cancer. But I can imagine, if I'm shaking after a minor car accident, am I going to want to be driving home after being told that? I don't think so."

As just one concrete example, he adds, "We've had some focus groups around women with post-mastectomy care. Everybody thinks that nobody's going to want to show their breast on video. But when you realize the alternative is sitting in a cold, sterile room in a gown, and there are people who walk in and out of the room besides the doctor, isn't being examined on video better for some people than being examined in person? It is. It is a very, very personal decision, and I like to look at telemedicine as one more tool clinicians can use."

Ingrid Fetel Lee, author of "Joyful: The Surprising Power of Ordinary Things to Create Extraordinary Happiness" echoes that sentiment. She notes that doctor appointments often "tend to be stressful.... Western healthcare is often separated from the rest of your life. Telemedicine opens up the opportunity to engage with context." But she notes that telemedicine can be a "double-edged sword" for many. "You're dealing with incredible variabilities, like maybe not having as much privacy. Maybe your space isn't comfortable. Environment may be a contributor to anxiety, and it may be hard to detach."

As anyone who has been working remotely the past several months can attest, home is not always a sanctuary, being able to conduct a productive adult conversation from the chaos of it is not always an option. I'm fortunate that my home is safe, and that I have stable Internet access. But roughly ten percent of the US population either doesn't have or doesn't use internet access. And it's no surprise that older, low income, non-white and rural Americans make up the bulk of that number. Telemedicine is a privilege reserved for those who can access it.

Yet telemedicine might also prove to be an equalizer in opening up who gets access to expert care. When Dr. Hollander co-authored an article on telemedicine and COVID-19 for the New England Journal of Medicine back in April, it naturally focused on safe practices for virus screening. But it also touched on some promising other applications, including "rapid access to subspecialists who aren't immediately available in person."

"We can take the expertise that exists at Jefferson and deliver it to hospitals in our region or across the nation," Hollander says, noting several other hospitals across the nation have similar systems. "We have a neurosurgical program that's been around for close to a decade that delivers stroke care to 38 hospitals in the region. A neurosurgeon might be home on a tablet, seeing the patient in a hospital 75 miles away, looking at their CAT scan and deciding whether they are candidates for the clot busting drug. The beauty of that is you get to transport the expertise to an area it otherwise doesn't exist. And just as important, you get to leave the patient in the community with their family at that community hospital, rather than ship them 75 miles away for the rest of their stroke care. You can deliver better care, closer to home."

The barriers to quality in-person care don't just exist for people who live far from major medical centers. They span a broad range of patient populations. I never in a million years would have imagined my 87 year-old mother-in-law an enthusiastic Zoom adopter, but for the better part of the year it has been her lifeline to her church community. In the past few weeks, it has also become essential to her survival. As a sudden and still baffling set of symptoms have presented themselves, she has often been debilitatingly weak and frustratingly confused.

It's obvious how logistically and emotionally difficult it would be right now for her to go in person to the string of doctors she's been consulting with. For patients with disabilities, dementia, chronic pain or other inherent obstacles to travel, telemedicine can provide reassuring expertise without the burdens of transportation.

Similarly, if you're like my older daughter who's away at college, telemedicine can be an effective means for patients away from their home base to keep their regular appointments with their specialists. What used to be a simple day trip back home is now off the table for students like her all across the country. In the midst of an absolute crap tsunami of a year, I can't be the only person grateful that my loved ones can see their doctors — even when I can't take them to their doctors.

I used to fret that telemedicine was going to wring the last bits of human interaction — and empathy — out of a system that is already fraught and perplexing. But my thinking was too binary. For many of us, it won't be one or the other, either/or. It'll be a mix of circumstantial assessments, and, one hopes, personal choice. In the past few weeks, I have gone in person to three different medical facilities for various tests, because you can't do a blood draw over the phone. When I have an upcoming surgery, it won't be conducted via laptop. But I'll be more than happy for the follow-up to be.

As Hollander puts it, it, "I think what we've learned is telemedicine is just a care delivery mechanism. The medicine is the same. The manner in which it's delivered is slightly different… Maybe not every patient every time, but there is certainly a time and a place for many patients. If you build it in the care continuum, you might actually have more touchpoints and deliver better care over a period of time."

My own doctor, meanwhile, says that while he believes there are pros and cons to telemedicine, "It does change the patient perspective to a person perspective." A person in a living room, in regular clothes, and a little less scared and vulnerable.