Is Trump just a performer or a would-be fascist dictator? If you see a contradiction, you're missing the point 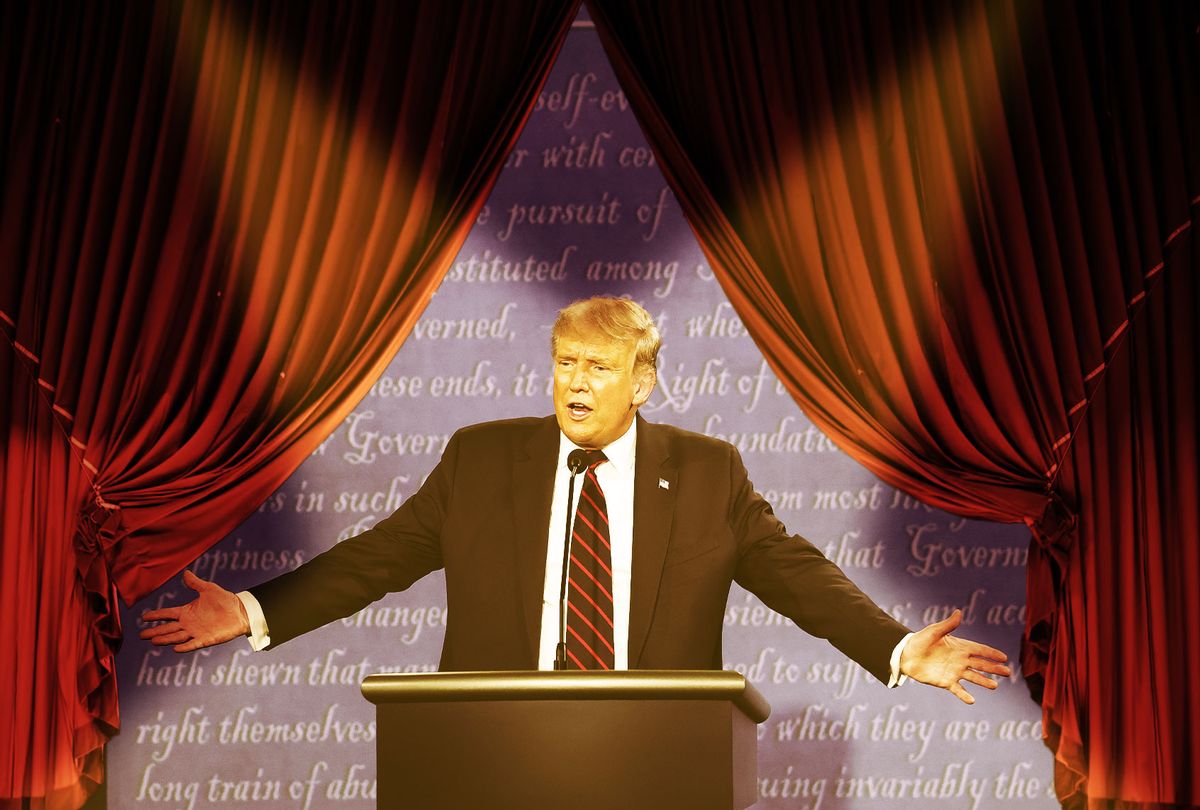 If it weren't for the human lives damaged or destroyed by Donald Trump's presidency — the 215,000 or so killed by the coronavirus is only the beginning, of course — the whole insane experience could be understood as a brilliant, confrontational work of performance art. It's a vulgar and moronic performance, to be sure, and one that pushes the audience's willingness to suspend disbelief to its outer limits. But it's also a work of indisputable genius, one that has hypnotized media and public around the world for the better part of five years.

Viewed through the dark lens of a fully nihilistic or totalitarian aesthetics, where the work of art transcends all ordinary morality — and if Donald Trump had a theory of aesthetics, that would be it — even the cruelty and recklessness of his performance is an aspect of its brilliance. From the beginning, Trump told us that he could commit murder in public without alienating his supporters. Many of us understood that as a figure of speech. His greatest and most malicious accomplishment in public life (so far) has been to prove, on a grand scale, that it was literally true.

To cite another example, there is no viable argument that the partnership between Trump and Stephen Miller, his most notably sadistic adviser, has been politically successful. Almost all of their vindictive anti-immigrant agenda has been wildly unpopular, and much of it has been abandoned or thrown out by the courts. But as a theatrical display of faux-macho dominance, fueled by shared bitterness and unconcealed racial resentment, the Trump-Miller act has been immensely satisfying to its intended audience.

To suggest that Trump is fundamentally a salesman, a con man and a performer is certainly nothing new. He has been shaped by the worlds of New York real estate, tabloid publicity, professional wrestling and reality TV, where bullshit is everything and even the physical reality of land, buildings and human bodies is a disputable afterthought. But some people seem to get stuck on an imaginary dichotomy or contradiction between Trump as showman and Trump as wannabe tyrant, as if his oft-expressed desire to seize full power and rule forever were not in itself an aspect of the performance.

With the apparent implosion of Trump's re-election campaign amid his preposterous attempt to turn a major coronavirus cluster in and around the White House — including his own infection, and the possibility that he infected many other people — into a great symbolic victory, the distinction between Fascist Trump and Showman Trump has collapsed entirely.

I'm not suggesting that Trump didn't or doesn't want to "win" again and is consciously sabotaging himself, or that he doesn't enjoy the dimly-sketched fantasy world — its details no doubt supplied by Miller or Bill Barr or other factotums with a better grasp of logistics — in which he overturns the Constitution and is declared president for life. As New York Times critic James Poniewozik recently noted in an interview with Salon, Trump cannot conceive of any version of reality where he isn't a "winner," universally proclaimed as one of the great men of history. (He won't come right out and claim to be the very greatest — but, you know, some people are saying that!)

Trump appears to possess no interior life worth talking about — I envision it as resembling an anthill, perennially under attack by a small boy with a stick — and clearly isn't capable of the kind of subtle introspection that might lead to deliberate self-destruction, even as an expression of grandiosity. But he only wants to be installed as Führer of a New Trumpian Reich if that too is a performance and other people do the real work.

We can all agree that Trump has shown no aptitude for governance, but despite the liberal paranoid trauma left over from the 2016 election, he's no good at politics either: His vaunted "movement" consists entirely of red hats and vile rhetoric. He has never demanded any sacrifices from his followers, let alone that they actually do anything. He cheers on their dipshit outbreaks of violence and farcical terrorist plots — remove yourself from the proximate sense of alarm, and the scheme to kidnap Michigan Gov. Gretchen Whitmer sounds like a future season of the FX series "Fargo" — but, honestly, you can tell his heart isn't in it. I don't mean that he feels any sense of compassion or responsibility, only that he's reluctant to endorse anything that pulls the spotlight away from him.

In the inner circles of TrumpWorld, whose denizens have sustained themselves by blending crime-family omertà with a shared delusion of historical destiny, the cognitive dissonance must now be off the charts. Faced with the prospect of a sweeping, landscape-shifting defeat just weeks from now, more cynical Republicans like Sen. Lindsey Graham of South Carolina and Sen. John Cornyn of Texas — both of whom face unexpectedly tight re-election battles — have begun to subtly edge themselves away from Trump and rehearse the speeches they may need to make four or five days into November.

(Of course I'm aware of the nightmare scenarios that keep #Resistance liberals up all night: Millions of mail ballots thrown out, a reverse-engineered Electoral College, Trump re-elected in a state-by-state vote in the House of Representatives. It would be foolish to claim those things are impossible, or that Bill Barr hasn't carefully considered them all. But honestly: Is that the way the wind is blowing? At the moment, a Democratic landslide in which Trump is conclusively defeated and Republicans lose six or seven Senate seats is a far more likely scenario.)

But that cognitive dissonance is far less of a problem for Donald Trump personally than for the people around him. I think Poniewozik is on the right track in suggesting that Trump can turn whatever happens into a grand narrative of heroism and martyrdom, with himself in the starring role.

We've told ourselves all along that Trump is a pathological narcissist who doesn't care about other people, and sees them only as reflections of himself. (The temperament, in other words, of a diva.) He slanders and demonizes his critics and opponents, betrays his so-called friends without a moment's hesitation, feels only contempt for his worshipful supporters, and denies the existence of any objective reality. That was all true enough, but as things now appear, it was only the beginning.

If the chaos and ugliness Trump has channeled into American political life will be with us for decades to come — and is just one part of a worldwide crisis of democracy with no clear resolution in sight — he himself is about to transcend all that. Like any great performer, Trump is following his instincts rather than plotting out a rational course, and the culminating act of his public performance will synthesize and outstrip everything that has before. Rather than yield to any external force — political, legal, medical or scientific — Trump stands ready to destroy his own political career, and the political party he adopted, invaded and conquered.

It's a bit of a cliché at this point, not to mention overly flattering, to compare Donald Trump to John Milton's antiheroic Satan. But if Trump were capable of reading and understanding such things, he'd no doubt enjoy the comparison:

What though the field be lost?
All is not lost; the unconquerable Will,
And study of revenge, immortal hate,
And courage never to submit or yield:
And what is else not to be overcome?

Given the pimped-out, pseudo-Wagnerian theater of TrumpWorld, a spectacular auto-da-fé is the only remotely adequate way to bring down the curtain. He will of course proclaim this self-immolation to be a great victory, and as seen in the rearview mirror of history, he may have a point. Like Satan, Trump has shown us how far we have fallen and how easily we are corrupted. To see him as the villain of the story is missing the point.