Seinfeld's bland new book "Is This Anything?" is $35 dollars' worth of ambivalence and old jokes 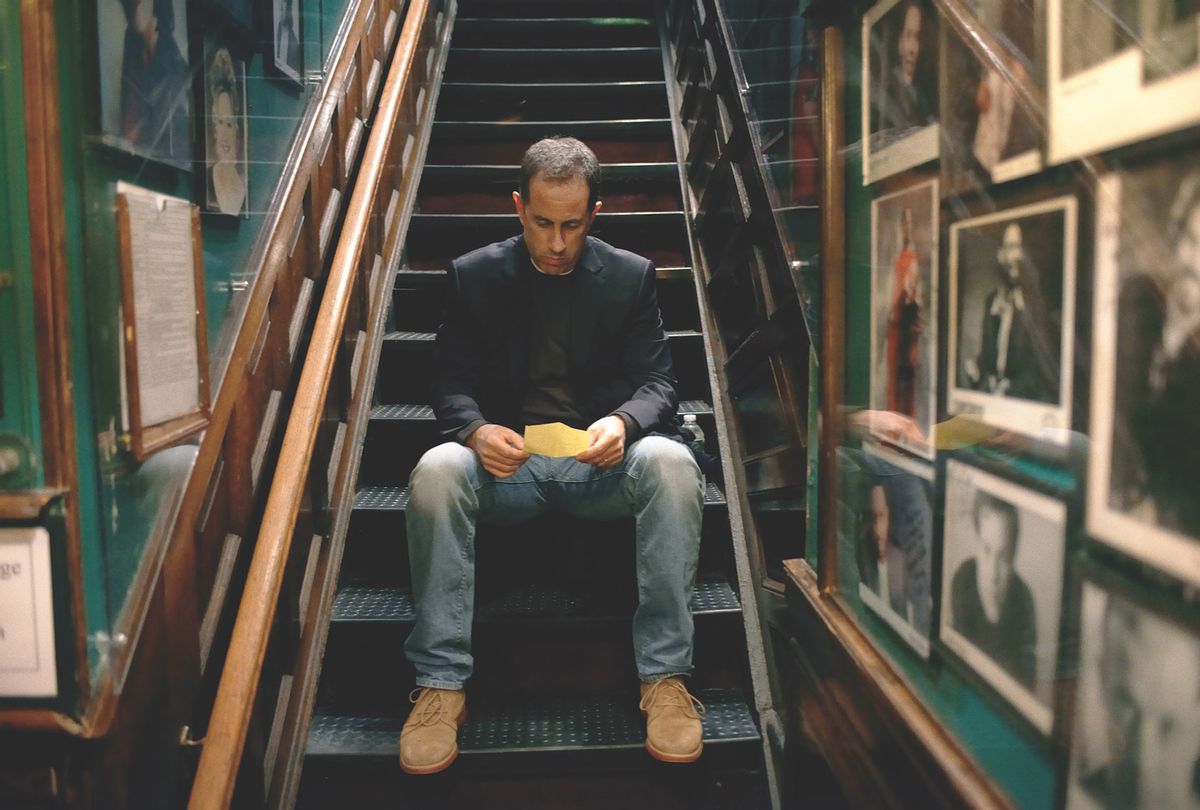 Jerry Seinfeld "Is This Anything?" (Finlay Mackay/Trunk Archive, Courtesy of Simon & Schuster)
--

On May 14, 1998, I walked onstage in my best clothes, seething. As 76 million people settled in to watch the "Seinfeld" finale, I was required to join my fifth-grade classmates at the spring band concert. The sitcom was going out on top after nine seasons having drawn devoted viewers by creating a contained yet vast universe with hundreds of characters, and each Thursday, their humdrum interactions escalated into comforting ridiculousness. My affection for "Seinfeld" — and its creators — long outlasted the clarinet.

Since then, I've devoured Jerry Seinfeld's work and "Seinfeld"-adjacent programming ("Curb Your Enthusiasm," "Veep," "Silicon Valley"). Thus I should be the target audience for Seinfeld's latest book, "Is This Anything?" (Simon & Schuster, Oct. 6), only his second book after "SeinLanguage" (Bantam Books) published way back in 1993. Yet as I read, nothing surprised me. I began itemizing which jokes came from what specials and appearances, just to stay engaged. In the opening pages, Seinfeld acknowledges that this book was largely his agent's idea; he repurposes enough of his prior bestseller to merit asking whether his ambivalence toward the project ever waned. "Is This Anything?" isn't just bland; it accentuates the problems with what Seinfeld offers today's audience, and perhaps who he's become.

Released by different publishers in different centuries, Seinfeld's two books carry contrasting aesthetics, too. The stark, monochromatic cover of "Is This Anything?" would look fresh from an Apple assembly line if not for the title's implied shrug. Inside, the 470-page book looks like a poetry anthology, with double-spacing, one sentence per line and minimal photos. Meanwhile, "SeinLanguage" was emblazoned with Annie Leibovitz portraits, and that slim volume functioned as a pseudo scavenger hunt, tempting "Seinfeld" viewers to find the observations behind featured storylines ("The problem with the mall garage is that everything looks the same").

"Is This Anything?" is sliced into five chronological segments, each housing his favorite bits that originated in the given decade — from "Lobster Tank" to "Parent Ducklings" and "The NY Faux Courtesy Jog." These chapters are separated by predictable introductory essays, while most of the material in "The Seventies" and "The Eighties" — a full 40% of the book — was previously published in "SeinLanguage." To those who've attended or streamed Seinfeld performances, the layout only exaggerates how long he keeps certain jokes in rotation.

When promoting the book on "60 Minutes," Seinfeld said,"What I'm interested in is the craft and technique and approach to doing an art . . . Look[ing] at how these bits are built, you can kind of learn, 'I see why this word is here.'" But "Is This Anything?" is not overtly instructional. Seinfeld is eyeing his personal legacy, not guiding future comics toward their unique voice. The scribbling, shaping, working out, riffing and polishing happened before the first word was printed.

If the intended audience is not tomorrow's stand-ups, then it's likely yesterday's Seinfeld fans. Still, all of us — including the folks at Simon & Schuster — live in the present, and "Is This Anything?" arrived on Oct. 6, during the final month of a brutal presidential race. Like Jay Leno during his "Tonight Show" tenures, Seinfeld eschews politics in his act. In his 2017 Netflix special "Jerry Before Seinfeld," he sidestepped the new reality of Trump's America: "People say, 'I think the president might be crazy' . . . What do you expect? Anybody who thinks they should be president — there's your test right there." Then he deconstructed the dueling party mascots. "Jerry Seinfeld: 23 Hours to Kill" never referenced the government.

No one could expect "Is This Anything?" to change that trajectory, especially considering the success he's seen while staying the course. When USA Today asked Seinfeld about political humor, he replied, "I'm not good at it. And I don't like 'we agree' applause. As a comedian, I don't think that's fun to get." However, an apolitical stance is also a lucrative business strategy — Seinfeld maintains the broad likability needed to sell out arenas — and, according to Forbes, he was the second-highest earning comedian of 2019 ($41 million), bested only by Kevin Hart ($59 million).

Now, amid a global pandemic, the resurgence of the Black Lives Matter protests and a Supreme Court vacancy, there is so much to say about the historic moment we're living in — but Seinfeld barely tries. "Is This Anything?" provides a handful of coronavirus mentions among its scant new material (although they are catalogued in "The Teens" chapter, as in 2010-2019); to further reflect the world he now lives in, Seinfeld wisely kept a "SeinLanguage" reference to Bill Cosby from being republished.

A few holdovers about the police make Seinfeld seem oblivious to the ongoing cycle of racial violence and inherited trauma. A "Seventies" bit called "Cops/Posse" starts, "I think I could enjoy a career in law enforcement. Seems like fun catching people doing stuff." Seinfeld has good intentions in an "Eighties" entry, "Crooked Head Protect," where he teases arresting officers who warn a man not to hit his head as he enters a police car — but only after the police "hit him with the nightstick. Get him in a chokehold. Cuff him behind his back." Post-Eric Garner and George Floyd, the word choice rings callous. The thematic sequence continues with the entries "Crook Life," "Crook Reputation" and "Chalk Outline Guy."

"Is This Anything?" is an evergreen career retrospective that serves as a distraction from the urgency rather than a response to it. If the book had more personality, more candor or more material that hadn't already been presented in other mediums, a Seinfeld treasury might serve as a joyful escape. Instead, the book invites questions about why he decided to assemble "an impressionistic autobiography told through jokes" instead of a genuine autobiography.

While younger comedians have turned their gaze inward — bonding with live and social media audiences by disclosing personal f*ck-ups and near misses and dumb luck — Seinfeld, 66, has cultivated an impenetrable public persona. "Is This Anything?" supports a glum realization that's been nagging at me throughout adulthood: Seinfeld does not want his fans to really know him.

Books Is This Anything? Jerry Seinfeld Review