The media could still screw up the election. Here's what they need to do instead

This not a normal election between two opposing candidates, and the news media needs to say so clearly 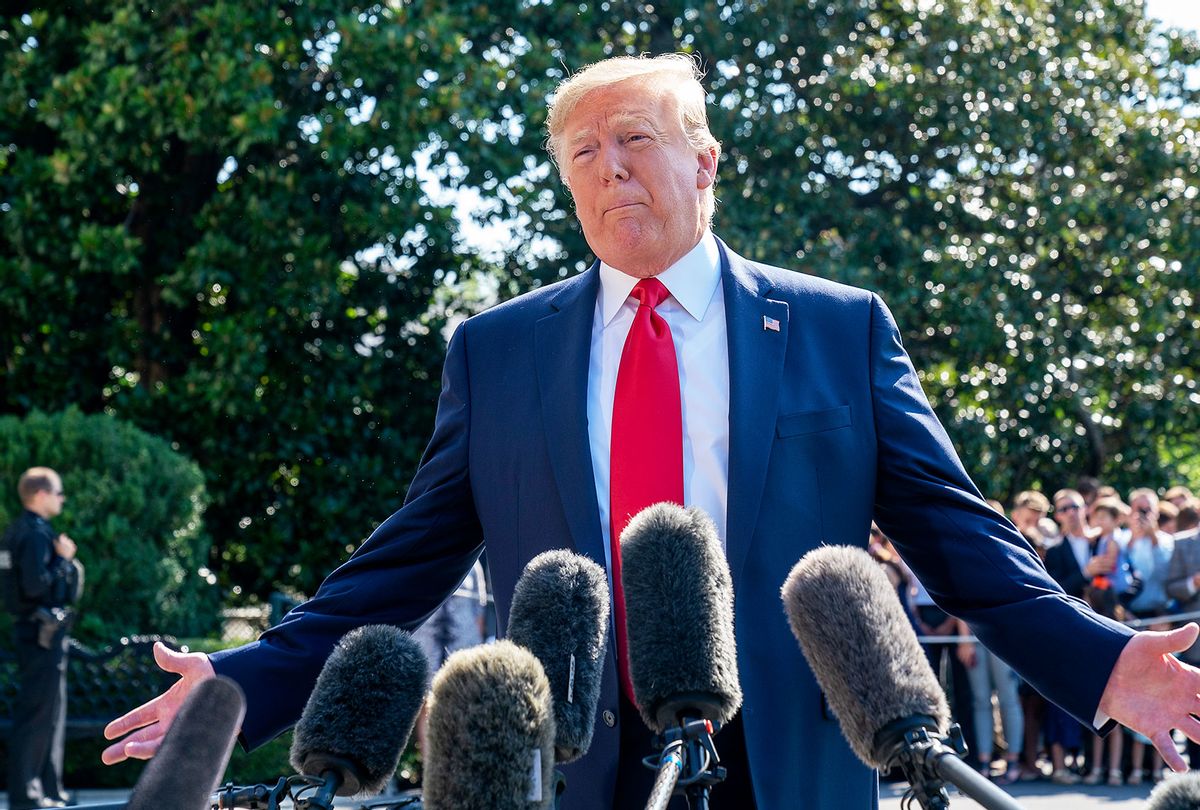 With the signs growing ever clearer that the American people are in the process of rejecting Donald Trump from the body politic, journalists should seize the moment to pivot to a more honest assessment of the urgent need to stop the extraordinary damage he has done to the country.

Step one is to clearly convey in every report about the campaign, or about Trump, how re-electing him would be incredibly dangerous.

It would be literally dangerous: His willful ineptitude in the face of a pandemic has killed more Americans than died in World War I, and counting.

It would also be re-electing someone who is clearly not rational – whose words simply do not comport to reality, in a way vastly more alarming than any other major political figure in American history.

Every report that even vaguely relates to the campaign should be firmly set in the context that this is not just a normal election between two people with opposing views; it's a referendum on competence and democracy and unity and sanity.

Every half-decent political journalist in America knows this.

So do most Americans. (Many of them are wondering why the press won't say so, and are sorely disappointed.)

But clearly not all Americans grasp the severity of the danger. And that's why news organizations need to drop the moral distancing and the euphemisms and make it crystal clear, while it still makes a difference.

Normalizing the election – treating it like a game, framing the campaign coverage as if there were a rational choice each way – enables the ignorant and weak-willed to cast their votes for Trump.

And yeah, I know they don't read the New York Times and the Washington Post. But maybe they read their local newspaper, which carries Times and Post wire stories, along with the Associated Press. Maybe they listen to the evening news. Maybe they'll read a news story posted by a friend.

I'm not suggesting that all of Trump's support is based on ignorance. Some is legitimate. Aggrieved racist white Christian men who long for a return to supremacy have found a kindred spirit. Authoritarian submissives have found their man – and fully 29 percent of Americans, according to the Voter Study Group, believe that a "strong leader who doesn't have to bother with Congress and elections" is a good way to govern a country. Far-right ideologues who care more about the Supreme Court than anything else are understandably pleased with Trump, as are plutocrats who care only about not paying taxes. Some Republicans obviously believe that Republican control is worth it no matter the cost.

But the seemingly endless interviews with Trump fans in the heartland have exposed the reality that, for many ordinary people, support for Trump is based on misinformation and vague social pressure. And those could, potentially, be offset by a mainstream media as aggressive about fighting misinformation as Fox News is in spreading it — and by consistent messaging that re-electing Trump would have profound negative consequences well beyond the normal.

Creating an informed electorate is the most noble goal of the Fourth Estate. The challenge, in these next few weeks, couldn't be clearer.

But instead of educating the ignorant and properly framing the contest, what we still get far too often is irresponsible, breathless sport-style coverage, as if this were just a big game. We get attempts to find symmetry and a suspenseful contest even where none exists.

That was perhaps best illustrated Thursday morning on NBC's "Today" show, with news staffers shilling for a Trump town hall event that network brass shamelessly and irresponsibly scheduled against a Biden event on ABC.

Host Savannah Guthrie introduced the segment by saying that "With high stakes and just 19 days to go, our newest poll, just out this morning, shows a race that is tightening." (The actual poll shows Biden maintaining his double-digit lead.)

Then she turned it over to White House correspondent Hallie Jackson, who said that "Tonight really represents one of the last opportunities that he has to try to make his case and turn the tide."

The inertia of complacency

The calculations major newsroom executives made after Trump was elected aren't hard to fathom. Despite the obvious state of emergency, they made a conscious decision to give him the benefit of the doubt and treat him like a normal president. The alternative was to have to explain, every day, how irrational and racist and authoritarian he was, and they didn't want to do that because he was going to be around for a while and that sounded exhausting, plus they really didn't want to be called partisan or hysterical.

But now the clock is running down. And it's not just how close we are to the election. It's also that Trump has gotten even more erratic and dangerous.

His flame-out in Cleveland and the spectacle of his self-inflicted infection with the coronavirus and ensuing (and continuing) cover-up emboldened many political reporters to take a somewhat less tranquilized tone in their reporting of those events.

(And what happened? Was there an outcry from centrist readers demanding more objectivity? Hardly!)

But meanwhile, Trump has also been ramping up his defiance of legal, precedential and constitutional limits to authoritarianism — challenging the integrity of the election, calling for the indictment of his political opponents — in a way that should be sending reporters into full red-alert mode.

As the legendary newsman Hedrick Smith wrote on his blog on Monday:

We have all become so inured to Donald Trump's erratic, volcanic, beyond-the-bounds behavior that we may not have absorbed the alarming reality that in the past two weeks, the President of the United States has posed what some would term a "clear and present danger" to our nation's bedrock institutions,  what could potentially become the most serious danger since the Civil War.

In a powerful news analysis, New York Times senior writer David Sanger wrote on Oct. 10 that Trump's statements had become "so blatant that one had to look to authoritarian nations to make comparisons."

But as New York University journalism professor Jay Rosen asked: "If his actions were without precedent should your coverage break with precedent, as well?"

Times executive editor Dean Baquet thinks his newsroom has already made the necessary adjustments. "I think early on we probably tried to attach our traditional rules of coverage, our traditional norms, to Donald Trump—and he defied them," he told Tom Kludt of Vanity Fair. "The American press covers extensively when the president of the United States briefs and makes comments about issues, but you have to cover it very differently when the president of the United States obfuscates and often misleads people and sometimes lies."

And I'll grant him that news analyses – at the Times and elsewhere – have gotten considerably bolder about calling out Trump's failings.

But that hasn't translated to the daily news stories that, I suspect, get more readership, especially when picked up in local newspapers.

(Consider, for instance, the stark contrast between this AP analysis by Hope Yen, Calvin Woodward and Ellen Knickmeyer, definitively stating that "Trump demonstrated anew this past week he can't be relied on to give a straight account of the disease that has afflicted millions, now including him," with this credulous day-of stenography by Zeke Miller, Jill Colvin and Jonathan Lemire.)

The aversion to "taking sides" in political journalism comes out of a legitimate desire to avoid being partisan. Partisans don't like facts that don't support their political positions. Journalists need to acknowledge facts no matter what position they support.

"Taking sides" against Trump, however, isn't actually partisan. I mean, of course it is, to the extent that the message is anti-Republican, because almost every elected Republican leader has been coopted by Trumpism. But you can also think of it as tough love – an intervention by people who care – for a party that has lost touch with reality.

When it comes to Trump, the aversion to "taking sides" leads to creating false equivalences between two things that are radically unequal – and that's just bad journalism.

For decades, Editorial Board endorsements — including presidential endorsements — have followed a time-honored and standard format, carefully laying out the merits and flaws of two candidates, comparing, contrasting, and arguing for the board's choice of candidate….

But …there is no common ground shared by Trump and Biden. Trump's lack of respect for the office he holds, his disregard for the country who looks for sound, informed, and unifying leadership, and his contempt for the democratic principles this country was founded on, make such comparisons both futile and absurd. To contrast Trump with a candidate like Biden, who has spent his life in public service, who has gravitas as well as experience in domestic and foreign affairs, and who, frankly, has a healthy relationship with reality, would do a disservice to Biden.

There's a reason why virtually no newspaper in the country — even those that are highly conservative, and have typically endorsed Republicans — has or will endorse Trump. People who care about news also value the truth, and freedom of the press, and a number of other core values under attack by Trump.

Trump's former guru, the white nationalist Steve Bannon, famously told Michael Lewis in 2018: "The Democrats don't matter. The real opposition is the media. And the way to deal with them is to flood the zone with shit."

The way to fight back is to flood the zone with truth.