Undoing the damage done: What will it take to rebuild what's left of our government?

Trump's reign of corruption has left the federal government in ruins. Necessary repair work may take many years 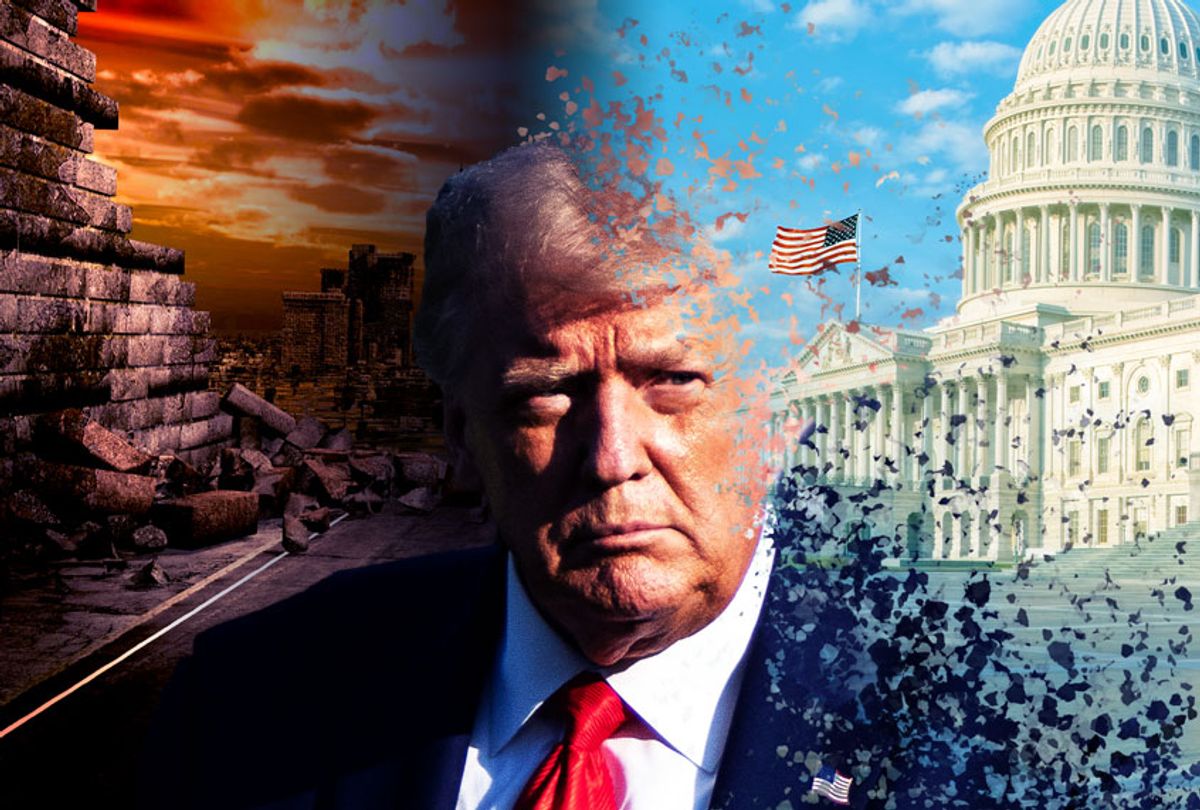 Who remembers Tom Price? Gee, you might say, that name sounds familiar … he had something to do with the Trump administration, didn't he?

You're right! He was one of those guys who resigned from a cabinet position because he was abusing something … let me see … think I've got it … he was the one who took all those flights on private jets, something like a million dollars worth of flights, including on military aircraft during trips to Europe and Africa with his wife. He refunded $51,887 to the federal government, which he said accounted for the cost of his seat on private charter flights he took before he resigned from Trump's cabinet. But that was just the cost of his seat. The total amount spent to fly old Tom Price around the world on private jets was more than $400,000 in taxpayer dollars.

What cabinet position did he hold that made it necessary for so many trips on chartered private jets and other business aircraft? What was he doing that was so important that he was flying back and forth to Europe and Africa and making trips to Aspen and Salt Lake City and Nashville, and basically jetting all over the place on the taxpayers' dime and staying in first-class hotels and eating out at expensive restaurants and taking his wife along with him a lot of the time? Oh, I remember! He was the secretary of Health and Human Services. He was the dude who resigned after only 231 days in office, the shortest term ever served by an HHS secretary. Price had been a right-wing congressman from Georgia who during his term in the House voted multiple times to repeal the Affordable Care Act, supported a Republican plan to privatize Medicare, voted to defund Planned Parenthood and sponsored the "Right to Life Act," which would have defined life as beginning at conception and banned all abortions and many forms of contraception.

Busy, busy man, old Tom, with all those flights around the world and fighting to repeal Obamacare and defund Planned Parenthood and banning abortion. Took up a lot of his time. In fact, it took up the time he could have spent studying the plan to contain pandemics which was left for him at the Department of Health and Human Services by the Obama administration. But old Tom Price didn't study that plan, did he? No, he shelved the Obama pandemic plan, where it stayed as his successor, Alex Azar, was appointed. So it was Azar who was running HHS when COVID hit in February of this year, and it was Azar who left the pandemic plan on the shelf and was first put in charge of the pandemic task force at the White House, until Vice President Pence took over that job. It was Azar who appointed Brian Harrison, a 37-year-old former labradoodle breeder with zero education and zero background in public health as the department's top man in charge of organizing the HHS response to the COVID crisis. Now he has overseen the appointment of two more nonentities with no background in public health or epidemiology to keep Centers for Disease Control and Prevention director Robert Redfield "in line," and to control messaging on the coronavirus pandemic coming out of the department. Oh, I almost forgot: Azar also supports ending the Affordable Care Act and defunding Planned Parenthood and banning abortion and every other whacked-out right wing idea that ever came down the pike.

Are you beginning to get the picture here? Health and Human Services is just one Trump cabinet department that has been led by not one, but two half-wit hacks and undercut by the White House from Day One. Both HHS and CDC have been hollowed out and weakened under the control of the Trump White House while some 220,000 Americans have lost their lives and 8 million more have been infected by the COVID virus.

Trump's ravaging of the rest of the government has followed the same script. Remember Scott Pruitt, Trump's first administrator of the Environmental Protection Agency? He lasted just about a year before he resigned under the cloud of investigations by the U.S. Office of Special Counsel, the Government Accountability Office, the EPA inspector general and 11 other federal agencies and congressional committees. Pruitt was another Trumpazoid incompetent who flew around on chartered jets and used EPA employees to reserve tables for dinner at exclusive Washington restaurants. He set the EPA on a course to undo nearly every Obama administration environmental accomplishment. He fired all the scientists on the Board of Scientific Counselors and replaced them with representatives of industries regulated by the EPA.

When he left the agency in disgrace, Pruitt was replaced by his deputy, Andrew Wheeler, a former coal industry lobbyist, who proceeded apace to continue the fine legacy left to him by his predecessor. Wheeler has weakened regulations on coal fired electrical plants and declined to raise standards for "fine soot pollution" under a mandated review. In the midst of the COVID pandemic, Wheeler's EPA announced that it would not enforce regulations for "routine compliance monitoring [of pollution], integrity testing, sampling, laboratory analysis, training and reporting or certification obligations." In other words, polluting industries, here's your get-out-of-jail-free COVID card, courtesy of your friendly EPA.

Donald Trump's pillaging of the rest of the federal government is equally astonishing. He's gone through cabinet secretaries like they were an order of Big Macs. Secretary of State Rex Tillerson? Gone early on, replaced by Mike Pompeo. Attorney General Jeff Sessions? Out the door in disgrace. In his place, the odious Bill Barr (after a brief appearance by the totally incompetent Matt Whitaker). Secretary of Energy Rick Perry? Bye-bye in a blink. Secretary of Labor Alex Acosta? Resigned in disgrace for his connection to a kid-gloves plea arrangement with famed pedophile and presidential friend Jeffrey Epstein. Secretary of Defense James Mattis? Resigned in protest against Trump's haphazard misuse of U.S. military forces. Interior Secretary Ryan Zinke? Resigned rather than face federal investigation for using his office for personal gain. Director of National Intelligence Dan Coats? Ousted in a Trumpian power play to politicize the intelligence community.

Trump has proceeded to appoint acting secretaries to replace expired acting secretaries. Recently, one of his attempts to get around the rules hit a wall when a federal judge in Montana ordered the removal of the acting director of the Bureau of Land Management, William Perry Pendley, who he found had been serving illegally for 400 days without Senate confirmation. Pendley has been an advocate of selling federal lands to the states or private citizens.

There is more, much, much more, but you get the picture. The damage Trump will be leaving to Joe Biden is incalculable. The death toll caused by his mismanagement of the COVID crisis and the numbers of infections increase by the thousands seemingly every day. The only good thing about a hollowed-out federal government will be the thousands of appointments Biden will be able to make upon taking office, and the dozens of executive orders he'll be able to sign reversing Trump's giveaways to polluters, drug companies and corrupt corporations.

All we've got to do is get out and vote to make that happen.