Republicans clearly never intended to pass a new relief bill — so why has the media consistently blamed Democrats? 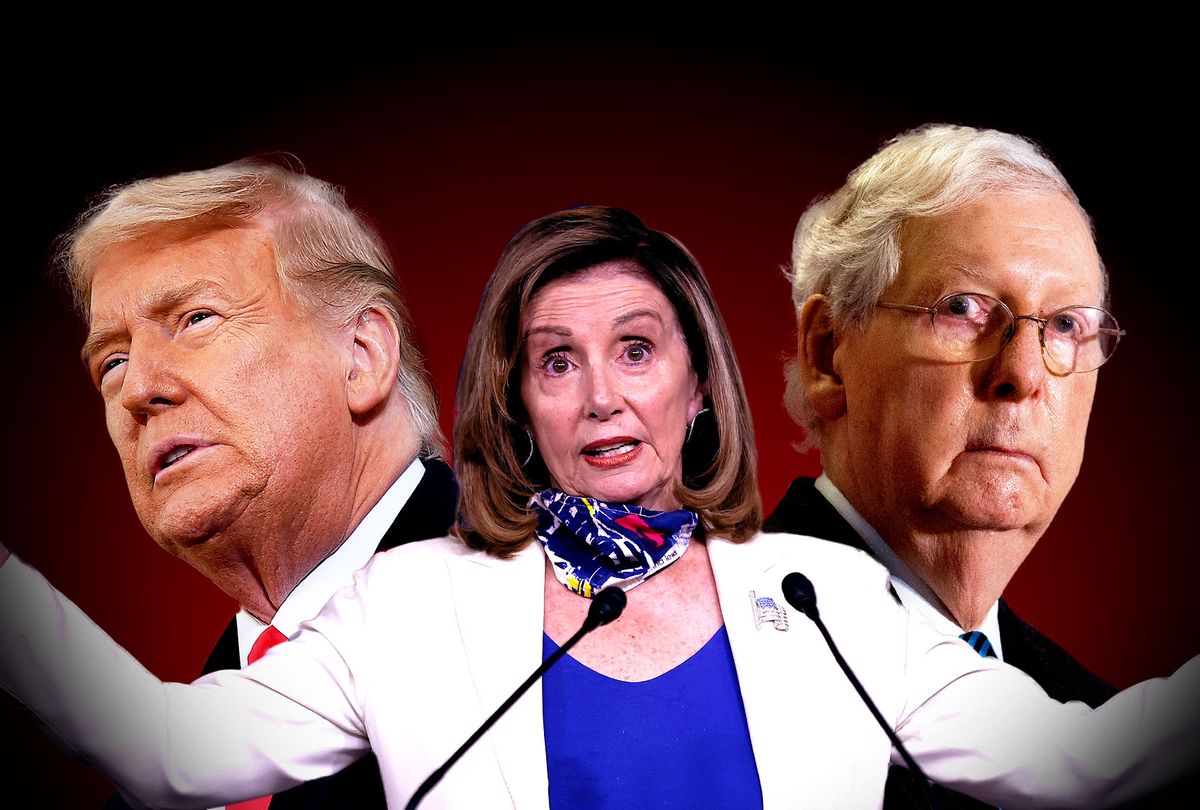 For months, Congress has failed to pass a coronavirus relief bill, despite the widespread economic devastation and the fact that, under Donald Trump's malicious mismanagement, the pandemic has spiraled out of control, infecting 8.25 million people and killing more than 220,000, as of Wednesday morning.

The mainstream media has firmly decided who they blame for the lack of a bill: Speaker of the House Nancy Pelosi and the Democrats who control the lower house of Congress. Blaming Democrats has been the dominant press narrative, even though it's been obvious from the get-go that Republicans don't want more relief legislation.

Now we have concrete proof that Republicans are to blame: Late Tuesday, the Washington Post reported that Senate Majority Leader Mitch McConnell "has warned the White House not to strike an agreement," on the grounds that any new deal struck with Pelosi and the Democrats and "could disrupt the Senate's plans to confirm Amy Coney Barrett to the Supreme Court next week."

To anyone unburdened by the delusion that "balance" is a more important journalistic principle than truth, it was always obvious that Republicans were the reason no coronavirus bill was getting passed. For one thing, House Democrats already passed a robust relief bill in May, which Senate Republicans have basically ignored while avoiding any substantive efforts at negotiating a bill that can pass both houses. For another thing, there are obvious ideological differences between Democrats, where even the party's "moderate" wing supports increased social spending, and Republicans, whose only real goal is moving as much wealth as possible from the hands of working people to the rich.

Even setting common sense aside, there's plenty of concrete evidence that McConnell had no intention of passing a bill to stimulate the economy and control the pandemic. When he was asked in July if such a bill was going to pass, he laughed contemptuously. Facing down an August deadline when unemployment benefits from previous coronavirus relief legislation were set to expire, McConnell chose to adjourn the Senate instead of working on a replacement bill. When Trump started getting sweaty and worried this month, believing he needed such a bill to have a chance at re-election, McConnell torpedoed the idea yet again.

McConnell's behavior is not mysterious. For one thing, he's an ideologue who actively opposes any government spending that might reduce the vast wealth inequalities that plague our nation. Indeed, McConnell's main goal these days is installing Barrett on the Supreme Court — where she will arguably be the most reliably right-wing vote, or second only to Justice Clarence Thomas — in time for her to strike down the Affordable Care Act. Moreover, Trump's erratic behavior — angrily rejecting a bill and then desperately tweeting his longing for one hours later — strongly suggests that the president is torn between his hopes that such a bill can save his fading hopes of re-election and pressure from Republican senators not to pass one.

Nor does McConnell seem worried about the electoral consequences to Republicans of a collapsing economy. For one thing, he likely thinks that Trump will lose in November, and that he can do nothing to save the president from his downward spiral. So he's setting up a potential Joe Biden presidency to fail by refusing economic relief now. For another thing, McConnell's multi-year strategy of capturing the courts, voter suppression and gerrymandering is paying off. He has good reason to believe that Republican control of government will not be seriously imperiled by democratic accountability, even if Democrats win both the Senate and the White House this time around.

Despite all this, mainstream media has been desperate to blame the Democrats for a lack of a bill. As Media Matters has documented, CNN's coverage has been tilted for months toward suggestions that Democrats are the ones blocking new relief legislation. Shows like "Meet the Press" on NBC and "This Week" on ABC have uncritically advanced the narrative that Democrats are deliberately tanking the relief bill to damage Trump, even though Democrats are the ones who are actively negotiating with the White House while Senate Republicans twiddle their thumbs.

Things came to a head last week when Pelosi lashed out at CNN's Wolf Blitzer after Blitzer said that Americans were "waiting in food lines" and proceeded to blame Pelosi, rather than Republicans, for the lack of a bill.

Pelosi responded by saying, "I don't know if you're always an apologist — and many of your colleagues — for the Republican position" and followed up by telling Blitzer, "You really don't know what you're talking about."

That response set off a predictable round of sexist finger-wagging for Pelosi's supposedly out-of-control behavior — the male-dominated media really hates it when women talk back — but whoops, it turns out she was right. Blitzer was carrying water for sleazy Republicans who want to do nothing, while pretending the entire situation is Democrats' fault. McConnell is eagerly monkey-wrenching any effort to pass a new bill, and doing so while actively trying to seat a Supreme Court justice he hopes will destroy the Affordable Care Act, further plunging the American economy into chaos and causing the pandemic to get even worse.

Why on earth is the media so devoted to blaming Democrats, when Republicans are clearly the problem here? Part of it, as the response to the Blitzer/Pelosi exchange shows, is sexism. Pelosi is the lone female leader in Capitol Hill, and despite some #MeToo purges, there are still a lot of sexist men in control of the media and eager to find excuses to pin the blame for any and all problems on women.

But mostly, the issue is the plain old "both sides" fallacy, the one that leads reporters to believe that in the interest of "balance" they must pretend that Democrats are just as bad as Republicans, even if the facts show the opposite.

Over the past year, Republicans have been especially repulsive, covering for Trump's crimes that led to his impeachment and making excuses for his refusal to deal with a pandemic that's laying waste to the country. Far too many journalists are bending over backward to find some terrible thing they can say about Democrats in the name of "balance," and they've landed on these empty accusations about a stimulus bill.

Moreover, deliberately destroying the economy in order to undermine a sitting president of the opposition party is the sort of thing Republicans would do — and indeed have done. Under the false but stalwart media belief that "both sides" are equally bad, therefore, the assumption has reigned that Democrats are doing the same that, even though there's no real evidence for that. On the contrary, it's much likelier story that McConnell knows Biden is likely to be president soon, so he's pre-emptively undermining the economy to damage his administration in advance.

The reveal that it was Republicans who were the bad guys all along is unlikely to change the media's insistence on covering national politics through a "both sides" lens. The fear of getting angry tweets from conservatives about "bias" will apparently never stop mattering more than the actual truth. But it's just possible this report will make it a little harder for the Wolf Blitzers of the world to wax sentimental about the millions of Americans thrust into poverty while pretending that this is somehow Nancy Pelosi and the Democrats' fault.