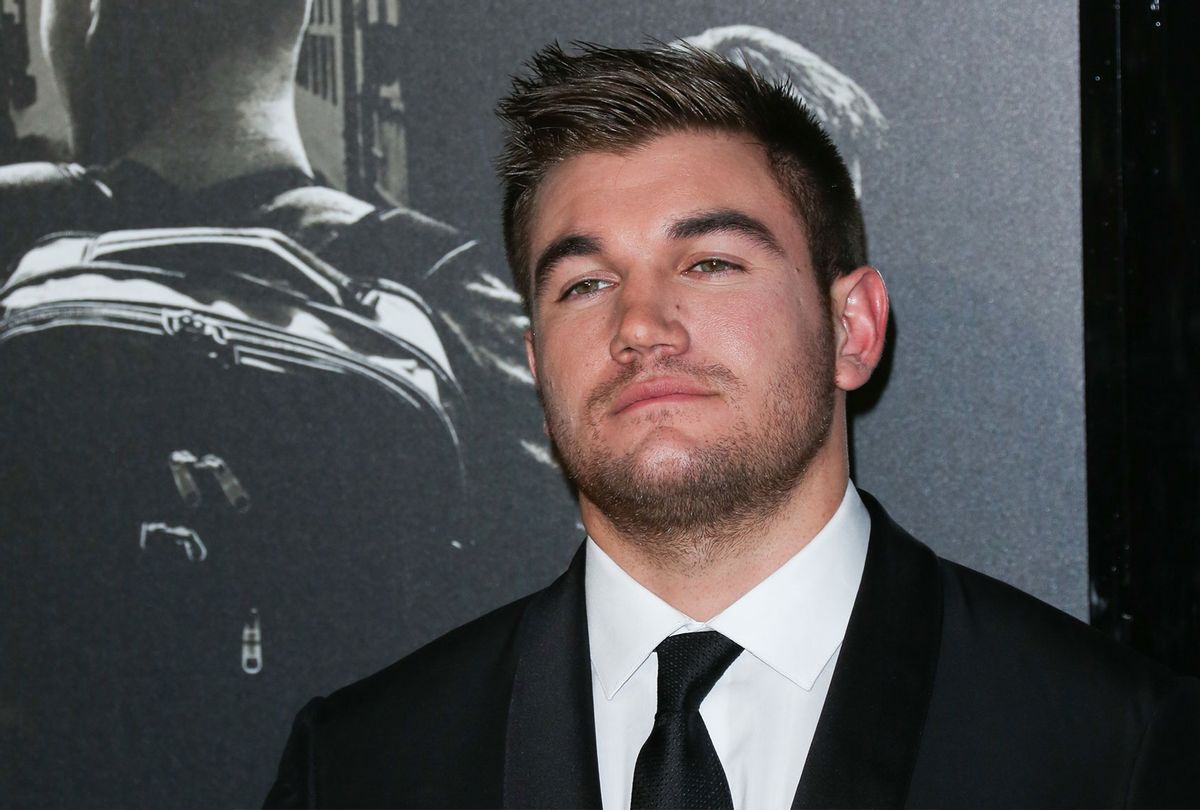 Alek Skarlatos attends the premiere of "The 15:17 To Paris" at Warner Bros. Studios on February 5, 2018 in Burbank, California. (Paul Archuleta/FilmMagic)
--

An Oregon congressional candidate who drew worldwide acclaim for helping to stop a terror attack faces questions about his "affiliations" to extremists ahead of Election Day.

Former Oregon National Guardsman Alex Skarlatos, better known as the "Paris train hero" after he and four others subdued a gunman while traveling in Europe in 2015, is running in Oregon's 4th Congressional District. Democratic groups claim that his association with Timber Unity, a group linked to extremist groups such as the Proud Boys, QAnon and the Three Percenter movement, raises "serious questions about his affiliations."

"Alek Skarlatos has been hoping to skate through this election without answering any real questions — and with good reason. The more we learn about him, the more troubling his candidacy gets, and his association with an extreme right wing group is just the latest alarming news about him," Abby Curran Horrell, executive director of House Majority PAC, said in a statement to Salon. "Alek Skarlatos needs to disavow this group immediately, or answer serious questions about his affiliations."

Skarlatos' campaign did not respond to questions from Salon. Julie Parrish, a Timber Unity board member, told Salon in an emailed statement that reports linking the group to extremists were hit pieces.

"Let me be really clear: Our board doesn't support racism in any way, shape or form," she said. "We're not part of QAnon, or any other group. We have one focus — protect jobs for working Oregonians in the natural resource sector — regardless of their party, race, sexual orientation or gender."

Skarlatos was honored in 2015 by former President Barack Obama and former French President Francois Hollande for rushing to confront a man linked to ISIS who was armed with an AK-47 and a pistol. His heroics earned him and his friends, Air Force veteran Spencer Stone and Anthony Sadler, a book deal. The men later portrayed themselves in Clint Eastwood's film adaptation of "The 15:17 to Paris." Skarlatos went on to appear on "Dancing With the Stars" and "Who Wants to Be a Millionaire?"

Skarlatos, a conservative who served in Afghanistan, soon became a frequent guest on Fox News. He attempted to use his newfound notoriety in 2018 to launch a bid to become Douglas County Commissioner in his home state but fell short. Not wanting to "waste" his popularity, the 28-year-old launched a bid earlier this year to unseat Rep. Peter DeFazio, D-Ore., who has represented the district for 33 years.

Skarlatos, who has been accused by Democrats of "blindly backing Trump or wanting to dismantle health care protections," according to Politico, is the first serious opponent DeFazio has faced in years in an increasingly red district which President Donald Trump lost by about 0.1% in 2016. Skarlatos outraised DeFazio in the last quarter in a contest which is expected to become the most expensive House race in state history. His bid has been financially backed by House Leader Kevin McCarthy, R-Calif., House Minority Whip Steve Scalise, R-La., and Sen. Ted Cruz, R-Tx.

Skarlatos has repeatedly praised the president but pushed back on the "Trump Republican" label, vowing to represent "the loggers, the veterans, moms, dads and families trying to make ends meet" against the "extremes" in Washington. However, he previously stated in a deleted tweet that he supports Trump "100%."

With a focus on the timber industry and forest management amid the state's wildfires, Skarlatos has pushed a debunked conspiracy theory that the fires stop at the Canadian border and are not growing in other countries like Germany. Skarlatos has said he does not "believe" that climate change is to blame for the growing fires despite scientists repeatedly pointing to climate change as a key reason.

He has also argued that the government's response to the coronavirus pandemic has been an "overreaction" — and the virus is not "that lethal" — while opposing federal unemployment benefits to Americans laid off amid the crisis.

Skarlatos, who describes himself as a libertarian, has taken other positions outside of the mainstream, such as opposing any new gun laws and arguing that there should be no minimum wage.

He has endorsed Republican Senate candidate Jo Rae Perkins, who has pledged her allegiance to the QAnon conspiracy theory and attended events hosted by a group linked to QAnon supporters and other fringe groups in Oregon.

Skarlatos has allied himself with Timber Unity, a new right-wing "anti-environment" group linked to a Republican walkout which thwarted legislation aimed at combating climate change, according to Mother Jones. The group's members have reportedly "had no qualms associating with violent extremists and far-right groups," including being photographed with members of "neofascist or militia groups." Their rallies have "prominently featured messages backing QAnon," and their private Facebook group is "awash with violent threats, conspiracy theories and sometimes racist messages that likely violate the platform's terms of service," according to the report.

Some members have allegedly made death threats against Oregon Gov. Kate Brown, a Democrat, and pushed conspiracy theories about vaccines and George Soros, a frequent target of anti-Semitic attacks, per Mother Jones.

The group's leaders have also been linked to the far-right "Three Percenters" movement, QAnon supporters and the Proud Boys.

Though the group does not endorse federal candidates, board member Todd Stoffel told KOIN-TV that Skarlatos was "a member of our movement, and we are very proud of him stepping up in his district."

Stoffel was last year pictured with former Congressional candidate Angela Roman, a reported member of the Three Percenters, making the "OK" hand symbol, which has been co-opted by white supremacist groups. Other members were also photographed with Roman.

Skarlatos "says he supports Timber Unity and spoke at a rally it organized at the state Capitol in Salem," according to E&E News. He spoke at a Timber Unity rally before Republican lawmakers fled the state to prevent the climate bill's passage and was photographed alongside Perkins at one of the group's rallies, according to Jefferson Public Radio.

Conservation groups have alleged that Timber Unity has "mainstreamed extremism by allowing activists engaged in violent threats and conspiracy theories into the group," according to Willamette Week.

"By refusing to distance themselves from these parts of the movement," Oregon Wild said in a report earlier this year, "the Timber Unity leadership is simultaneously harnessing the energy of these extremist elements for their own benefit, while proclaiming that they are a legitimate representative of rural Oregon."

The group's leaders have pushed back on the reports. Parrish told Williamette Week that the reported ties were "outlandish" and "bogus."

"The assertion that Timber Unity members from poor rural communities are somehow privileged or 'supremacists' for fighting for their livelihoods," she said, "is simply proof that the Democratic majority in this state has completely abandoned the needs of the working class."

Parrish told the outlet that the group had reported at least one person who made problematic comments in its Facebook group to state police and insisted that she did not think "any" of its members "know what the whole QAnon thing is."

But sociologist Spencer Sunshine, who authored the Oregon Wild report, told Mother Jones that the group was "profiting off of an extremist space and refusing to distance from it while posing as mainstream organization."

"While Timber Unity has sought to downplay these links, an investigation of its social media channels has found extensive ties between its leaders and Far Right figures, as well as the use of racist, homophobic, Islamophobic and violent rhetoric by its supporters," he said. "The organization already has a history of and association with groups who have either made violent political threats or have supported violent actions."

Since the report was published, Timber unity has "heavily" moderated its online group "as best we can," Parrish told Salon in an email. "But we do have 64,000 members in a group. Just like Salon isn't responsible for the opinions of their readers or their comments on your page, nor are we responsible for the individual opinions of 64,000 other people."

Pedery agreed that "they have been a lot more aggressive in shutting down most (but not all) of the overtly racist stuff on their closed Facebook group, and they take pains to say they do not support violence."

But Pedery added that Stoffel remained on the board, and "their material continues to feature QAnon imagery."

"To the extent they have made changes," he said in an email, "I think they are cosmetic."

Parrish reiterated that the group does not tolerate bigotry.

"Our board is of mixed race/heritage, as are some of our children," she said. "As the daughter of an Arab immigrant, I've personally been subject to some pretty racist comments over the years, so we just don't tolerate it."

"As to Alek Skarlotos, we haven't endorsed his campaign," she added. "We're not set up to do federal endorsements. We do allow all candidates of any party to post once every Tuesday in our group, as Timber Unity is a non-partisan entity. That would include Congressman De Fazio if he wanted to avail himself to his constituents; he has chosen not to. We do appreciate Alek's positions on forest management and job creation compared to his opponent, but we're not weighing in on his campaign.  As a former eight-year Oregon lawmaker, I find his candor and energy refreshing. After 30-plus years of De Fazio, I think people in Southern Oregon are ready for someone new to represent them in Congress."

Pedery argued that Timber Unity was "essentially an arm of the Oregon Republican Party and their far-right donors in the logging industry."

"From the get-go, Parrish positioned Timber Unity as an umbrella under which a variety of far-right and rural grievances could be organized in support of Republican candidates and causes," he said. "They have started sending out mailers listing their candidate endorsements, and Republican candidates are displaying their logo prominently in their materials. The only [Democrats] they have endorsed are pro-fossil fuel export terminals, and pro-clearcutting."

Pedery said the group had "pretty clearly tried to glom on to any activism [or] political momentum it can find in right-wing politics in the state," which is why their rallies have featured so many extremist groups.

"Their goal has always been to try and weld all of this together into a rural-focused campaign to generate political support for far-right causes and candidates (and hate of anything that smacks of urban, liberal, Democrat, environmentalist, etc.), and to create support for Republican walkouts that paralyze the legislature," he added. "If anything, the Oregon GOP is worse. I think Timber Unity at least has Parrish trying to maintain a public image of non-racist, non-crazy people (even if she is perfectly happy to tolerate and even recruit those folks in private)."

After the publication of this article, Parrish emailed an additional statement refuting Pedery's characterization.

"Mr. Pedery walks a thin legal line in making libelous statements about members of our board to further an agenda that hurts the working families in our state. His allegations are downright shameful," she said. "Pedery would like to scare people into thinking his concerns are about race, but in reality, it's about denigrating people with whom he disagrees politically, and he'll use any tactic to do so.  Our board Secretary, Angelita Sanchez, is running for a city council race on a platform of stamping out racism in her community and our members are fully supporting her efforts. I'm proud of the Timber Unity members who attend truck rallies to save their jobs while also attending peaceful protests to support Black lives in Oregon. That's the real magic of our organization...we're here for anyone who wants to fight for their jobs, no matter what."

This article was updated with additional comments from Julie Parrish.