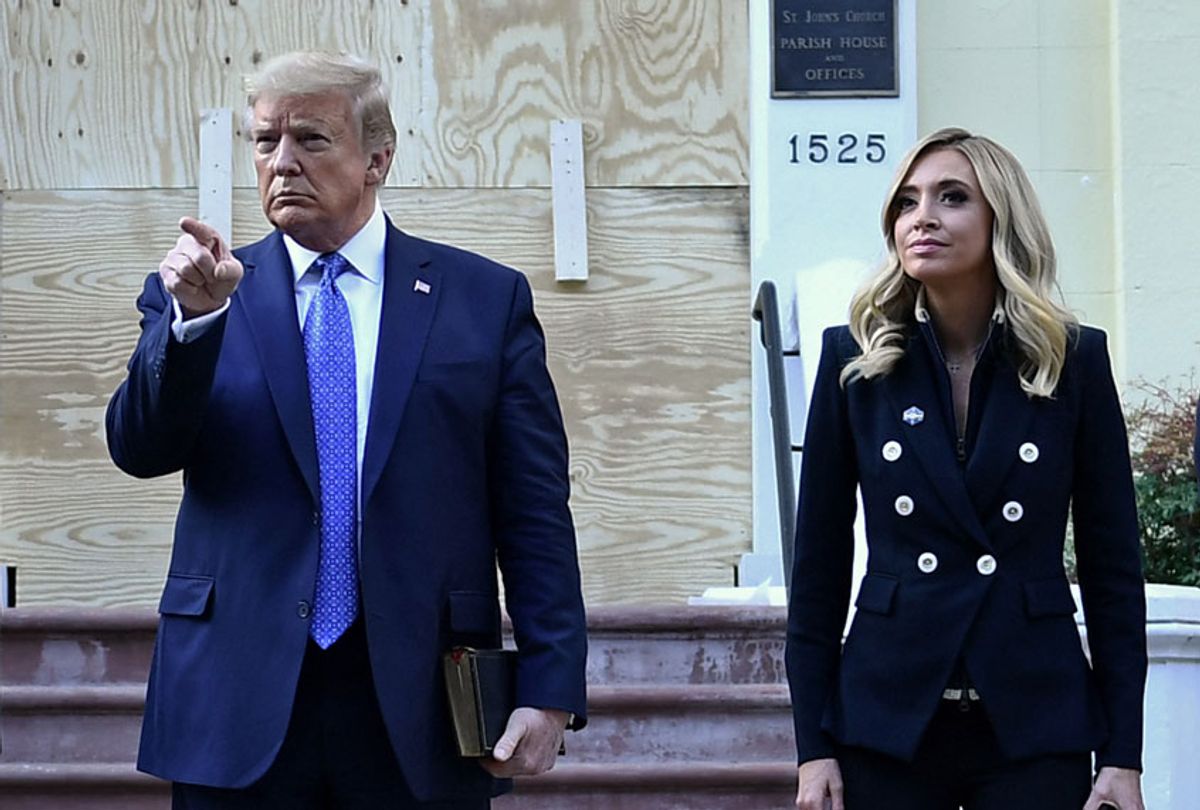 Before she warmed up to President Donald Trump, White House press secretary Kayleigh McEnany hailed former Vice President Joe Biden as a "man of the people" who was both "funny and likable." That wasn't all she had to say about the two nominees who are currently on the ballot.

Trump's press secretary recently blasted Biden as "a radical socialist." But McEnany said in an August 2015 radio interview newly surfaced by CNN that the former vice president resonated with "middle-class voters" more than Trump, whom she called a "tycoon." She also predicted that a Biden candidacy would pose "a problem" in a potential head-to-head matchup with the reality show billionaire.

"I think the Republicans run into a problem if it is Joe Biden and if it is maybe a Trump on the other side," McEnany said at the time. "Because Joe Biden — one of the things he is remarkable at is really kind of being a man of the people and resonating with middle-class voters. Feeling like — coming off as human. His gaffes — as much as we make fun of them — to a certain extent, they make him look human. So not, since he's likable."

McEnany also predicted that Republicans would have a harder time running against Biden than former Secretary of State Hillary Clinton.

"I think — at the end of the day, probably Joe. Although, if Trump is against Joe, I think the juxtaposition of kind of the man of the people and kind of this tycoon is a problem," McEnany said. "Although Donald Trump's remarkably coming off as a man of the people despite being this wealthy business tycoon."

Earlier that week, McEnany had predicted the "funny and likable" Biden would win the 2016 Democratic nomination.

"When you have Joe Biden here, who's funny and likable, and can resonate with the middle class — he really can speak to the average, everyday American, versus Hillary Clinton, who's cold and somber," she said. "Remember when she had to — that calculated move of drinking a drink at a bar to seem like a human being. Joe Biden is a human, and people will resonate with that. I predict he will be the nominee."

Biden never entered the 2016 field, and Clinton went on to win the Democratic nomination.

In a statement to CNN, McEnany claimed that what she characterized as Biden's "profound personal corruption" had since caused a change of heart. She added that the former vice president had become "an empty vessel for the liberal elites and far left" — a familiar Republican talking point which she had earlier repeated.

Trump and campaign surrogates have tried for more than a year to make widely discredited allegations of corruption stick to Biden. The campaign amped up those efforts when Trump personal attorney Rudy Giuliani planted a dubious story about the former vice president's son in The New York Post — an attempt at an "October surprise."

Alleged emails belonging to Biden's son have still not been independently verified, and multiple congressional and journalistic investigations have found no wrongdoing on the part of the former vice president.

Giuliani had already endeavored one year earlier to tarnish Biden with similar allegations, a plot which directly led to the impeachment of his client.