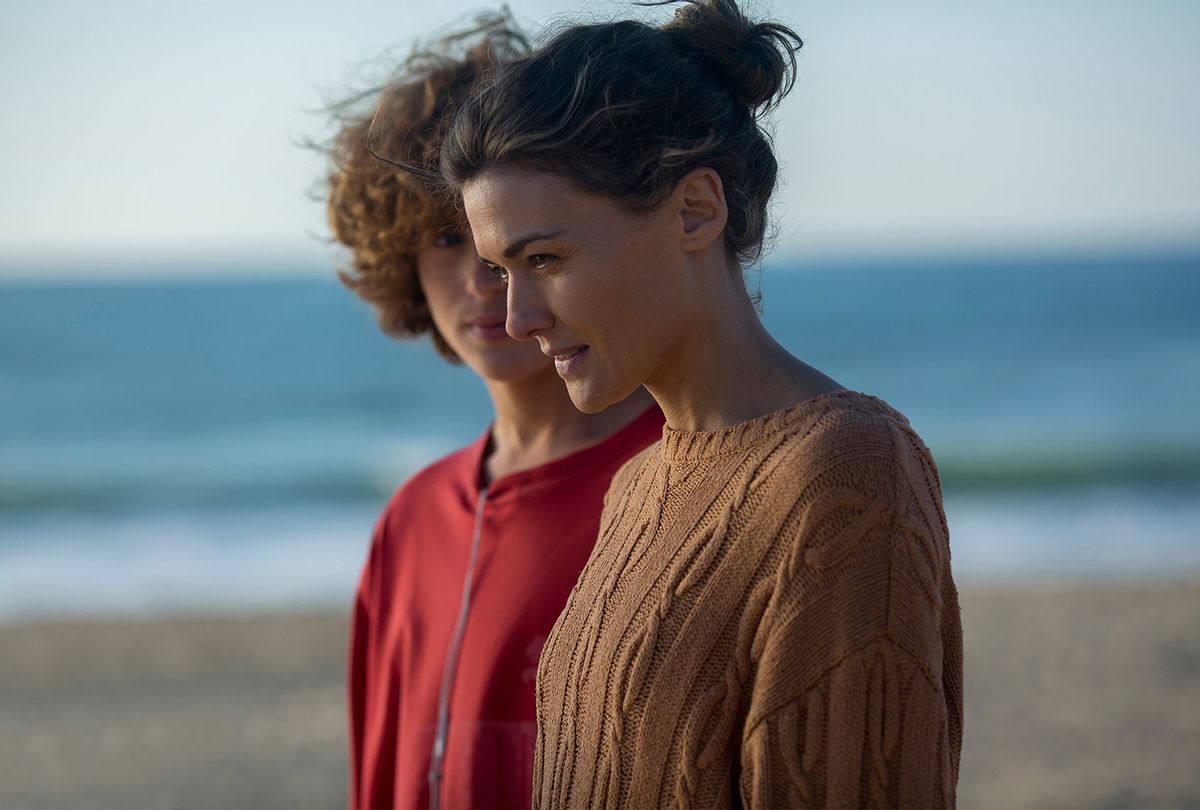 "Madre" is Rodrigo Sorogoyen's feature length drama, an extension from his Oscar-nominated short of the same name. The first 15 minutes of the film recreate the short, an intense, single-take scene in which Elena (Marta Nieto) in Spain receives a call from her 6-year-old son who is alone on a beach in France and in danger.

The new film cuts to 10 years later to explore the lasting impact that earlier episode had on Elena. She is now managing a bar/restaurant on the very French beach where her son disappeared. She is no longer with Ramon (Raúl Prieto), her son's father, but she is now with Joseba (Alex Brendemühl), a Spaniard who sees her when he can. Joseba takes care of the despondent Elena whom locals refer to as "the crazy woman" because of her despair at losing her son.

But one day, Elena spies Jean (Jules Porier), a teenager, and becomes fixated on him. Is he her son all grown up? Jean strikes up a conversation with Elena at her bar, and they become "friends." It is perhaps an inappropriate relationship, but it does allow Elena to work out some of her grief. "Madre" is captivating as the drama plays out, and Elena grapples with her feelings for Jean.

Sorogoyen chatted with Salon, with the assistance of Carlos Gutiérrez of Cinema Tropical about his feature film.

You based the feature on the short, which stemmed from a real incident that happened to a friend of yours. Most folks would expect the feature to be Elena looking for her son, but you cut to 10 years later to show the impact of her losing her son. Can you discuss why you took this approach?

We did it for several reasons. One was because of the type of film we wanted to make. My cowriter, Isabel Peña, and I had made a couple of thrillers — "The Realm" and "May God Save Us" — which were based more on the plot than on characters. We wanted to do something different. We have the impression that when you work on a thriller or a suspense film, you are more tied to the plot. Another reason was that the easiest would have been to play with what the audience expected. For me, as an audience member, when I encounter something I'm not expecting, that is always something positive. It would be normal to narrate precisely if she would find her son or not. But there are millions of films that have been made like that, and we thought it was boring to go that route. There are some very good films with that theme that we couldn't beat, and there's a lot of bad films that because they follow that need to go to a safe space, become commonplace, and we were not interested in that either.

The third reason was we wanted to do a freer film and talk about characters and the subject matter itself. We thought that talking about this woman who stays in the same place waiting, most likely in vain, for her son to appear was more interesting. We wanted to talk about her loss, but focusing on years later, rather than at the time when she still was hopeful to find that person. The most normal was that she wouldn't find her son, but nevertheless she's clinging to an impossible. And that's where the love story emerges. I also think it has to do with light. We wanted to make a film that even if it is unsettling, it starts in a dark place and goes into the light; it becomes more luminous. That's where the character of Jean comes in. It would be more complicated to make a thriller where a boy has disappeared unless he appears at the end, but we were not interested in that.

Elena makes a series of increasingly bad decisions, like getting in a car with three guys, or storming Jean's family's house. What decisions did you make regarding her character, her mindset, and her behavior?

It is always better to see someone who makes bad decisions, although I have issues with the term "bad" — "questionable" decisions is better. I don't agree her decisions are bad. We wanted to discuss her behavior and how people judge her. And it's very likely that she would be judged for what she's gone through, rather than for what she's doing. People might think that because she had a tragedy, that she's crazy. We were interested in talking about the stigmatization of madness, of how we quickly characterize someone as crazy, when actually she's hurt.

I might agree that when she storms the house that it is a bad decision, but it was the best thing she could do — she did it out of love, and the family didn't know what was going on. But, the sequence in the car wasn't a bad decision, but things turned badly. It's that morality I have an issue with — not going into a car with three guys who you're having a good time with, but rather we wanted to show the audience the morality of what is good or bad beyond the action itself.

It was a fun and interesting process how to visually incorporate a short into another story and does not feel imposed, based on the fact that both films were shot in two different moments and the story itself is about a disruption. Something very tragic happens to her, and it is very radical, and it happens in the first minutes of the film. I came up with shooting scenes in a similar way to the short, where the character of Jean is present, that is, that the memory of Elena's son is also present. For scenes with Jean, we used a Steadicam — the same way as the short — and it's choreographed with some gentle movements, like a dance, versus when Jean was not in the scene. We shot those sequences with practically no camera movement. We used a fixed camera with a tripod, and pan shots, symbolizing, in a way death, or rather the living death that this woman is experiencing. We used angular shots. When Jean is there there's more movement, like in the short film. Jean's scenes all have tracking shots with maybe a few small inserts.

The short is full of ambiguity; it prompts viewers to consider what may or may not be happening. The feature, likewise, is full of ambiguity. There are multiple ways to read various scenes and situations. Can you talk about playing with reality and perception?

Making a film of this kind gave us a chance to play with ambiguity. We didn't want to explain everything. In a conventional thriller, that is harder to do. The biggest ambiguity is that we never learn what happened to the kid in "Madre," and that generates an interesting mystery. This type of mystery has to be organic, otherwise is worthless. So, it makes sense that she doesn't talk about what she knows — which is not too much — and obviously she won't also talk about what she doesn't know. We found it very potent and tragic that the mother doesn't know what has happened to her son, which is actually what happens in 95% of the cases of people who disappear. And that's the horrible aspect of it, that you don't know what happened, and that's a very powerful sensation because you can't say goodbye or have closure, unlike when someone dies. We wanted to transpose that to the small details, like the love story between Jean and Elena. We always get asked, "What do they both feel for each other?" We found it boring and fake to put that into words. That continues with the sense of mystery that I think makes the film more interesting.

It is facile to project Elena's relationship with Jean as simple surrogacy/substitute son. He represents more to her, and she is very important in his life. What observations do you have about the nature of their relationship?

There's certainly surrogacy, the wish that she wants him to be her son despite the fact that he is not, but also there's some charm between them, and obviously eroticism as well, but we wanted to keep it subtle. I find it very interesting that each viewer has his own interpretation and projects differently. Some say they are in love, they have a romantic story, and they consummate their love in the last sequence. There are other viewers that say the opposite, that is a silly thing and impossible, and that she only wants to take care of him. But we wanted to leave it open because that's how it works in love stories; someone falls in love, and that romance can have lots of eroticism, none, or can be intermittent.

What about Elena's boyfriend, Joseba, or even her ex, Ramón who shows up in one pivotal scene, which is my favorite? In their interactions with her, they handle her with kid gloves.

I love that scene too, it's my favorite scene. They are certainly both very different relationships. Ramón's story is told very little and is surrounded by mystery because it's marked by tragedy. That's why it's a very important scene, because we want to show that they have already said everything, and they had not seen each other for a long time. He is a key character for Elena because he gives her the chance to forgive.

The relationship with Joseba, was also very important to us. It was key for Elena to have a partner. Isabel and I wanted to shape this character as an older man, a kind of doctor who can help Elena heal. Some viewers judge him badly, but others think he's a great guy who has infinite love for her and is only there to take care of her. To the people who say he's caring, I remind them he is a bit controlling. To the people who see him badly, I say that he's taking care of her.

There are several moments where Elena is referred to as crazy. Can you talk about walking that fine line?

It was a tightrope. We were attracted to the fact that as society we easily use those words — "you're crazy," "she's crazy" — but it is a very serious illness, and we don't take it very lightly. So, this woman is and has been unstable. My opinion is that we don't see that because it was years before. But it might be this is the first time that she's feeling things she's never experienced before, and those are positive changes for someone who has been so hurt. She has received a lot of care from Joseba, but she's now feeling something else. She's actually probably more stable these days. She probably didn't have deep personal connections before and suddenly she now wants to have a deep relationship. We wanted to navigate these issues with respect and care and honesty. It was important for us not to treat Elena as a crazy person, because once you cross that line, you lose the justification for any action, because you can then do anything you want.

"Madre" is available in virtual theaters and streaming on Oct. 30.