Trump lost the election. He can still make the pandemic worse by undermining the vaccine

An effective vaccine now seems imminent. Will Trump and his followers sabotage it in one last act of revenge? 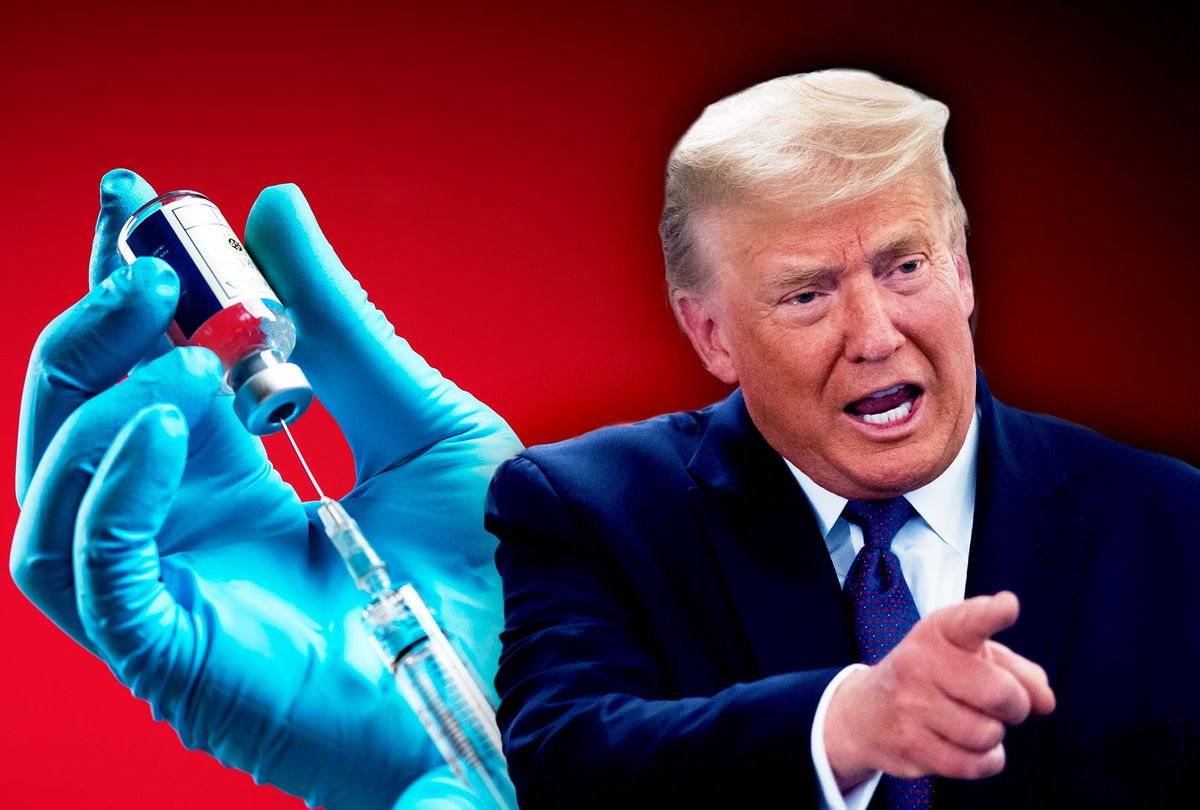 These past few days are full of so much good news that the majority of Americans who aren't on board the Trump train, traumatized by a hellish year, are struggling to believe it's real. First, Joe Biden's victory in the 2020 election was cemented over the weekend, both because the networks called the election and because the series of frivolous lawsuits Trump filed to steal it are failing in court. On Monday morning, as most Americans were barely recovering from their emotional and sometimes literal hangovers, the pharmaceutical giant Pfizer announced that early results show that its coronavirus vaccine is more than 90% effective at preventing COVID-19 in trial patients. (This information comes from a press release, not an independent study. It's promising but not conclusive.)

By no means does this mean that the coronavirus pandemic is over, much less that, as Trump angrily promised on the campaign trail, after the election, "you won't hear about it anymore."

On the contrary, the pandemic was second only to the drawn-out election results in the headlines over the weekend, as case rates soared to more than 100,000 positive diagnoses a day and Biden announced the formation of a coronavirus task force that begins work Monday morning. Pfizer's announcement of a possible vaccine only makes clear that the pandemic will be the main national concern for the next few months, defined by the rising caseload and the ongoing need for efforts to contain and control it.

Those efforts, unfortunately, are likely to be undermined by Donald Trump and his hardcore fans, like every other effort to control the pandemic. Within moments of the Pfizer announcement, conspiracy theories started to spread on social media, accusing the German pharmaceutical corporation of delaying the announcement in order to damage Trump's chances for re-election chances. Donald Trump Jr., a major conduit for misinformation, was on this right out of the gate:

Sure enough, Fox News immediately picked up the baton, calling the timing of the announcement "curious."

There is, needless to say, no evidence for these conspiracy theories. This announcement fits right in the timeline that scientific experts have been giving us for months, which is that trials would be ending in early to mid-November.

The "timing" conspiracy theory makes even less sense when you consider that while the election results were not entirely clear until Saturday, the last votes were cast on Tuesday, six days before this announcement. In addition, most voters cast their ballots well before that deadline. There's also no real reason to believe a vaccine announcement was a magic bullet that would have saved Trump's campaign. Yes, he would have taken credit for it, and might well have implied he had a direct hand in developing it (which of course he didn't.). But there's no reason to think anyone would have believed him.

This entire conspiracy theory makes even less sense when considering what would have happened if Trump had won the election instead of Biden: Pfizer would have announced its vaccine results anyway.

At that point, the Trumpian narrative would likely have been jubilant instead of paranoid, treating this announcement as some proof of the greatness of Making America Great Again, rather than as proof of some imaginary conspiracy against him. Since the same set of actions — announcing a vaccine in the second week of November — would have had wildly divergent meanings to Trump supporters depending on the election results, we can safely say this is less about Pfizer's choices than about the Trump machine trying to turn every news story, large or small, into a reflection of the alleged glory of the orange-tinted half-literate grifter they all bafflingly worship.

But here we are, in the space where Trump and his followers are bitter and paranoid and the vaccine announcement is being processed through those feelings, instead of feelings of triumph. Unfortunately, that means it's entirely possible that, with two months left in Trump's one and only term of office, he will do real damage to the effectiveness of this potential vaccine.

After all, this is the same man who saw widespread virus testing as a plot against him and used his power to interfere with this necessary public health measure — while bragging about it. He may be trying to take credit now — even though Pfizer's vaccine was not part of the administration's program — but it's almost inevitable that Trump will start to view this vaccine, as he views everything else, as some kind of attack on him.

That could definitely be a problem. Pfizer claims it will have enough data to apply for an emergency authorization to distribute the vaccine later this month, and will have enough doses to immunize 15 to 20 million people by the end of the year. Those numbers may be overly rosy — again, this is all coming from a press release, not a scientific paper — but if it pans out, that means the company will need to work with the Trump administration, at least for the initial rollout. In case you hadn't noticed, Trump is only worried about his ego and the plots against him he sees everywhere, and not at all about the health of the American people. If anything, he's probably furious with the whole country for refusing to re-elect him.

There is a good chance, of course, that Trump will be too busy to interfere with the vaccine, distracted by pointless lawsuits against local election officials and his efforts to rake in as much cash as possible before leaving office. Or that Biden will take over management of the pandemic quickly enough that there won't be much Trump can do to cause real or lasting damage.

Still, the mere fact that these conspiracy theories are starting and being amplified by the president's No. 1 troll-son — and it's only a matter of time before Trump himself gets involved — is alarming. After all, this is the guy who was able to politicize mask-wearing and social distancing, encouraging conservatives to reject both, which almost certainly contributed to the rampant spread of the coronavirus across the country.

In light of this, there's a real danger that conservatives will view the vaccine with similar suspicion. Republican voters were already more likely than Democrats to be wary of a potential vaccine, and that was back when Trump was promising them one by Election Day. If they are persuaded by Trump and Fox News to see this as a "Biden vaccine," it's entirely possible many of them will refuse to be vaccinated.

As tempting as it is to say that these folks deserve COVID-19 if they're going to be so foolish about it, the reality is that if we want to stop the pandemic, vaccination needs to be widespread. The more people refuse, the slower the return to normal will be. Trump spent most of the past year whining about lockdowns and demanding an early "reopening" of the country. Perhaps the final irony is that he'll end up being the biggest obstacle to that actually happening.